Explicit photos and videos of unsuspecting women have been leaked to the website, which MailOnline has chosen not to name.

The site has categorised women by the town, cities and counties they live in then included subcategories with their names.

The images and videos are then easily shareable by users.

The site has categorised women by the town, cities and counties they live in then included subcategories with their names

Mikala Monsoon, 23, from Glasgow, discovered her photos were on the site after being sent a link by an old school friend.

She told Metro someone uploaded intimate photos of her when she was 17 and they have resurfaced online over the last six years.

Ms Monsoon has since changed her name and moved away from her home in a bid to escape.

She told metro.co.uk: ‘I’ve been so mortified, upset and anxious but now I am just angry. I’ve done my best to separate myself from it but last Wednesday I got a message from a girl I went to school with. She told me I was on this website.

‘The whole thing is appalling. So many people are driven to such anxiety and a lot of people are finding out about the pictures for the first time. They’re in deep pain.’

Ms Monsoon reported the site to police in Glasgow last week, but it is still live with all the pictures freely available to download.

The offence of disclosing private sexual images without consent became illegal in 2015 in England and Wales, and carries a maximum sentence of two years. 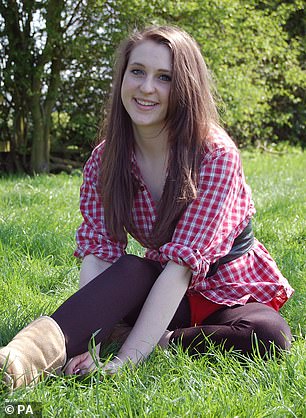 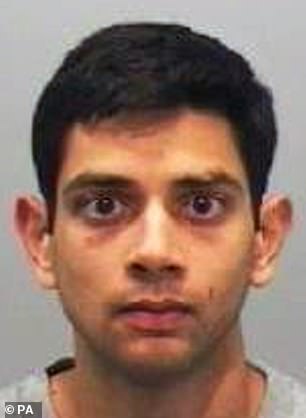 Alice Ruggles, 24, (left) was murdered by her former boyfriend Trimaan Dhillon (right) in 2016 after he broke into her flat in Gateshead, Tyne and Wear. Dhillon had threatened to share images of Miss Ruggles online

Police Scotland confirmed the incident has been reported and ‘enquiries will be carried out’.

Figures obtained from 19 police forces by the BBC under freedom of information laws show that since 2015, the number of cases investigated by police has more than doubled from 852 to 1,853 in 2018/19.

However, in the same time period, the number of charges has dropped by almost a quarter – from 207 to 158.

In the last year, more than a third of victims decided not to proceed with the case.

Campaigners believe this may be because they are not granted anonymity and face having personal details disclosed during any potential court proceedings.

They have also warned that simply threatening to share images should also be classified as a crime.

It comes after Alice Ruggles, 24, was murdered by her former boyfriend Trimaan Dhillon in 2016 after he broke into her flat in Gateshead, Tyne and Wear.

Dhillon had threatened to share images of Miss Ruggles online.

Her mother, Dr Sue Hills, believes her daughter may have sought help sooner had Dhillon not first threatened her with releasing the photographs.