A photo showing a smiling former death row inmate with a #VOTED sticker on his forehead has captured the social media spotlight.

Anthony Hinton spent 28 years on Alabama’s death row before his release in 2015.

The group that helped free him, Equal Justice Initiative, tweeted the picture with the message, ‘For 30 years, Mr. Hinton was stripped of all his rights while he sat on Alabama death row for a crime he didn’t commit. Today, he arrived at the polls at 7am and exercised his right to vote.’

The post has been retweeted and liked thousands of times.

She said he wore the sticker on his forehead so no one would miss it.

Anthony Hinton spent 28 years on Alabama’s death row before his release in 2015. He is seen above after casting his ballot and voting in Montgomery, Alabama on Tuesday

The photo went viral, with social media users praising Hinton for his ‘strength, determination, and defiance’ 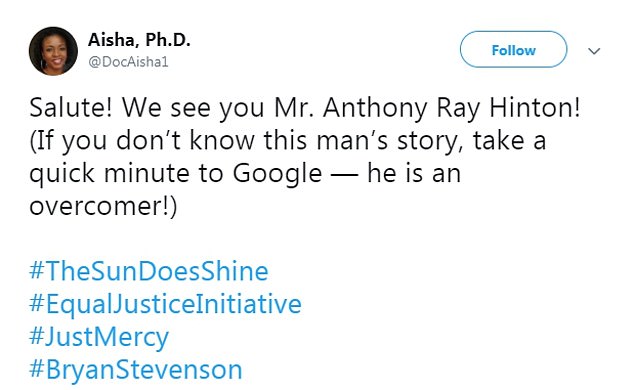 ‘The joy on his face! Omg you know he’s the best guy at a party,’ tweeted Jennifer Bene 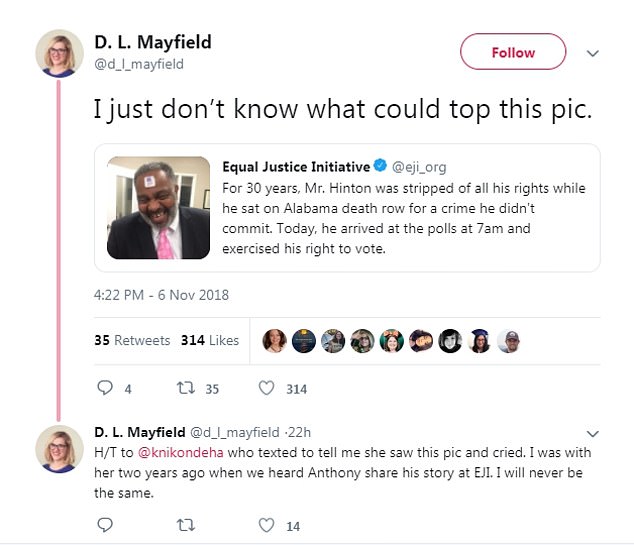 ‘I just don’t know what could top this pic,’ tweeted D.L. Mayfield 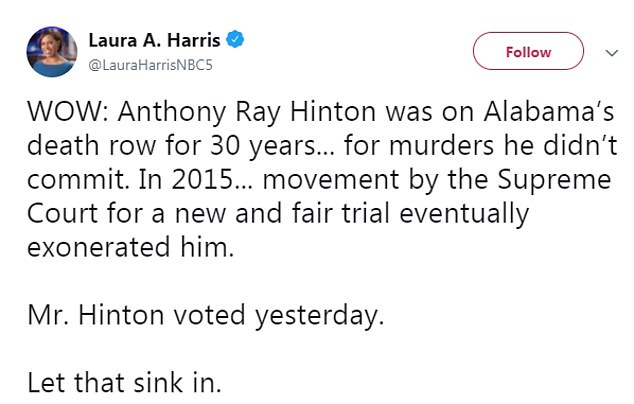 Hinton was released after new ballistics tests contradicted the only evidence against him.

He spent 28 years on death row for two 1985 murders that occurred during separate robberies of fast-food restaurants in Birmingham.

He was set free in April 2015 after new ballistics tests contradicted the only evidence – an analysis of crime-scene bullets – used to convict him decades ago.

Hinton was arrested for the two 1985 murders after a survivor at a third robbery identified Hinton in a photo lineup – even though he was clocked in working at a grocery store warehouse 15 miles away. 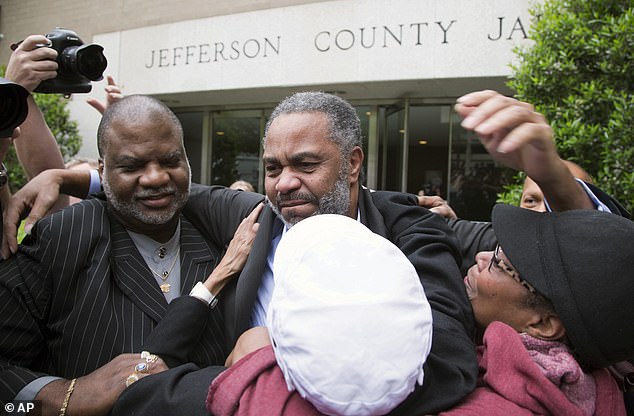 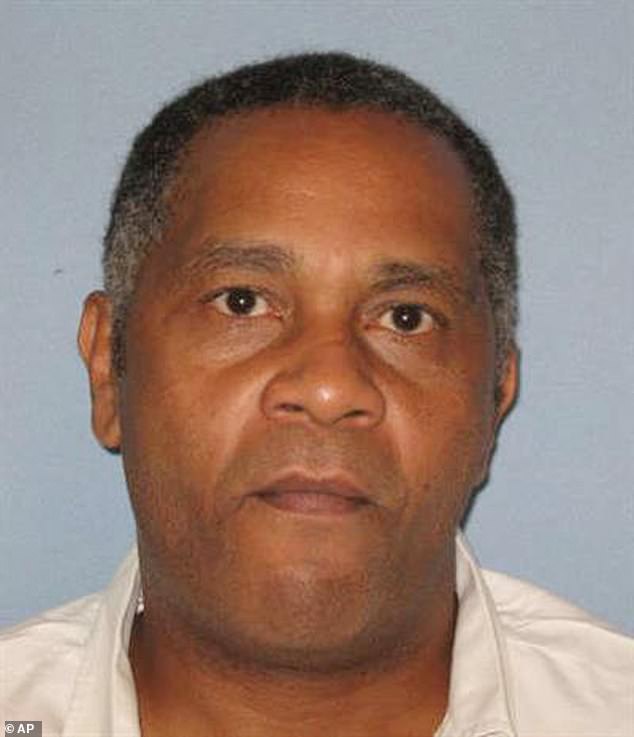 He was convicted of two murders which took place after two separate robberies of fast food restaurants in Alabama in 1985. Hinton is seen above in an undated mug shot

There were no fingerprints or eyewitness testimony, but prosecutors said at the time that bullets found at the murder scenes matched a .38-caliber revolver that belonged to Hinton’s mother.

The defense expert was obliterated on cross-examination as he admitted he had trouble operating the microscope.

Attorney Bryan Stevenson, director of the Alabama-based Equal Justice Initiative, who took up Hinton’s case 16 years ago, said an independent analysis showed the bullets didn’t come from the gun, and fought for years to get the state to take another look at the case. 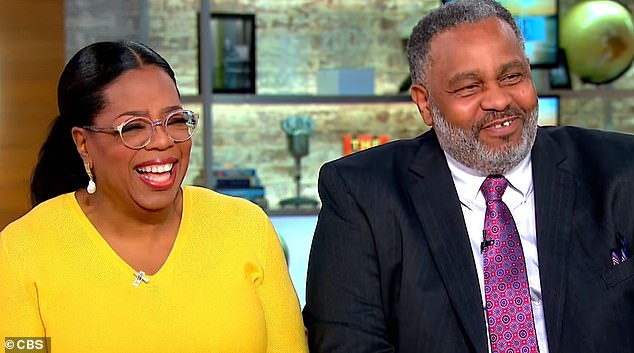 Earlier this year, Oprah Winfrey (seen left with Hiton on CBS This Morning on June 5) selected his memoir, The Sun Does Shine: How I Found Life and Freedom on Death Row, for her book club

A breakthrough only came when the U.S. Supreme Court ruled Hinton’s defense was so deficient that it was unconstitutional.

Prosecutors dropped plans for a second trial when three state forensic experts couldn’t determine if any of the bullets were fired through the revolver, or even from the same gun.

‘They took half my life and it’s like they didn’t care. They were willing to kill an innocent man,’ Hinton said.

‘Thirty years ago, I had a judge that stood up proudly and sentenced me to death. I had a prosecutor who couldn’t wait to get in front of a camera and say that they had took the worst killer off the streets of Birmingham. But come April 3, no judge was willing to say Mr. Hinton we apologize for the mistake that was done. No D.A. was there to say we apologize.’ 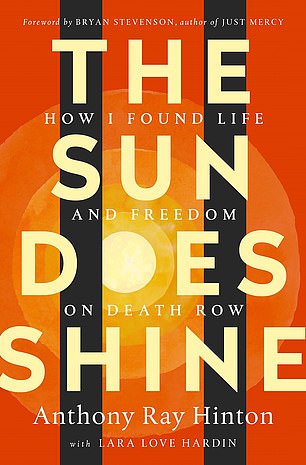 Winfrey’s book club has created dozens of best-sellers and within hours of her announcement The Sun Does Shine was No. 1 on Amazon.com

During Hinton’s 28 years on death row, dozens of inmates, men he came to view as family, were executed either by Alabama’s ‘Yellow Mama’ electric chair or by lethal injection.

‘The generator would kick in when they pulled the switch. The lights would dim on and off,’ Hinton said. Alabama for years traditionally performed executions at midnight.

Hinton’s luck began to change after his release.

Earlier this year, Oprah Winfrey selected his memoir, The Sun Does Shine: How I Found Life and Freedom on Death Row, for her book club.

‘The biggest surprise was being charged with a crime I didn’t commit,’ he said.

Winfrey’s book club has created dozens of best-sellers and within hours of her announcement The Sun Does Shine was No. 1 on Amazon.com, displacing the Bill Clinton-James Patterson thriller The President is Missing.