Three people have been killed and four others rushed to hospital after a triple-crash in Scotland.

Emergency services rushed to the mass pile-up on the A90 between Aberdeen and Dundee at Glenbervie.

More than 20 firefighters arrived and had to cut four people free from their vehicles as those injured were airlifted to hospital.

Police described the crash, between a coach, a Renault Megane and a Ford B Max, as ‘serious’ as the commuter route was shut in both directions.

The collision happened on the A90 between Aberdeen and Dundee at Glenbervie, Police Scotland said 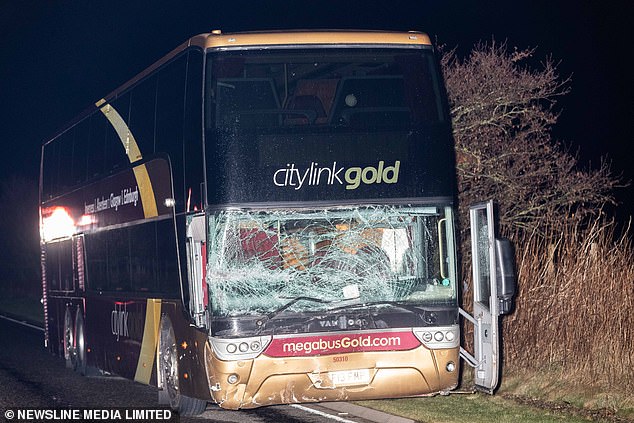 Police described the crash, between a bus and two, cars as ‘serious’ as the commuter route was shut in both directions

The bus driver suffered minor injuries but none of the coach passengers were hurt during the crash.

Motorist Jillie Aitchison, 45, who stopped to give first aid at the scene, told Northsound radio: ‘It was absolute carnage.

‘I stopped my car along with other first aiders to help.’

A police spokesman said the southbound carriageway had been ‘obstructed’, according to the Evening Express.

She said: ‘We received the call at 4.40pm regarding a collision on the A90 north of Laurencekirk.

‘The road is currently closed in both directions and diversions are in place via the A92.

‘The public are advised to avoid the area and seek an alternative route. 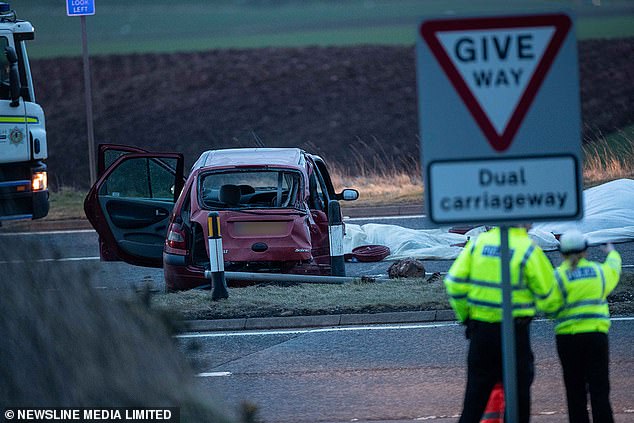 Road policing chief inspector Stewart Mackie said: ‘This has been a challenging incident for the emergency services to deal with and my thoughts are with the families of all those affected by this.

‘I would ask that anyone who witnessed the incident and who hasn’t already spoken to the police contacts officers on 101 using reference number 2576 of March 12.

‘The road is anticipated to remain closed for some time to allow collision investigation to take place.’

An image emerged showing the smashed windscreen and dented front of a Citylink Gold coach.

Diversions were put in place via the A92. The closure of the dual carriageway was thought to have delayed Aberdeen fans travelling to Glasgow for last night’s Scottish Cup quarter-final replay against Rangers.

A Scottish Citylink spokesman said: ‘One of our coaches travelling from Glasgow to Aberdeen was involved in a serious multi-vehicle accident this afternoon on the A90 near Glenbervie Junction. Our immediate thoughts are for those involved in the incident.

‘Safety is our absolute priority and we will assist police with their inquiries into the circumstances.

‘There were no reported injuries to passengers travelling on the coach and they were provided with alternative transport to take them to Aberdeen bus station.’

A spokesman from the Scottish Fire and Rescue Service said: ‘We received the call at 4.29pm about a collision between three cars and a bus.

‘We have five appliances on the scene at the junction with Glenbervie and Drumlithie on the A90.

‘We have 25 firefighters there in total.

‘This included a heavy rescue unit. Four people have been cut free from vehicles.’