The combined lifestyle of just three typical Americans is enough to kill another human being, according to a new study.

Assuming that emissions continue to increase on their current high path, the study, found that there are 2.26×10-4, or 0.000226 premature deaths per metric ton of carbon dioxide emitted above and beyond 2020 rates.

Essentially, that means for every 4,434 metric tons of CO2 produced beyond current rates, one person is killed.

The average American churns out about 20 metric tons a year, so to hit that 4,434 threshold would take about 225 years—or three additional 75-year lifespans.

‘Based on the decisions made by individuals, businesses or governments, this tells you how many lives will be lost, or saved,’ R. Daniel Bressler, a researcher in sustainable development at Columbia University’s Earth Institute, said in a statement.

Coining the phrase ‘the mortality cost of carbon,’ Bressler quantified ‘the mortality impact of those decisions,’ he said. ‘It brings this question down to a more personal, understandable level.’

The research was published last month in the journal Nature Communications.

That’s quite deadly compared to the global average of killing just .08 people per capita.

In the UK, it would take the current emissions of nearly 10 people (9.4 to be precise) to produce the same amount of ‘excess mortality,’ according to the statement, as compared to 25.8 Brazilians and 146.2 Nigerians. 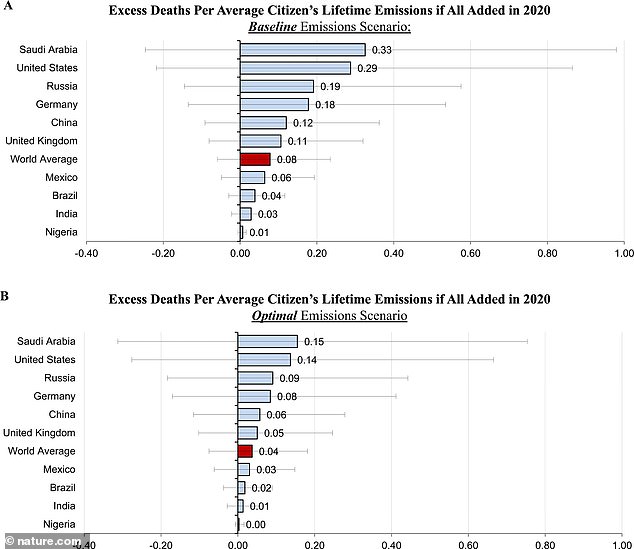 Americans aren’t alone with their deadly carbon footprint, though: According to Bressler’s analysis (top): Saudi Arabians could kill 0.33 people per capita. It would take the lifetime CO2 emissions of 146.2 Nigerians, however, to do someone in

Americans aren’t alone with their deadly carbon footprint, though: According to Bressler’s analysis, Saudi Arabians could kill 0.33 people per capita, with Qatar, Kuwait, the United Arab Emirates and Australia hitting similar numbers.

Researchers have been decrying the long-term effects of carbon dioxide and greenhouse gasses, in both economic and health terms.

But those estimates tend to be on the macro level – how many millions of lives or acres of trees will be lost.

Economist William Nordhaus won a Nobel prize in 2018 for examining the ‘social cost of carbon,’ which looks at the financial burden of reducing emissions as compared to the cost climate change effects will inflict.

Bressler praises Nordhaus’s research but says it misses the impact on mortality rates, which has seen an ‘explosion of research’ lately, he told The Guardian.

Factoring those mortality figures in, Bressler bumped up the cost of carbon more than 600 percent, from $37 per metric ton to $258. 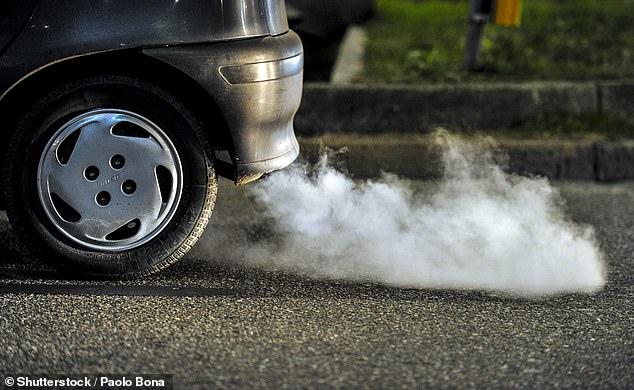 Bressler admits his numbers are only based on direct temperature-related deaths, such as by heatstroke—ignoring fatalities from starvation, drowning, wars or infectious diseases. ‘The number could be lower but it could also be a lot higher,’ he told The Guardian.

Adding 1 million metric tons to the 2020 baseline emissions—equal to the annual output of an additional 216,000 passenger vehicles, 115,000 homes, or 35 commercial airliners—would kill 226 people.

Bressler based his formula on the assumption that, based on rising emission trends, by the year 2050 average temperatures will surpass 3.8 Fahrenheit above what they were before the Industrial Revolution, ‘the largely agreed-upon limit after which the worst consequences of climate change will kick in.’

The study predicts that by 2100, temperatures would reach 7.4 F higher, resulting in some 83 million additional deaths.

Bressler admits his numbers aren’t exact, and there’s always the chance world governments could make a major U-turn in the coming years. 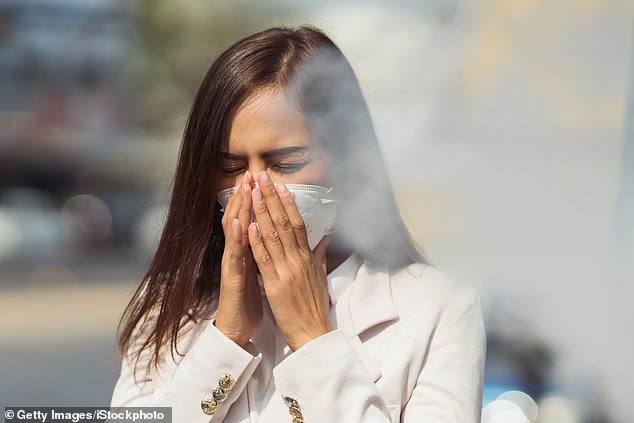 The study predicts that by 2100, temperatures will reach 7.4 F higher than pre-industrial rates, resulting in some 83 million additional deaths

But he only factored direct temperature-related deaths, such as by heatstroke—ignoring fatalities from starvation, drowning, wars, infectious diseases and numerous other indirect results of rising temperatures.

‘I was surprised at how large the number of deaths are,’ Bressler told The Guardian. There is some uncertainty over this—the number could be lower but it could also be a lot higher.’

In April 2021, the International Energy Agency predicted carbon dioxide emissions would swell by the second-highest increase in history, as manufacturing and shipping resume in the wake of the pandemic.