At least three people were killed and 12 others injured last night when a gunman opened fire at a Christmas market in Strasbourg, northeastern France.

Police are today hunting for the attacker, identified as a 29-year-old local man on a security watchlist, who fled the scene in a hijacked taxi having been wounded in a shootout with soldiers. President Macron raised the country’s terror level as the manhunt continued.

The carnage unfolded just after 8pm local time outside the historic Christmas market in Strasbourg’s central square, Place Kleber, one of the busiest areas in the city, which is also home to the European Parliament.

Four of those injured are still fighting for their lives, with six others seriously hurt, the mayor of Strasbourg, said on Wednesday morning. Witnesses described one of the victims as a a male South-east Asian tourist who had been shot in the head.

Passers-by tend to victims in the immediate aftermath of the attack on a Christmas market in Strasbourg, France, last night 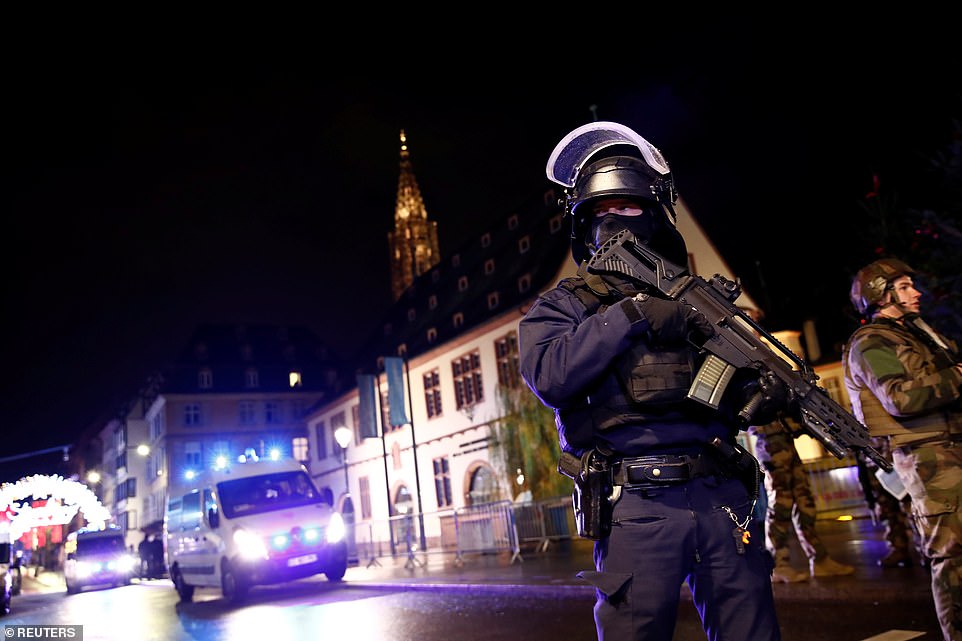 Police identified the gunman as Cherif Chekatt, a Strasbourg-born 29-year-old who has a criminal record and is a designated ‘threat to the state’ on the security services watchlist.

Chekatt was identified by DNA and CCTV images, sources told French media. Police had initially gone to his home earlier on Tuesday to arrest him over an unrelated armed robbery, but found him missing. Reports said grenades were discovered at his home.

Soldiers patrolling the area as part of regular anti-terror operations exchanged fire with the suspect and wounded him, but could not stop him escaping, police sources said. A soldier was slightly injured by a ricohet from a shot by the gunman.

The driver of the hijacked taxi, who escaped unharmed, told police Chekatt was injured during his escape

Some 350 people, including police, troops and helicopters were on the heels of the attacker who had ‘sowed terror’ in the city, Interior Minister Christophe Castaner said. 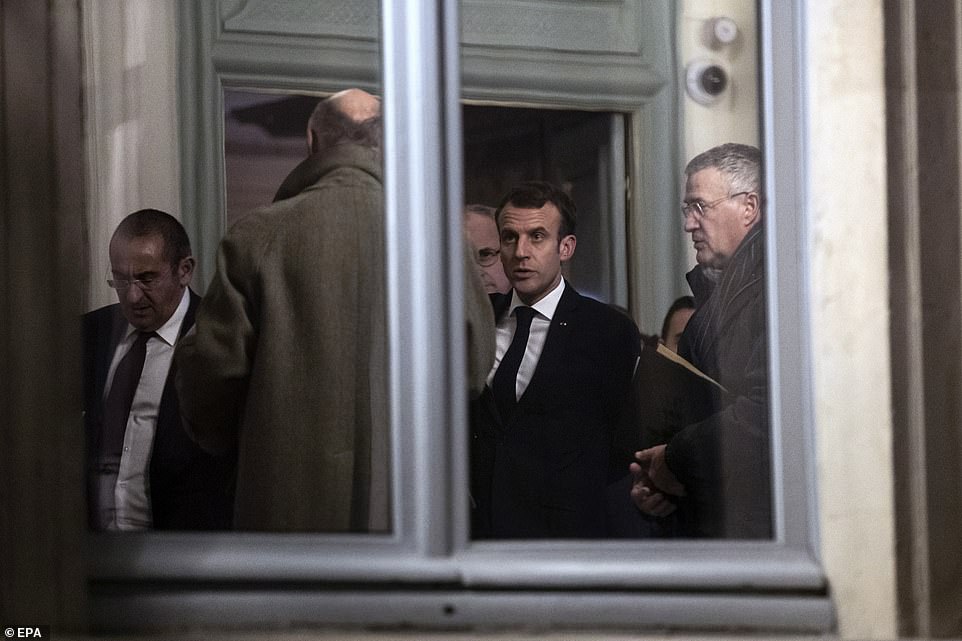 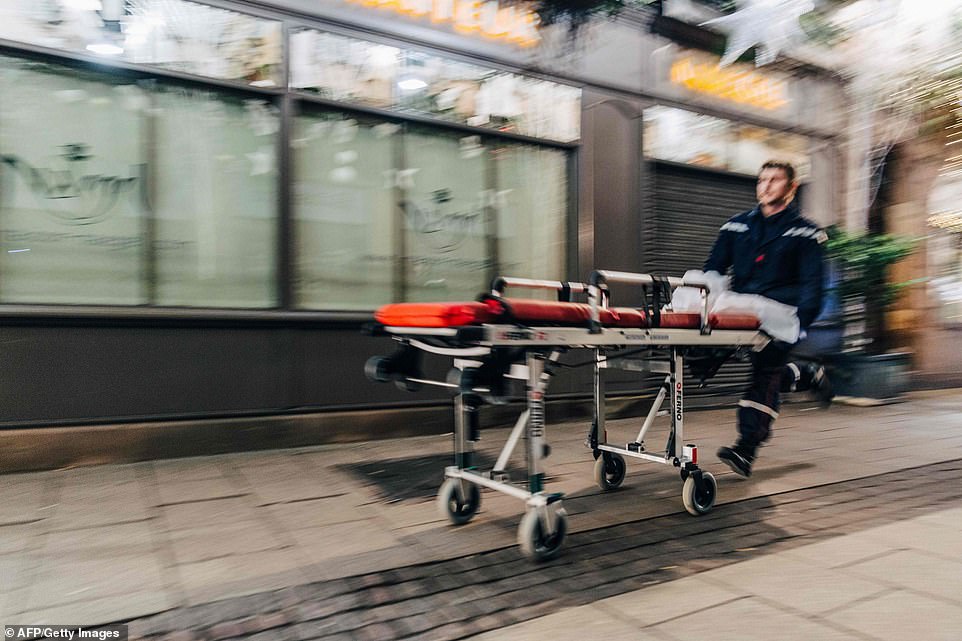 An emergency worker was pictured running with a stretcher towards the scene of the shooting, which killed at least three 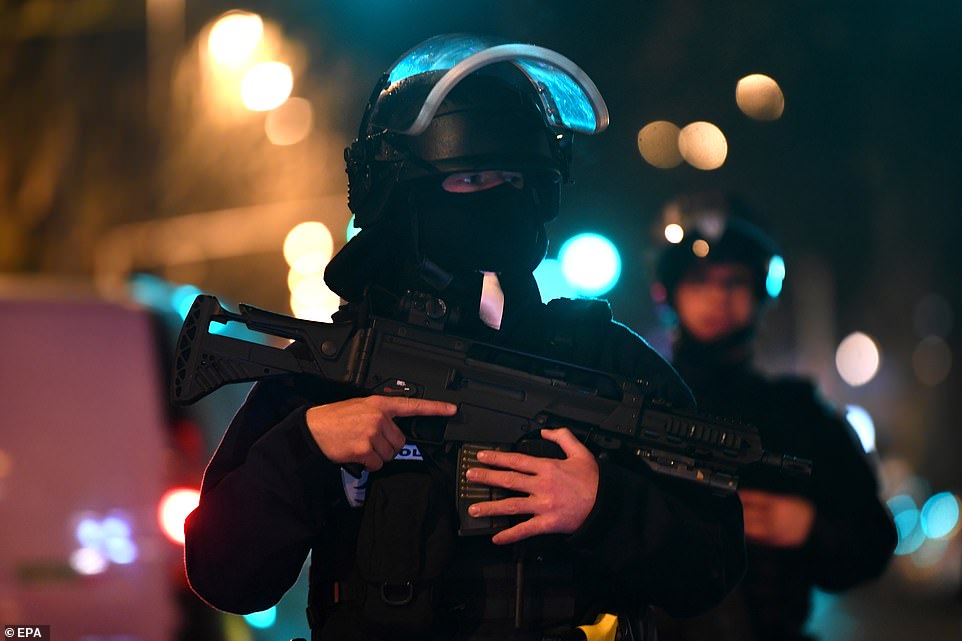 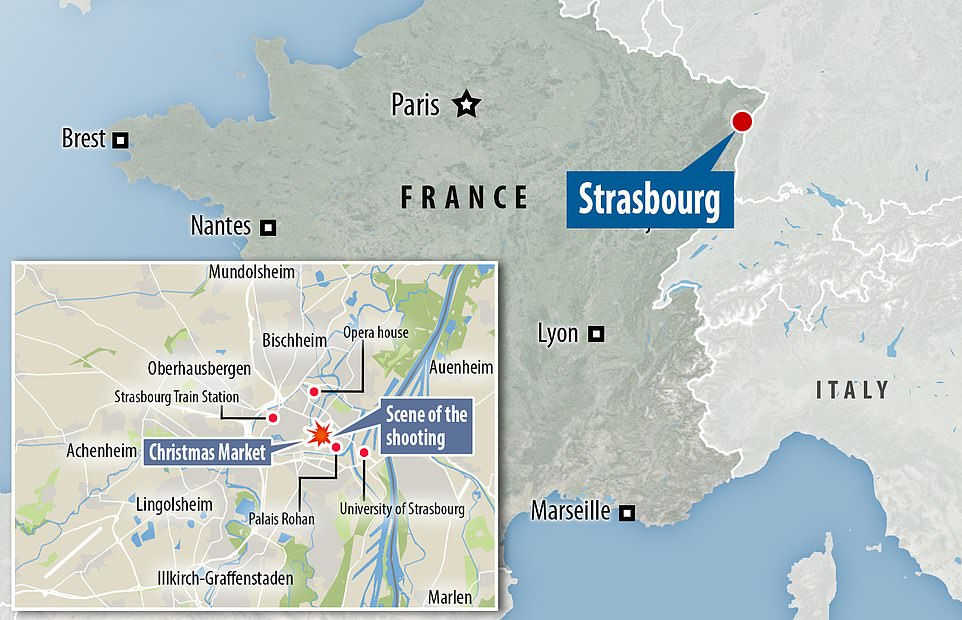 The map shows the area where the attack took place, while the Christmas market is shown in a file picture before the shooting 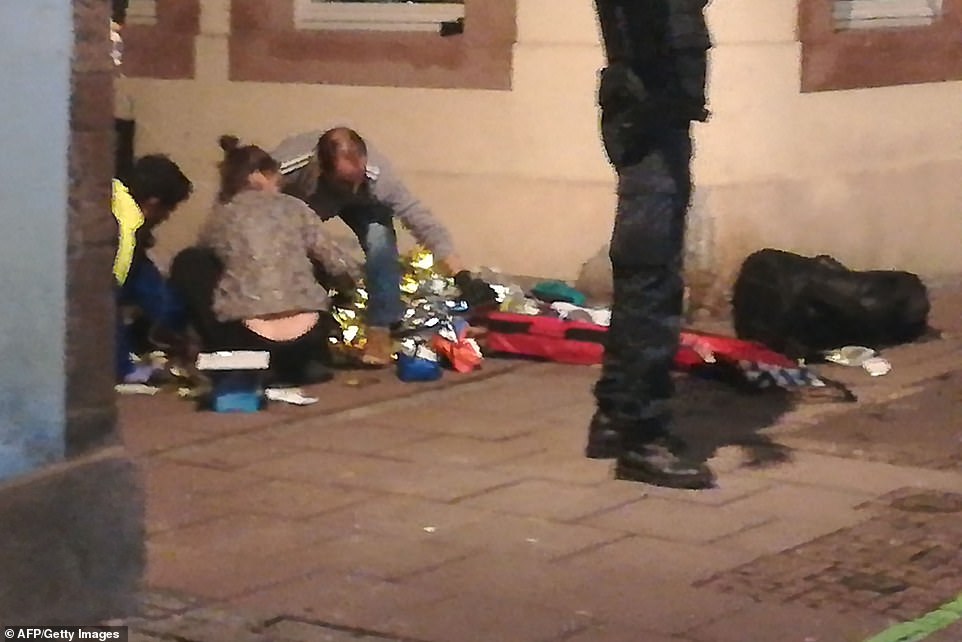 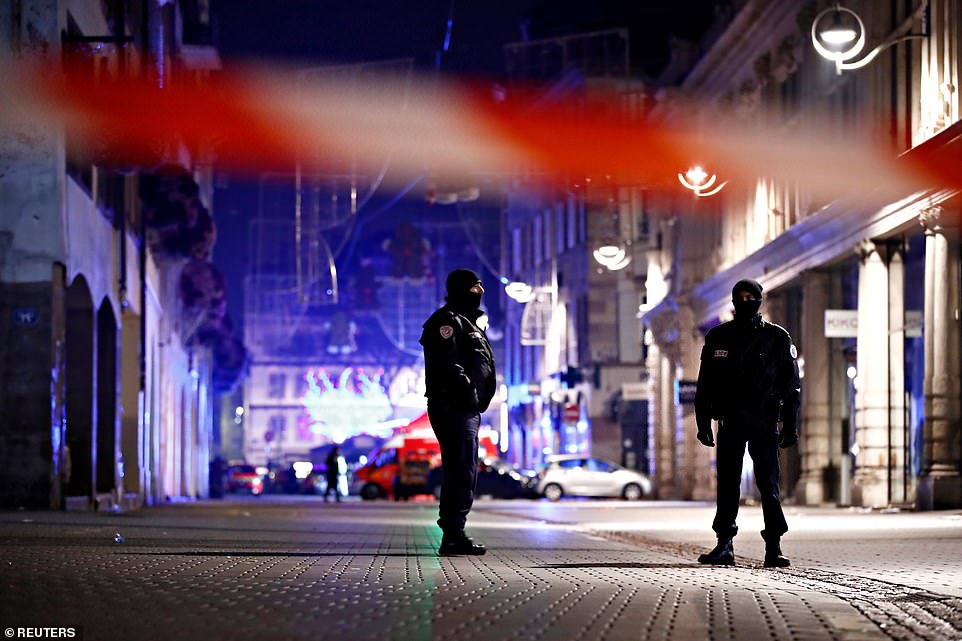 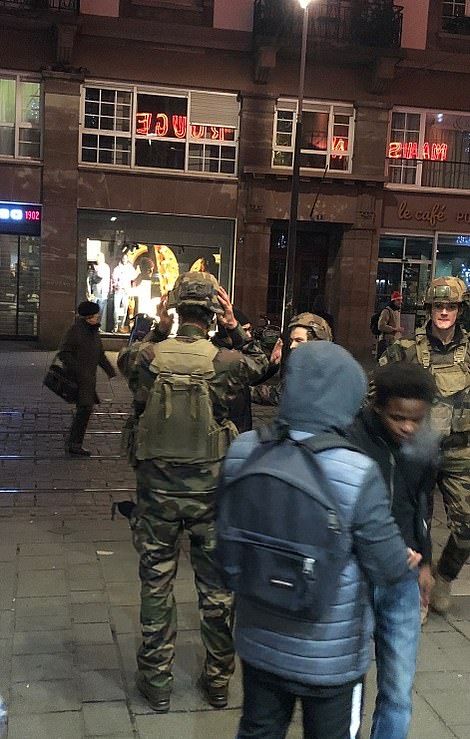 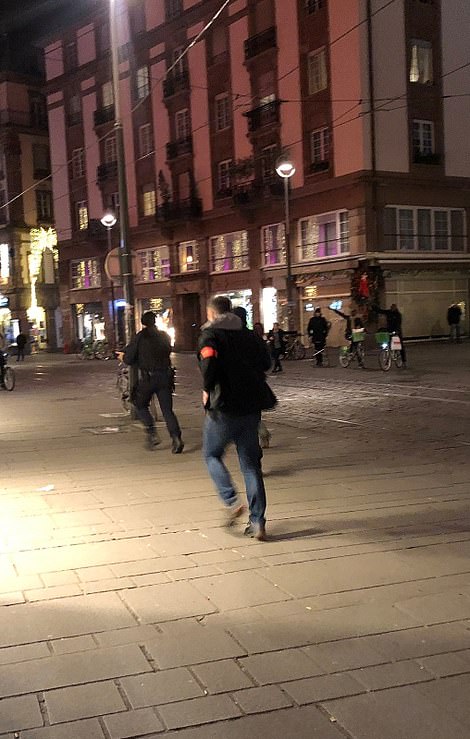 Castaner also said France had raised its security alert level to ’emergency attack’ with ‘the implementation of reinforced border controls and tightened controls on all Christmas markets in France to avoid the risk of a copycat’ attack.

France’s security forces, already on high alert after a series of terror attacks since 2015, are particularly stretched at the moment due to anti-government protests that have swept the country.

‘I heard shooting and then there was pandemonium,’ one witness, who gave his name as Fatih, told AFP. ‘People were running everywhere.’

He said he had seen three people injured on the ground only a few metres (feet) from the giant Christmas tree in the centre of the city.

Shortly after the shooting, lines of police vehicles and ambulances streamed into the market area, under festive lights declaring the city the ‘capital of Christmas.’

‘We heard several shots, three perhaps, and we saw people running,’ one witness told AFP, asking not to be named.

‘One of them fell down, I don’t know whether it was because she was tripped up or if she was hit,’ the witness said. 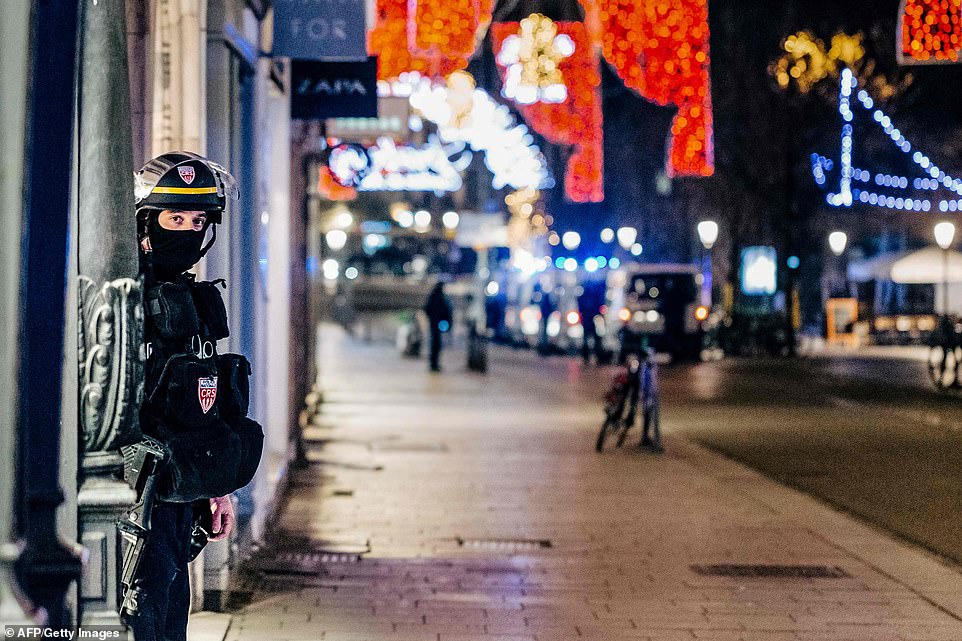 A police officer guards the scene near the Christmas market shooting. Dozens of officers were deployed to find the suspect 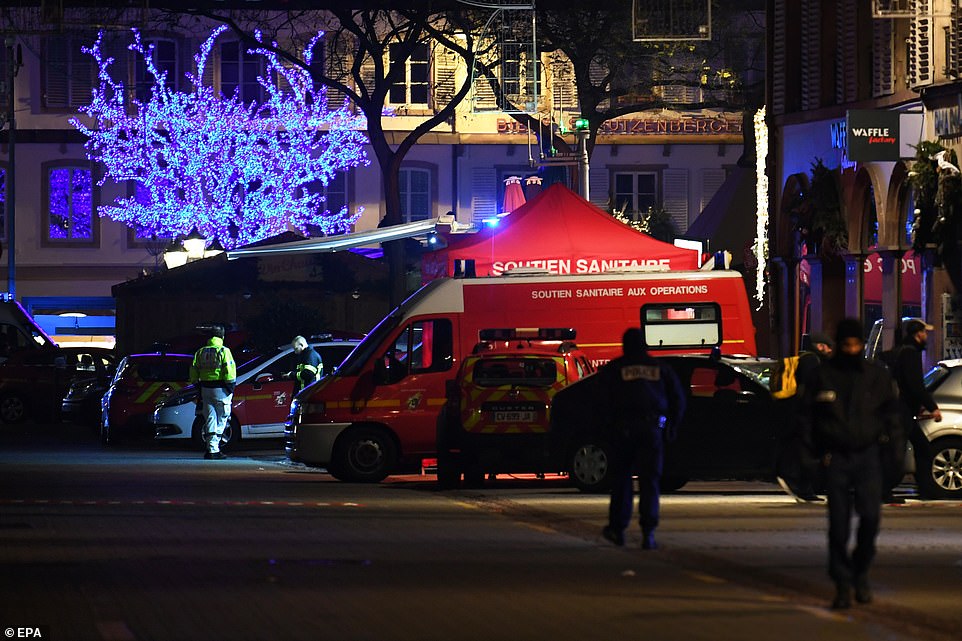 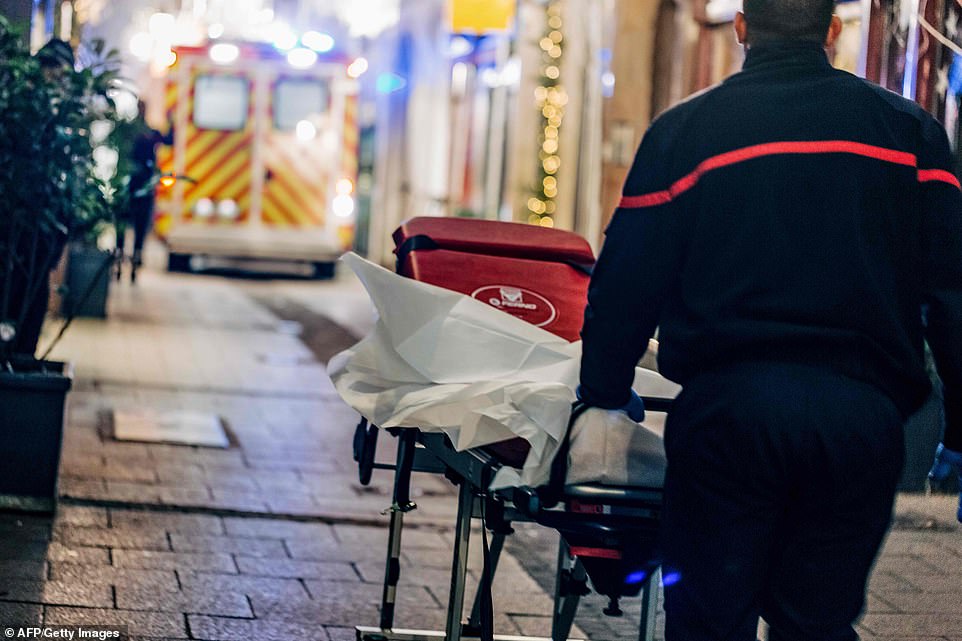 President Emmanuel Macron expressed on Twitter the solidarity of the whole nation after holding a crisis meeting with cabinet officials in Paris.

Two separate security sources told AFP on condition of anonymity that the shooter was believed to be a 29-year-old from the city, whose name was given as Cherif, and who was set to be arrested on Tuesday morning.

He was being investigated over an attempted murder, one of the sources said.

Several areas neighbouring the Christmas market were sealed off on Tuesday night and residents were being told to stay indoors.

Many people took refuge in local restaurants and bars which pulled down their shutters.

‘We let everyone inside, down into the wine cellar. They’re locked in there,’ local restaurant owner Mouad, 33, told AFP.

A police source, again speaking on condition of anonymity, said security forces had opened fire in an area of the city where the suspect was thought to be hiding.

The source did not give the address and it was unclear if the shooter had been located.

Specialist anti-terror prosecutors have opened an investigation into the incident in Strasbourg, which lies on the border with Germany. 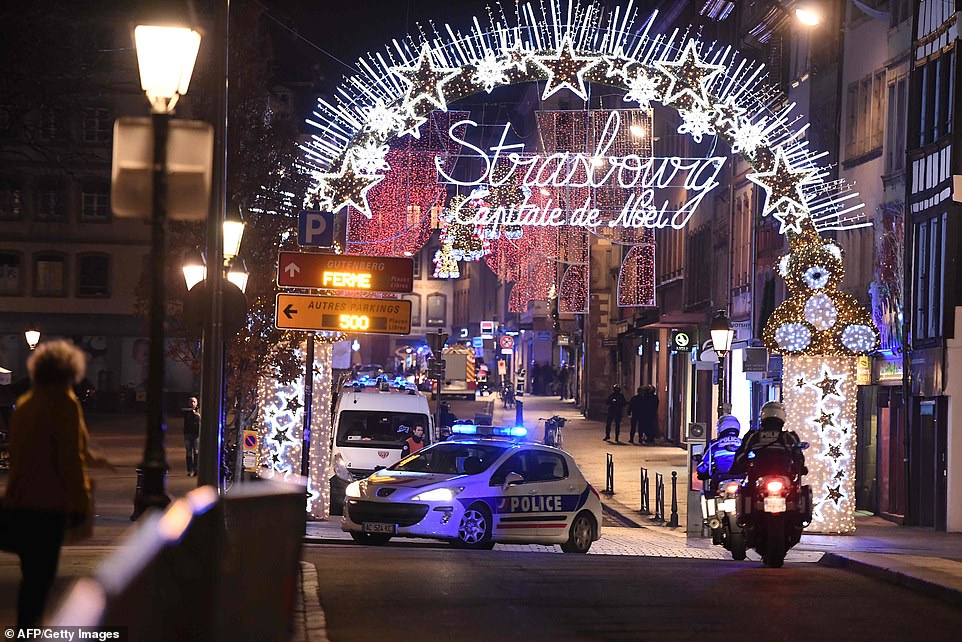 A police car is seen stationed outside market entrance, which shows Strasbourg branding itself the ‘Capital of Christmas’ 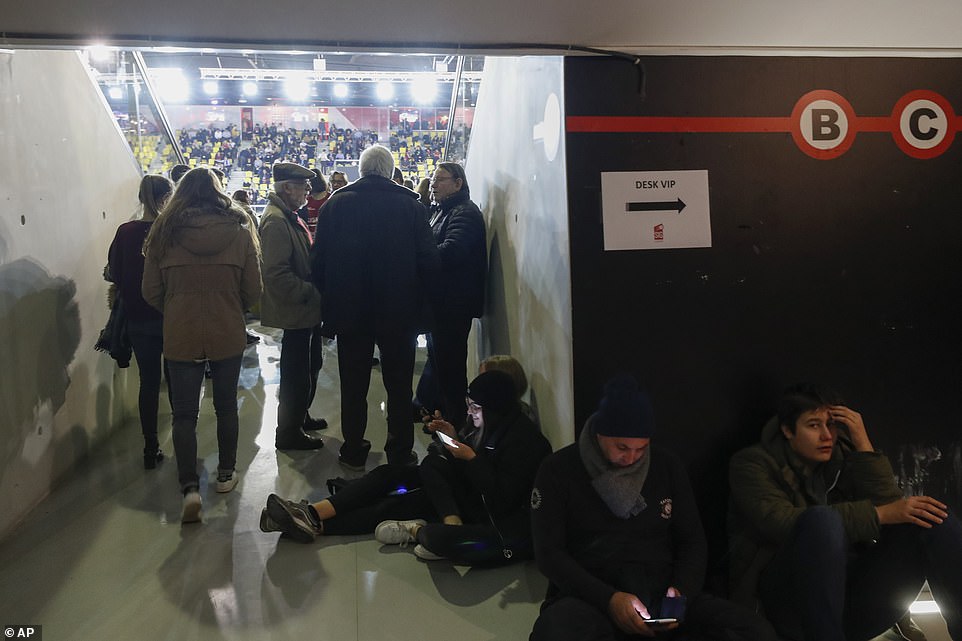 Basketball supporters were held up at the Rhenus Sport stadium in Strasbourg, eastern France following the shooting 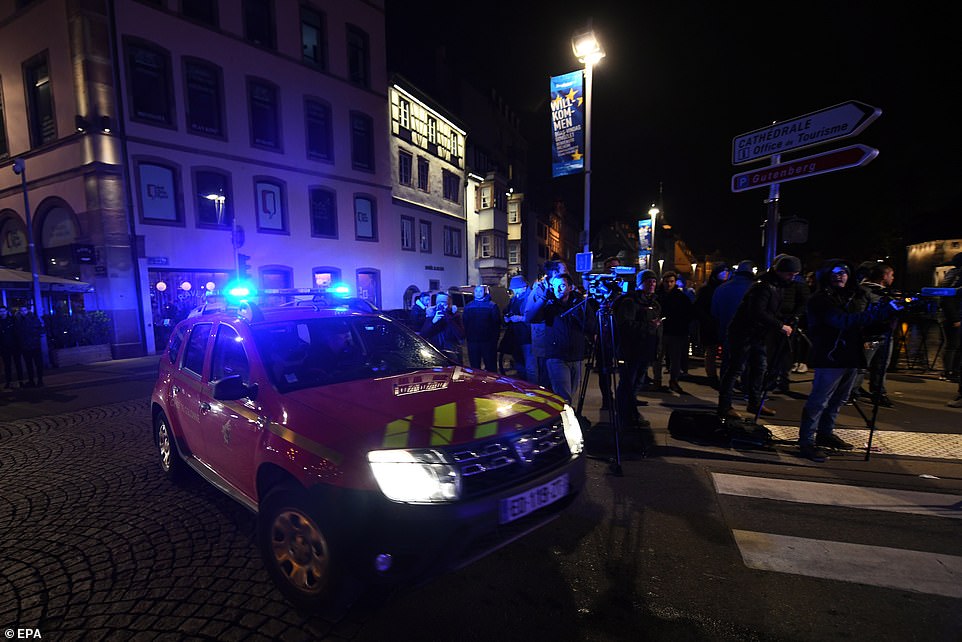 Media are seen near to the site of the shooting in Strasbourg last night. Much of the city remains on lockdown this morning 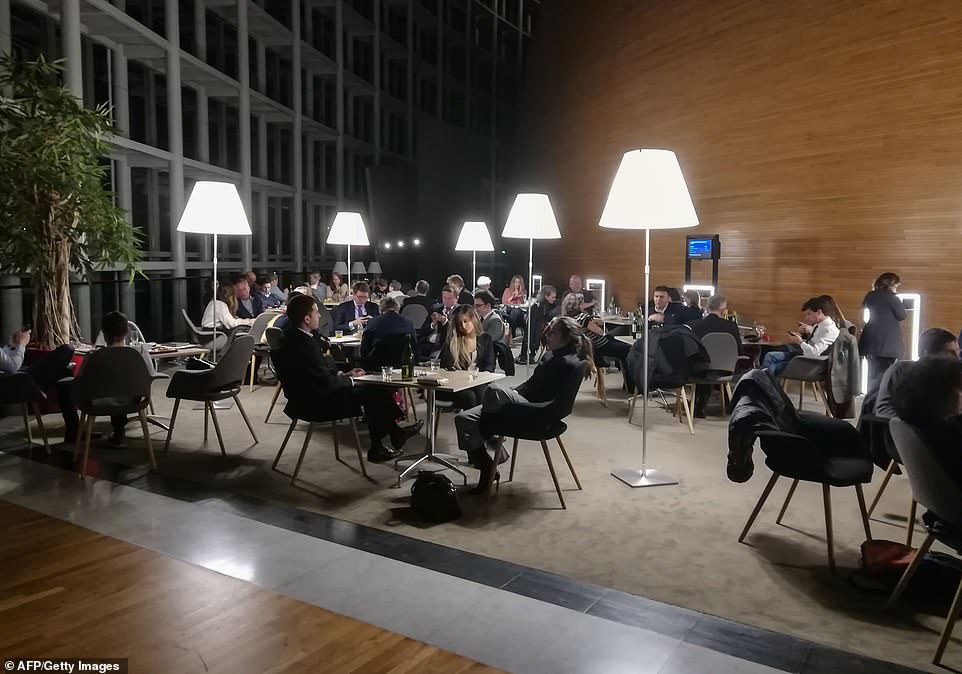 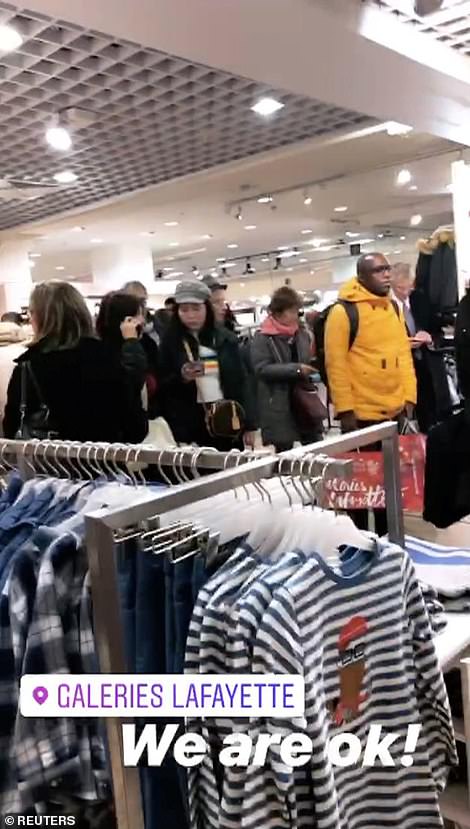 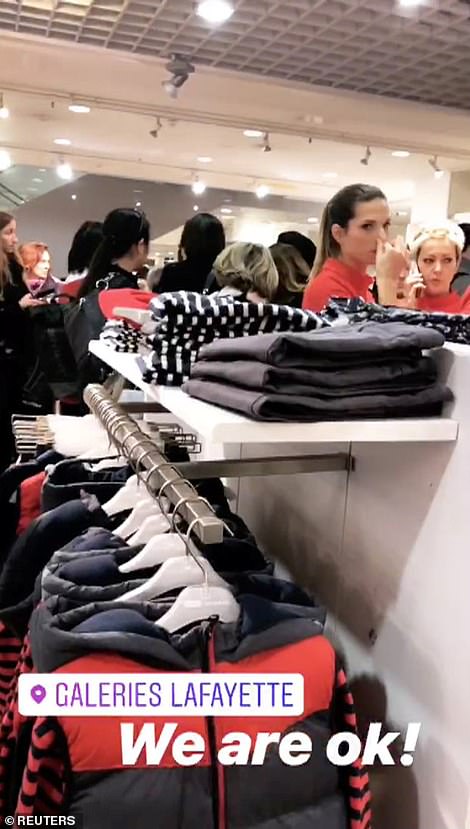 ‘We are ok!’ Revellers took shelter in the nearby Galeries Lafayette after the shooting began

Several residents of the city have been detained in recent years for trying to reach jihadist groups in Syria, or have been arrested upon their return.

‘Shocked and saddened by the terrible attack in Strasbourg. My thoughts are with all of those affected and with the French people,’ British Prime Minister Theresa May wrote on Twitter.

The Strasbourg-based European Parliament was also on lockdown, with MEPs, staff and journalists unable to leave the building.

‘Our first thought was for colleagues who had already made it to the centre of town, who are safe,’ Belgian MEP Kathleen Van Brempt told AFP. ‘Now we just wait.’ 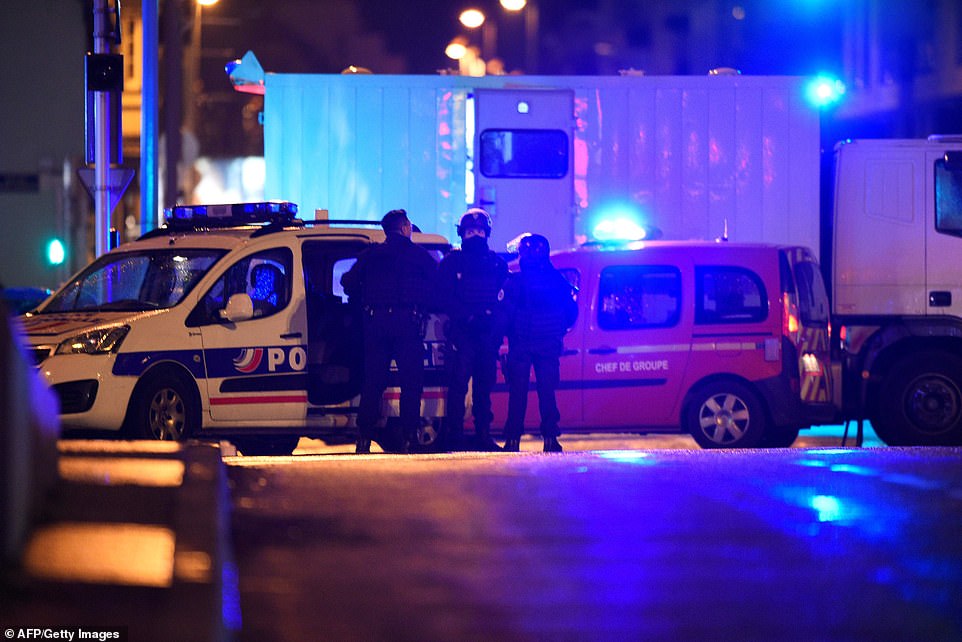 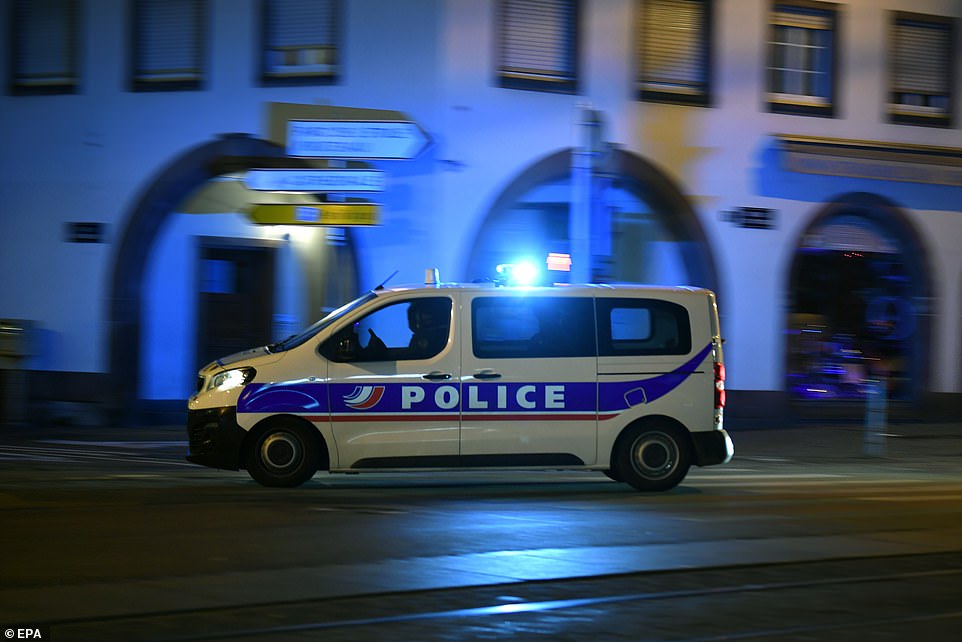 A French police van rushed next to the shooting site at the Christmas market in Strasbourg, the gunman has been on the run all evening 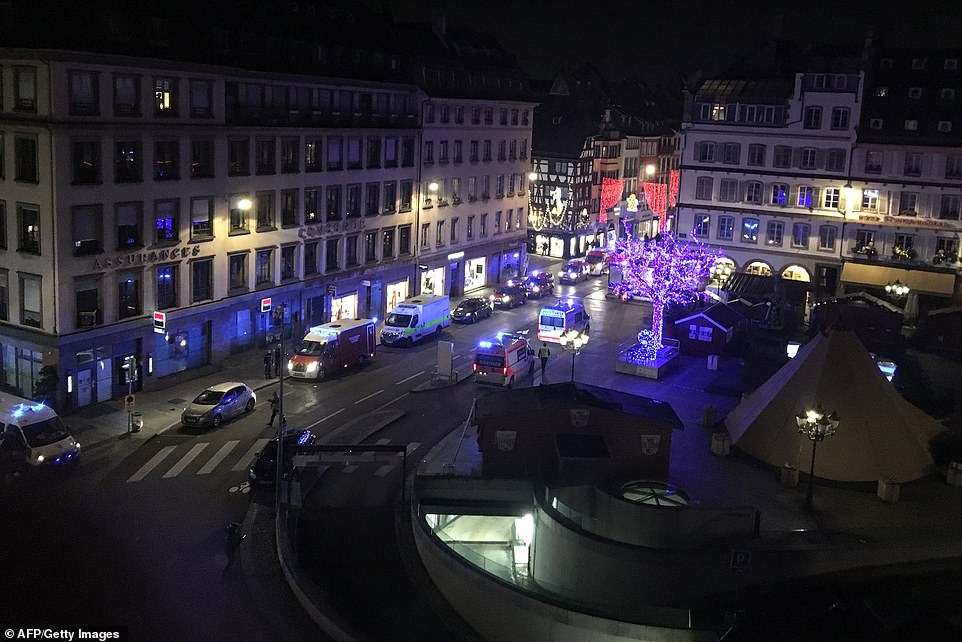 Police, firefighters and emergency services intervened after the shooting and the streets appeared clear of tourists 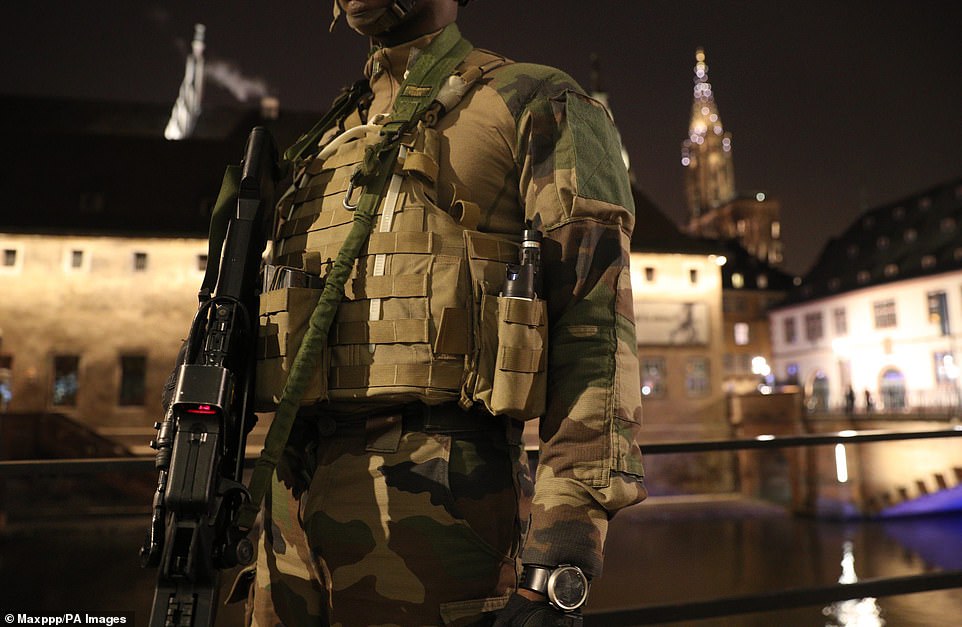 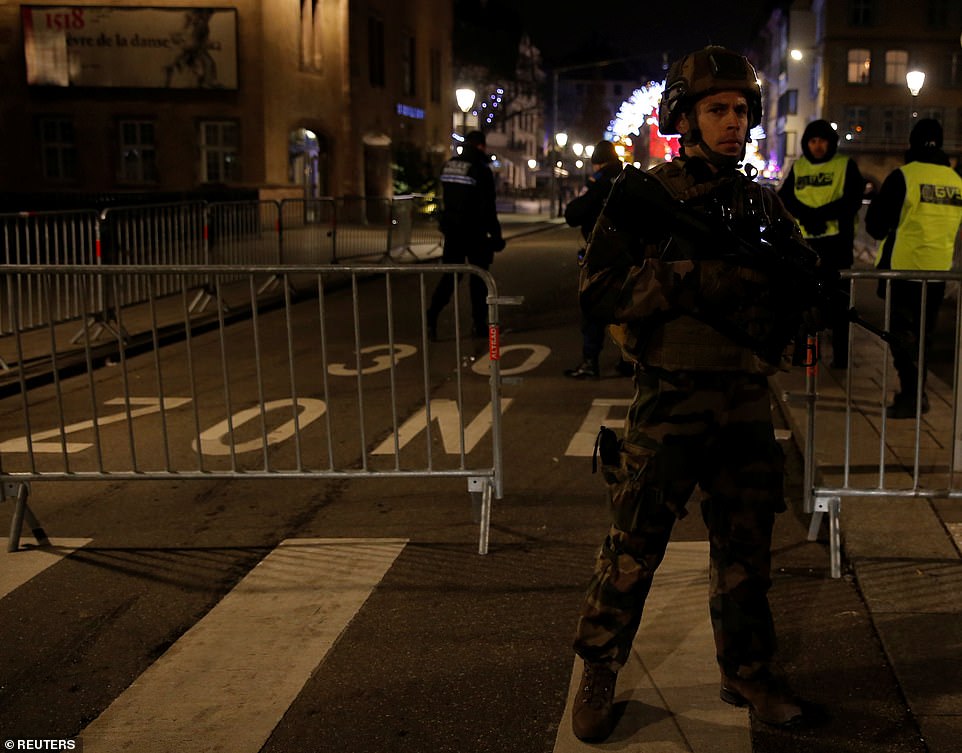 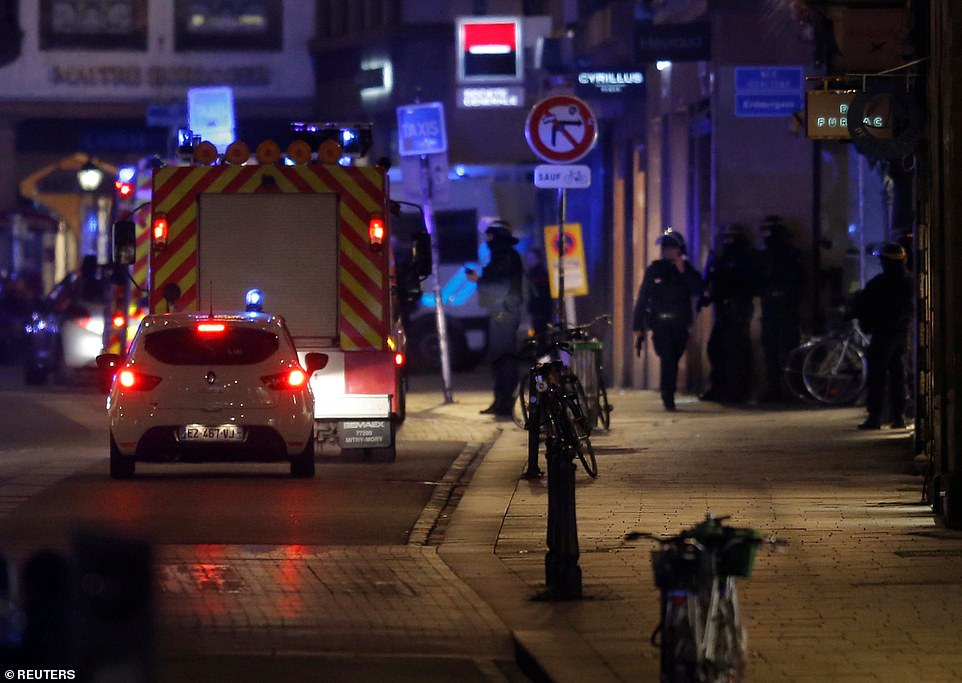 Emergency services on the scene in Strasbourg, France, following the incident where four people have died

The Christmas market in Strasbourg and the city’s illuminations are an annual attraction that draws hundreds of thousands of people.

Security has been stepped up in recent years after a series of attacks in France by Islamist gunmen and the Strasbourg market was long considered a possible target.

In 2016, a 23-year-old Tunisian killed 12 and injured 48 others when he ploughed a truck into a Christmas market in Berlin in an attack claimed by the Islamic State group.

Special anti-terror army units have been deployed in Strasbourg, and soldiers and armed police are regularly seen patrolling among the 300 wooden Christmas market chalets.

Three years after groups of jihadists gunned down and blew up 130 people in Paris on November 13, 2015, French counter-terror officials say their focus has shifted.

Rather than coordinated attacks, their main concern is attacks by ‘lone wolves’ – self-radicalised individuals acting without links to terror groups such as Islamic State.

Most recently a 20-year-old Chechnya-born man went on a knife rampage in central Paris last May, killing one man and injuring four other people on a Saturday night.

A total of 246 people have been killed in terror attacks in France since 2015, according to an AFP toll. 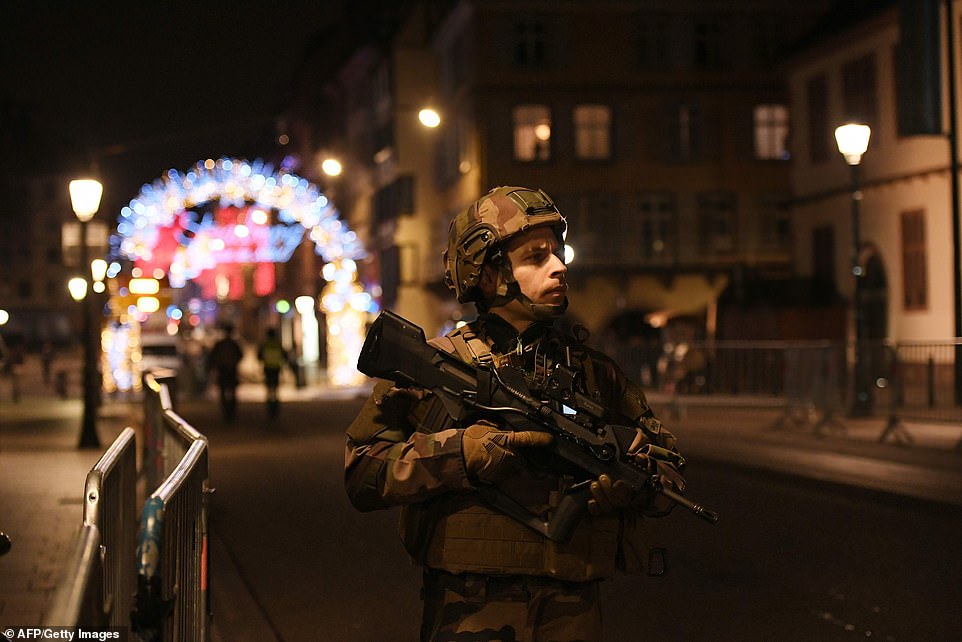 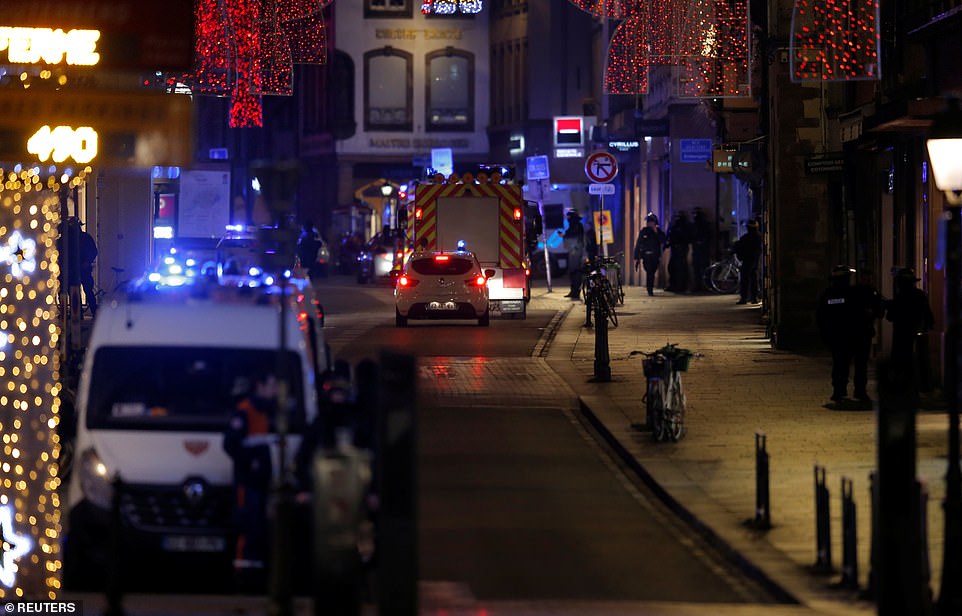 Deputy mayor of the city, Alain Fontanel tweeted: ‘ Thanks to all for staying at home until the situation has been clarified’ 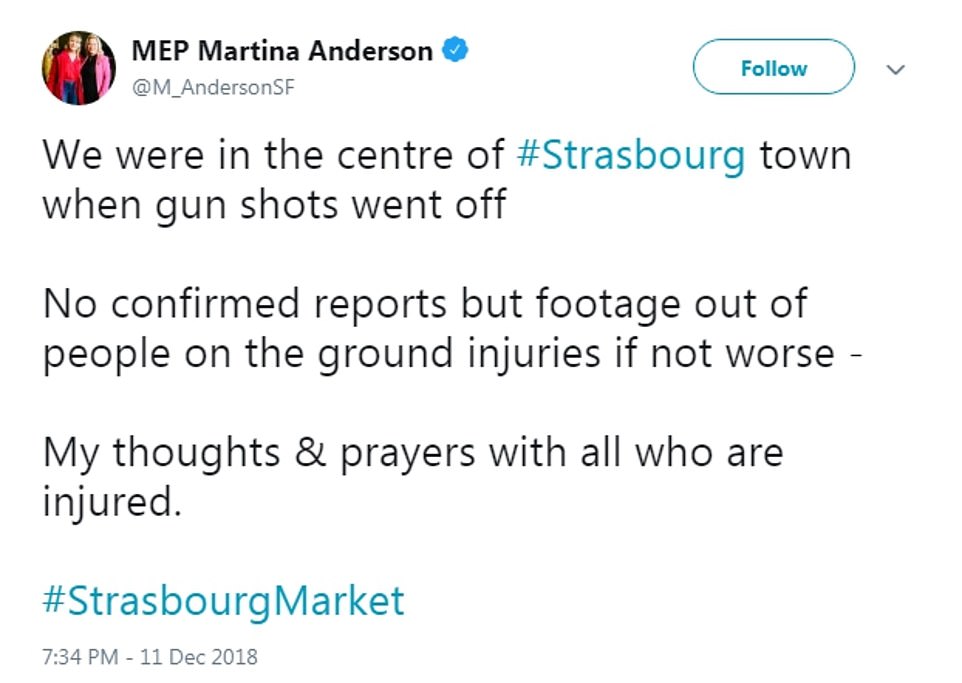