This is the shocking moment three ‘drunk’ men on a motorbike were involved in a head-on collision with a bus coming from the opposite direction in India.

But the three men – Madhusudanan, 21, Sukumar, 17, and Arjun, 22, – survived miraculously and escaped with just minor injuries.

While their bike was crushed and the bus was badly damaged.

The incident happened in Madurai district of Tamil Nadu, India, on September 16.

CCTV footage shows the three men attempting a steep turn on a curve without slowing down.

They collide with a government-owned bus coming from the opposite direction which runs over the motorcycle, crushing it in the process.

But the bus driver, called Nagendran, slammed the brakes avoiding running over the men who had fallen right in front of the bus.

Bystanders rushed to help the injured men and took them to Madurai Rajaji Government Hospital for treatment.

Additional Superintendent of Police Narasimha Varman said that the three youngsters were drunk when they hit the bus.

‘After they are discharged we will arrest Madhusudanan, who was driving the bike.

‘We will also book the other two who were riding pillion without helmets,’ he added.

Nagendran has filed a complaint against the men at the Sholavandan police station. 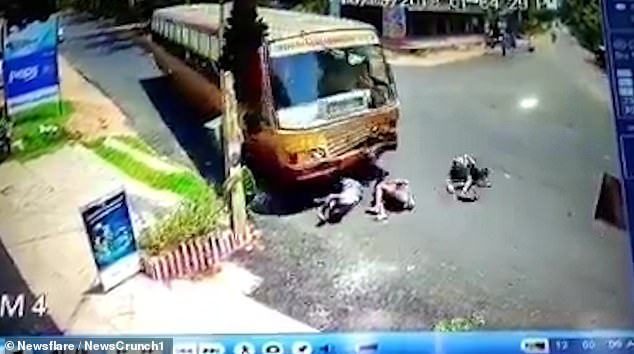