Three England players were allegedly involved in a plot to fix the Chennai Test against India in December 2016 – sensational claims which were described as ‘outrageous’ by England captain Joe Root on Sunday.

The Al Jazeera documentary, Cricket’s Match Fixers, also includes corruption allegations against two unnamed Australian Test players, and was aired on Sunday night by the Qatar-based channel. It prompted a blanket denial from the England Cricket Board about the players’ involvement.

Sportsmail is aware of the identity of all five cricketers, but is unable to name them for legal reasons.

The ICC said on Sunday night that a full investigation into the claims is underway and they are taking them ‘very seriously’.

The allegations against the England trio revolve around a 10-over bracket during the fifth Test in India 17 months ago – though the timing of the bracket is not specified by Al Jazeera, again because of legal sensitivities.

In the programme, Aneel Munawar, an alleged member of India’s notorious crime syndicate D Company, tells an undercover reporter posing as a businessman that certain England players agreed to manipulate the number of runs scored in the bracket, thereby assisting illegal bookmakers on the subcontinent in setting their odds.

It is claimed in the film that a wealthy investor in possession of prior information can make over £1m per game, while a corrupt player can earn six figures.

According to the programme, the England batsmen agreed to score fewer runs than the spread set for the bracket by the bookies, while the last over of the 10 is designated a ‘manda’ – ‘slow’ in Hindi – meaning that no more than two runs will be scored. 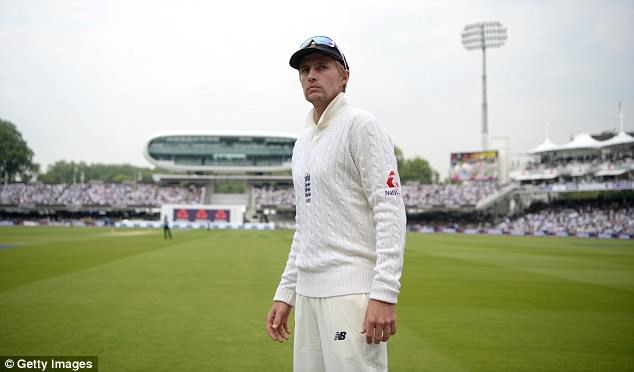 Though the precise details of the alleged fix are not divulged, Al Jazeera quote the reaction of Chris Eaton, the sports integrity director at the International Centre for Sport Security and a former Interpol officer.

Given full access to the details of the alleged fix at both Chennai and Ranchi, where Australia played India in March 2017, Eaton watched the relevant passages of play and said: ‘It’s very compelling evidence. Clearly what he [Munawar] predicted took place exactly as he predicted.

‘The Chennai and Ranchi Tests mentioned by Munawar are worthy of serious and transparent investigation by the ICC. The fact that he is able to accurately predict the end of two sessions brings their credibility into question.’

Asked about the allegations after his team had lost the first Test to Pakistan at Lord’s by nine wickets, Root said: ‘I am aware that there is a documentary and it is outrageous that our players have been accused. All the players have been briefed by the ECB, and have been told that there’s absolutely nothing to worry about.

‘I’ve been told to strongly deny the allegations. It sounds quite ridiculous really. As a group of players we’ve got to [let] the people in charge look after this, because I’m sure it’s nothing. It’s for the ICC to sort out. They’re the people in charge, and if there’s anything to it, they’ll look into it.’

Coach Trevor Bayliss also described the claims as ‘outrageous’, while ECB chief executive Tom Harrison said: ‘There is nothing we have seen that would make us doubt any of our players in any way whatsoever. 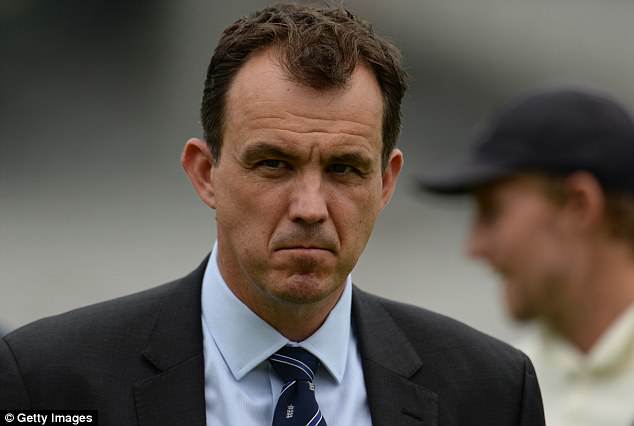 ‘The limited information we have been given has been discussed with all the England players. They emphatically deny the allegations, have stated categorically that the claims are false and they have our full support.’

Cricket’s Match Fixers includes a quote said to come from lawyers representing the three England players. It points out that Munawar is ‘a known criminal’, and adds: ‘For the batting team to fix scores to within such a degree of precision as alleged is highly improbable, if not practically impossible.’

Ed Hawkins, an expert in cricket betting, was also given privileged access to Al Jazeera’s information. ‘It’s mind-blowing,’ he said after watching the footage. ‘I defy anyone who cares about cricket to watch this and not have a knot in their stomach.’

Al Jazeera made it clear that they believe no more than three England players and two Australians are involved. Meanwhile, the Australian board said in a statement that ‘neither the ICC nor Cricket Australia is aware of any credible evidence linking Australian players to corruption in the game’.

The ICC is unhappy that Al Jazeera failed to share information ahead of transmission, though it is understood the broadcasters will pass on more details to the game’s governing body this week.

In a statement, the ICC’s anti-corruption boss Alex Marshall said he was ‘taking the allegations extremely seriously’. 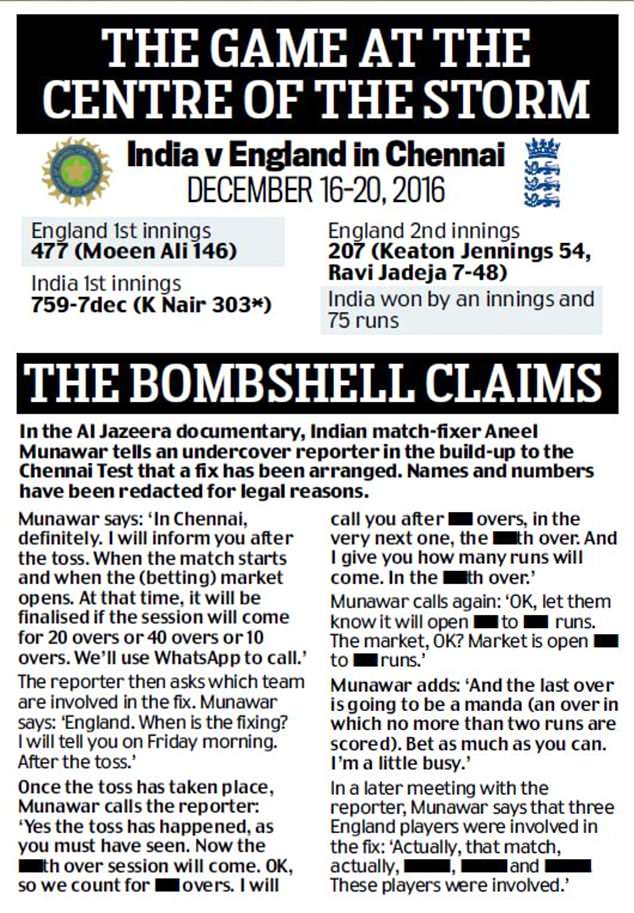 The statement said: ‘The ICC has now had the opportunity to view the documentary and we are taking the contents of the programme and the allegations it has made extremely seriously. A full investigation led by the ICC Anti-Corruption Unit, working with full co-operation from all member countries identified in the programme, is under way to examine each claim made.

‘I would now urge the production team to provide us with all un-edited and unseen evidence they are in possession of, to enable us to expedite a thorough investigation. Given this is a live investigation and one that is likely to be subject to the legal process, it is not possible to provide any further comment.’

The show also contains footage of Gaurav Rajkumar, an advertising executive who claims to be setting up a Twenty20 tournament in the UAE solely for the purposes of match-fixing.

The proposed four-team competition would take place over 10 days, with non-corrupt players earning around £1,000 per match, and those involved in fixing netting between £35,000 and £40,000 a game.