Three generations of the same family all had cancer

A mother and daughter who both suffered from the same form of cancer are devastated after a third generation of their family has been struck down with the disease.

Joanne Moss, 49, from Washingborough, Lincolnshire, was diagnosed with the blood cancer Non-Hodgkin Lymphoma in May 2010 when she was 42 years old but received the all clear after around six months of treatment.

Yet just months after Ms Moss’ final check-up, her daughter Jessica, now 21, discovered a lump in her neck that turned out to be Hodgkin Lymphoma.

After surgery and intense chemotherapy, Jessica, a university student, is in remission. Yet, in a cruel twist of fate, Ms Moss’ mother Pat Boughen, 83, from Hatfield, south Yorkshire, was diagnosed with Hodgkin Lymphoma in September last year.

Despite all three generations suffering from the same form of cancer, they are not thought to have a genetic link to the condition, making the women put it down to ‘some kind of cruel lottery’.

Ms Moss said: ‘To be unlucky twice is ridiculous but three times is unbelievable.’

The family has vowed not to beaten by the disease and are supporting Cancer Research UK’s ‘Right Now’ campaign.

Joanne Moss (right), 49, was diagnosed with blood cancer in May 2010. Her daughter Jessica (left) discovered she had the same disease after her mother was given the all clear. In a cruel twist of fate, Ms Moss’ mother Pat Boughen (centre), 83, was diagnosed last year 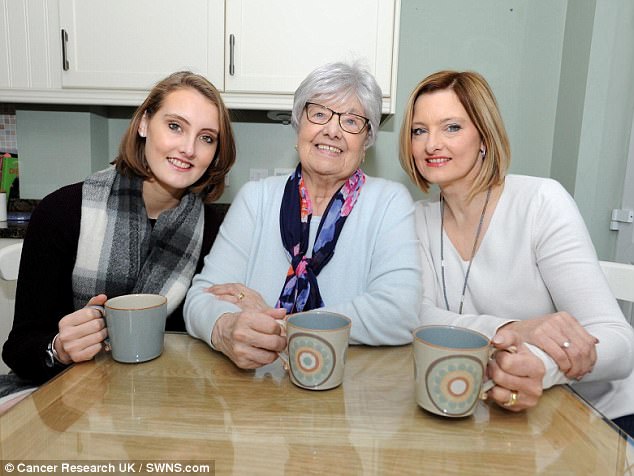 Despite three generations of the family suffering from the same form of cancer, there is not thought to be a genetic link, making the women put it down to ‘some kind of cruel lottery’

Both Hodgkin and non-Hodgkin lymphoma begin in blood cells, known as lymphocytes, which are involved in the immune system.

The main difference between the different conditions is the specific lymphocytes they develop in.

Both diseases can cause painless swellings in the lymph nodes.

Hodgkin lymphoma is more common in the upper part of the body, such as the neck, underarms and chest.

Patients with either conditions may experience weight loss, fevers and night sweats.

Hodgkin lymphoma is generally considered more treatable, with over 90 per cent of patients surviving more than five years.

Treatment depends on the cancer’s aggressiveness and location, as well as the patient’s age and overall health.

The family could not understand their bad luck when they had to go through the trauma of a second cancer diagnosis but describe three generations being struck down with the illness as ‘unbelievable’.

There is no sign of any genetic cause behind all three women suffering from the disease, causing them to put it down to ‘some kind of cruel lottery’.

Ms Moss said: ‘Mum had a lump in her neck that came and went. She had an ultrasound scan but it didn’t show anything.

‘Mum had other symptoms which they thought might be a condition called Sjogren’s Syndrome. We were expecting that to be diagnosed.

‘At the back of my mind I thought, “could it be that, could it be cancer?” I had these doubts but you just hope it’s not.’

She said: ‘When they told me I started shaking, I was in a state of shock. I just broke down.

‘It took me a few weeks to really get my head around things and to realise what we were facing and that this really was happening to us again.

‘When Jessica was diagnosed I went into practical mode, that took over and I kept focused on what she needed, what appointments were coming up and looking after her.

‘If I look back on when I was diagnosed, it feels surreal, as if it all happened to someone else. I am a practical person so just got on with things, you have to.

She said: ‘We still can’t believe it. Just as we were getting life back to normal, cancer strikes again.

‘To be unlucky twice is ridiculous but three times is unbelievable.’ 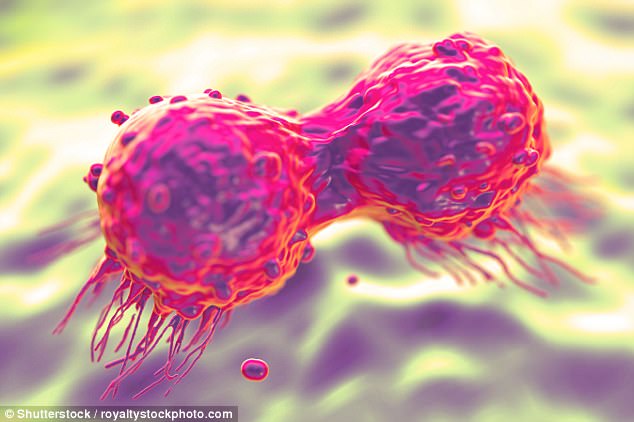 Jessica, who deferred her optician-training course by a year due to her diagnosis, was with Ms Boughen at the hospital when her grandmother was diagnosed with Hodgkin Lymphoma.

She caught sight of the notes before they spoke to the consultant and saw the diagnosis in writing.

Jessica said: ‘I think somehow I knew what it would be but it was still a real shock. I took nana’s hand and was very calm.

‘If I hadn’t been through it myself it might have been different, I might have found it scary but I knew what to expect, I knew there was treatment and that you can be diagnosed and come through it.

‘They’ve said it’s not genetic, we’ve wondered if we’re predisposed to it or just very unlucky, but no one can say for sure.’

Ms Boughen is halfway through her chemotherapy. The lump in her neck has gone and her treatment is expected to finish in March.

She said: ‘You do think of how unusual this is, how unlucky for three of us in the same family to go through this but it’s brought us closer.’