EXCLUSIVE: Hero surfer mates save a woman from certain death after she threw herself from a 25-metre cliff, slammed into the water and floated motionless as she was smashed by waves

Three hero surfers have relived the dramatic moment they rescued a motionless woman from the water after she plunged 25 metres from a Sydney cliff.

Dylan Decosta, Khava Black and Toby Dunn, from Maroubra, saved the young woman’s life at nearby Lurline Bay at about 6pm on Tuesday.

Witnesses and police told Daily Mail Australia the woman was under the influence of alcohol or drugs at the time and it appeared she attempted take her own life.

The three young men were surfing a reef break inside the bay when they heard a cry for help from two spear fisherman 30metres away.

When they looked over, they saw a motionless 28-year-old woman floating in the water, wearing a dress.

‘We heard the call for help and that’s when we saw her body,’ Mr Decosta told Daily Mail Australia.

‘She was at a cliff jump called ”Sky Level” and from what other people said, she turned around and went backwards off the cliff.

‘When we first saw her we thought she was dead. We saw no movement, and we were paddling slowly because we were shocked.’ 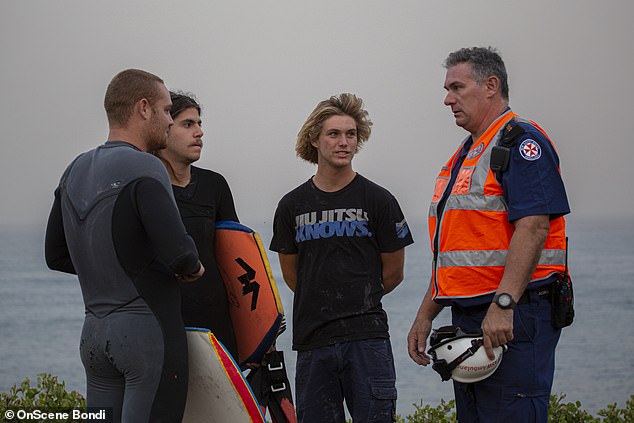 The surfers grabbed the woman and put her on to a surfboard to keep her afloat, before frantically paddling towards the rocky shoreline.

The woman was conscious, but Mr Decosta said her responses were not normal.

‘She had visible red marks all over her body, I’m guessing from hitting the water so hard,’ the 19-year-old said.

‘She was complaining of water in her lungs the whole time.

‘As she spoke to us, she was looking straight through us. 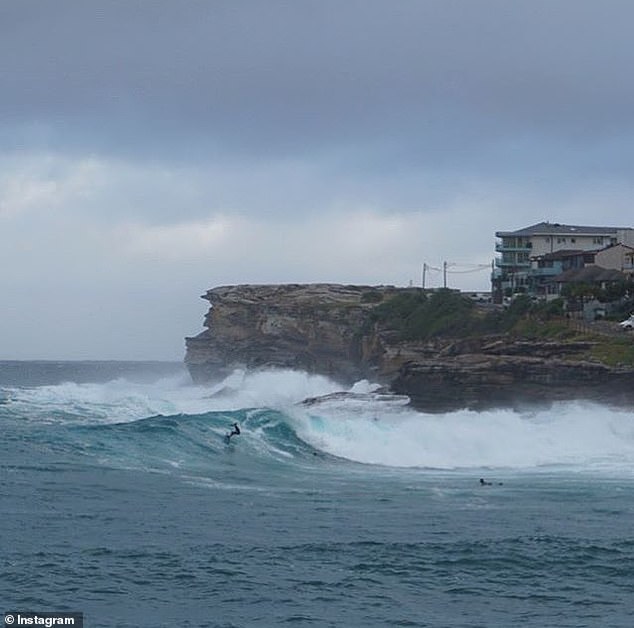 The three mates are experienced surfers and knew the best place to get the woman out of the water, but in her state and with a rising tide, the rescue proved difficult.

‘We had about a 20 minute struggle of getting her up the rocks,’ Mr Decosta said.

‘We were getting smashed by waves the whole time and were constantly paddling and negotiating the rocks.’

Spectators watching from shore called an ambulance as the boys tried to calm the woman, who other witnesses said was ‘combative’ once on the rocks.

She was treated at the scene and taken by helicopter to Royal North Shore Hospital in a stable condition. 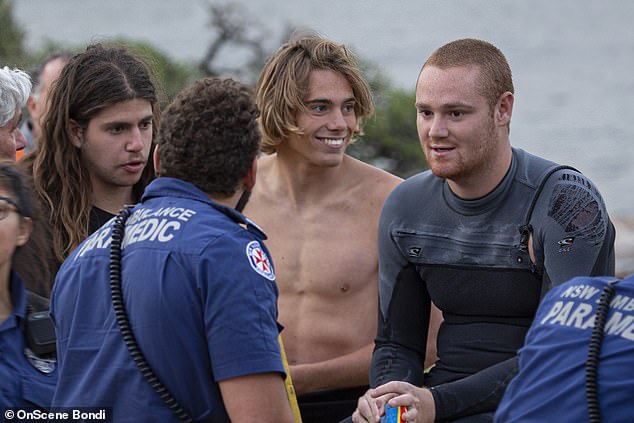 The trio have been hailed as heroes after their dramatic rescue. The woman was taken to Royal North Shore Hospital in a stable condition

While the three surfers are being hailed as heroes, Mr Decosta said they were confident they were going to get her out of the water.

‘We knew we would always get her up, we were just more worried about our safety in the end,’ he said.

‘We were getting sea urchins in our feet, nothing we’re not used to.’

Royal North Shore Hospital told Daily Mail Australia they could not comment on the woman’s condition for privacy reasons.

A NSW Police spokesman said no details were available as they believed it was a self-harm incident. 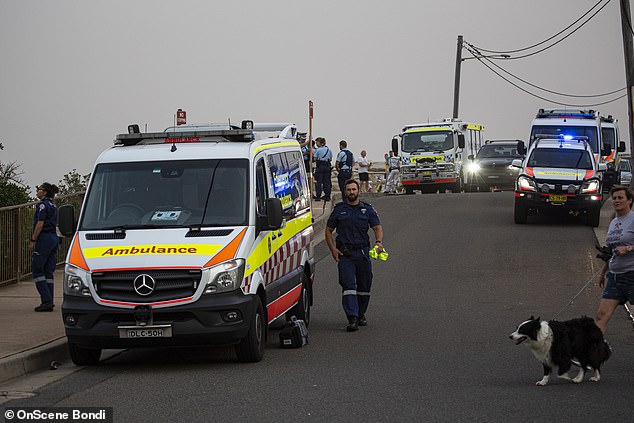 Emergency crews are pictured at the scene on Tuesday