The office for environmental protection said Tuesday that the Olive Ridley turtles drowned after getting caught in the net by a network of illegal fishermen in the area.

The office said in a statement Tuesday that the endangered turtles were badly decomposed when found in the water near Puerto Escondido, Oaxaca. They had been dead for about eight days when local residents reported them.

Residents in Oaxaca, Mexico, alerted officials of the endangered turtles that were abandoned in a fishing net. Nearly 300 died and were buried in a nearby beach 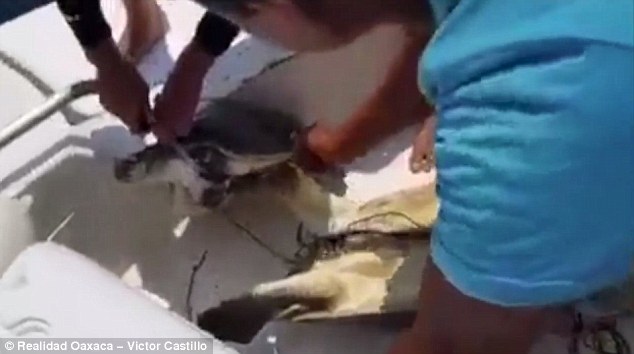 Rescuers fought to save some of the Olive Ridley endangered turtles, cutting off the netting that was suffocating them

A team of rescuers descended on the waters and could be heard tying to deploy different ways in which they could  line up support cables onto the netting and safely haul the dead turtles to shore without losing any of them.

A couple of fishermen could be seen inside a boat trying to cut the netting off some turtles that still showed signs of life. It’s unknown if they survived.

The turtles had been trapped in a 393-foot (120-meter) long net that is not approved for fishing.

‘Believe me, it’s an unbearable smell,’ said one man recording the grisly scene.

‘As human beings the question we ask ourselves today is how far have we come?’ 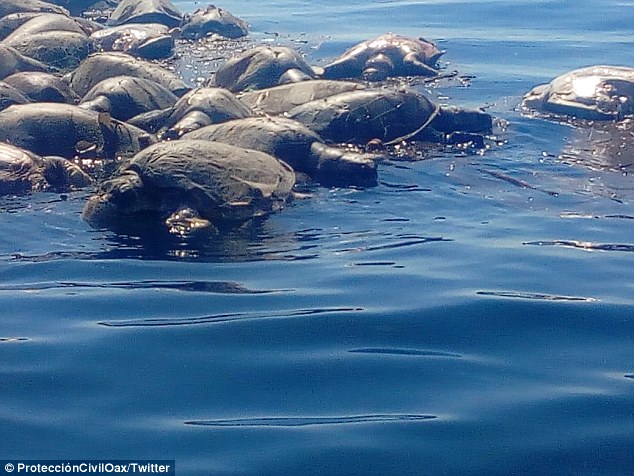 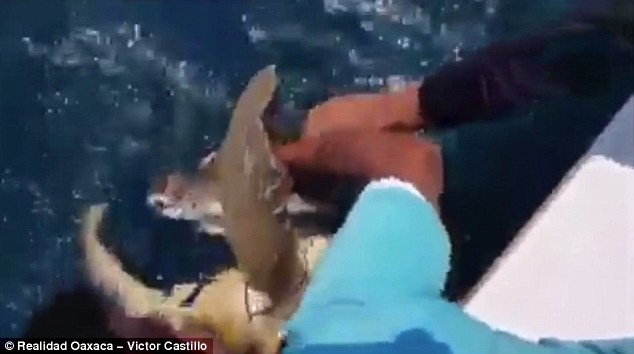 Rescuers placed some of the turtles that showed signs of live inside their boats. It is unknown how many survived

‘Believe me, it’s an unbearable smell,’ said one man recording the grisly scene.

‘As human beings the question we ask ourselves today is how far have we come?’

The turtles were buried on the beach, and environmental officials are investigating who set the net.

The report of the dead endangered turtles comes a week after authorities in the Mexican state of Chiapas had found 132 dead turtles from July 24 to August 22 in Puerto Arista, one of the state’s four sanctuaries for marine turtles where their eggs are protected.

Earlier in August, four endangered turtles were recovered by official from an outdoor market in Mexico City.