A three-inch Amazonian Hummingbird is the best-adapted bird to long-distance flight, a study has found.

The Reddish Hermit, Phaethornis ruber, is armed with long, pointed wings to allow the three-gram avian to zoom efficiently between flowers and gather nectar.

Scientists at the University of Bristol and Imperial College London revealed the finding, after measuring the wings of 45,801 birds from more than 10,000 species.

Reddish Hermit was found to be the best bird at long distance travel due to its long, pointy wings. The tiny Hummingbird is one of the smallest avians in the world 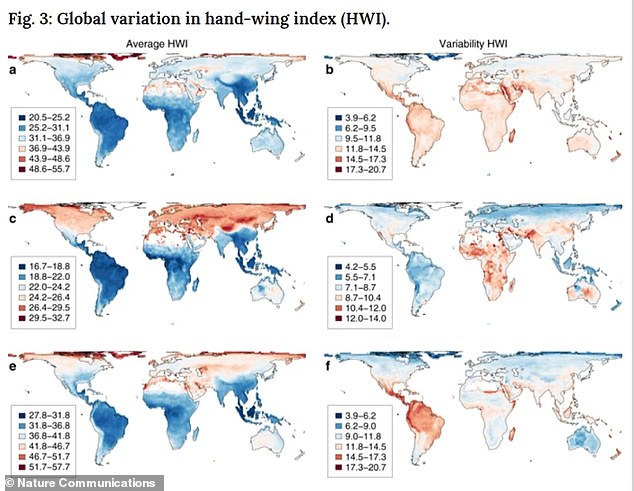 The researchers from University of Bristol and Imperial College London also found that wing shape varied depending on the geographical region. Maps C and D refer to Passerine birds, which tend to be song birds, and maps E and F show distribution by non-Passerine birds, which includes cormorants, owls, parrots and falcons. Maps A and B are for all birds

They compared the effectiveness of wings for long-distance travel using the hand-wing index, which compares the length of a closed wing to the distance from a bird’s ‘wrist’ to the tip of the wing’s second longest feather.

Birds with long pointy wings, which included migratory swifts and Arctic Terns, were found to be best adapted to long-distance travel.

While those with shorter, stubby wings, such as rheas and ostriches, were shown to only be able to fly very short distances, if at all.

Dr Catherine Sheard from the University of Bristol, who led the study, said the Reddish Hermit was especially well adapted for flying due to its diet.

‘Birds that eat nectar have on average much more elongated wings,’ she said.

‘We presume this is linked to their foraging strategy, as hummingbirds have to spend a considerable amount of time in flight, hovering at flowers and moving between different sites.’ 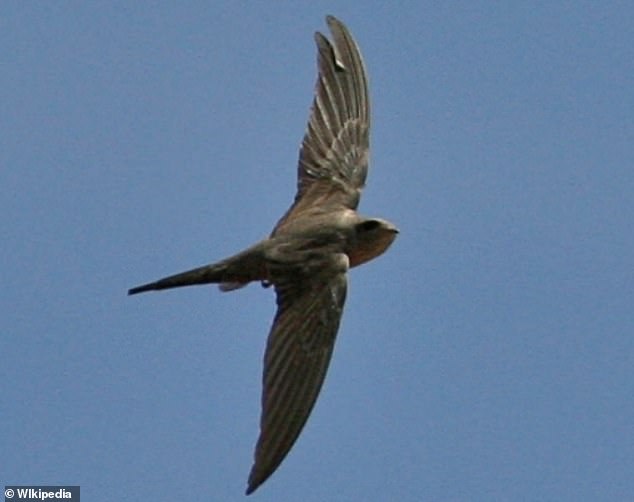 The African Palm-Swift was the second best adapted to long distance flight, the study showed 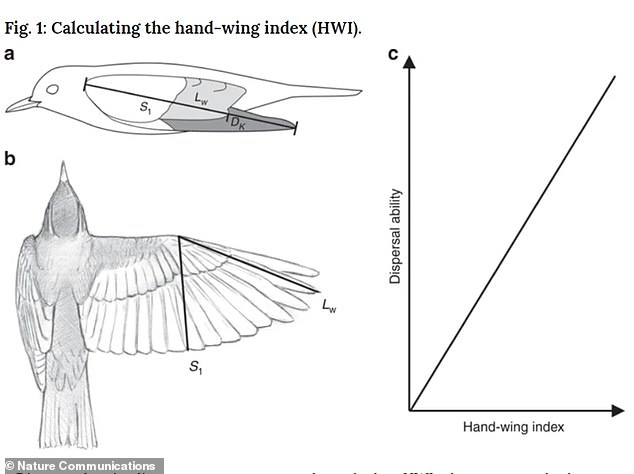 Birds were compared using the hand-wing index, which is found by measuring the length of a closed wing  and the distance from its wrist to the tip of its second feather

The African Palm-Swift, which looks like a Boomerang during flight because of its long, swept-back wings, was the second-best adapted.

It spends most of its time on the wing, catching insects mid-air, and only uses its short stubby legs for grasping.

What is a Reddish Hermit?

This is a three-inch Hummingbird with long, pointy wings, that feeds on nectar around the Amazon.

It is identified by its long beak, cinnamon-coloured breast and black patch by the eye. 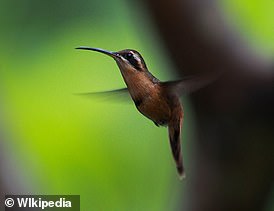 A Reddish Hermit is pictured above

The bird is one of the smallest in the world, and prefers to live in humid forests and woodland.

The IUCN says it is a species of Least Concern, although the population has been decreasing in recent years.

The Arctic Tern which flaps across 22,000 miles between the Arctic and Antarctic every year on the world’s longest migration, was also well-adapted to long-distance flight.

Swifts made up eight of the birds in the top ten, while hummingbirds accounted for two.

Ground birds made up the bottom ten. This included three casowaries, two ostriches, two rheas, a rail and an emu.

The research, published in Nature Communications, found that birds better able to fly over long distances were more likely to live in Arctic regions, be migratory and/or non-territorial.

They also found that different wing shapes were geographically distributed.

They suggested that this was due to temperature variation, territorial defence behaviours and migration.

‘Given the role we know dispersal plays in evolutionary processes, from speciation to species interactions, we suspect this relationship between behaviour, the environment, and dispersal may be shaping other aspects of biodiversity.’

Dr Joseph Tobias, senior author of the study, based at Imperial College London, said: ‘We hope our measures of wing shape for over 10,000 bird species will have numerous practical applications, particularly in ecology and conservation biology, where so many important processes are regulated by dispersal.’

A previous study on wing shape, published in October last year, found that it was correlated with geography across 10,391 different species.

They found that the strongest predictor for this change was temperature, followed by diet and habitat type.