Bani Duarte, 27, has been charged with vehicular manslaughter while intoxicated and driving under the influence

Three Las Vegas high school students on spring break have been killed after a suspected drink driver plowed into their car in Southern California.

Bani Duarte, 27, was driving northbound on Pacific Coast Highway when she struck a red Toyota that was stopped at the intersection of PCH and Magnolia.

Her Hyundai Sonata rear-ended it, pushing the car through the intersection and causing it to run up onto a sidewalk.

Three of the four passengers were killed on impact or after the car burst into flames and when police arrived shortly after, they found the car giving off plumes of smoke.

A fourth passenger was taken to a local trauma center but has since been discharged, Huntington Beach police spokesperson Angie Bennett said.

An officer tried to rescue the other three teens but the car burst into flames.

Duarte has been charged with vehicular manslaughter while intoxicated and driving under the influence.

The victims – who have been named locally as Dylan Mack, AJ Rossi and Brooke Hawley – all attended Centennial High School in Compton.

Dylan and AJ were just two months away from graduation and were in California celebrating spring break.

They had rented a motel room and planned to spend time shopping at malls.

Hawley was an athlete at the school and had played on Centennial’s varsity soccer team for the last two years. 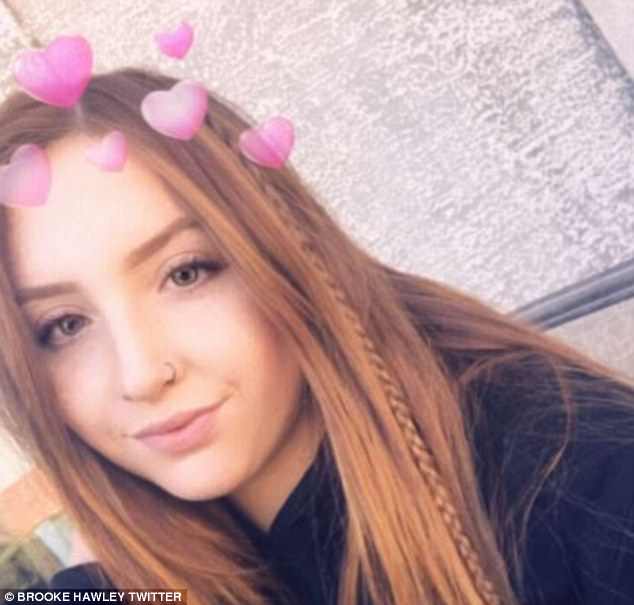 Brooke Hawley was killed in the crash on the Pacific Coast Highway, which left her and two others dead 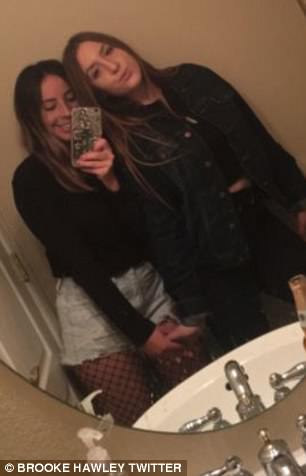 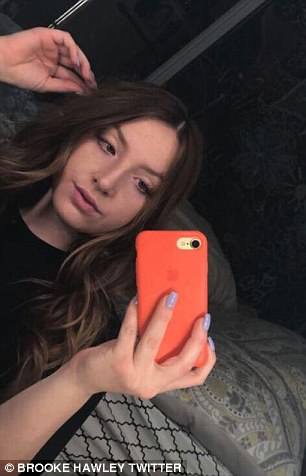 AJ was the son of a disabled veteran, injured during the Vietnam war.

A decade ago AJ’s mother passed away and, with the help of his daughter, Allie, AJ’s father Albert raised three children and two grandchildren as a widower.

On a Go Fund Me page set up by well-wisher Ben Leavitt to collect for the funeral, AJ is described as ‘the centre of attention’ and ‘superlative’.

‘AJ was always the center of attention and his smile lit up every single room that he walked into. In fact, AJ just won the ‘Best Smile’ superlative for his senior class.

‘After high school, AJ had plans to attend college at College of Southern Nevada this fall. AJ had a whole life ahead of him that a drunk driver abruptly ended.’ 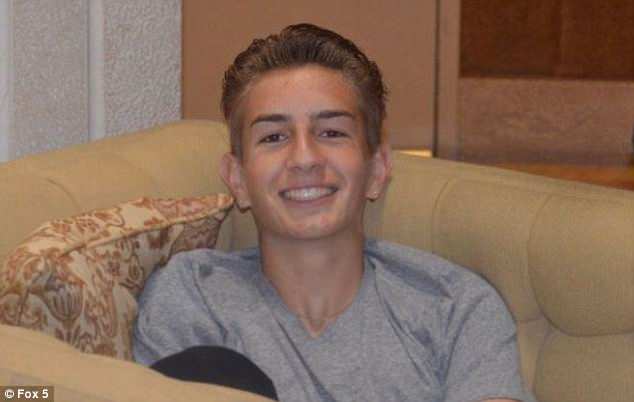 Dylan Mack (pictured) was just two years away from graduating. He was hoping to spend spring break with friends, visiting malls and enjoying time off school 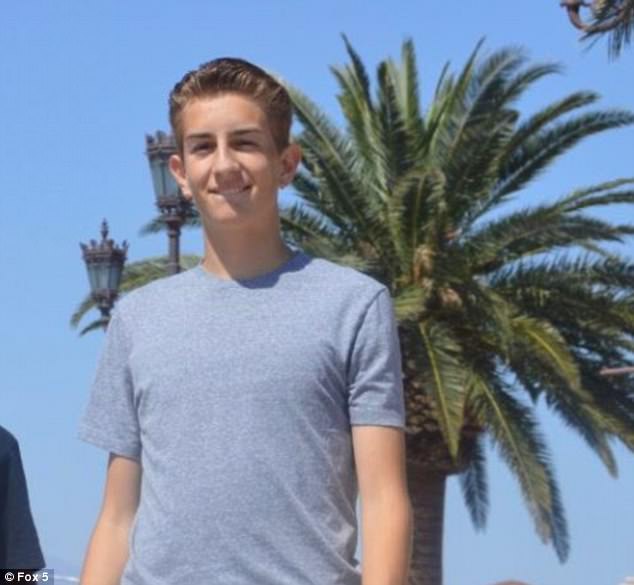 The fatal crash occurred in the early hours on Thursday morning 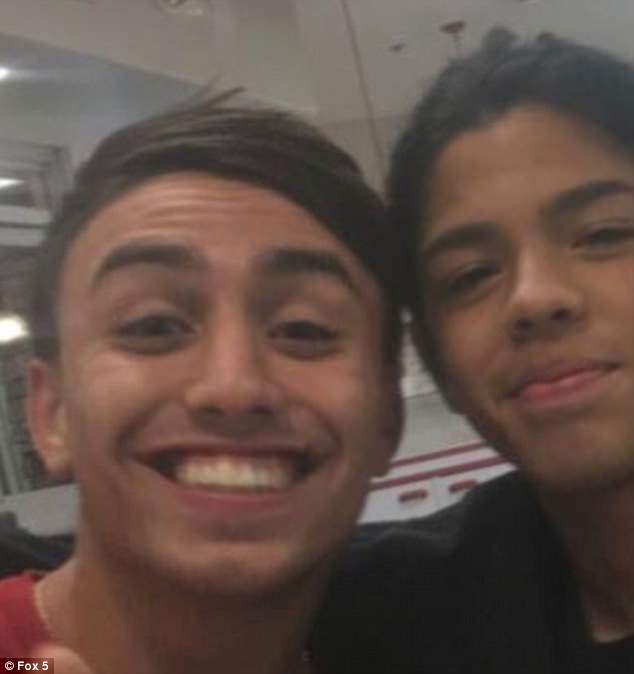 AJ (pictured with a  friend) was described as ‘the center of attention’ and ‘superlative’.

The tragedy has sent shockwaves through the Centennial community.

‘It’s not right. I shouldn’t have to worry about any of my friends being killed at 18,’ one of Dylan Mack’s close friends, Tyler McAdams told Fox 5.

‘I always wanted a brother and he was the closest thing I ever got,’ he added.

McAdams’ grandmother Debby Hudanish had a message for alleged perpetrator and for anyone who might contemplate drink driving.

‘This tragedy didn’t have to happen,’ Hudanish said. 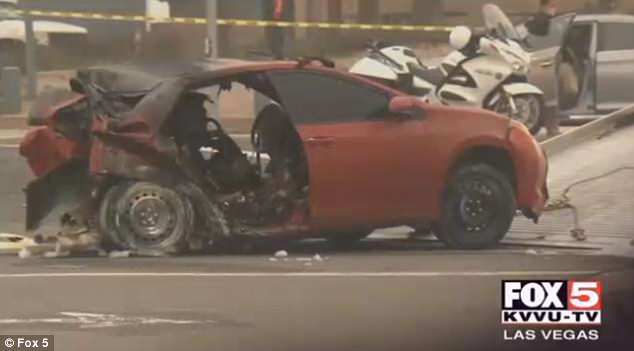 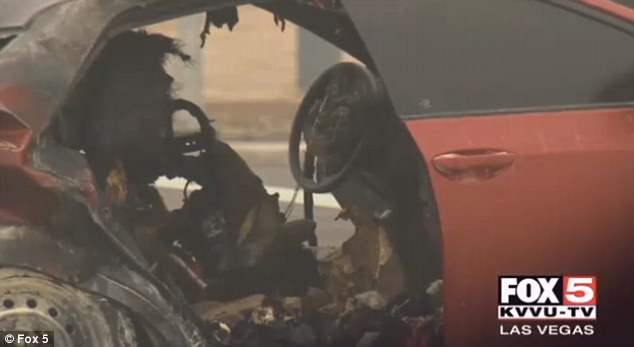 ‘When officers arrived on scene, they saw a vehicle on fire in the intersection. Huntington Beach Fire Department personnel responded to the location and put out the fire.

‘One occupant in the vehicle was transported to a local trauma center with unknown injuries, and is listed in stable condition.

Emergency services raced to the scene, which can be seen in a grab from footage from the aftermath of the incident 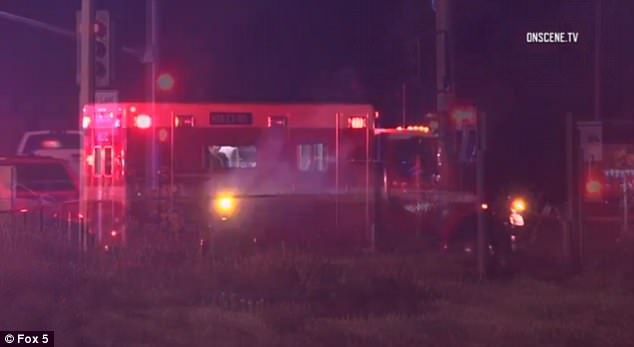 An ambulance attends the crash, which left three dead and one seriously injured

‘A female driver, Bani Duarte, 27, of San Clemente was arrested for Vehicular Manslaughter while Intoxicated and Driving Under the Influence Causing Injury. She was transported to the Huntington Beach Jail.’

Classmates, who were also in California for spring break, created a memorial at the crash site in the wake of the tragic event.

A candlelight vigil to remember Dylan, AJ and Brooke will occur at Knickerbocker Park on Friday at 6pm.