Three meals a day are best for obesity and diabetes sufferers

A blow out breakfast, ‘average’ lunch and small dinner may be the best combination for those suffering from diabetes or obesity, new research suggests.

Sticking to just three meals a day of varying sizes also reduces diabetics’ glucose levels and insulin requirements, as well as their hunger and carbohydrate cravings, the research adds.

Lead author Dr Daniela Jakubowicz, from Tel Aviv University, said: ‘The hour of the day—when you eat and how frequently you eat—is more important than what you eat and how many calories you eat.

‘Our body metabolism changes throughout the day.

Around 17 million people in the UK have diabetes, which may be undiagnosed. Type 2 diabetes, which is linked to carrying excess weight, affects approximately 90 per cent of sufferers.

A blow out breakfast, average lunch and small dinner may be the best combination for those suffering from diabetes or obesity, new research suggests (stock)

WHAT ARE THE FIVE NEW TYPES OF DIABETES?

For decades the disease has been considered to be two different forms – type one, an autoimmune disease in which people stop producing insulin, and type two, in which the body becomes resistant to insulin.

But now a major project in Sweden and Finland has found type two diabetes should actually be categorised as four different diseases.

The researchers, led by experts at Lund University, said the findings should prompt a ‘paradigm shift’ in the way people treat diabetes.

Cluster 1. Severe Autoimmune Diabetes – which until now has been known as ‘type one’ diabetes – is an autoimmune disease in which people stop producing insulin. Usually strikes in childhood but can emerge in adults. Requires insulin injections for life.

Cluster 5. Mild Age-Related Diabetes is the largest group, with 40 per cent of all patients, and consists mostly of elderly patients.

‘Adequate meal timing has a pivotal role in weight loss’

Results further suggest fasting glucose levels decrease by 54 mg/dl (from 161 to 107) in those eating three meals a day group compared to only 23 mg/dl (from 164 to 141) in those consuming six.

Healthy levels are considered to be less than 108 mg/dl.

Having breakfast as the main meal of the day also significantly reduces the need for insulin by -20.5 units/day (from 54.7 to 34.8) compared to those spread out throughout the day, which requires people have more 2.2 more units a day (from 67.8 to 70).

Overall amounts of glucose in the blood are also lower just 14 days after adopting a three meal a day eating plan.

Dr Jakubowicz added: ‘This study shows that, in obese insulin-treated type 2 diabetes patients, a diet with three meals per day, consisting of a big breakfast, average lunch and small dinner, had many rapid and positive effects compared to the traditional diet with six small meals evenly distributed throughout the day: better weight loss, less hunger and better diabetes control while using less insulin.

‘A diet with adequate meal timing and frequency has a pivotal role in glucose control and weight loss.’

The researchers analysed 11 women and 18 men with obesity and type 2 diabetes.

All of the study’s participants, who had an average age of 69, were treated with insulin.

They were split into groups, with some eating a large breakfast, a medium-sized lunch and a small dinner and others having six small meals evenly spaced throughout the day, including three snacks.

The diets, which contained an equal amount of calories, were followed for three months.

Glucose levels of the participants were measured throughout the study.

The findings were presented at the Endocrine Society conference in Chicago. 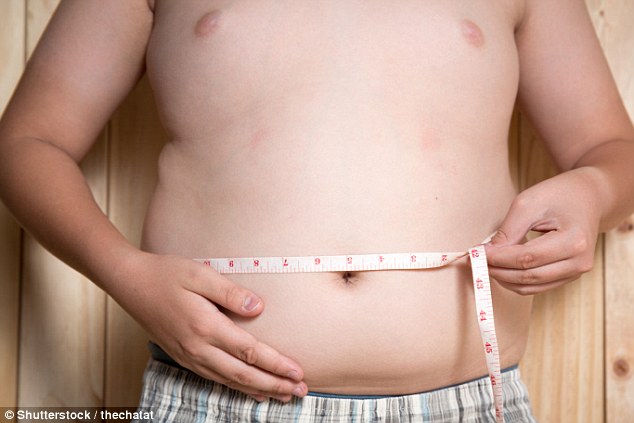 This comes after research released in June last year suggested a bottle of water a day that boosts youngsters’ ‘good’ bacteria may combat childhood obesity.

Water containing a prebiotic supplement should make obese children a healthy weight after just one year, a study found.

This is compared to a 17.6lb (8kg) weight gain among children receiving a placebo, the research adds.

Study author Professor Raylene Reimer from the University of Calgary, said: ‘Powdered fiber, mixed in a water bottle, taken once a day is all we asked the children to change, and we got, what we consider, some pretty exciting results – it has been fantastic.’

Prebiotics are indigestible food ingredients, such as fiber, that act as fertilizers to stimulate the growth of bugs in the digestive tract. Probiotics specifically introduce new bacteria into the gut.