Three men shot dead while on fishing trip in Florida after one rang his father and shouted ‘help!’

Three men are beaten and shot dead while on fishing trip in Florida as police reveal one man rang his father and shouted ‘help!’ before the ‘horrific’ murder

Police in Florida have issued a $5,000 reward for information after three men were killed in a ‘massacre’ while out fishing, with one of the men managing to call his father and cry ‘help’ shortly before he died.

Damion Tillman, 23; Keven Springfield, 30; and Brandon Rollins, 27, were described by their families as having been best friends for years, and all died in the Friday night attack.

Tillman traveled to Lake Streety first and arrived by himself, according to Grady Judd, sheriff of Polk County.

When Rollins and Springfield arrived soon after, Tillman was being beaten by unknown attackers, and the two friends intervened to help Tillman and were shot.

Rollins called his father at about 10pm Friday and managed to only say ‘help.’

The father jumped into his car and went to where his son had said he was going fishing.

‘When he arrived he found his son Brandon barely alive, and his two friends deceased,’ the sheriff’s office said in a press release.

‘Brandon was able to say a few things to his dad, which we are not releasing at this time.’ 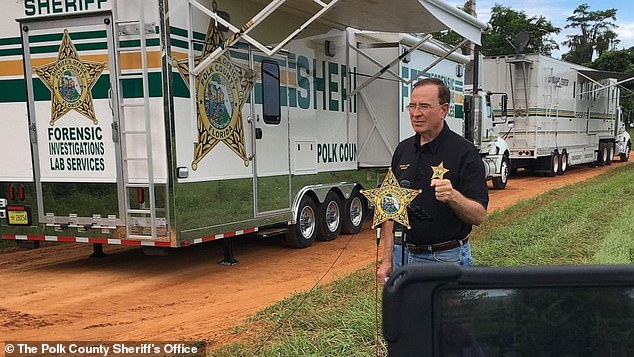 ‘This is a horrific scene,’ said Judd.

‘I’ve been to a lot of murder scenes in my life and this ranks among the worst I’ve been to.’

‘You don’t just stumble upon somebody out here,’ he said.

‘It’s not like there’s a lot of people around here.

‘As you can see, it’s cow pastures and lakes.’