Three more students have been diagnosed with adenovirus at the University of Maryland where one immunocompromised student died of the illness earlier this month, Fox45 has reported.

Adenovirus is a common and typically non-life-threatening virus, but it has proven deadly for people with weakened immune systems this year, including 11 children at a New Jersey care facility, and 18-year-old University of Maryland freshman, Olivia Paregol.

The university came under fire after Paregol’s family in Glenwood, Maryland, said the school failed to inform both her and her parents of her diagnosis and revealed that her dorm had been infested with mold.

Some students have blamed mold for Paregol’s death, but fungus does not cause viral infections and the University of Maryland is assuring its campus community and the public that it is taking precautions.

So far, none of the additional students with adenovirus have needed to be hospitalized, and will likely recover on their own as the virus poses little danger to healthy adults.

Another three students at the University of Maryland (pictured) have been diagnosed with adenovirus, the illness that killed one of their immunocompromised classmates last week

A little more than a week ago, Paregol died after contracting adenovirus, which she was more vulnerable to because she suffered from the autoimmune condition, Crohn’s disease.

Last Tuesday – two days after Paregol’s death – the University of Maryland (UMD) announced her death to its campus community and notified students, faculty and staff that five additional students had also been diagnosed with adenovirus.

The school had gone on ‘high-alert’ for the virus after discovering that one student (not Paregol) had one of the most dangerous strains, adenovirus 7.

Now, another three UMD students have tested positive for adenovirus.

At the beginning of the school year, in September, mold was discovered in several UMD dormitory buildings, forcing the school to move hundreds of students out temporarily.

Paregol’s father alluded to the mold problem when discussing his daughter’s death and her roommate, Jessica Thompson told CBS that mold was growing on their clothes and shoes in the dorm, and that she believed it made both girls sick.

Ian Paregol later clarified in an interview with CBS: ‘It didn’t help the illness. I think that’s a really fair statement. We don’t know that there’s causation, yet, but it didn’t help things.’

Respiratory symptoms from mold exposure are not dissimilar to those typical of adenovirus infections – coughing, sneezing, runny nose – mold cannot directly cause the virus, though it certainly could exacerbate symptoms. 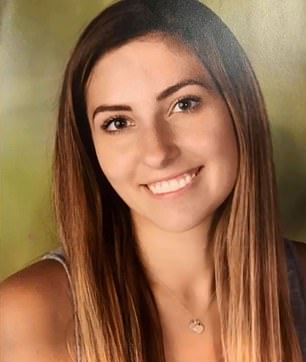 Olivia Paregol, an 18-year-old  freshman, died a little over a week ago after contracting adenovirus. The illness was likely more dangerous to her because she had Crohn’s disease

Adenovirus does spread easily in communal living areas, however, so dorms may be providing a convenient environment to the virus.

Its symptoms have subtle differences from those of mold exposure, and also include fever, sore throat and bronchitis, as well as pink eye, bladder infection, or diarrhea in some cases.

UMD is urging its students to keep an eye out for these symptoms and has alerted its own health center and those in the surrounding area of the outbreak to encourage testing.

Though it acknowledges the tragedy of Paregol’s death, the school is also asking students not to panic in light of these new cases of adenovirus.

‘None of these new cases has required hospitalization to our knowledge,’ University Health Center director David McBride told Fox45.

‘Please remember that adenoviruses are common causes of colds and are normally found in significant numbers of people at this time of year.

‘There are strains that can cause more serious illness, but not every individual with an adenovirus infection will follow a complicated course.’