Meet the three mothers who formed a unique bond after they each overcame life-threatening strokes.

Angie Jorgensen, Tamsen Butler and Sarah Conway, all from Nebraska, suffered strokes within a few years of each other.

After meeting at events for stroke survivors, the three formed a fast bond – even dubbing themselves Stroke Homies, or Stromies.

They are now joining forces as they relearn to walk, talk, care for their children and raise stroke awareness at events around the country. 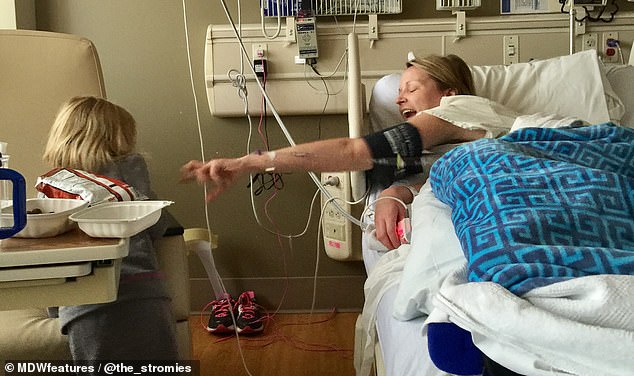 Angie, 52, suffered a stroke in December 2012 due to a rare tumor on her adrenal gland. Pictured: Angie in the hospital with her daughter at the time of her stroke 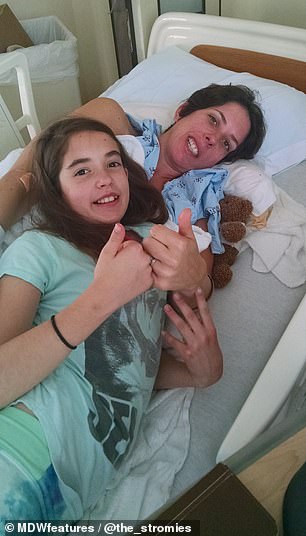 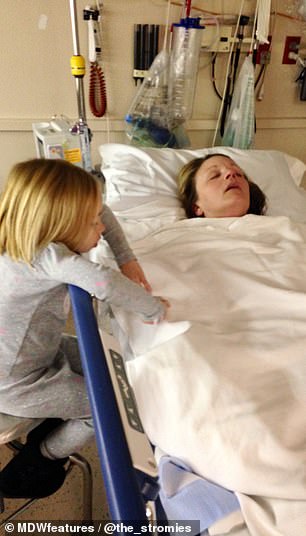 When Angie, 52, a sales director, suddenly went into cardiac arrest in December 2012, doctors said she had a five percent chance of survival.

Her family said their goodbyes as she slipped into a coma and her organs shut down.

She suffered a stroke due to a rare tumor on the adrenal gland called a pheochromocytoma, which she didn’t know she had.

After she was in a coma for a week, Angie’s heart unexpectedly began functioning normally and she woke up a few days later; unable to walk, talk or use her hands.

‘As the doctors went over what I had been through over the past week, my first thoughts were in thanking God that I could go to my daughter’s graduation and that this had to be some kind of miracle,’ Angie said.

Angie had a long road of recovery ahead of her. She spent three months in cardiac rehabilitation, a program to improve heart health after a heart-related issues, and wore a defibrillator vest to monitor her blood pressure.

Finally she was able to have surgery to remove the tumor that had taken over her adrenal gland.

‘Over the course of the year and one day at a time, I continued to recover,’ she said. ‘It has been a privilege to pay it forward with gratitude ever since.’ 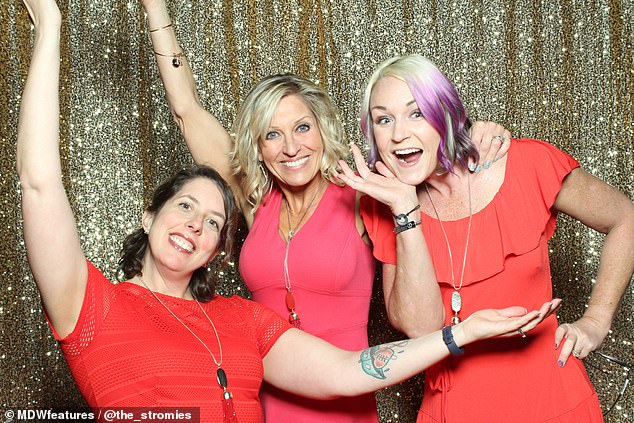 Angie and Tamsen were the first to meet at an event hosted by the American Heart Association and they both connected with Sarah via Facebook. Pictured, left to right: Tamsen, Angie and Sarah 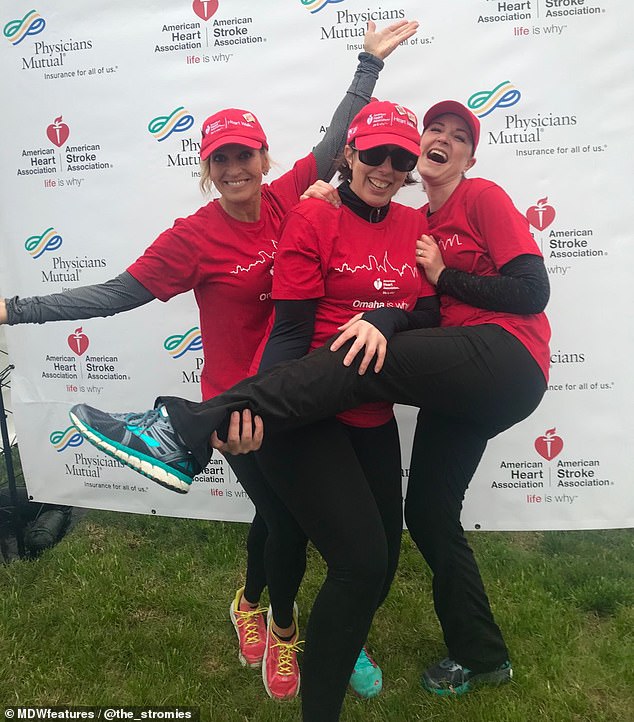 Tamsen, 44, a freelance writer and fitness instructor, suffered a stroke in July 2015 after a genetic mutation she didn’t know she had caused her blood to clot.

‘It was completely unexpected and was caused by holes in the heart I didn’t know I had and a genetic mutation that gives my blood a propensity to clot,’ she said.

As a result, she developed ‘scatterbrain’ tendencies that caused her to have temporary memory loss.

Angie and Tamsen were the first to meet at an event hosted by the American Heart Association and they both connected with Sarah via Facebook.

Sarah, 37, a stay-at-home mom, was already in the emergency room with her then-three-year-old daughter in December 2016, when she suffered an ischemic stroke, which occurs when arteries to the brain become narrowed or blocked.

Three days later, she had a hemorrhagic conversion – when an ischemic stroke turns into a hemorrhagic stroke after a weakened blood vessel bursts – and she spent five weeks in inpatient rehab.

The three mothers, who were all younger than the average age for stroke – which between 55 and 65 years old – and recovering better than expected, felt relieved to meet other women like them. 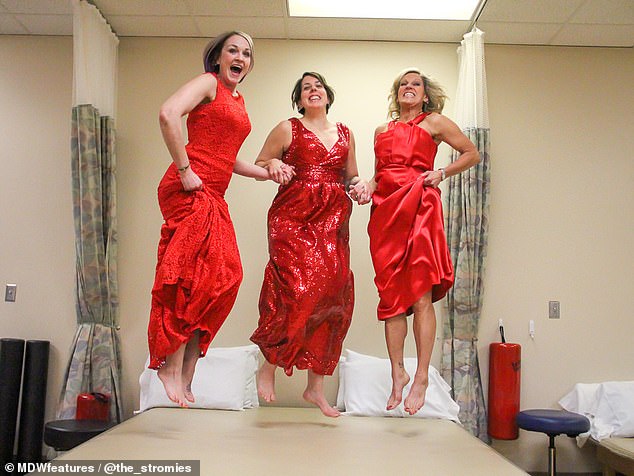 Sarah said she was ‘socially awkward’ before she became friends with the other women but now she is ‘much more outgoing and personable’. Pictured, left to right: Sarah, Tamsen and Angie 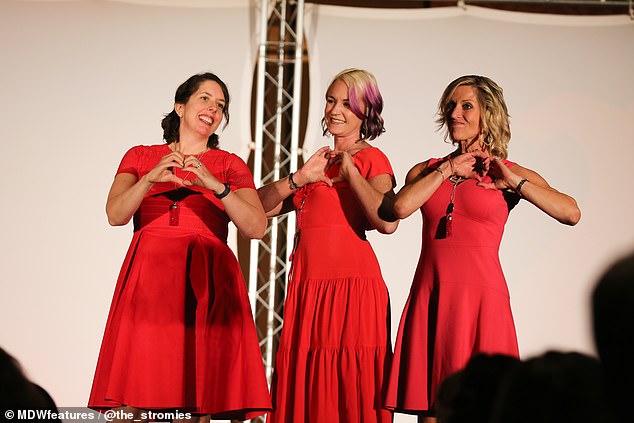 Tamsen that she developed ‘scatterbrain’ tendencies that caused her to have temporary memory loss after her stroke, which the friendship helped her recover from. Pictured, left to right: Tamsen, Sarah and Angie

‘We felt as though God brought us together. All three of us wanted to be able to provide others with the support that we desired while recovering after our strokes,’ Sarah said.

‘I was stuttering pretty badly when we first got together and somewhat socially awkward. My communication is now fluid and I am much more outgoing and personable.

‘I am able to use a lot of my marketing and public relations background to facilitate social media for the Stromies and it makes me feel worthwhile. It’s given me a sense of purpose.’

Tamsen said that ever since she formed a friendship with Angie and Sarah, she’s recovered from her ‘scatterbrain’ tendencies.

‘I know they’ve helped me recover because I was a lot more introverted post-stroke, but they drew me out of my shell,’ she said.

‘It’s a powerful thing to go from “stroke victim” to “stroke survivor advocate” and that’s what being a Stromie has helped me do.

Angie said the three of them now use their stories to remind other stroke survivors that there can be life after recovery.

‘The three of us have an understanding because of what we have gone through and that is a pretty special thing. It helps us on a tough day and we can certainly find the humor in it which is also a good thing,’ she said.

‘We are each able to use our strengths and differing personalities in a pretty cool way. Our connection has evolved and strengthened over time.’