There was a time, not so long ago, when the greatest happiness a new mother could wish for was eight hours’ sleep and an elasticated waist band.

Not so for an increasing number of today’s young mums, who — not content with shedding the baby weight — strive for stomachs so toned they have visible six-packs.

Where celebrities such as Cheryl Cole and Rosie Huntington-Whiteley lead the way — just weeks after giving birth, both flashed the sort of abdominal muscles usually seen only on world-class athletes — other mums follow.

Leading sports scientist Professor Greg Whyte, expert in the science of exercise before and after pregnancy, says: ‘There has been a massive increase in role models for new mums who are wonderful adverts for what can be achieved post-natally with your body.’

He warns, however, that women should be careful about the timescale they set themselves: ‘Just because one woman has a six-pack within a few months of giving birth, doesn’t mean it’s possible for everyone.’

So is a toned tum, rather than a mum tum, the impressive result of iron-willed discipline or the product of overweening vanity and questionable priorities? Here, Sadie Nicholas talks to three mothers who all sported six-packs within six months of giving birth…

Nicole James, 32, is a language teacher in a secondary school who lives in Bristol with her husband, a 31-year-old accountant, and their son Finn, seven monthsworked out after giving birth to build her body confidence

Nicole James, 32, is a language teacher in a secondary school and lives in Bristol with her husband, a 31-year-old accountant, and their son Finn, seven months.

Nicole says: ‘I didn’t have a six-pack before I became a mum and didn’t exercise at all in the lead-up to the birth as I was on bed rest for six months due to a weak cervix.

‘After the heartache of suffering a miscarriage in 2015, when I found out I was pregnant with Finn in July 2016, I immediately stopped my twice-weekly gym sessions and my bike rides to and from work, as I was eager not to do anything that could trigger another one.

‘But being ordered to my bed for months on end put me in a terrible panic. I assumed I’d balloon in weight and have to wave goodbye to my old slim figure.

‘Pre-pregnancy, I was a dress size six — I’m 5ft 6in tall — and my tummy was flat but not defined, probably because I never did any exercises specifically to target it. Although my main concern was for my unborn baby, I couldn’t help but picture myself with a wobbly belly, legs and bottom by the time he arrived.

‘Remarkably, given how inactive I was, I gained only 1st 7lb and almost the moment that Finn was born in February weighing 7lb 14oz, the midwife exclaimed: “Oh, your belly’s gone!”

‘But it wasn’t all good news. I weighed half a stone more than I did pre-pregnancy — and although my stomach had deflated, it was wobbly and my hips had widened so I couldn’t get into any of my trousers.

‘With no family nearby to help with Finn, I couldn’t go to the gym, so for the first few months I told myself to enjoy my baby and not worry about my body.

‘But by summer, I couldn’t stand having a flabby tummy any longer. It was affecting what clothes I could wear and I didn’t like looking down at rolls of flab.

‘I definitely didn’t want my husband to see it either. I might be a mother now but it’s still important for me to look nice for him.

‘Breastfeeding had helped me to lose those last few pounds of baby weight, but in a bid to build up the strength in my legs and core and to tackle my wobbly stomach, I started doing workouts at home using YouTube videos.

‘For the first time ever, I focused on doing countless sit-ups and crunches every day to target my tummy muscles.

‘To my amazement, by the time Finn was five months old my stomach was more defined than it has ever been, with a six-pack peeping out.

‘Two months on, it’s even more toned, probably because I get constant exercise from picking Finn up and carrying him around.

‘I’m back in my old jeans and figure-hugging clothes, and I get so many compliments from people who are amazed that it’s possible to have a very young baby and a toned stomach, too.

‘Others may assume that I’m vain, but I simply believe that as well as being a wife and mum, it’s important to look after myself too and to make sure I’m happy and healthy.’ 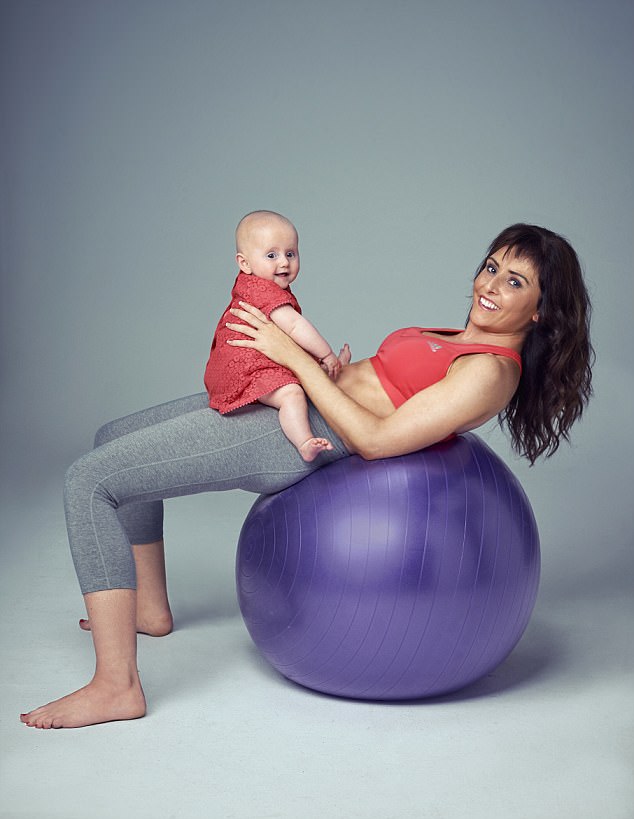 Siobhan Murphy, 32, a mental health support worker who lives in Barnoldswick, Lancashire, with her daughter Niamh, six months, worked for the six-pack after her partner left her just nine weeks after she gave birth

Siobhan Murphy, 32, is a mental health support worker and lives in Barnoldswick, Lancashire, with her daughter Niamh, six months.

Siobhan says: ‘A few weeks ago, I was in my gym kit and loading the dishwasher when a friend called round unexpectedly. She took one look at me and declared: “Wow, just look at your flat stomach! I can’t believe you’ve just had a baby!”

‘I felt triumphant as it’s only six months since my daughter was born. What’s more, five years ago a customer in the bank where I used to work asked me if I was pregnant when I wasn’t.

‘For years, my small pot belly had been out of sync with my otherwise slender size 10 frame. I’d always longed for a toned stomach but never thought I would achieve one — especially not after having a baby. 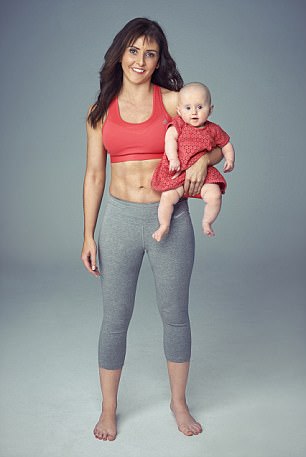 ‘Pre-pregnancy, I’d been a typical half-hearted gym goer, working hard for a few weeks then giving it up if something cropped up at work or home.

‘When I found out I was pregnant in August 2016, I weighed 8st 7lb, but within four weeks I’d piled on half a stone. I was terrified of how big I’d end up if I continued at that rate.

‘Thankfully, I was so busy working and rushing around renovating our home that I only put on 1st 7lb during the pregnancy. Just before I had Niamh by caesarean in March, I weighed 10st.

‘My motivation for whipping my stomach into shape came unexpectedly when, nine weeks after Niamh was born, my partner left me for someone else.

‘It was a devastating time, but after about six weeks of feeling depressed, I reasoned that I needed to return to the gym with a vengeance.

‘I wanted to start the process of feeling stronger, and give myself a mental lift after the stress of the break-up.

‘My mum and friends rallied to offer to babysit, and back in the gym, instead of doing endless boring cardio like I used to, I hit the weights, having seen others using them with their personal trainers.

‘Although my aim was to tone up my stomach by doing lots of sit-ups and crunches while holding weights, I certainly never imagined that I would cultivate a six-pack.

‘So I was delighted when, after just a few weeks, I started to notice definition on my stomach that I’ve never had before.

‘It was all the motivation I needed to carry on — and now I purposely work my abdominals every time I go to the gym, which is three or four times a week.

‘It’s not just vanity though — I feel physically and mentally stronger, too. I had no idea what to expect from my body after having a baby, but I certainly didn’t contemplate having washboard abs! 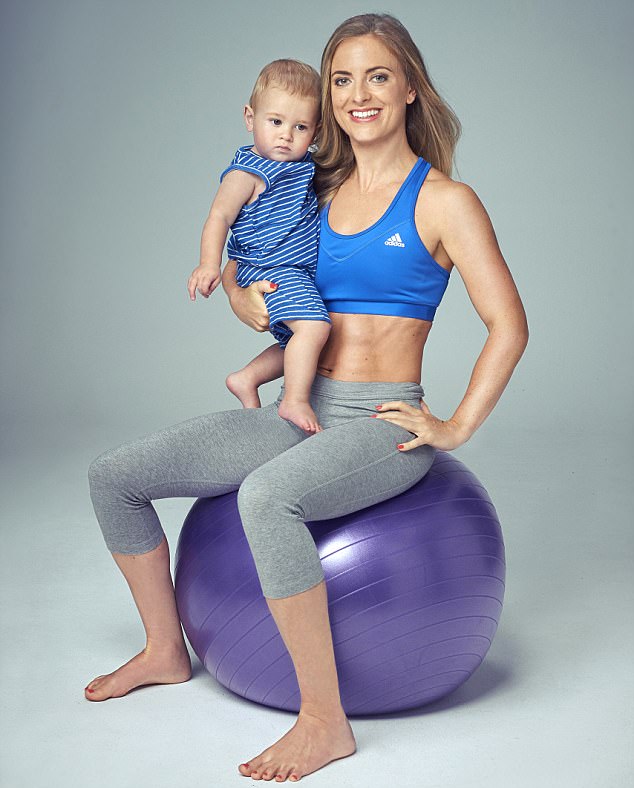 Josephine Schryver, 32, a social support worker who lives in Surrey with her partner Rob Shaw, 35, and their one-year-old son Ernie, was a work-out fanatic who ‘couldn’t wait’ to start exercising again after giving birth

Josephine Schryver, 32, is a school support worker who lives in Surrey with her partner Rob Shaw, 35, a project manager, and their son, Ernie, 12 months.

Josephine says: ‘Having a stomach that’s flat enough to iron Ernie’s baby grows on wasn’t something I imagined would be possible after pregnancy — let alone within six months of giving birth.

‘Yet by the time Rob took a photo of me wearing my bikini on a Cornish beach this summer with Ernie on my hip, I was the proud owner of one.

‘Before pregnancy, I’d trained in the gym five times a week, eaten healthily and was a size 8-10. And although I had a flat stomach, there was no six-pack.

‘When I became pregnant, I continued to exercise gently and kept up my careful diet — I only gained a stone by the time I was full term — but I fully accepted that I might get stretch marks or that my abdominal muscles might part beyond repair. I had even warned Rob not to expect me to look the same. 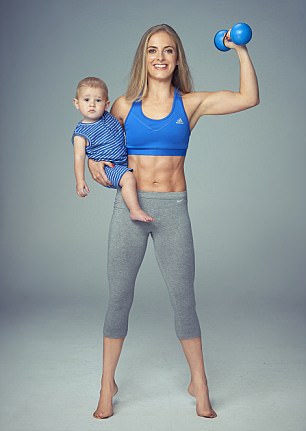 Before giving birth, Josephine would train at the gym five days a week

‘When I had Ernie, I couldn’t wait to start exercising again — not just for myself, but in order to be as fit and healthy as possible for his sake. I was determined to push my body that bit harder now: I told myself that no workout would ever be as hard as being in labour!

‘But I was sensible and eased myself back into exercise with weekly hot yoga classes. I only started training properly again when Ernie was six weeks old.

‘As a new mum, I can only manage one session a week in the gym with a personal trainer, so I invested in weights, a pull-up bar, and a squat rack which I use for weight training when Ernie naps.

‘I do a mixture of HiiT (high intensity interval training), circuits, weights and CrossFit — an intense strength and conditioning regime — and swim regularly in the pool at my parents’ home in Surrey with Ernie. Yet despite my determination, the last thing I expected when Ernie was three months old was to look in the mirror and see signs of a six-pack.

‘People constantly ask how on earth I’ve got into this shape so quickly. And there’s no one more surprised than me!

‘But I haven’t put myself under pressure or done any silly diets to achieve this, I’ve just pushed myself harder with exercise.

‘I still have porridge for breakfast, homemade turkey burgers with salad for lunch, and a homemade curry or stir-fry for dinner, with snacks of nuts, fruit and yoghurt.

‘And once a week I have a blow-out on chocolate and ice-cream.

‘Rob is really proud of me, and it is such a confidence boost that he loves the way I look now that I’m a mother. There’s no reason why ordinary mums can’t have post-baby bodies to rival those of glamorous celebs.

‘The days of women using motherhood as an excuse to lose their figures are long gone.’