Three people have tragically died and five others are in a serious condition after a car smashed into a power pole before colliding with a truck on the Gold Coast.

Emergency services were called to a multi-vehicle crash site on the corner of Arundel Drive and Brisbane Rd just after 12.20pm Thursday.

Three people died at the scene and a 49-year-old man was taken to hospital in a serious but stable condition, reported The Gold Coast Bulletin.

Police say three people were killed after travelling eastbound in a black sedan before the vehicle veered onto the wrong side of the road and struck the front of a truck.

A 49-year-old male passenger of the sedan was rushed to Gold Coast University Hospital in a serious but stable condition.

Nine patients were reportedly assessed at the site of the collision, according to Queensland Ambulance spokesman Andrew Flory.

The man travelling in the second vehicle – a truck towing a boat – has escaped the incident unharmed.

Another vehicle was struck by a falling light post, with both occupants uninjured and requiring no further medical attention.

Witnesses were treated for shock by paramedics at the scene, but did not require hospitalisation. 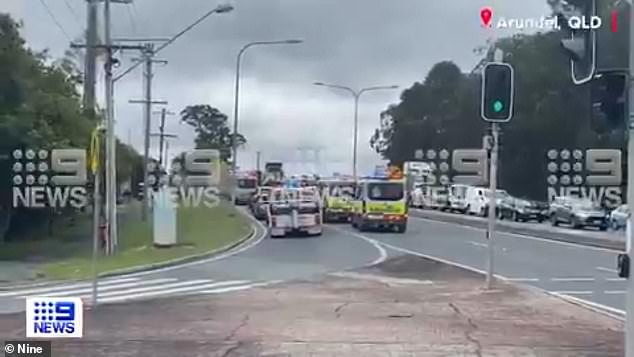 Traffic is currently being diverted from Arundel rd with motorists encouraged to avoid the area if possible.

Earlier multiple paramedics including critical care and the High Acuity Response Unit arrived at the crash scene involving three fatalities and five others in serious conditions.

Fire crews required ‘cutting tools’ to free one patient from their vehicle.

Queensland police are now working to identify the families of the victims who died.