A helicopter has crashed northeast of San Francisco, killing all three passengers on board.

The Bell 206 chopper, which was carrying PG&E contractors, hit a 115,000-volt power line and burst into flames outside of Fairfield shortly after 1pm on Tuesday.

The contractors had been working on the high-voltage lines prior to the crash.

Fire from the helicopter sparked a seven-acre grass fire that caused smoke to billow across the skies for hours.

Three people were killed in a helicopter crash northeast of San Francisco on Tuesday when the aircraft hit a 115,000-volt power line and burst into flames 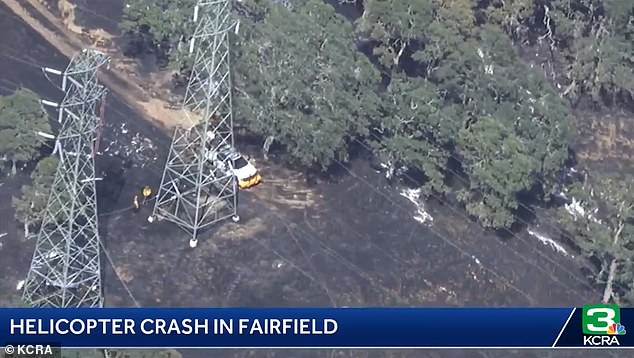 The passengers were working on power lines in the area. The crash caused a seven-acre grass fire and 38,000 PG&E customers are currently affected by a power outage

Three firefighters were reportedly injured while responding to the accident, when their water tanker overturned en route to the scene.

KCRA Sacramento also reports that 36,000 PG&E customers in surrounding areas were affected by power outages caused by the crash.

The Federal Aviation Authority and thee National Transportation Safety Board confirmed the incident Tuesday afternoon and are now conducting an investigation.

They did not provide the names of the three passengers who were on board .

The incident comes four months after basketball legend Kobe Bryant was killed in a helicopter crash alongside his daughter and seven others in Southern California. 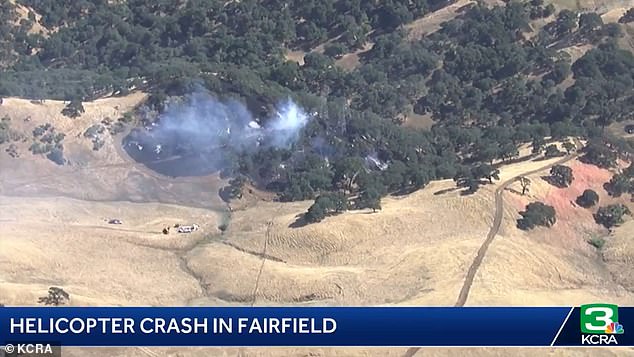 Smoke was seen billowing from the crash site outside of Fairfield, California. The city is located around 50 miles northeast of San Francisco