A 14-year-old girl found dead in a creek had been stabbed with a machete and beaten with a baseball bat by a group of teenagers who believed she was going to tell police about a crime they’d committed a day earlier, authorities have said.

Three minors – including a girl, 14 – have been arrested and charged with adult counts of first-degree murder, police in Prince George County, Maryland, announced on Thursday.

Investigators identified the victim as Ariana Funes-Diaz. They believe she was killed by 16-year-old Josue Fuentes-Ponce, Joel Escobar, 17, and 14-year-old Cynthia Hernandez-Nucamedi in an MS-13 related killing.

A fourth suspect remains at large, police said, but the person of interest has not been publicly identified.

The body of Ariana Funes-Diaz, 14, was found in a creek on Wednesday, after she was murdered with a machete and a baseball bat on April 18

Funes-Diaz’s body was found in a wooded area in Riverdale on Wednesday morning, just less than a month after she was first reported missing.

An autopsy confirmed her cause of death as a blunt force trauma to the head and it was ruled a homicide.

On April 18, police believe the three arrested suspects – and the unidentified fourth – drove with the victim to an apartment complex in the 6300 block of 64th Avenue in Riverdale.

It’s reported that the teenage suspects all believed Funes-Diaz was going to go to police and report a crime they had all been involved in the day before, in Washington DC.

Authorities have said the crime was a gang-related kidnapping in which a man was snatched from near a Metro station, taken to an abandoned house and robbed.

Police say two people were arrested in that crime but declined to specify who.

‘What we believe took place was that they were afraid she was going to go to the police department or the authorities and say what took place in a crime they were involved in,’ Maj. Brian Riley of the Prince George’s County Police Department said. 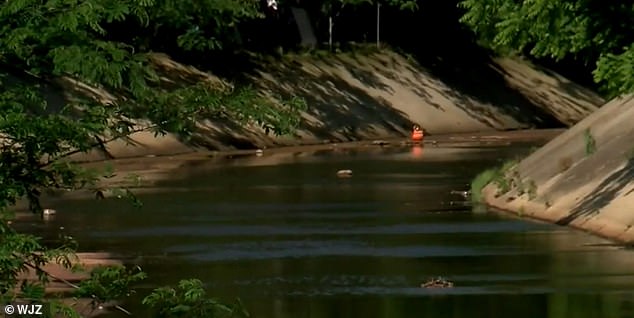 On April 18, police believe the three arrested suspects – and the unidentified fourth – drove with the victim to an apartment complex in the 6300 block of 64th Avenue in Riverdale (pictured: Brier Ditch creek where Funes-Diaz’s body was found)

As a result, Riley says Fuentes-Ponce, Escobar and Hernandez-Nucamedi escorted Funes-Diaz into the woods, where they allegedly brutally attacked her with a baseball bat and a machete.

Riley added that each of the suspects are members of a Mara Salvatrucha network – known as MS-13 – who are based in Prince George County.

‘This is not two gangs that are warring with each other,’ Reilly said. ‘This is a gang that turned on its associate.’

The boy had been stabbed more than 100 times, before his body was dumped in a river and set on fire, according to police.

He was said to have been killed after meeting with an MS-13 gang leader on March 8 who question Chicas’ ‘loyalty to the gang’, arrested documents show.

When asked about if there had been a rise in gang-related violence, police said they hadn’t noticed a surge. 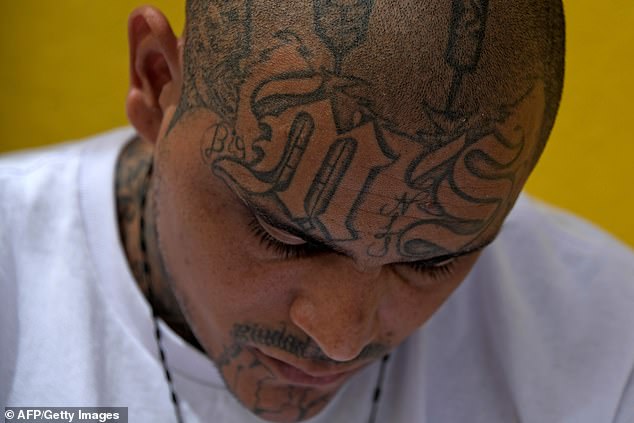 MS-13 began in Los Angeles in the 1970s but spread to El Salvador and other countries in Central America after some members were deported for their crimes in the 1990s. There other murders have been linked to MS-13 since the start of they year (pictured: Incarcerated gang members with MS-13’s logo tattooed on his forehead)

Two other murders have been attributed to MS-13 in the Washington metro area this year.

‘It’s violence that’s disturbing,’ Reilly said, ‘and they’re not afraid to use it on their own to send a message.’

Fuentes-Ponce, Escobar and Hernandez-Nucamedi have all been charged with first-degree murder.

Escobar and Hernandez-Nucamendi are being held in the custody of the Department of Corrections without bond.

Ponce is in custody at the Cheltenham Youth Detention Center.

If anyone has information relevant to this investigation, they are asked to please call detectives on 301-772-4925. Anyone wishing to remain anonymous may call Crime Solvers at 1-866-411-TIPS (8477), or go online at www.pgcrimesolvers.com.