A three-year-old girl has been anointed the new ‘living goddess’ of Kathmandu by Hindu priests and taken to a palace where she will remain until she reaches puberty.

The new Kumari – or living goddess – Trishna Shakya was taken from her home in the Nepali capital to the ancient Durbar Square for a short initiation ceremony before being moved into the temple-palace where she will live under the care of specially-appointed guardians.

The ceremony took place on the eighth day of the two-week-long Dasain festival, the main religious festival in Nepal.

Secluded life: As the Kumari, Trishna Shakya, three, will only be allowed to leave the temple 13 times a year on special feast days

‘I have mixed feelings. My daughter has become the Kumari and it is a good thing. But there is also sadness because she will be separated from us,’ her father Bijaya Ratna Shakya told AFP.

Shakya leaves behind a twin brother, Krishna, who cried as his sister was taken from the family home.

As the Kumari, Shakya is considered the embodiment of the Hindu goddess Taleju and will only be allowed to leave the temple 13 times a year on special feast days.

At midnight, Hindu priests will perform an animal sacrifice, which the new Kumari will attend as part of her initiation as a ‘living goddess’.

Historically, 108 buffalo, goats, chickens, ducks and eggs were slaughtered as part of the ritual – a number considered auspicious in Hinduism – but the number has been scaled back under pressure from animal rights activists. 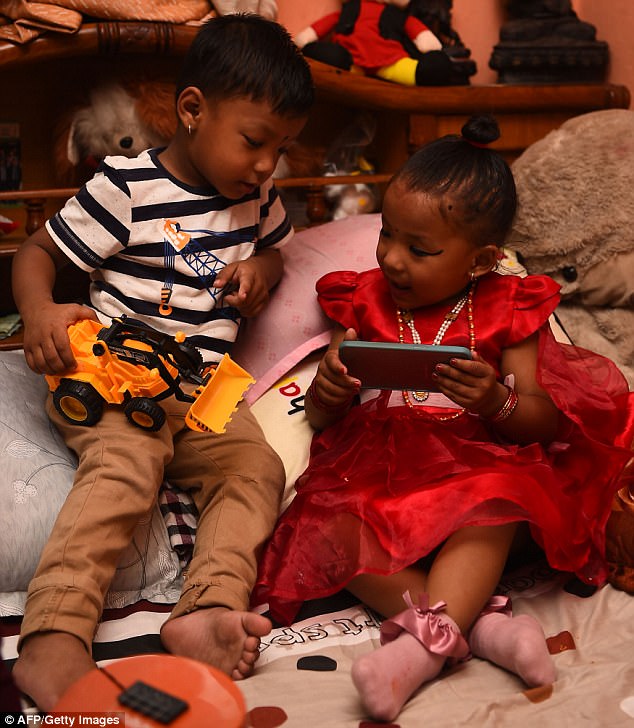 Separated:  Trishna plays with a smartphone next to her twin brother, Krishna, who cried as his sister was taken from the family home 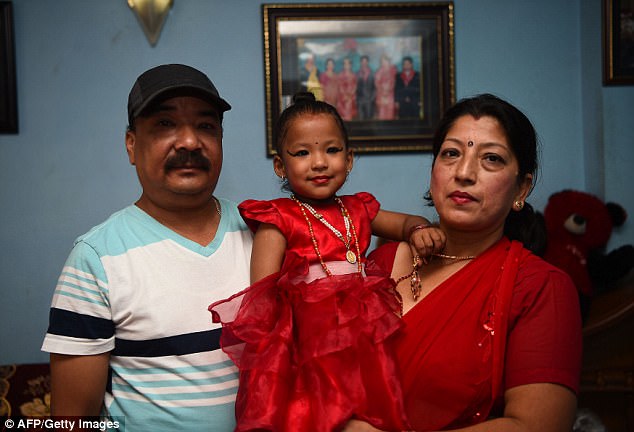 Pride: Trishna poses with her grandparents as she prepares to be the new Kumari 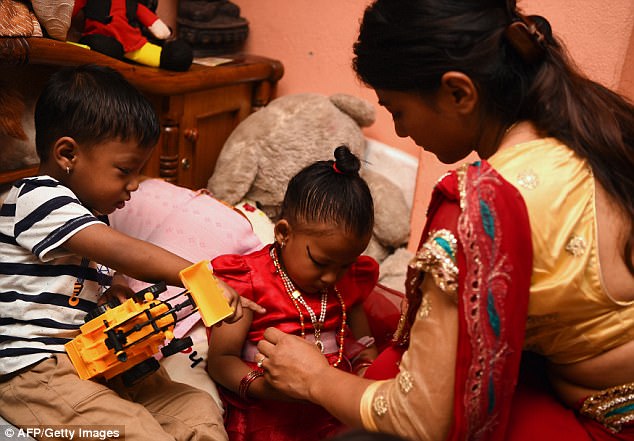 Trishna’s mother Srijana Shakya adjusts her daughter’s dress before she leaves their home, where she will not return until she is 13 years old 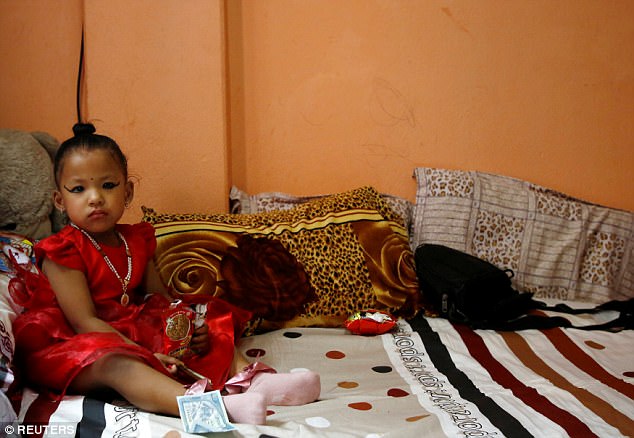 New life: After the initiation ceremony, little Trishna will more into the temple-palace where she will live under the care of specially-appointed guardians until she reaches her teens

The tradition of the Kumari, meaning princess in Sanskrit, comes from the Newar community indigenous to the Kathmandu Valley.

It blends elements of Hinduism and Buddhism and the most important Kumaris represent each of the three former royal kingdoms of the valley: Kathmandu, Patan and Bhaktapur.

The practice was once closely linked to the royal family, but has continued despite the end of Nepal’s Hindu monarchy in 2008.

Selection criteria for aspiring Kumaris is strict and includes a number of specific physical attributes such as an unblemished body, a chest like a lion and thighs like a deer.

Even if a girl fulfils all the physical requirements, she must then prove her bravery by not crying at the sight of a sacrificed buffalo. 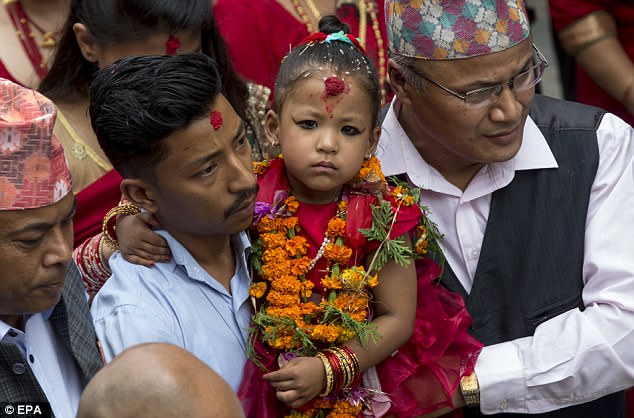 Holy child: The Kumari is considered the embodiment of the Hindu goddess Taleju and worshipped in Nepal 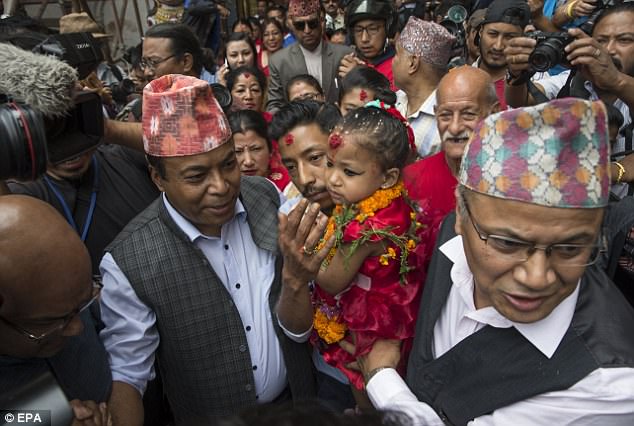 The tradition has drawn criticism from child rights activists who say the Kumaris are denied a childhood and their isolation from society hinders their education and development.

In 2008, Nepal’s Supreme Court ruled the living goddesses should be educated and they are now taught inside the palace where they live and are allowed to sit their exams there.

Many former Kumaris have spoken about the struggles they face reintegrating into society after they are dethroned.

The outgoing Kumari, Matine Shakya, 12, left the temple-palace via a side door shortly after the younger girl arrived to take the throne.

Matine still wore the red Kumari makeup, which includes a ‘third-eye’ painted on her forehead, and the ornate robes of the goddess.

The 12-year-old was carried on a sedan chair back to her family’s home, which she left aged three in 2008 when she was anointed as the Kumari.