This is the heartwarming moment a girl was reunited with her beloved stuffed wold toy after it was lost during a house move.

Three-year-old Avalon Mulcahy and her family relocated from their home in California to Hawaii after her father moved to a different military base.

They spent time in two temporary lodgings before finally making the big move to his new base. 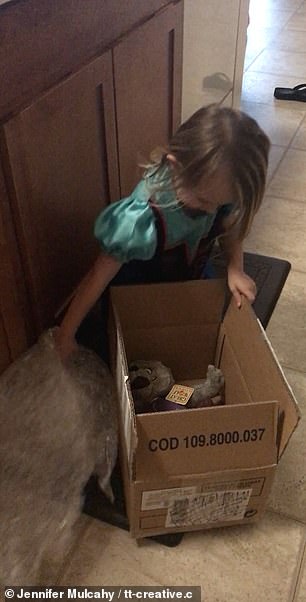 Mother Jennifer Mulcahy records her daughter Avalon (left and right) unboxing the beloved toy at their new home in Hawaii. Avalon is overwhelmed as she tears off the packaging to uncover the wolf stuffed toy named Violet

But along the way, with the multiple house moves, Avalon’s beloved soft toy, Violet, went missing.

And despite her mother’s best efforts to try and locate her, they never did.

Avalon kept asking her mother where Violet was – even hoping Santa would bring her one for Christmas. 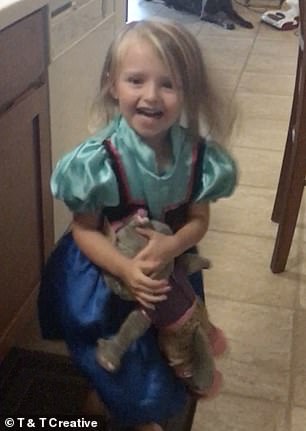 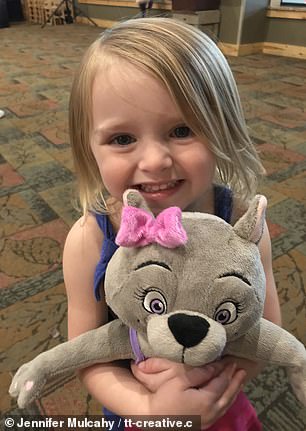 Avalon clutches Violet (left) before breaking down into tears. Mother Jennifer said she thought Avalon would find another toy to latch onto but she wanted Violet

Her mother Jennifer looked online, but the toy – which they had bought at Great Wolf Lodge Anaheim, California, an activity centre for children – wasn’t available online, only in store.

Jennifer contacted the store to see if one could be shipped to their new address and one arrived the next day.

Footage shows an excited Avalon giggling as she clutches a cardboard box – unaware what is inside it. 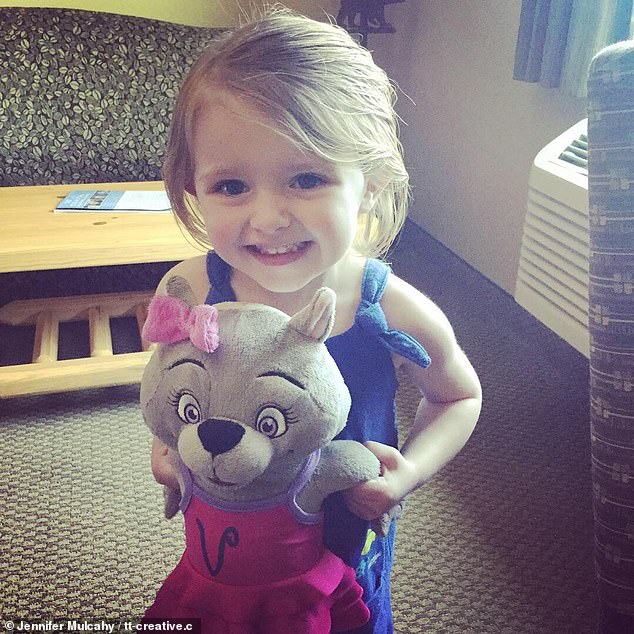 Mother Jennifer said: ‘I told them how important Violet was to Avalon and asked if there was any way that they would allow me to purchase a new Violet online’

Her mother tells her to ‘go ahead’ and open the box to which Avalon tears off the plastic wrapping to uncover her beloved toy.

An overjoyed Avalon lets out a high-pitched scream as she realises she’s been reunited with Violet.

And as an extra surprise, the company even packed Violet a wardrobe essential as Avalon exclaims: ‘It’s her dress!’

Moments later Avalon breaks down into floods of tears as she holds Violet close to her chest.

In a special message to camera, Violet says thank you to the company for sending her a new wolf toy and explains how much she loves the bear.

‘In fact, the original Violet was loved on so much that I had to bust out the needle and thread a couple times to make repairs.

‘Violet would ride to school with Avalon and when I dropped Avalon off, she insisted that I buckle Violet in for the ride home.’

She added: ‘We are a military family that recently relocated due to military orders.

‘When Violet went missing, I thought that Avalon would find another animal to latch onto. I was wrong, very wrong.

‘I dragged every box and bin out to search for Violet on more than one occasion.

‘I called the last lodging facility we were at to see if they found it. Nothing.’

She continued: ‘In desperation after Avalon said that she hoped Santa would bring Violet back, I wrote to the company that makes Violet.

‘I told them how important Violet was to Avalon and asked if there was any way that they would allow me to purchase a new Violet online.

‘I received a wonderful reply asking for our new address and stating that they were sending Violet overnight express.

‘Violet was so happy to be reunited.’