The parents of a three-year-old girl with cancer in her spine have launched an appeal for money to pay for pioneering treatment in the US.

Anna Lawson, from Great Yarmouth, was first given a diagnosis of a medulloblastoma, a brain tumour that develops in the back of the skull, in December 2017.

Just 36 hours later, to the shock of her parents Elizabeth, 33, and Ben, 32, Anna was wheeled into emergency surgery.

After 15 weeks of intense chemotherapy she rung the bell as she left hospital in June 2018, after spending five weeks isolated in a room for her protection.

But in February this year, while the family were celebrating Mrs Lawson becoming pregnant again, Anna’s doctors phoned from the hospital with devastating news.

Anna’s cancer had returned in her spine and was more aggressive – something they noticed in routine scans.

The only option is radiotherapy treatment which has a 20 per cent chance of success, which Anna is currently having.

Mr and Mrs Lawson are desperately appealing for funds to take Anna for more treatment because they fear the NHS will soon resign Anna to palliative care.

Anna Lawson, from Great Yarmouth, endured 15 weeks of chemotherapy to treat a rare brain cancer only for the disease to return in her spine just seven months later. She is pictured with her parents Elizabeth, 33, and Ben, 32, at the beach 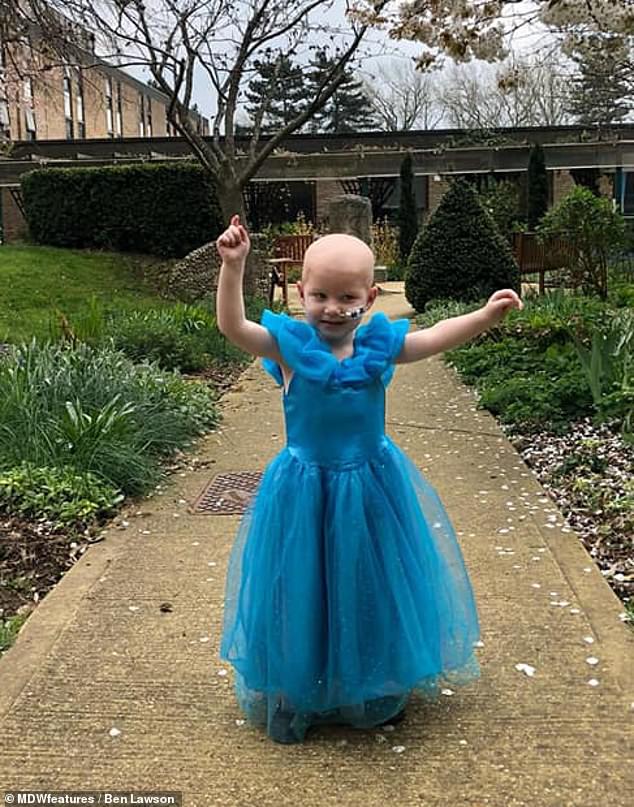 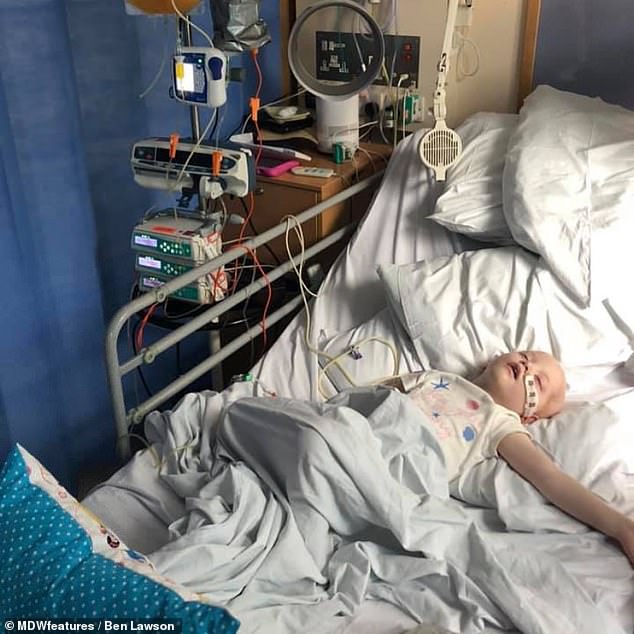 Anna rung the bell for the end of her treatment in June 2018, after having five cycles of chemotherapy and spending five weeks confined to a pressurised room. Pictured during treatment in hospital in June

Mr Lawson said: ‘We understand more than most that time is precious, and as a result we are focused on doing the things Anna loves to make up for all the horrible things she has to endure.

‘Because Anna is so young, we have to put on a brave face so as not to burden her with the emotional consequences of what is happening.

‘On the occasion that you do slip up, there is nothing worse than having your three-year-old with cancer trying to console you.’

In November 2017, operations management leader Mr Lawson and his wife noticed Anna was experiencing headaches, loss of appetite and loss of balance.

Having taken Anna to the GP and A&E on several occasions, the symptoms were attributed to a viral infection.

Mr Lawson said: ‘We had been to the GP and A&E and it was accounted as being ear/chest/viral infections. This seemed logical at the time, and of course more likely.

‘The symptoms persisted on antibiotics, and finally Anna awoke from an eighteen-hour sleep with one of her eyes pointing off to the side.’

With Anna’s symptoms worsening, her parents took her to the hospital again.

A doctor decided to perform a CT scan on her head with a significant mass being identified. 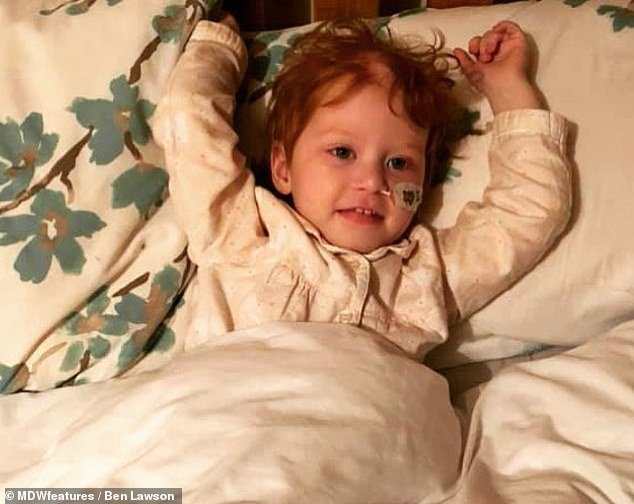 In November 2017, Anna was experiencing headaches, loss of appetite and loss of balance. Pictured at the beginning of her cancer before losing her hair

Within a couple of hours, the family were taken by ambulance to another hospital in Cambridge, where she underwent a MRI scan.

Medulloblastoma is a fast-growing, high-grade tumor.

Approximately 70 percent of all cases occur in children under age 10.

Treatment consists of surgical removal of the tumor followed by radiation, and then chemotherapy.

According to the American Brain Tumor Association, the five-year survival rate, or what per cent of children live at least five years after the cancer is found are:

Mr Lawson said: ‘Anna was put on steroids straight away to reduce the swelling and there was a noticeable improvement in her.

‘We were sat down with Anna’s oncology consultant and a consultant neurosurgeon. They were confident based on the images that the tumour was a medulloblastoma.’

Numerous tests confirmed that Anna had a medulloblastoma, the most common brain tumour in children.

Between 250 and 500 children in the US are diagnosed with medulloblastoma each year, and less than 90 in the UK, according to charities.

Brain tumours have an overall survival rate of 75 per cent, but because they are one of the most common tumour types, they account for the highest number of deaths, according to Children With Cancer UK.

Mr Lawson said: ‘I initially didn’t break down. I was almost in disbelief; this couldn’t be happening to my child.

‘I called Lizzy’s and my parents. That first call I just broke down – telling someone made it sink in.

‘They [the doctors] explained that Anna would need surgery immediately to remove the tumour, followed by chemotherapy.

‘The operation would be lengthy and carry serious risk of Anna dying or being paralysed. We signed the consent form there and then, we had no choice.

‘The truth is this was a whirlwind, we didn’t have time to digest what was happening, we just had to go along with the guidance from the medical teams.’

On the morning of the operation, fearing she might not survive the surgery, they spent the day making Christmas tree decorations, playing games and trying to take in every moment with Anna. 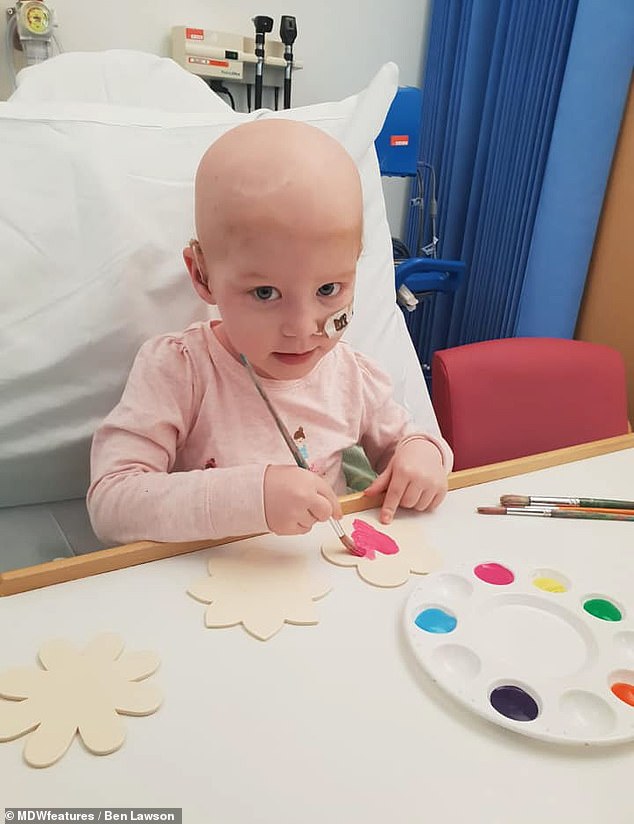 Anna, pictured in hospital, was taken into surgery to remove the brain tumour just 36 hours after the diagnosis, giving her parents no time to digest what was happening 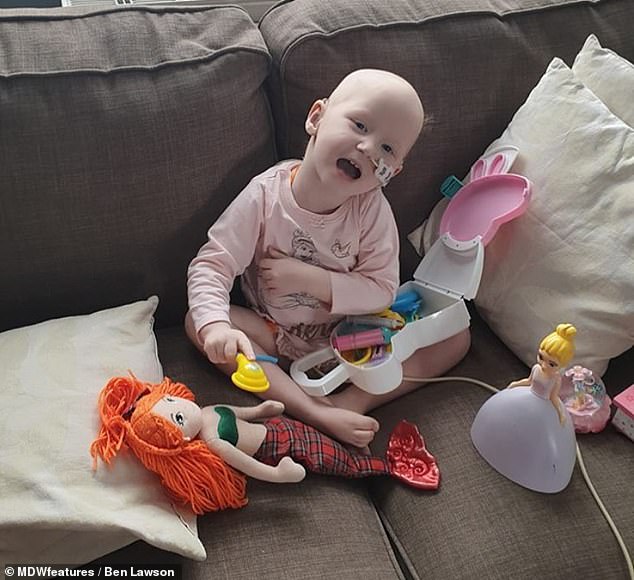 Anna was given high doses of chemotherapy which gave her side effects including the need for hearing aids and glasses and regular physiotherapy. Pictured with her dolls

Mr Lawson said: ‘I remember the day of Anna’s operation very clearly. We woke up early with Anna so that we could play together for as long as possible.

‘We treated that morning as if we may never see Anna, or the Anna we know, ever again.’

At lunch time, Anna was taken down for a nine-hour surgery, only 36 hours after the mass was identified.

To their relief, Anna survived the surgery, however complications followed, with Anna having a lengthy stay in hospital before chemotherapy could start.

Five gruelling rounds of chemotherapy followed, each lasting three-weeks, culminating in a high-dose chemotherapy which kept Anna confined to a pressurised room in confinement for over five weeks.

In June 2018, Anna rang the bell to signal the end of treatment after they were told there was no evidence of disease.

Anna has significant side effects form the treatment, including the need for hearing aids and glasses, regular physiotherapy. She also would not be able to have children in the future with the treatment destroying her fertility.

But the family tried to look forward and regain some normality, with Anna having follow-up scans to check for signs of a relapse every three months.

On February 3, 2019, Elizabeth discovered she was pregnant with their second child after suffering a miscarriage on Anna’s birthday in November 2018.

They were over the moon and Anna was excited to have a sibling.

However, a day after they discovered she was pregnant, their world came crashing down all over again.

Mr Lawson said: ‘On February 4, 2019, she started nursery again, we picked her up on the high of her being back and Lizzy being pregnant again. Then at around 3:30pm we got the usual call to say what the scan had found.

‘This time it was Anna’s consultant who called and said it had come back and spread to her spine and that we needed to have a discussion the following day about the next steps.’

Mr and Mrs Lawson were given two options; one was to go home with Anna and stop treatment.

The other was to give Anna radiotherapy to her head and spine; an option that Mr and Mrs Lawson were told would have a devastating impact on Anna’s development both mentally and physically due to her tender age.

This option only had a 20 per cent chance of success, but they decided to go with it.

She has since undergone six weeks of radiotherapy, each session requiring a general anaesthetic, and more recently commenced the first of four rounds of chemotherapy.

Mr Lawson said: ‘But we are slightly delayed at the moment as she has had a nasty viral infection, a fungal infection on her lung and shingles. She is trying her absolute best though.’ 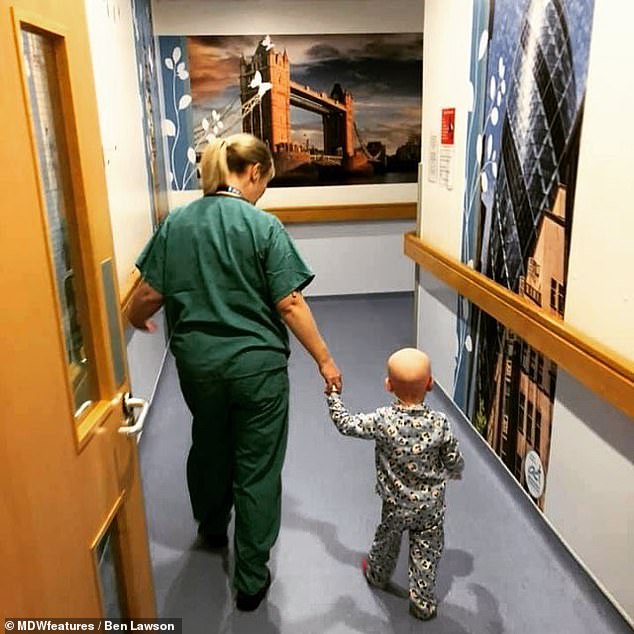 Doctors phoned to say Anna’s cancer had returned in February 2019, just a day after Mrs Lawson revealed she was expecting another child. Anna pictured in hospital 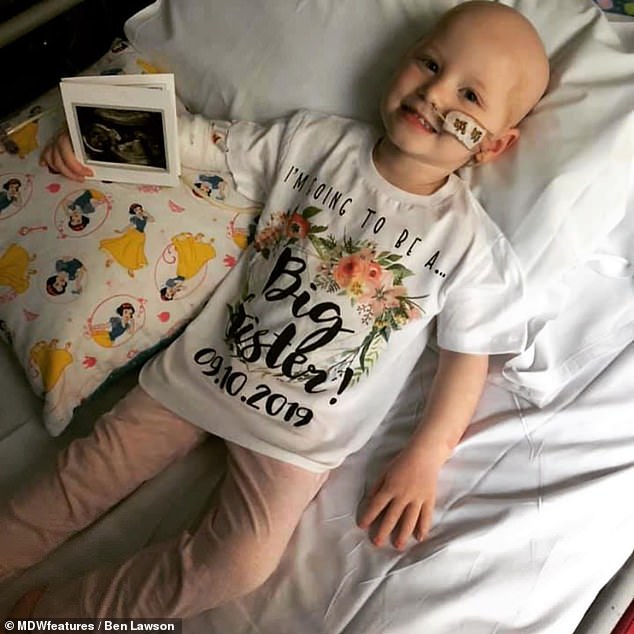 The couple aim to do everything they can to make Anna happy and make as many memories as possible. Their wish is to take her on holiday to Disney World in Florida because Anna ‘would wear a princess dress every day given the opportunity’.

Mr and Mrs Lawson have decided to share Anna’s story via social media to help raise awareness and raise funds via a JustGiving page.

They hope to take Anna abroad for immunotherapy treatment to prevent a further relapse. But it is not clear what their options are or what the outcome of her current treatment is.

Mr Lawson said: ‘We have spoken to other parents in our position and understand that America has several different options for further treatment should radiotherapy be unsuccessful.

‘We are not sure of the exact costs needed until we know which trial would work best but we know it will all need to be self funded.

‘For anyone wanting to help, we would of course be grateful for donations, but there are so many other great charities available to support families like ours, and of course there is the opportunity to donate blood and become a stem cell donor.

‘Although we understand childhood cancer is rare, regularly being on a ward with other families and their children who are also fighting for their lives, it doesn’t feel that rare to us, and we know that more money is urgently needed to help in finding a cure.’

Anna is excited to have a sibling which is bittersweet for her parents.

Mr Lawson said: ‘She asks every day when is baby going to be here and she is always chatting and singing to Lizzy’s baby bump.

‘It is heart-warming and heart-breaking watching Anna practise being a big sister to her dollies when the future is so uncertain.’

For more information and to donate, visit the family’s crowdfunding page.