Thrifty mother-of-two creates ‘Catio’ for her felines using Aldi and IKEA bargains (and it cost less than £100!)

A thrifty mother has revealed how she created a ‘Catio’ for her four beloved pets using Aldi and IKEA bargains.

Clare Bryson, 35 from Perth, Scotland, wanted to create a safe area for her felines to play in after one of her kittens was sadly run over.

Running along the side of her house, the single mother-of-two has a pathway where she used to store her bins.

Pictured: Clare’s completed ‘Catio’. The savvy mother turned an old drinks cabinet from a local pub into a play area for her felines and laid down Astroturf

But after seeing neighbours turning this space into a sheds and home bars, she decided to create an enclosed ‘Catio’ for her pets to play in.

To begin with, Clare turned to her friend – who works as a joiner – for help creating the roof extending over the narrow walkway.

Once this was completed, she said: ‘I painted, decorated and created play areas for the cats myself, all for under £100 – just by being creative with leftover materials and recycling items where I could.’

As the new slanted roof blocked out most sunlight, Clare settled on a ‘midnight’ theme for the play area. 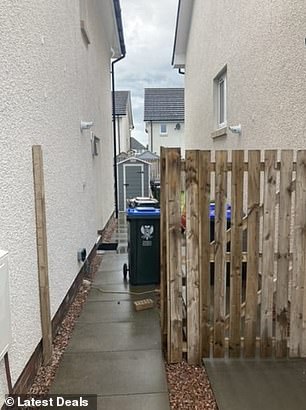 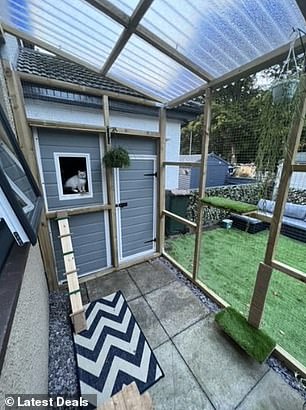 Left: What the area outside Clare’s home looked like before. Right: The ‘Catio’ during the building process 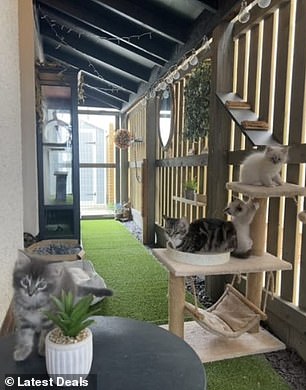 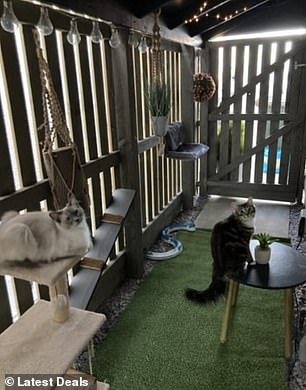 Left: Clare’s four cats enjoying their enclosed play area. Right: The mother strung up £10 Aldi fairylights and finished off with some hanging plants

After covering the ceiling in the £30 Farrow and Ball shade Railings, the thrifty woman then strung some £10 Aldi fairylights around the beams.

She continued: ‘My friend had some left-over Astroturf I used for the path, and I bought plum slate chippings for the edges from B&M. I used two bags for a total of £8.’

As the ‘Catio’ extended along her garden wall, she opted to use the same grey paint for the fencing too.

What’s more, she also upcycled an old drinks cabinet from a pub that had closed down and placed more toys in it for her cats to play with. 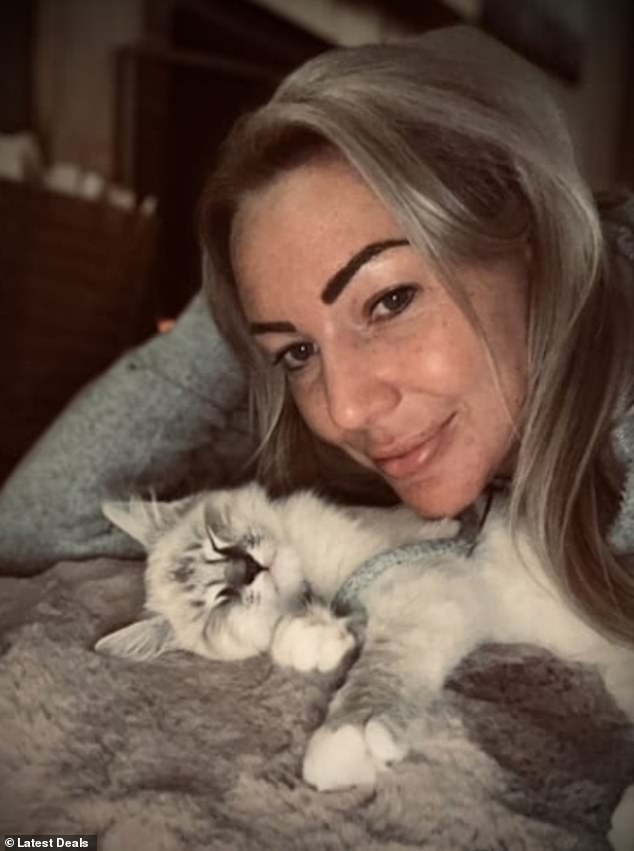 Clare pictured with one of her cats. The single mother-of-two spent £100 transforming the outdoor space into a safe area for them 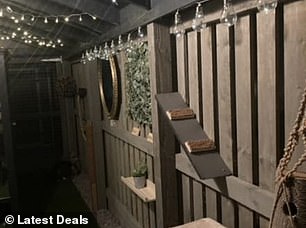 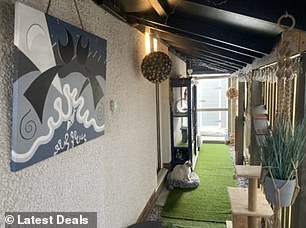 Left: The ‘Catio’ has ramps on the walls for the cats to play on. Right: The space also has a cat tree and several beds

Clare continued: ‘I created ramps from bits of old kitchen kickboard I had left over, cut up bits of wood from my son’s old bunk bed slats and glued on jute rope to make steps and scratching poles. The jute rope was just £10 from Amazon.’

Along with some of her old artwork, the mother hung  up a mirror she had found for free, added some fake £5 ivy from IKEA around the fence and finished off with some hanging plants for extra decoration.

Following on from her successful project, Clare says she’s even helped her joiner friend create another ‘Catio’ for a client.

‘Now that I know Catios are a thing I’ve looked at quite a few, and there are so many great ideas, it’s become very popular,’ she added.

DIY savvy couple transform their dated Georgian-style property for £55,000 in their spare time – and add £352,000 to the value

Couple DOUBLE the value of their £175,000 Welsh cottage with a stunning £50,000 renovation that transformed it from an ‘uninhabitable shell’ to a charming family home