A teary pensioner has made a heartbreaking Instagram appeal for the return of her stolen purse.

Pauline Walker, 86, was out shopping in Coalville, Leicestershire, last Saturday when she realised it had gone.

While there was only £10 in cash inside, the purse itself had high sentimental value and also contained her medication.

Her husband Geoffrey, 89, who gained an impressive Instagram following after posting pictures and videos of his beloved wife, uploaded a clip urging anyone who knows anything to come forward.

Mr Walker, who regularly wrote love letters to his wife while he was posted in Asia on National Service as a young man, said she was ‘very upset’ by the ordeal.

As he addresses his followers, Mrs Walker can be seen in tears next to him.

But after the clip was viewed hundreds of thousands of times online, the pair were invited on This Morning and won £1,000 to buy her a new purse.

Pauline Walker, 86, (pictured in an Instagram video with her husband Geoffrey) was out shopping in Coalville, Leicestershire, last Saturday when she realised it had gone 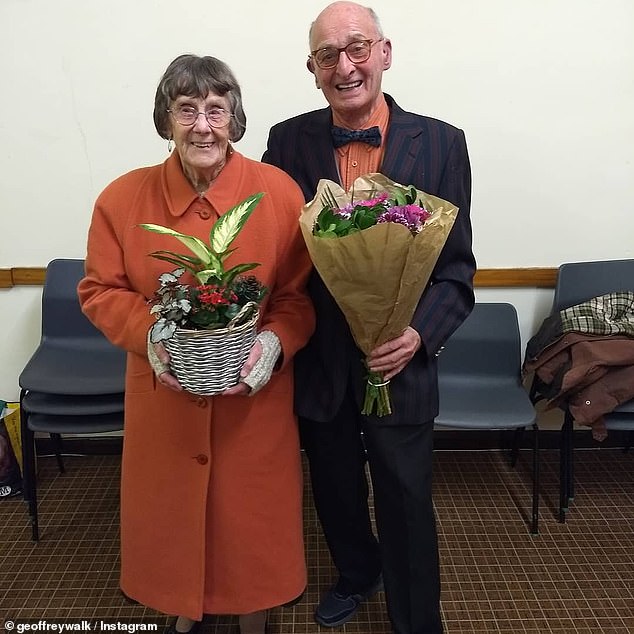 In love: Geoffrey Walker started posting pictures and videos of his wife Pauline and accumulated thousands of followers

In the video, Mr Walker explains: ‘Someone has stolen Pauline’s purse while she has been shopping in town.

‘Now, no doubt the thieves tried to use a card, but the bank stopped all the transactions.’

He adds: ‘Now she is very upset. If you find a purse, because they will throw a purse down, they won’t keep a purse.’ She chips in: ‘It’s black.’

Mr Walker continues: ‘It’s got phone numbers in of the children and everything. The money will be gone, but she’d like the purse back. Love to everybody.’ His wife then adds: ‘Thank you.’

The couple – who have been wed 68 years – of Thringstone, Leicestershire now have 123,000 followers following their appeal and were invited on the ITV show today to speak to hosts Holly Willoughby and Phillip Schofield about what happened.

Mrs Walker said of the reaction to the appeal: ‘I was really surprised. I couldn’t believe what good friends we have.

‘I was offered so many purses. I’ve also had a bouquet of flowers.’ 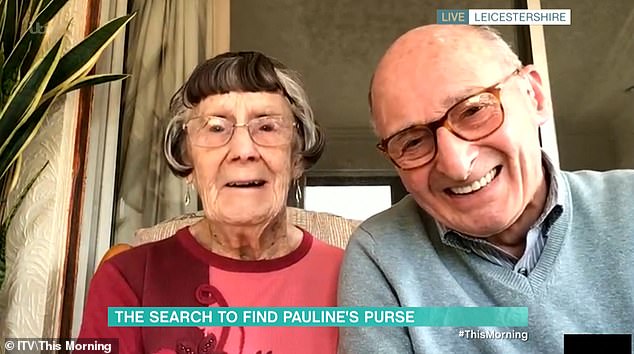 Pauline is pictured with husband Geoffrey, 89, on This Morning today, after their video about the stolen purse got hundreds of thousands of views on Instagram

Asked whether they had got the purse back, her husband replied: ‘We’ve moved on from that now.

‘We don’t dwell on negative things too long. We like to present a happy face.’

They apologised for not being able to respond to the thousands of messages they have received online before they were asked to play ‘spin to win’.

The couple were gobsmacked when the wheel landed on £1,000, which the presenters said could buy Mrs Walker a new purse.

One of Mrs Walker’s cards was used to buy something in Greggs, but the bank has reimbursed her.

She said of the incident: ‘I was in the chemist and I bought things in there on my card, and after I paid I put my purse back in my trolley, and then I went to have a little look in a couple of shops.

‘I then wanted to get something to eat, so I went into a cafe and ordered a cup of tea and a piece of apple shortbread.’ 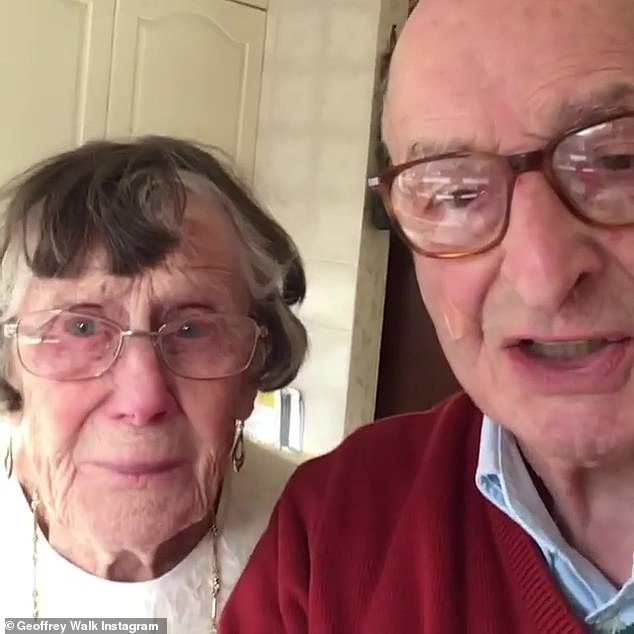 Her husband Geoffrey, 89, who gained an impressive Instagram following after posting pictures and videos of his beloved wife, uploaded a clip urging anyone who knows anything to come forward

She added: ‘The tea was taking a while, so I left my trolley and went to ask at the counter if they’d forgotten it, but they just said they were busy and it would be coming soon, so I sat back down.’

‘In the cafe was the only time I left it alone, so it must have been taken then.’

She continued: ‘The bank had phoned my husband even before I got home to tell him.

‘I feel sorry for the person – they must have been hungry because they went straight to Gregg’s to use it.’

She added: ‘There wasn’t much money in it, only a tenner, but I am a sentimental person about these things.’ When you are 86, you don’t get over things like this.’

Their granddaughter was one of over 3,000 to comment on the videos.

She wrote: ‘Please someone give her purse back. God bless your heart Grandma and Grandpa.’

In a second video posted the next day, which has had 142,000 views so far, Mrs Walker says: ‘Good morning everybody. I’d like to thank you all for the messages about me losing my purse. 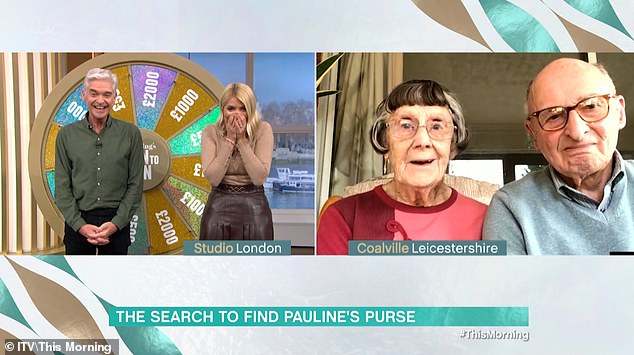 On the ITV show, The Walkers (right) apologised for not being able to respond to the thousands of messages they have received online before they were asked to play ‘spin to win’ by hosts Holly and Phillip

‘I’m feeling a lot better this morning But I’m still very cross with the people who stole it. Thank you very much, love you all. Thank you, goodbye.’

In a third clip, the couple continue the appeal, but get distracted by discussing the snow outside their window and having a cup of tea.

Gerald Fraser replied: ‘That’s terrible for Pauline, what a horrible thing to happen to such a lovely person.’

Danielle Riojas commented: ‘Oh Pauline! Please know I’ll be praying for the Lord to comfort you! I was robbed once traveling in Barcelona, and it shook me so. I recall that feeling and I know just how to pray.’

Army veteran Mr Walker – who served with the Royal Leicestershire Regiment – has written a book called Parted by Conflict.

He was posted abroad to the Far East and wrote about the love letters he and Pauline shared.