Thug, 19, who boasted on Snapchat about stabbing a man to death is jailed

A teenage boy who shared a snapchat video in which he boasted about stabbing a father-of-one with a dagger has been found guilty of murder.

Enroy Ruddock, 19, from Coventry, stabbed Emmanuel Lukenga, 21, known as Manny, as he tried to escape his attackers by climbing a garden fence in Coventry on June 12 last year.

Mr Ruddock, also from Coventry, bled to death after suffering ‘a gaping wound’ which punctured the main vein carrying blood back to his heart.

Today Ruddock, who was accused of being the knifeman, was found guilty of murder at Warwick Crown Court. 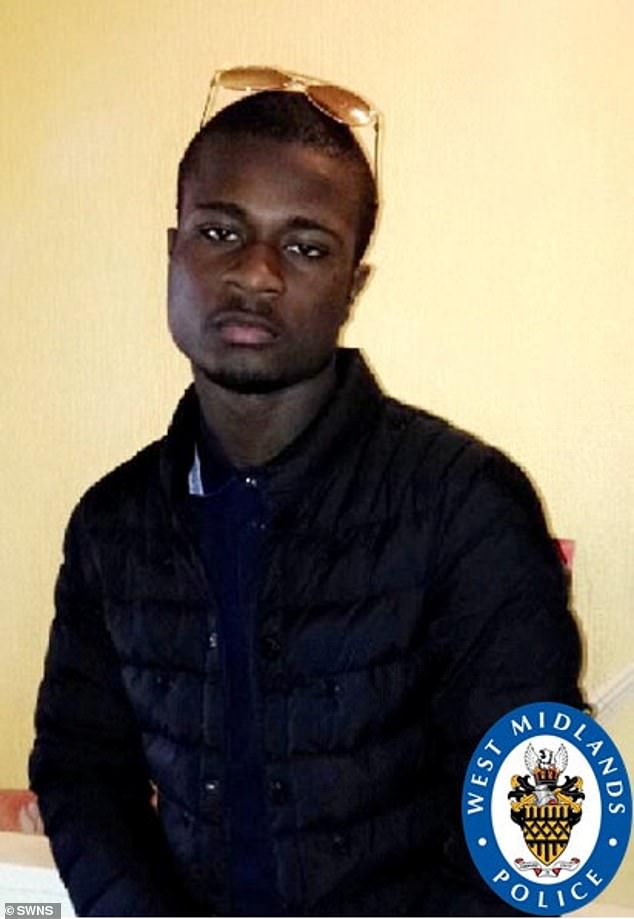 The teenager stabbed Emmanuel Lukenga (pictured), 21, known as Manny, as he tried to escape his attackers on June 12 last year 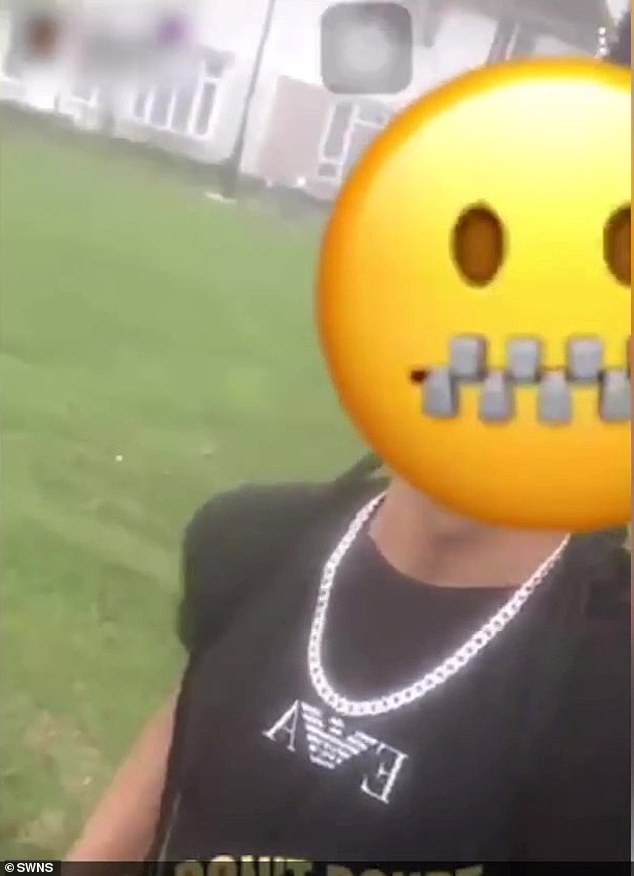 A court heard there had been a feud between two groups of youths, one from the Canley area of Coventry and the other from Tile Hill, in the city.

Co-defendant Kyle Kinchen, 19 was found not guilty of murder while Rilee Madden, 19 was convicted of handling stolen goods.

The court heard the defendants set fire to Mr Lukenga’s red Astra after tracking down his vehicle on a stolen motorbike and a Berlingo armed with petrol cans.

Minutes later they spotted two of Mr Lukenga’s friends, who ran into a local convenience store in the area.

CCTV from the shop showed Richardson – the passenger in the Berlingo – carrying a large axe and Ruddock holding something behind his back.

Unable to attack the two in the shop, they returned to their vehicles and drove off.

The van and the bike caught up with Mr Lukenga and his friends again as they tried to escape down an alleyway between Tile Hill Lane and Gravel Hill. 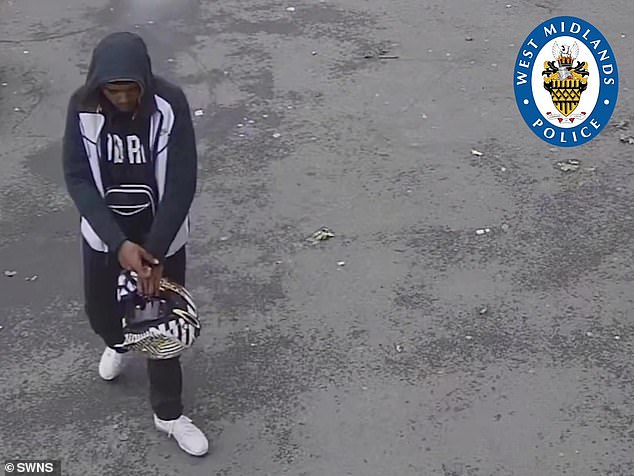 Ruddock (pictured hours before the murder) was a member of the Canley gang who went out looking for members of the rival gang, which included Mr Lukenga 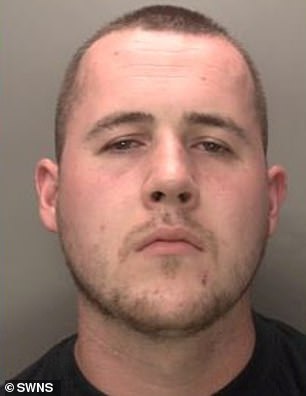 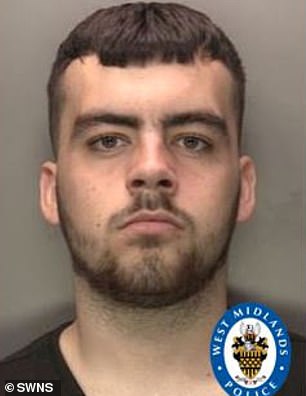 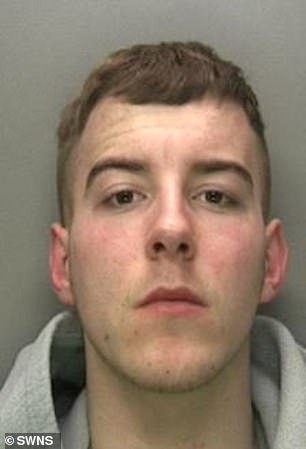 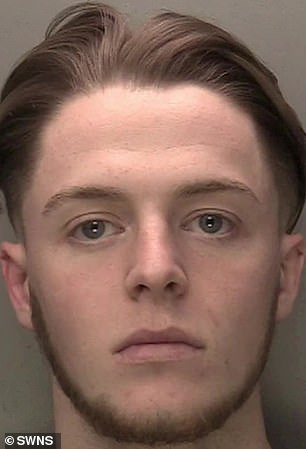 Kyle Kinchen (left), 19 was found not guilty of murder and Rilee Madden (right), 19 was convicted of handling stolen goods

The Berlingo was seen driving down the alleyway, damaging the van and coming to a stop where passengers Ruddock and Richardson gave chase on foot.

Mr Lukenga and his friends fled into gardens, as terrified residents looked on in horror.

Richardson axed down a gate and seconds later Ruddock caught up with Mr Lukenga in Franklin Grove as he tried to climb a fence and stabbed him just once.

The wound severed a vital artery and, although police and ambulance colleagues tried desperately to save him, he died at the scene.

Later the same day a Snapchat video was shared online by Ruddock, with his face covered by an emoji, bragging how he had stabbed Mr Lukenga after his friends had left him.

Officers gathered CCTV from the area and tracked the groups back to hours earlier in the day to identify all those involved.

Detective Chief Inspector Scott Griffiths, from West Midlands Police, said: ‘Ruddock was wearing a motorcycle helmet ahead of Manny’s murder so we tracked back to earlier in the day where he had met Kinchen, who had given him the helmet. 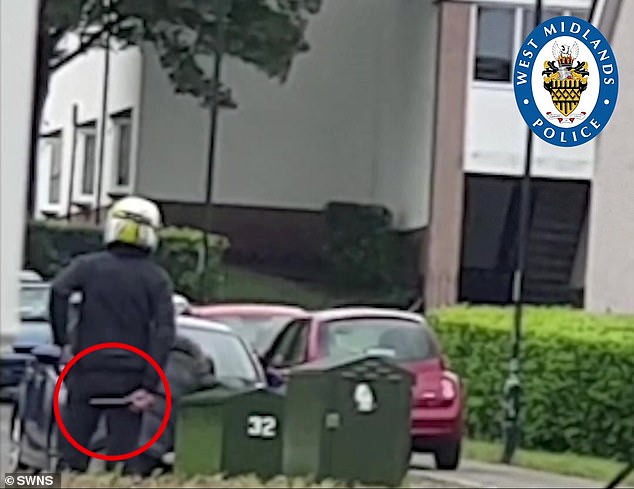 Ruddock, who was found guilty of murder, was seen holding the knife moments before the murder 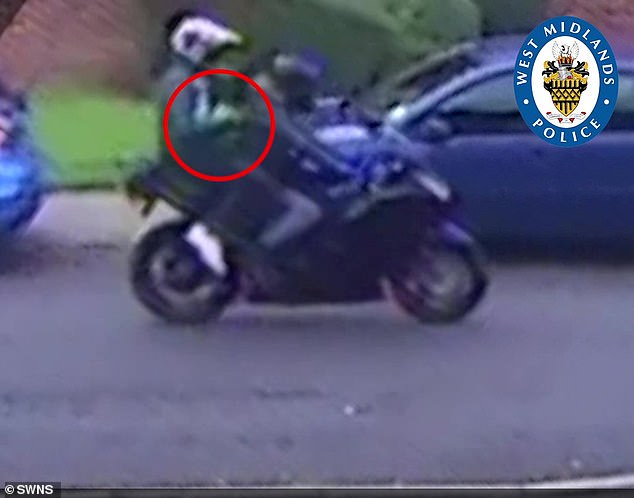 ‘Using witness statements we were able to piece all their movements together both before and after the attack.

‘Although they had tried to cover their tracks we found the bike, a petrol canister used to torch the Astra and clothing – all had been burned.

‘Significantly we found a large Rambo knife discarded in a brook which matched the damage caused to Manny’s clothing.

‘It was clear from the outset that the three convicted were intent on causing serious harm to Manny and his friends that day.’

Ruddock, Richardson, Brankin and Kinchen all pleaded guilty to arson but were convicted of their additional charges following a trial.

DCI Griffiths added: ‘Our thoughts are with Manny’s family as, once again, we see the desperate sadness that knife crime brings, not just to the victim’s family, but those affected by the perpetrator’s actions.

‘We have worked tirelessly to educate young people about the consequences of carrying knives and the impact on young lives.

‘We are also working with our communities in Coventry to understand the tensions that sit behind the violence that flares up, seemingly out of trivial disputes.’