Thug, 20, who attacked traffic warden is jailed for nine months

Danyal Bashir, 20, (pictured outside court) has been sentenced to nine months in a young offender institute

A thug who pushed a traffic warden in the road before stamping on his head in a ‘ferocious and extreme’ sustained attack has been detained for nine months.

Danyal Bashir pulled 21-year-old Charlie Weston off his moped after he put a ticket on an illegally parked car in Alum Rock, Birmingham.

Mr Weston was repeatedly punched, stamped on and kicked in the throat while Bashir, 20, tried to remove his helmet.

The gang was filmed by onlookers who ‘voyeuristically’ posted the sickening footage on social media, leaving Mr Weston to feel viewers were ‘glorifying in his misery’.

After leaving Mr Weston lying in the road and threatening to run him over, the yobs stole his moped before dumping it in a nearby street.

Today Bashir, who was 19 at the time, was sentenced to nine months in a young offender institute after previously admitting assault occasioning actual bodily harm.

Sentencing him at Birmingham Crown Court, Judge Kristina Montgomery QC said the footage showed the ferocity of the sustained attack. 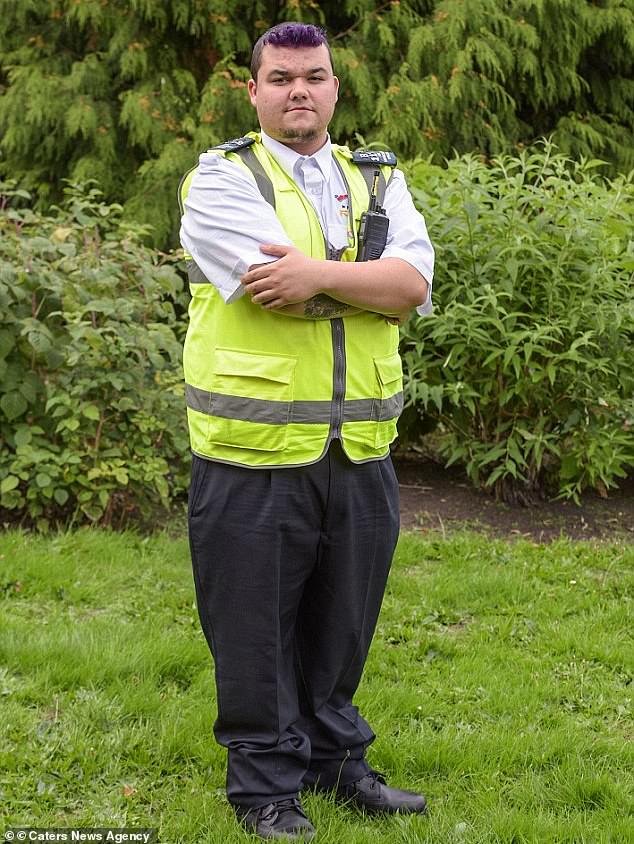 Mr Weston, from Wolverhampton, was set upon on September 14 just ten minutes after he started checking vehicles in the street.

Shocking footage of the attack posted on social media went viral, leading to police launching a major manhunt for the attackers and identifying Bashir.

Prosecutor Gary Cook said: ‘Six males approached Mr Weston, they surrounded him and asked him whether he liked shouting at a woman.

‘He was then punched to the side of the head and someone kicked his bike and he fell over into the road.

‘Whilst on the ground he was kicked and stamped on repeatedly. He recalls his head being impacted a number of times. It seemed to him to last an eternity and then it stopped.’

The judge said Mr Weston’s motorcycle ‘was taken from him to humiliate him’ and he now suffers sleepless nights, anxiety and ‘hates his job.’ 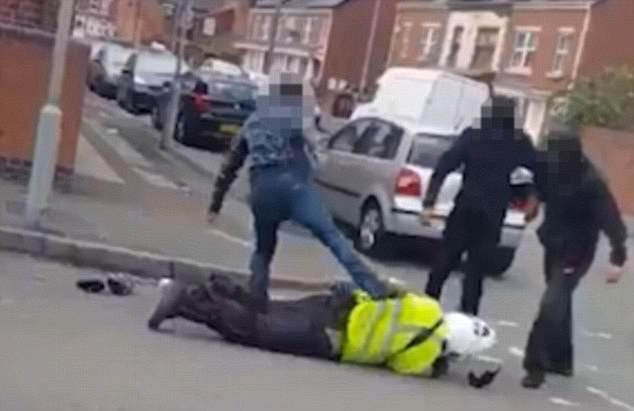 Shocking footage of the attack posted on social media went viral, leaving Mr Weston to feel viewers were ‘glorifying in his misery’

She added: ‘What you did that day was for nothing more than your own personal self-gratification, it was completely unacceptable.

‘This was an attack on public servant going about his duty. When they are met with violence that is an aberration in society.

‘Firstly you used your shod foot as a weapon. You were playing a leading role in a group attack.’

After the attack, the former security guard spent four hours in hospital where he was treated for bruising to his hands and head and a split lip.

Despite his injuries, he was back at work the next day.

Bashir, who has a previous conviction for assault, admitted assault occasioning actual bodily harm at a previous hearing.

He was ordered to spend nine months in a young offenders’ institution.