Thug, 23, laughs outside court after she admits battering student, 19, with a baton in brutal attack

Thug, 23, laughs outside court after she admits battering a student, 19, with a baton in a brutal attack

A woman who battered a student with a baton laughed as she left court today after admitting the brutal attack.

Stephanie McIntyre, 23, launched the vicious assault on Caitlin Shepherd, 19, after a random meeting in Strathclyde Country Park in Motherwell, Lanarkshire.

Miss Shepherd, of Glasgow, and two friends had arrived at the park for a meet up of cars when she spotted a driving close to her.

She pulled in but McIntyre and her co-accused Amanda Watt, 19, got out and confronted her.

Watt was shouting and swearing at Miss Shepherd telling her to ‘get out the f*****g car’ before McIntyre produced a baton and unleashed a volley of blows to her face and head while trying to pull her out the vehicle.

Miss Shepherd later posted shocking images of her injuries on Facebook and an appeal to track down her attackers went viral which led to both women being arrested and charged.

McIntyre gave a no comment interview while Watt revealed everything that had happened and told police the baton was in her house. 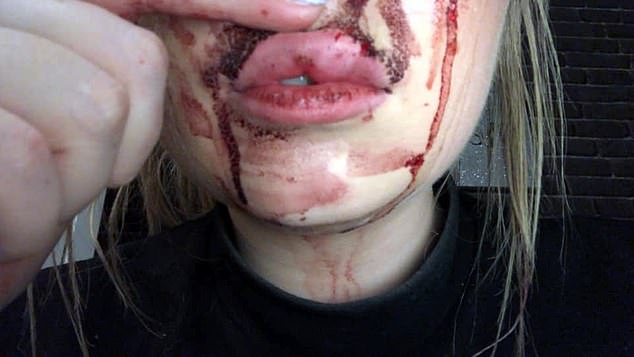 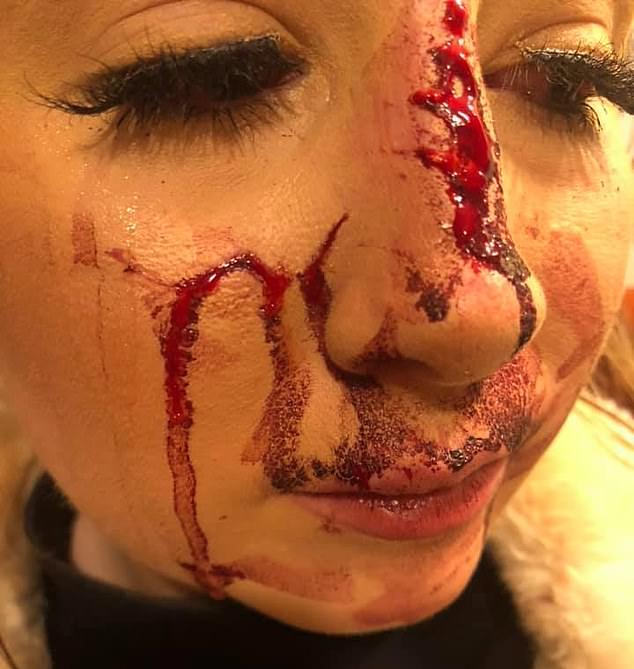 McIntyre, of Motherwell, has admitted assaulting Miss Shepherd while Watt admitted acting in a threatening and abusive manner in March this year after both appeared at Hamilton Sheriff Court.

Depute fiscal Scott King said: ‘The witnesses were in Strathclyde Park taking part in a car meet which regularly takes place there.

‘Miss Shepherd and her friends arrived at 8.40pm and there were a number of cars around.

‘They were looking to see if they knew anyone and drove round the car park and noticed a car driven by the accused Miss Watt behind her.

‘She thought she wanted past her because it was driving close to her and pulled in but Miss Watt stopped her car and the complainer could hear shouting coming from her car. 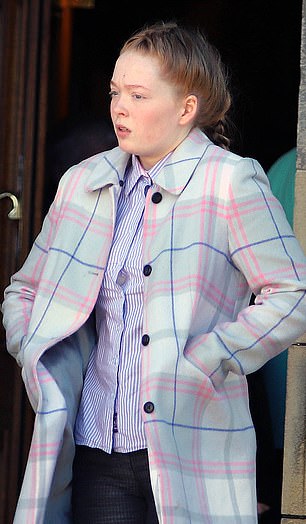 ‘She had rolled down the window and was shouting towards the vehicle and then Miss Watt got out of her car and approached the complainer’s car.

‘Her door was open as she approached and Miss Watt was shouting at her to get out the f*****g car.

‘The complainer told her she wouldn’t do so and during the altercation the accused Miss McIntyre got out armed with an extendable baton.

‘She approached and began striking Miss Shepherd to the face with the baton who could feel the blows to her head which made her feel dizzy and lightheaded and she began to bleed heavily while sitting in the car.

‘Watt saw the extent of the bleeding and pulled Miss McIntyre away from the car shouting ‘s**t s**t come on’ while the accused McIntyre also seized the complainer’s legs in an attempt to pull her from the vehicle and eventually they ran back to their car.’

Miss Shepherd contacted police and was treated for her injuries in hospital before posting photos of her horrific injuries online.

Mr King added: ‘The accused and the complainer were unknown to each other and as a consequence there were moves made to trace them.

‘The incident had attracted some attention on social media due to the injuries and these were posted which ultimately, through social media, led to both accused being traced and identified.

‘During interview Miss Watt provided details of what had happened and of Miss McIntyre’s involvement in the assault and that the baton was in her home while Miss McIntyre gave a no comment interview.’

Sheriff Thomas Millar deferred sentence on the pair until next month for reports and continued bail.

Speaking after the incident, Miss Shepherd said: ‘I have no idea what led to these girls becoming so angry because there was no incident beforehand and I don’t know them.

‘But they lost the plot and I didn’t know when they were going to stop. If they had got me out of the car, I don’t know what would have happened.’