A man has been banned from owning or having contact with animals after he was filmed punching and kicking a dog in a pub garden.

Daniel McCreedy, 33, dragged the Staffordshire Bull Terrier across the ground by his collar, and poured some of his pint of beer over the dog.

Much of the abuse took place within full view of another man.

He pleaded guilty on August 11 to causing unnecessary suffering to the dog, called Babe, by subjecting it to unreasonable physical violence at the Royal Oak pub in Lewes on April 13.

The animal abuser was handed a 12-month community order, 20 days of rehabilitation for mental health issues and ordered to comply by an eight-week curfew 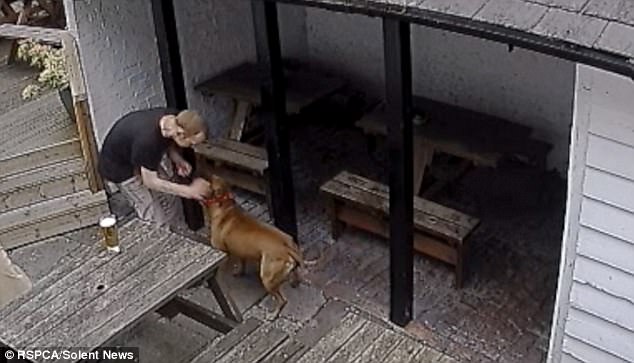 Daniel McCreedy, 33, dragged the Staffordshire Bull Terrier across the floor by his collar, and poured some of his pint of beer over the dog

Brighton Magistrates’ Court heard on Friday that McCreedy was looking after the dog, also known as Tyson, for a friend when he was captured in ‘disturbing’ CCTV footage at the pub.

In a 20-minute video, McCreedy was seen punching and kicking the dog, dragging him across the floor by his collar and pouring some of his pint over the animal.

David Buck, prosecuting, said: ‘During the footage, one can see a number of incidents of aggression on behalf of the defendant towards the animal.

‘You can see the defendant striking a blow to the head of the dog soon after entering the garden.’

McCreedy subjected the dog to nine further blows to the head while it was under the table, as well as kicks to the groin area. 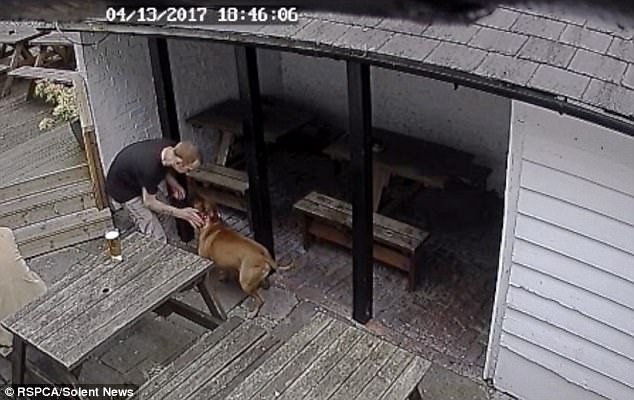 Mr Buck said: ‘At no stage during the incident does the dog appear aggressive.

‘The defendant’s actions caused fear and pain to the animal.’

McCreedy was in the pub for 40 minutes before being asked to leave.

After the incident, pub staff watched the footage back, and then posted a short segment online in a bid to identify the man, and reported it to the police and RSPCA. 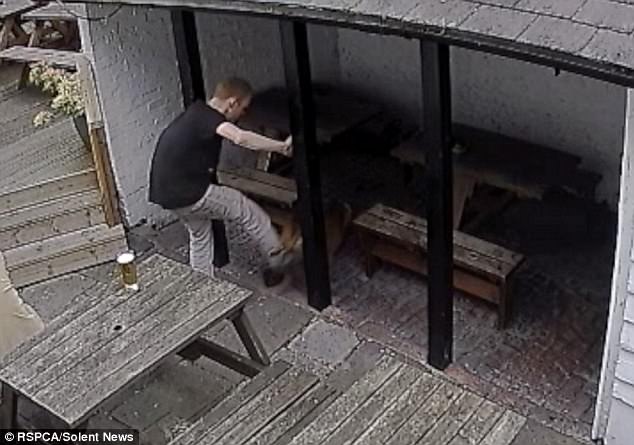 When the owner was traced, the dog was examined by the RSPCA and a vet, and was found not to have significant injuries as a result of the abuse.

The dog now remains in the care of its owner, who was said to be ‘horrified’ to discover what had happened.

Martyn Williams, defending, said: ‘Mr McCreedy has asked me to express his genuine remorse and regret. He is genuinely appalled by his actions.’

He said McCreedy had mental health issues, including ADHD, tourette’s, OCD and stress.

Mr Williams added: ‘Looking after an animal causes him stress and is something he is totally incapable of doing,’

McCreedy has ‘constant involvement with social services’, and drug rehabilitation services Pavilions, he told the court.

Magistrate Michael Milne said: ‘The video is quite disturbing really. We have taken into account your early guilty plea, your remorse, and your mental health.’

McCreedy, of Brighton, was handed a 12-month community order, 20 days of rehabilitation for mental health issues, and an eight-week curfew from 8pm to 8am.

He was also made to £300 in costs to the RSPCA and an £85 court surcharge, and was banned from owning or having contact with animals until further notice.

McCreedy asked the judge, ‘if I am still allowed to feed the stray cats that come round every night’.

Mr Milne replied: ‘Did you not hear what I just said? You are not to have any contact whatsoever.’

‘This dog is completely subordinate and this prolonged period of abuse is totally unwarranted and frankly disturbing.

‘The poor dog is just absolutely terrified and also confused, one minute McCreedy is hitting him repeatedly in the head, the next minute he is cuddling the dog in a bid to pretend he is a caring animal owner.

‘It is just horrific to see and a vet who watched this said that in their opinion there is no doubt this dog was caused pain and suffering during this sustained attack.

‘It is perhaps lucky that the poor dog did not suffer any lasting physical injuries as a result of this attack, but he would clearly have been severely traumatised by McCreedy’s actions.

‘I would like to thank everyone who has helped to bring this case to court including the witnesses who gave statements and of course the landlady who provided us with the CCTV which quickly led to McCreedy’s identification.’