Thug, 39, hurled his French bulldog to the floor then repeatedly punched it

Thug, 39, hurled his French bulldog to the floor then repeatedly punched it in the head as shocked passers-by called the police

Dean Williams was seen throwing his French bulldog to the ground before punching it several times. He  was granted bail and will be sentenced later this month

A thug who threw his terrified dog to the floor before punching it could now face jail after horrified witnesses chased after him.

Dean Williams was seen throwing his French bulldog to the ground before punching it several times in a busy street.

Two students and an Uber driver witnessed the attack and chased after the 39-year-old builder and he was later arrested trying to drag the terrified dog from under a car.

A vet found the dog suffered minor injuries, including a small hemorrhage on its eye and a lesion above its eye.

The three-year-old dog has since been rehomed.

Cardiff University students Sarah Bill and Emily Johnson were returning home after a night out when they witnessed the attack.

Ms Johnson told the court: ‘I looked behind me and saw him pick it up above his head and throw her to the floor.

‘I thought that was a despicable act to do to an innocent animal. When we came down we saw Williams lying on the floor looking under the car with a French bulldog cowering underneath.

‘The dog was clearly in fear of this man. When the police arrived the dog came out.’

After chasing Williams, Ms Bill realised she was alone so ran back ‘hysterical’ and calling for someone to call the police.

Passing Uber Driver Chris Inchley told the court: ‘[Then] he picked the dog up above his head and threw it to the floor with force.’

Mr Inchley said the dog ‘yelped’, adding : ‘He was punching the dog to the head about four or five times. It was hard, it was very hard.’ 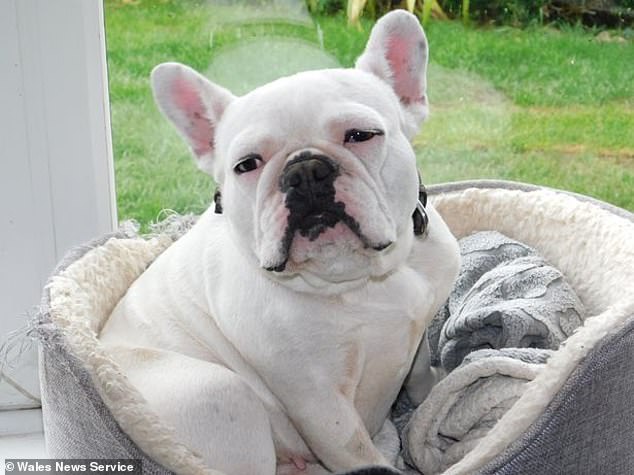 Williams’ three-year-old French Bulldog (pictured) suffered a small hemorrhage on its eye and a lesion above its eye. It has since been rehomed

Williams, from Pontprennau, Cardiff, denied abusing the dog, claiming it had jumped out of his hands.

Cardiff Magistrates’ Court yesterday heard how Williams was later found lying on the ground trying to entice the ‘cowering’ dog from underneath a car after it had ran off in the early hours of May 4.

Giving evidence, he said: ‘She jumped out of my hand and I tried to grab her because it was a busy road.

‘She jumped out and I picked her back up. I’m an animal lover myself, I have had her since she was a pup. She was a family pet.’

But magistrates found him guilty of causing unnecessary suffering to an animal.

Chair of the bench Martin Dennett said: ‘We can clearly see there are facial injuries. We felt it suffered abuse at the hands of Williams.

‘We are satisfied an attack took place and substantial in nature. We do not find your version of events credible in any way.’

Williams was granted bail and will be sentenced later this month.