An abuser who left his girlfriend with two black eyes after beating her twice in the space of six hours boasted on social media that he was ‘loving life’ as police prepared to arrest him.

Dale Burgess, 31, from Oldham, Lancashire, had slapped Caroline Ashwick up to ten times around the face before stamping on her, in an assault so savage she feared she would die.

Later that same day, February 10, he escorted her to an off licence near their home in Stockport before grabbing her by the throat, calling her a ‘wh***’ and choking her until she blacked out.

As Miss Ashwick was having photographs taken of her injuries by police the following day Burgess posted two messages on Facebook blaming her for the attack.

He wrote: ‘I can’t make everyone listen to me but it’s not all me remember that and she made me go like that b****.’

The assaults occurred after Burgess flew into a rage over texts he found on Miss Ashwick’s phone.

A second post read: ‘Say wot you want about me. She was taking drugs and drinking. I wanted better for her and I’m not like that so just f..k off.’ The third read: ‘Haha loving life.’ He was arrested a week later.

In a statement to police, Miss Ashwick who works for a software development firm said: ‘I was frightened and feared for my life. At one point I thought I might have died and I felt so dizzy and was scared and confused. 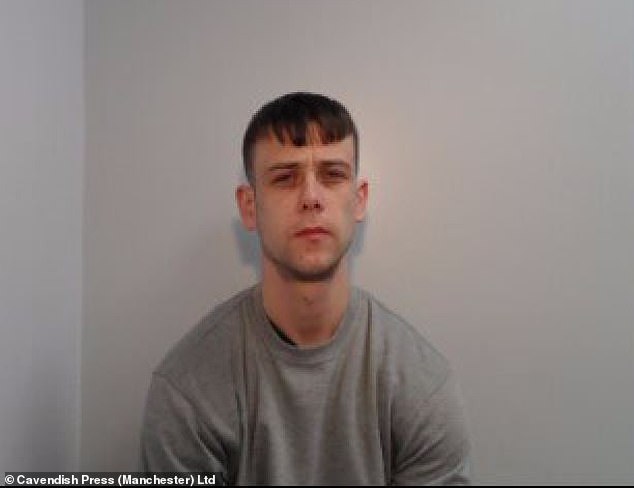 Dale Burgess, 31, a brute who left his girlfriend Caroline Ashwick with two black eyes after beating her up twice in six hours and has now been jailed for 18 months

‘During the time I spent with him I lost family, friends and nearly my job, and felt suicidal at times. He has destroyed my life.’

At Minshull Street Crown Court, Manchester, Burgess, of Oldham, was convicted of assault and was jailed for 18 months. The court heard the pair had been dating for a year and lived together in Stockport.

Prosecutor Philip Hall said: ‘The defendant got her inside the bathroom and read texts on her mobile phone. She was frightened and he then began a repeated assault on her, and she suffered numerous backhanded blows to her face.

He wrote: ‘I can’t make everyone listen to me but it’s not all me remember that and she made me go like that b****.’

‘Both her eyes were swollen, she was bruised and she fell to the floor. She was punched in her legs and the defendant repeatedly stamped on her with his knees. She received ten backhanded blows and punches.’

‘There were marks on her head, bruising and swelling on her eyes and over her arms and legs. Later that evening at around 6.30pm they took a short walk to an off-licence but she was too frightened to walk next to him and walked behind him instead. 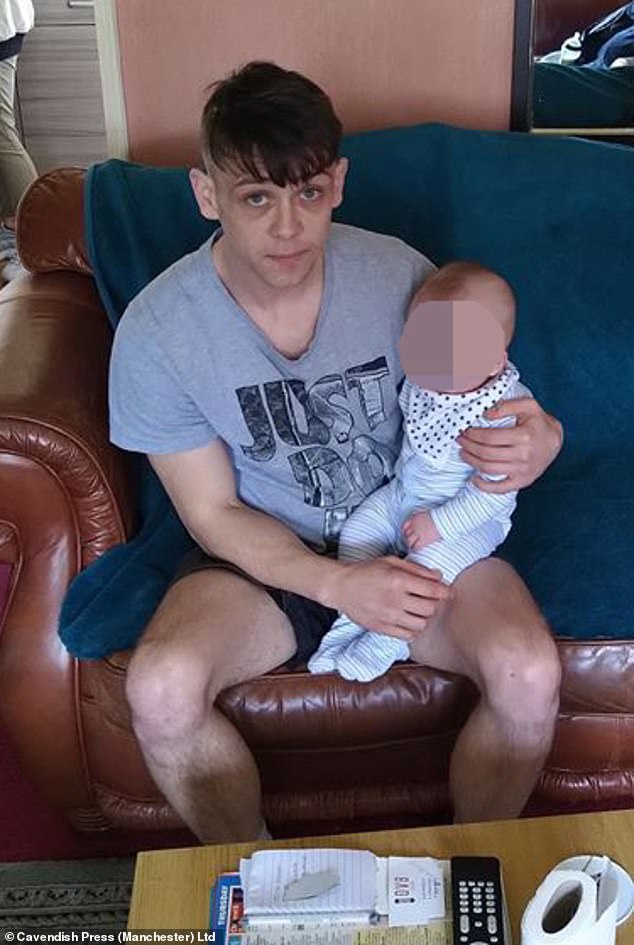 ‘The shop owner tried to calm the defendant down for about 45 minutes while he was being aggressive and threatening towards her. The defendant said he had a knife and the owner eventually backed away. He placed his arm around the victim and dragged her towards the door.

‘The defendant held her by the throat with great force. She blacked out and ended up urinating herself. CCTV shows him dragging her and her falling to the floor. She tried to struggle away from him but he had her arm around her neck for a second time and pulling her outside again.

‘A man stopped by the shop and tried to help her, at which point she had purple eyes and missing teeth. She eventually escaped him and sought refuge in a nearby restaurant. She was in immense pain, had bruises and swelling on her face, legs and arms and damage to her front tooth which is now missing.

‘The defendant was interviewed on 18 February and explained that he had been at his home address, he had been drinking and claimed she came at him and tried to hit him. He said he left his house and when he returned the victim said she was going to the shop for more alcohol. 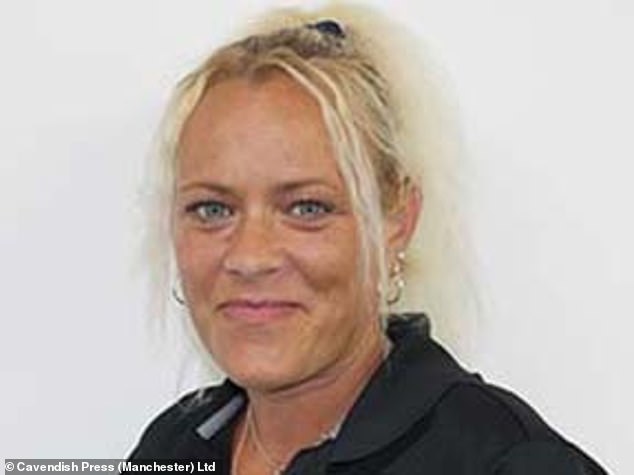 Miss Ashwick, who works at a software development firm said: ‘I was frightened and feared for my life. At one point I thought I might have died and I felt so dizzy.’

‘He claimed he followed her because he had been concerned about her welfare.. He denied causing any injuries and claimed they were caused by a drug dealer.’

Burgess had previously been jailed for five years in 2014 after being convicted of armed robbery. Defence barrister Vanessa Thompson said: ‘The relationship was unhealthy on both sides. There were issues of control and dependency and i was a toxic relationship.

‘The assault was violent and upsetting but the defendant does expresses remorse. At the time of the offence he was suffering from ADHD, borderline personality disorder, learning difficulties, anxiety and depression.

‘These courts see a lot of people who have been convicted of domestic violence and then come back having not learnt their lesson. He is not one of those people. He accepts he needs to deal with his relationships and conflicts better. He is not a man who wants to leave prison and stagger back into a toxic relationship with this complainant. He accepts the relationship is all over.’

Passing sentence, Judge Mark Savill told Burgess: ‘You were in a volatile relationship with her and on the day in question you were under the influence of drink or drugs and were behaving in a difficult and abusive way. You lost your temper completely and began what was a ferocious attack against her. You used both your hands and put your back hand to her face. I have seen the injuries and they are quite appalling. 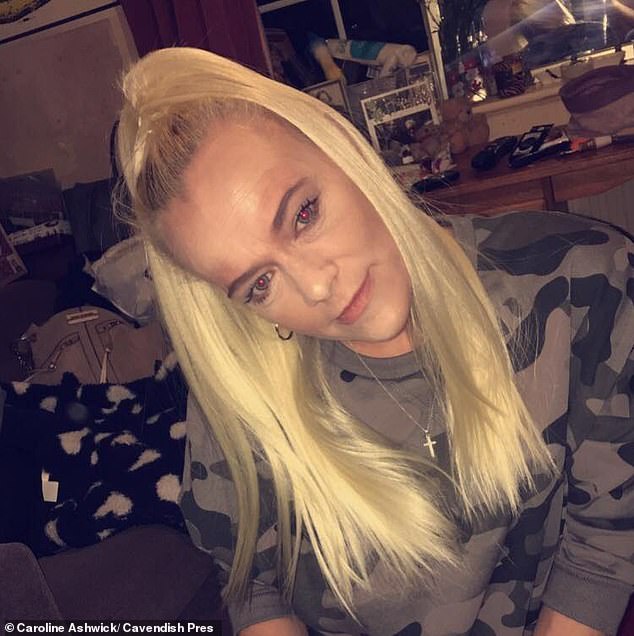 ‘She ended up on the floor and you punched her and stamped over her with your knees. She was terrified and thought she might die during the attack. You left her in a terrible situation. You then went to your local shop at about 6.30pm and got involved it what was a very, very ugly and violent incident.

‘You told the shopkeeper you had a knife. You assaulted your partner, dragged her towards the door and lifted her up by the feet. I regret to say she blacked out and urinated herself. You then dragged her by the body and dragged her out of the store door. A member of the public intervened shortly after. Her face was swollen and bruised and she had damage to her front tooth.

‘I am prepared to accept you have ADHD, borderline personality disorder and learning difficulties, as well as anxiety and depression. However, you lost your temper I note with concern that you pose a serious risk of harm to the victim. I am not sure there is a realistic prospect of rehabilitation and you do pose a risk of danger to the public. These were brutal attacks.’

Following the social media posts, Burgess was branded ‘vermin’ and ‘scumbag’ by the victim’s friends.

Danielle Wright said: ‘She gave her whole life up for u and you’ve done this to her.’ Stacey Moore said: ‘She made you do it? Nah mate you chose to do that to a vulnerable woman that did nothing but love you. Love the sound of karma coming.’