Thugs attack DPD lorry, threaten its driver and rip off its windscreen wiper

Two thugs launched a vicious attack on a parcel delivery lorry on a busy street in London.

In shocking footage the pair repeatedly kick the door to the vehicle’s cabin before ripping off one of its windscreen wipers.

At one point one of the men appears to briefly remove a heavy metal tool from the boot of his car – before placing it back inside.

The road rage incident occurred outside the Travelodge hotel on the corner of Grays Inn Road and St Chad’s Place in Kings Cross, London.

It is believed the DPD international parcel delivery lorry collided with the Silver Mercedes-Benz C-Class as they made their way towards Kings Cross train station.

One of the two men, who is seen wearing a grey tracksuit, climbs out of the car.

The other, wearing a black baseball cap and jacket, begins to take photos of an apparent dent in his vehicle. The lorry driver remains in the cabin of his vehicle.

However, soon tensions escalate. The pair, who have parked their car so as to block the lorry from moving, start to shout threats at its driver.

They hit the door to their cabin, which they have locked.

Then one of the two men appears to remove a tool, believed to be a crowbar, from the boot of his car.

Bystanders look on a one of the thugs prepares to rip a windscreen wiper from the DPD lorry’s cabin on Grays Inn Road, London 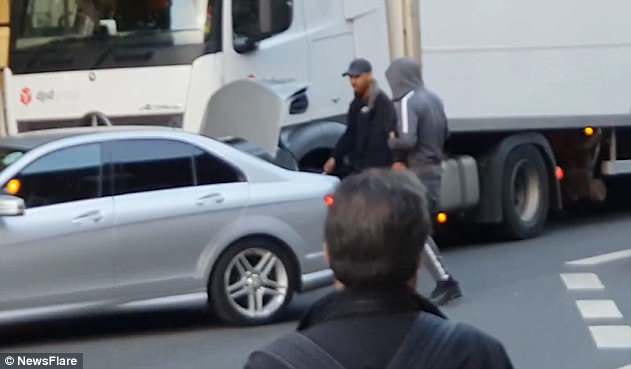 He brandishes it for a second then places it back inside. After, he removes a ragged cloth which he uses it to cover his rear number plate but fails to do the same for the front.

The car, first registered in 2012 according to the DVLA, has been taxed and recently received an MOT.

Once again they launch an attack on the lorry cabin, kicking at its doors in an attempt to reach the driver.

As a crowd gathers on the busy street, the pair decide to make an exit.

The two men then climb into their vehicle and drive away, taking a sharp left turn off the main road onto St Chad’s Place, passing a no entry sign.

Just before, however, one of the men reaches up and pulls the windscreen wiper away from the lorry before using his full body weight to rip it off.