This is the moment a group of thugs attacked each other with crutches and a ‘granny’ shopping trolley in a London brawl.

The three young men and one woman were filmed scrapping at Lewisham Market, on Lewisham High Street, on Thursday night.

The shocking clip was shared to social media – but some viewers seemed more disturbed about one brawler’s low-slung trousers.

The clip shows the youths gathered on the pavement as one man – wearing a white hoodie – viciously beats the others with his crutch.

A concerned onlooker swiftly moves away as the group continue to grapple.

Two young men attempt to take the makeshift weapon from the man in the white hoodie but he manages to back away from the group.

A young woman, wearing a blue hoodie, at first appears to try to pull the group apart before moving to the back. 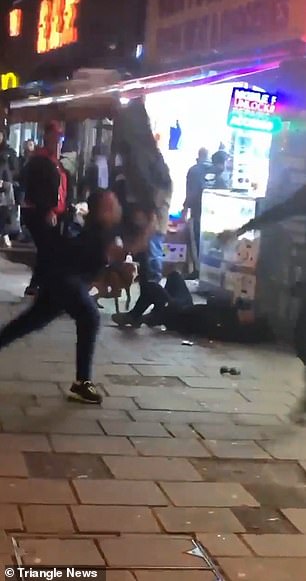 A youth – wearing a black jumper – swiftly lunges for the person with the crutch.

Another thug – whose trousers have fallen down revealing grey boxers – reaches his arm out, punching the thug in the black jumper in the face.

He falls to the ground with a toe-curling thud as the crowd gasps.

Police sirens can be heard in the background as the two other young men rush to pick up their belongings. 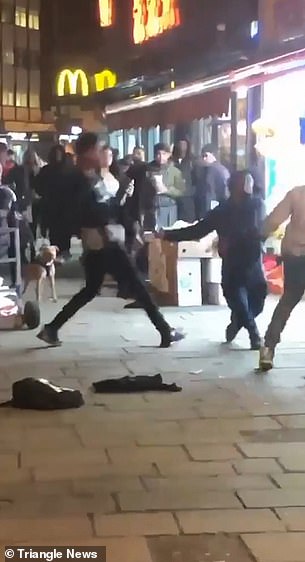 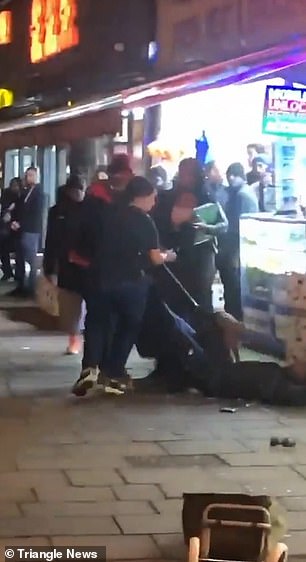 A youth – wearing a black jumper (left, centre) – swiftly lunges for the person with the crutch but is punched in the face. He falls to the floor and a group gathers around him

The young woman walks over to the man who fell, appearing to quickly check on him before before picking up a granny-style shopping trolley.

She lunges at the man whose trousers have almost completely fallen down.

The men who are still standing run into a nearby shop with the sirens still sounding as a crowd gathers around the man on the ground.

The video was shared on social media where viewers took to the comments to share their thoughts. 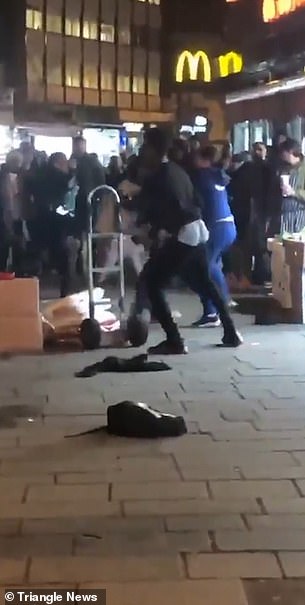 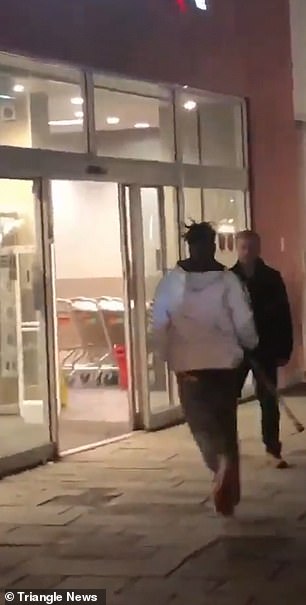 The group of three young and one woman were filmed fighting in Lewisham Market, on Lewisham High Street (left). As sirens are heard, two of the men swiftly escape through a shop. One can be seen holding onto a crutch

Steve Burke said: ‘The young chap could do with a belt to keep his trousers up.’

Another added: ‘The bigger question for the nation surely is what sort of society thinks going round with your a*** hanging out is an acceptable way to dress?

‘That’s far more disturbing than the fight itself.’

A police spokesperson said: ‘Police were called at 17:20hrs on Thursday, 23 January to reports of a group of males in Lewisham High Street.

‘Officers and the London Ambulance Service attended and found a male, aged in his late teens, suffering facial injuries.

‘He was treated at the scene for non life-threatening injuries. No arrests have been made.’