Flood alerts have been issued all over England as remnants of Hurricane Humberto arrive from across the Atlantic today which will see more than a month’s worth of rain fall in as little as six hours.

Widespread weather warnings have also been put in place up and down the UK as thunderstorms bring in the region of 2.7 inches of rain in some areas, leading to fears of mass flooding and chaos for motorists.

The downpour is being brought by a burst of low pressure travelling across the UK, along with warm and humid air linked to the remnants of Hurricane Humberto which hit the Bermuda coastline last week.

The Environment Agency has issued two flood warnings for south-west England and 27 flood alerts across the rest of the country.

Meanwhile the Met Office warned of strong gusts hitting coastal areas throughout the day, with those living in low-lying areas warned that flooding was likely.

Met Office forecaster Luke Miall said 48mm of rain has already fallen in parts of Hampshire over the past six hours, while mid-Dorset experienced 36.4mm.

A Jeep is pictured driving through the rainwater as the River Rea bursts its banks and a Corsa becomes stranded in water in Longbridge, Birmingham 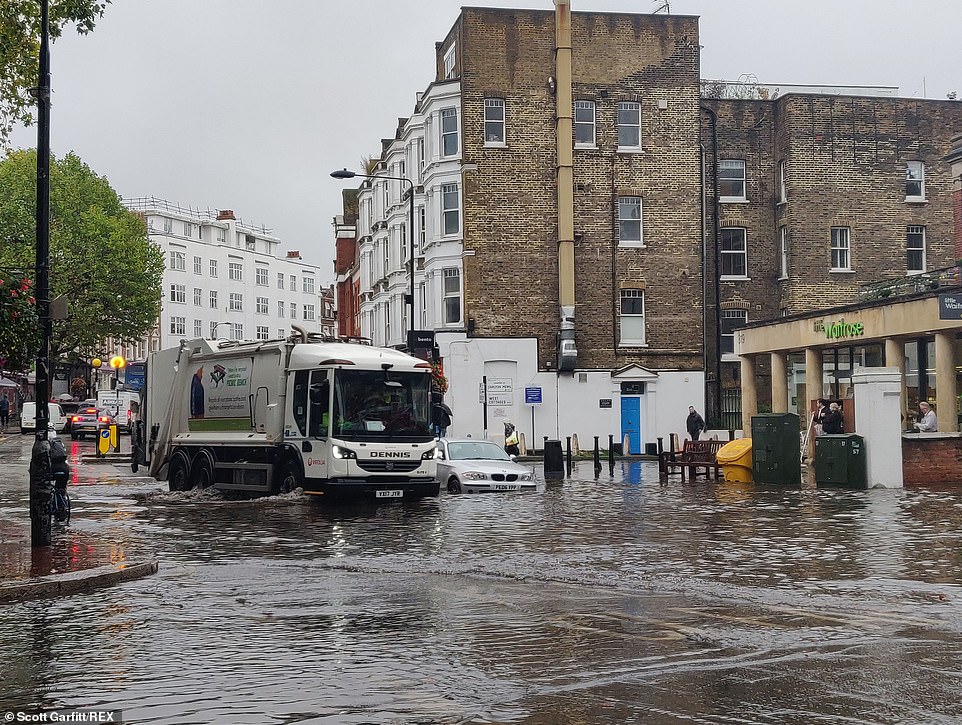 Roads have also flooded in West Hampstead, London, this morning (pictured) with a bin lorry struggling to drive through surface water 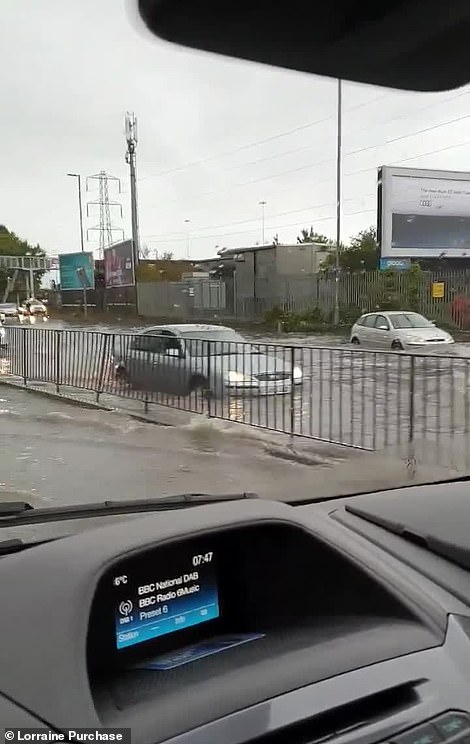 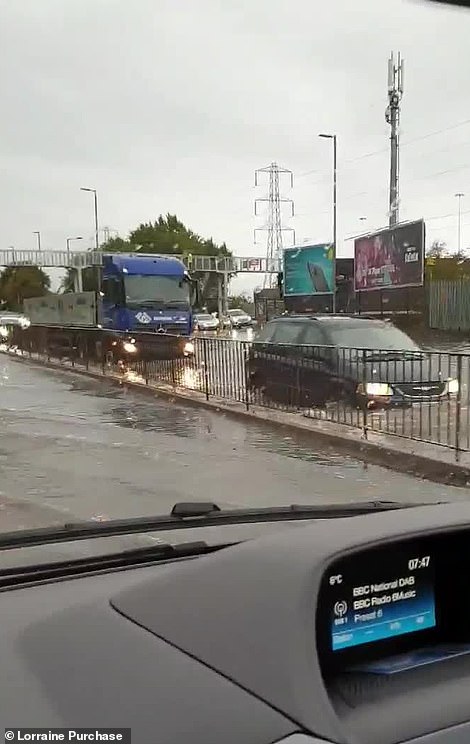 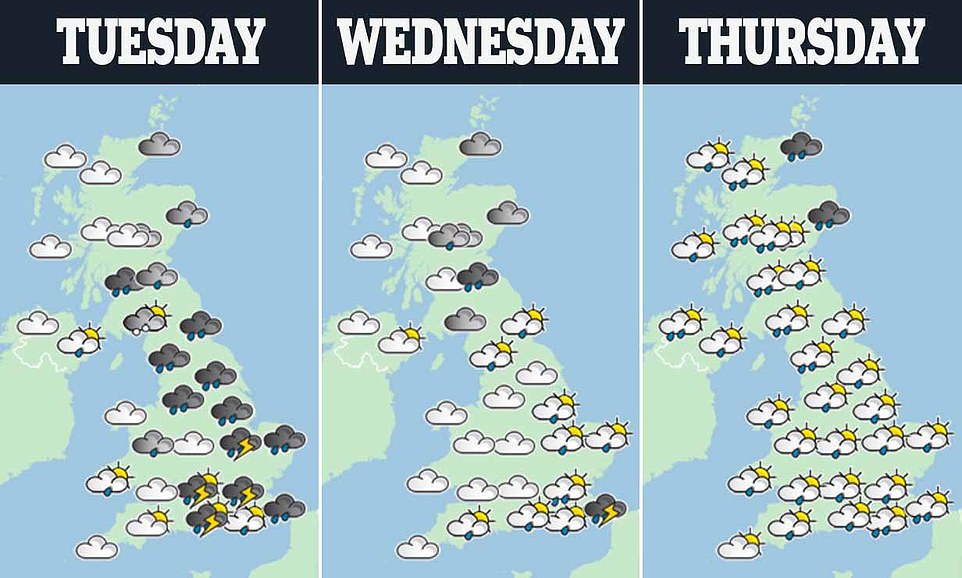 Today’s weather warning is set to last until 11pm and although the heavy rain is expected to clear by Wednesday, a low-pressure front is expected to remain for the rest of the week 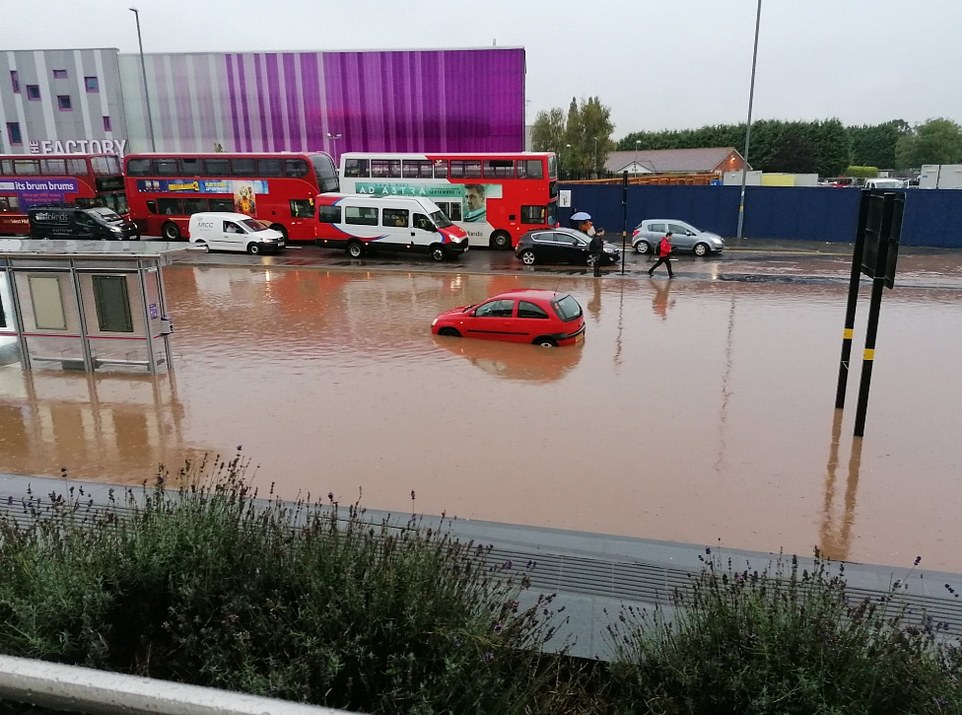 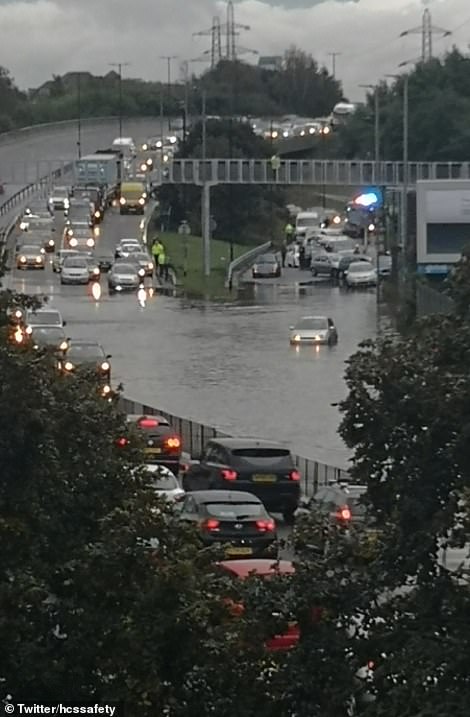 Commuters are shown running for shelter during a heavy downpour in London this morning (left), while flooding in Southampton caused chaos on the roads (right) 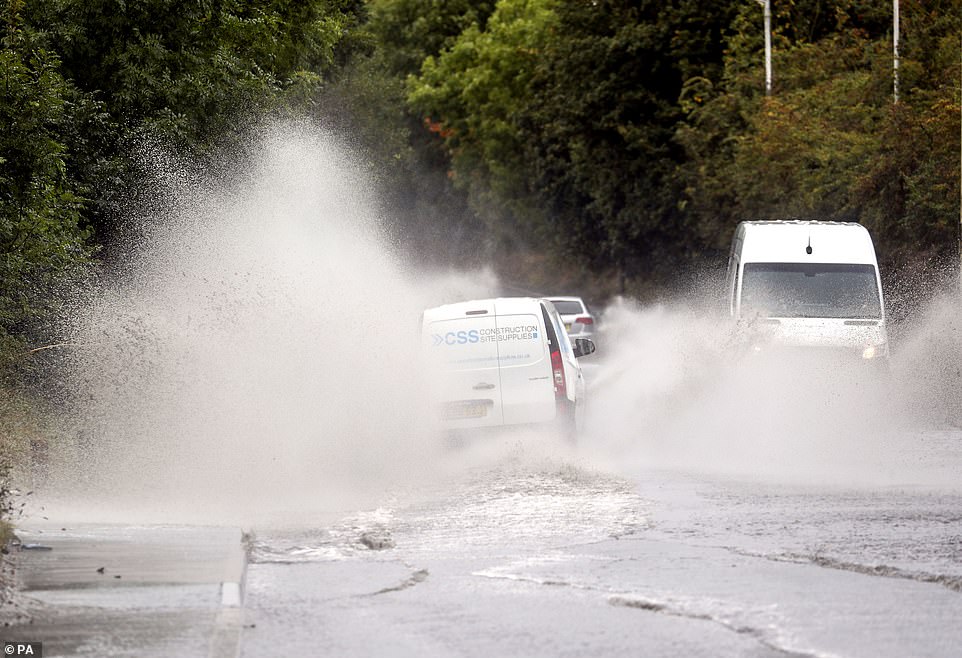 A van made a big splash after driving through puddles in Colnbrook, west London, (pictured) this morning

England and Wales can expect 30-50mm of rain today, with up to 70mm in isolated spots, the Met Office said.

‘There is likely to be disruption throughout central and southern England this morning,’ Mr Miall said.

‘I would expect quite a lot of surface water flooding on the roads. That will cause some disruption to people travelling, so you can expect journey times to be delayed.’

Mr Miall said an area stretching from Liverpool down to the south-east coast is at risk of seeing between 15mm and 30mm of rain fall within ‘a couple of hours’ this morning.

The Travel Dorset Twitter account, run by Dorset Council, said there has been reports of ‘deep flooding’ in parts of Dorchester this morning.

Meanwhile, the Environment Agency has two flood warnings in place for the River Frome between Maiden Newton and Dorchester, in Dorset, south west England.

It said flooding ‘is expected’ along the river between 8am and 6pm today.

A further 27 flood alerts, where flooding ‘is possible’, have been issued for rivers in the South East, East Midlands and North West of England. 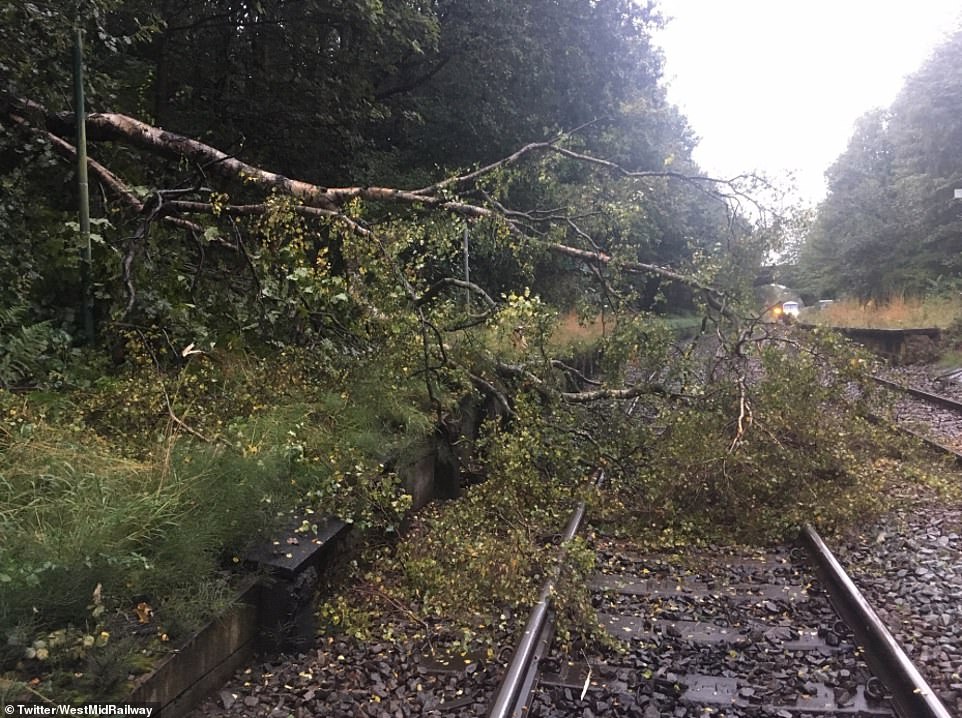 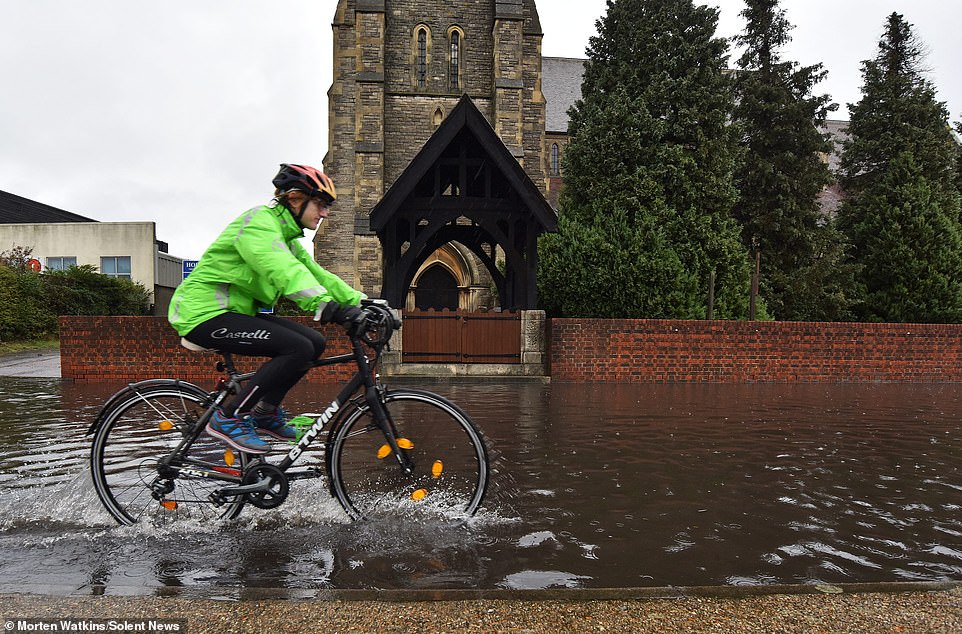 Cyclists were also left facing a struggle to get to work today as they peddled hard through floods in Southampton, pictured 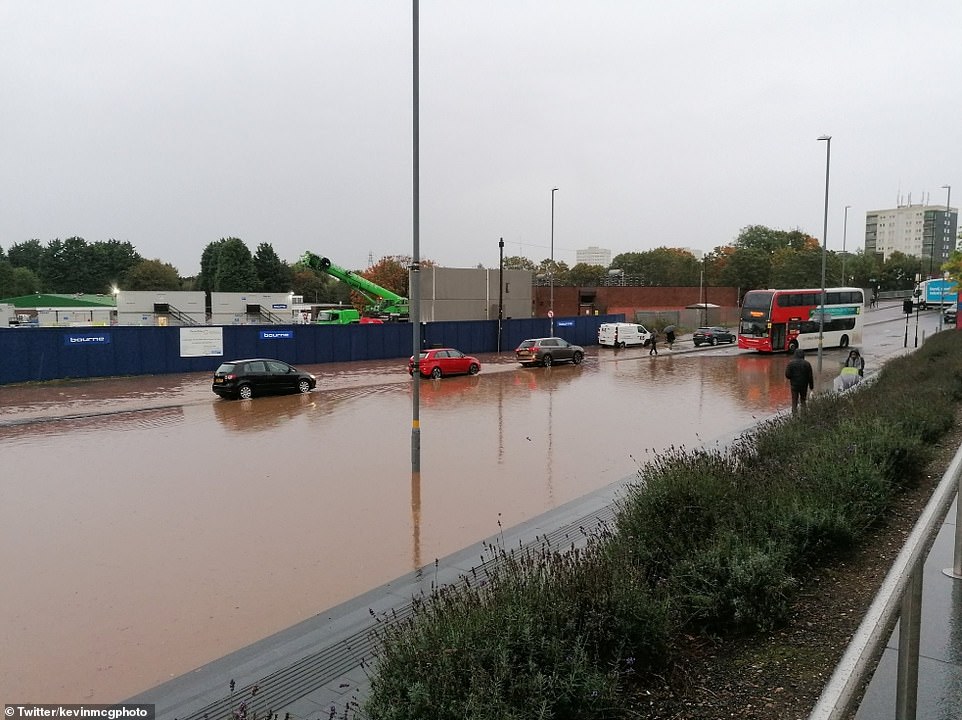 Cars in Birmingham struggled to make it through surface water and were seen mounting the pavement to get by, pictured 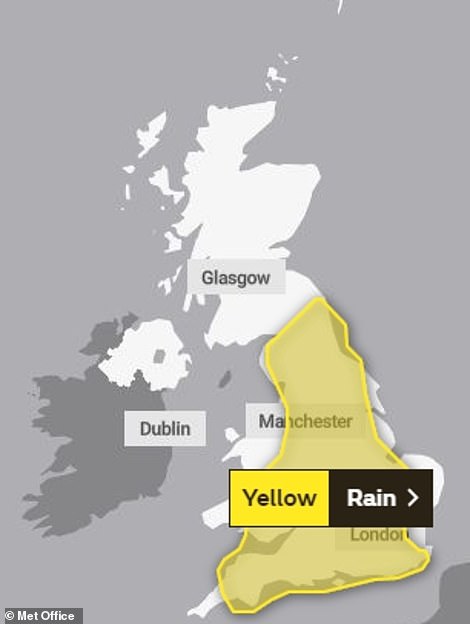 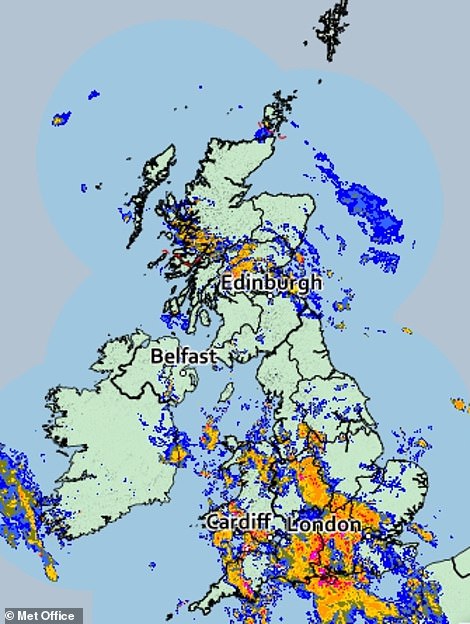 Widespread weather warnings have been issued up and down the country as thunderstorms bring in the region of 2.7 inches of rain in as little as six hours today, leading to fears of mass flooding and chaos for commuters 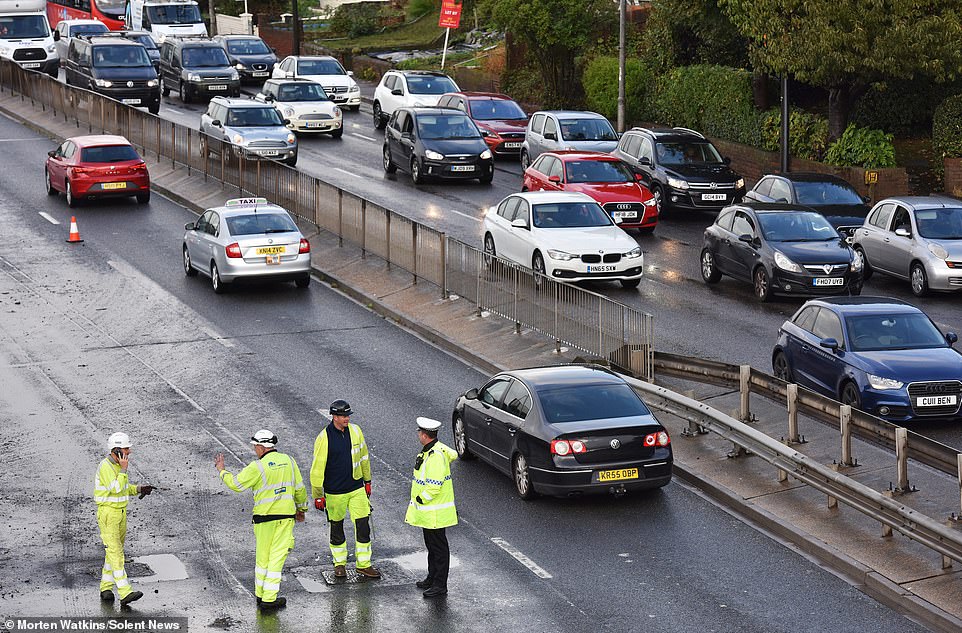 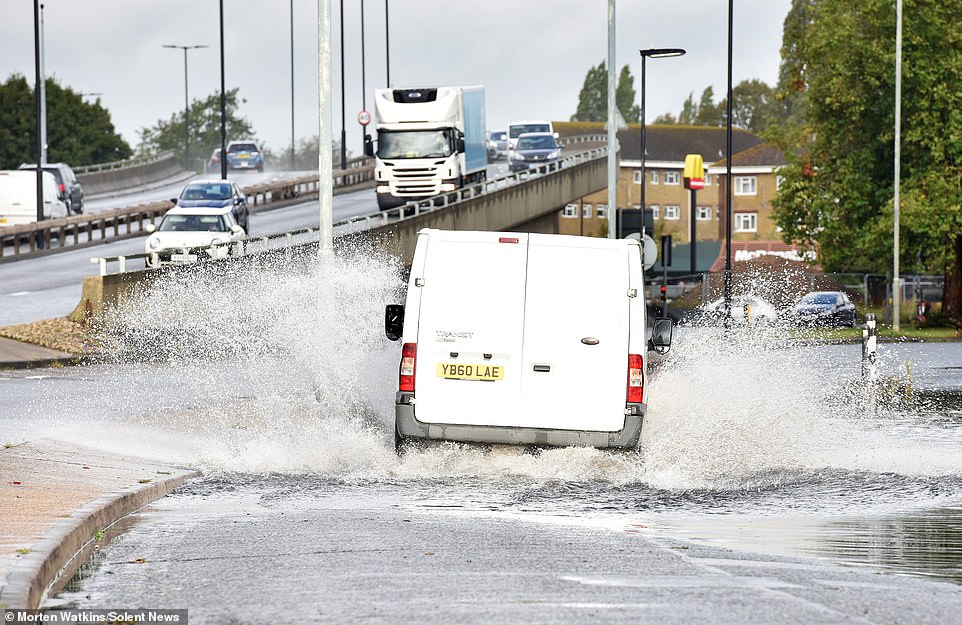 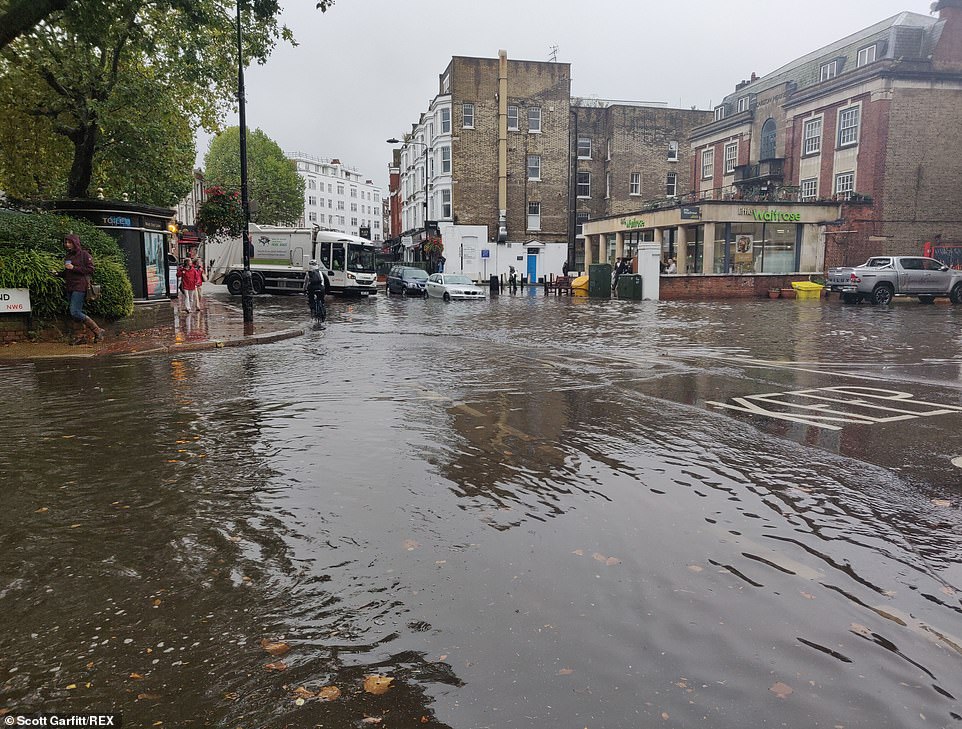 Roads in West Hampstead, London, have been completely submerged following the huge downpour so far today

Commuters are set to face the worst of the disruption, with buses and trains likely to be affected by the heavy rain.

A ‘brief respite’ in some parts is expected in the early afternoon, Mr Wilson said, adding that ‘more rain is predicted for the evening.’

Today’s weather warning is set to last until 11pm and although the heavy rain is expected to clear by Wednesday, a low-pressure front is expected to remain for the rest of the week.

This will bring bright and breezy weather to the UK along with some showers or prolonged spells of rain.

Temperatures could rise to the low 20s, which is slightly warmer than average for early autumn. The norm for this time of year is in the mid-to-high teens.

Yellow weather warnings were also in place in some places during the weekend, with scattered thundery showers on Sunday afternoon. 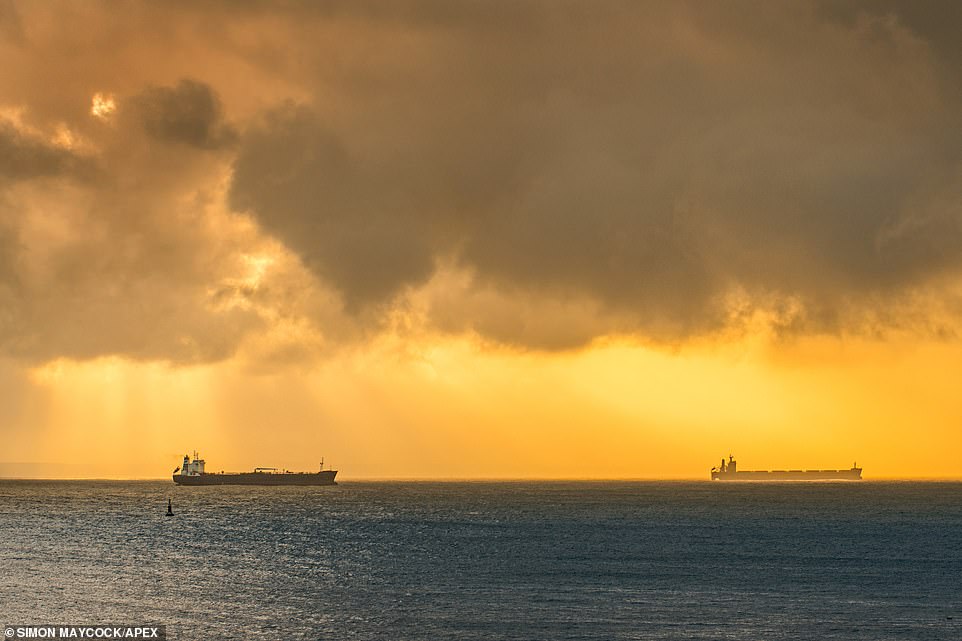 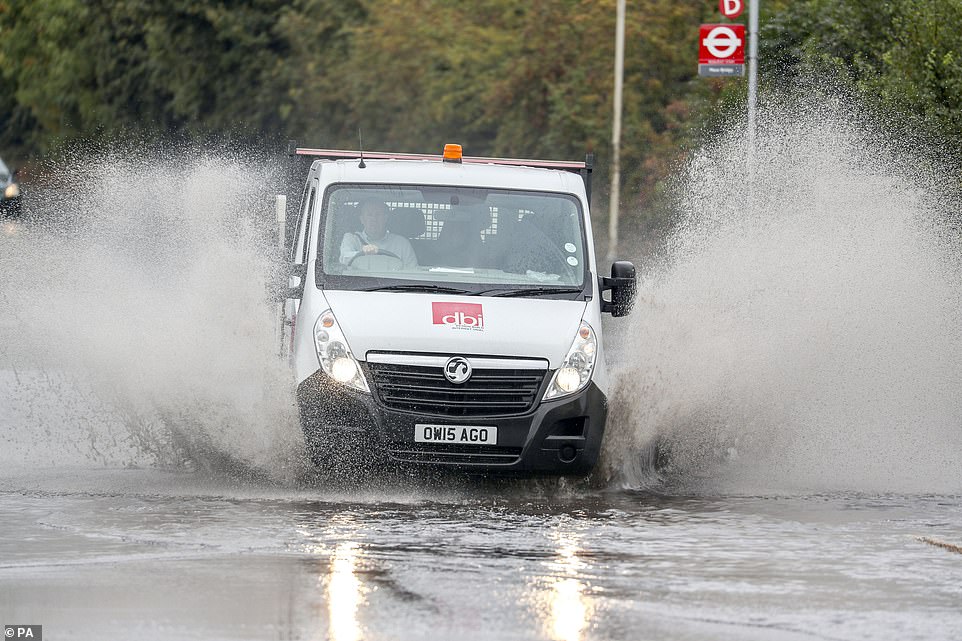 Drivers have been confronted with flooded roads all day, with a month of rain set to fall across England and Wales in the next 12 hours. Pictured is a van driving in Colnbrook, west London 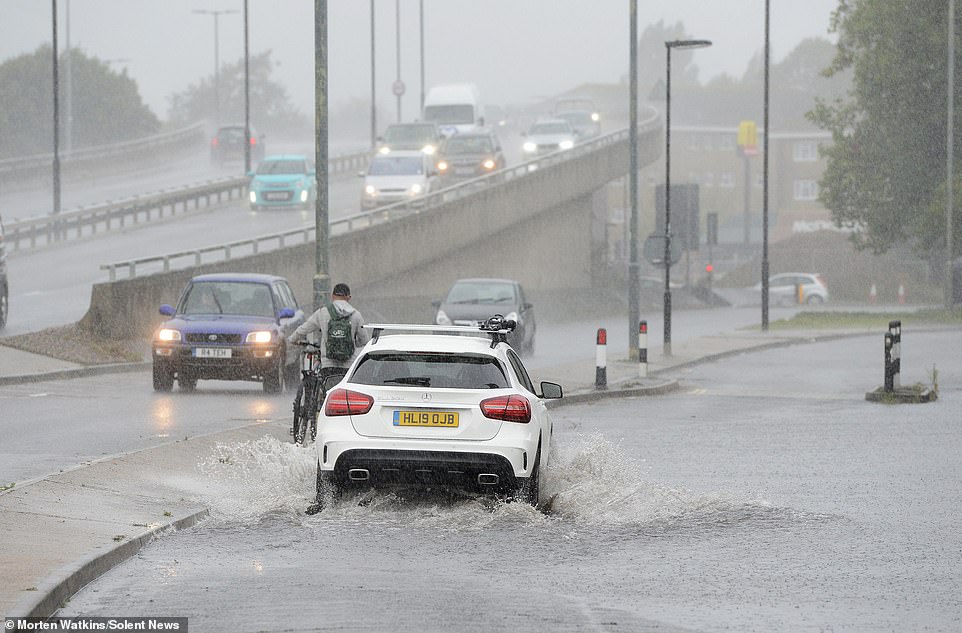 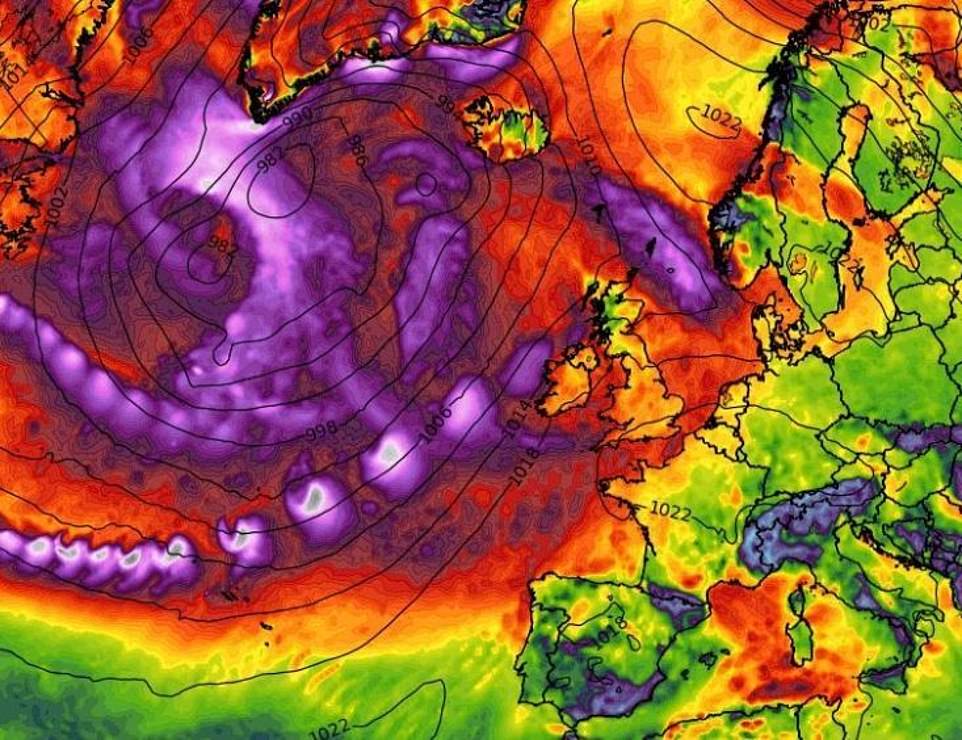 The downpour is being brought by a burst of low pressure travelling across the UK, along with warm and humid air linked to the remnants of Hurricane Humberto (pictured) which hit the Bermuda coastline last week