Tiger Woods fighting fit in superstar show in ‘The Match: Champions for Charity’

Tiger Woods fighting fit in superstar show as he and Peyton Manning take on Phil Mickelson and Tom Brady in ‘The Match: Champions for Charity’ with $10m to be donated to fight Covid-19

Seven holes was all it took on Sunday night for Tiger Woods to demonstrate in free-swinging style that he is one golfer who’s had a good lockdown.

Ninety-eight days ago, he walked off the 18th green at Riviera in Los Angeles with the gait of an old man. ‘My back feels tired, man,’ he confessed, after compiling a stiff-limbed score of 77 to finish dead last in the Genesis Invitational. When the game shut down in March, he was still on the sidelines.

‘How my back feels now is like night and day to how it felt then,’ he said on Sunday — and, gloriously, it showed.

Tiger Woods plays his shot from the 13th tee during ‘The Match: Champions For Charity’ 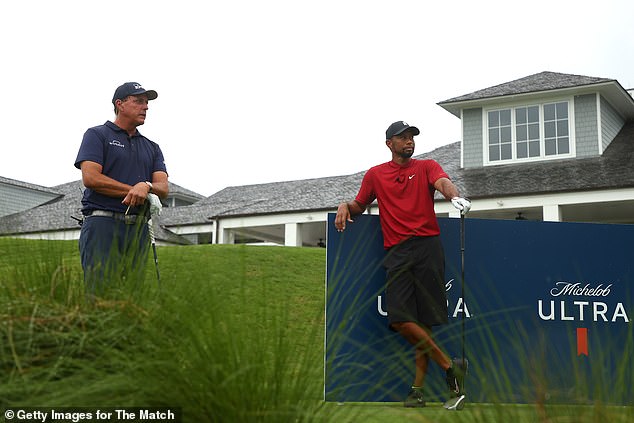 Woods played in a charity match with Phil Mickelson staged at his home course, the Medalist 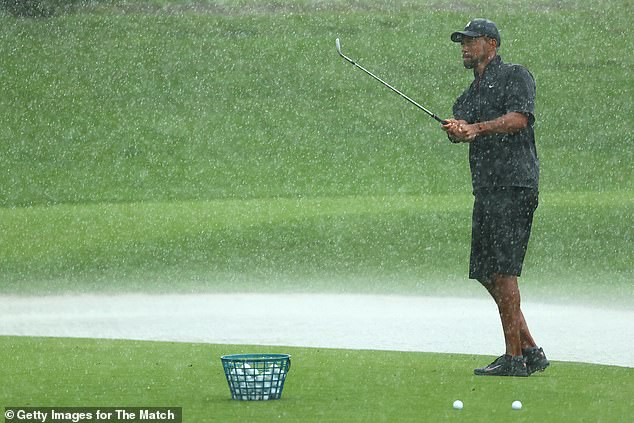 The start of ‘The Match: Champions for Charity’ was delayed due to poor weather in Florida

The occasion was a charity match with Phil Mickelson staged at Woods’s home course, the Medalist, located about an hour’s drive from Miami, Florida. The pair had playing partners arguably as famous as themselves in two superstar NFL quarterbacks. Alongside Woods was Peyton Manning, who played for the Indianapolis Colts, while Tom Brady, who won a record six Super Bowl rings with the New England Patriots, partnered Mickelson.

It looked as if the whole occasion would fall flat at the start. The rain was lashing down when Woods turned up dressed in his obligatory Sunday red, with the forecast remaining pretty grim. The first hole took a yawn- inducing 27 minutes.

From those unpromising circumstances, however, an entertaining occasion broke out. Manning, who plays off three, proved a fine story teller, while Mickelson’s commentary on his chip shot at the third was worth tuning in for on its own. Brady was so hopeless early on that Brooks Koepka rang in and said he’d donate $100,000 if the eight handicapper mustered a par on the front nine. 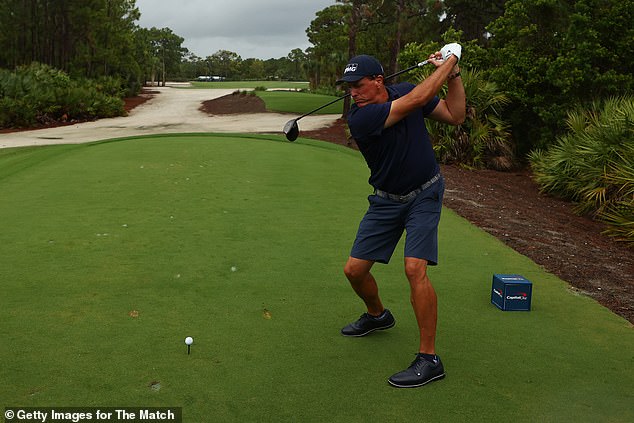 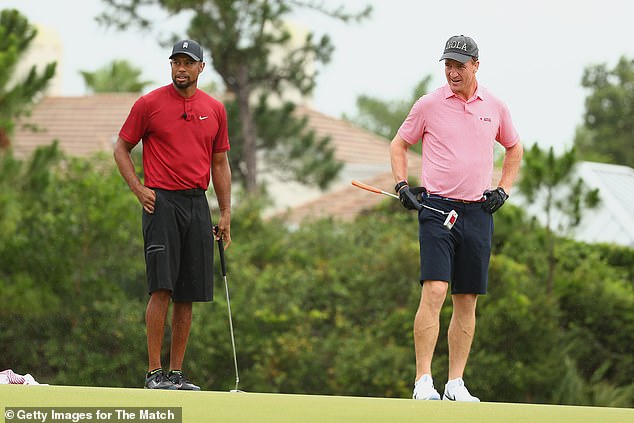 Alongside Woods was Peyton Manning, who played for the Indianapolis Colts

Basketball legend Charles Barkley, a wonderfully acerbic commentator, offered $50,000 if Brady could hit the par three 5th green. After he missed it by miles, he added: ‘Maybe I should have made it $50,000 if he’d kept it on the planet.’

Amazing isn’t it? You can win all those Super Bowls to be widely considered the best American football player of all time, yet stand next to Tiger on live TV with a golf club in your hand and you hit the ball sideways.

Brady took it in good spirits. ‘It’s two weeks since we start training again for the football season, and I’m ready,’ he said.

No-one could have predicted what happened next. From 140 yards at the par five 7th, Brady struck his first decent shot — and it finished in the hole.

Typical golf. Just when you think all hope has gone, it reels you back in. 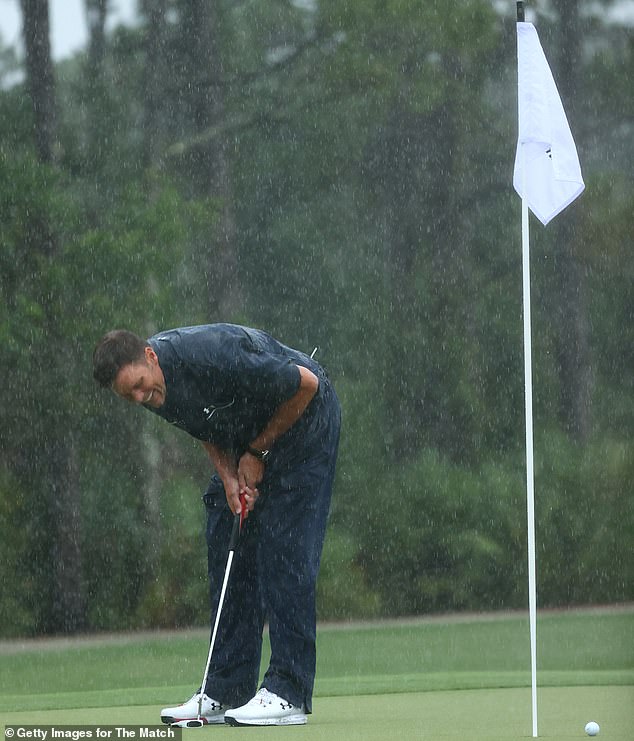 Mickelson was rubbish as well early on, but at the third we had a clinic from the man with perhaps the greatest short game of all time. He executed the shot exactly how he described it. ‘If only I could do that just once,’ said Barkley, echoing the thoughts of millions of viewers worldwide.

It turned out Tiger and Peyton had played plenty of games together. ‘I remember I was four up on him one time with six to go and he decided to raise the stakes,’ said Manning. ‘Up to that point Steve Williams, his caddie at the time, had been reading my putts but suddenly he started blanking me. I asked him why and he said: ‘Tiger tells me you’re now playing a match. So, no help’. You can probably guess the rest. Yep, Tiger beat me.’

What a warming sight to see 44-year-old Woods in full flow. Less than three weeks until the return of the PGA Tour, and now we can hardly wait.