It used to be the day when Tiger Woods took control at the majors. Now it is the one that underlines the stark limitations of his current physical state.

There is no shame in that, of course, given all he has been through, but it does come with sadness. At the Masters the 46-year-old limped and winced his way to a third round 78, his worst–ever score at Augusta.

It was a similar story at the 104th USPGA Championship yesterday where he shot 79, his worst score in this major. Moving day they might call it but for Woods, poignantly, the direction was all downhill.

What a contrast to the excitement of the previous day, when Woods came through what proved an epic battle to make the halfway cut. ‘Given the pain he was obviously in, it was a monumental effort,’ said playing partner Rory McIlroy.

Trouble is, all the evidence from here and Augusta is it takes so much out of Woods, there is little left to give at the weekend. He looked utterly exhausted as he walked off the 18th green.

Woods spoke briefly afterwards and was non-committal over whether he will make today’s final round. ‘I feel very sore right now and we’ll have to evaluate everything back at the rental house,’ he said.

Woods had clearly not been helped by the dramatic change in the weather. When he left the arena on Friday afternoon, he was sweating buckets in the 32 degree heat.

When he returned yesterday morning, he was wearing four layers with the temperature dial showing 13 degrees. Needless to say, not what you want with a fused back and a battered right leg. 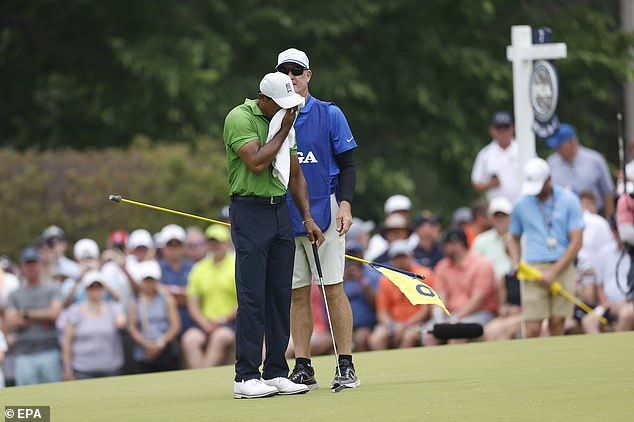 In the history of major championship golf, has there ever been a transformation quite like this? Not only the heat, but a storm that passed through during the early hours dumped almost two inches of rain, turning a course from hard as concrete into soft as sand.

Whatever the weather, it did not deter 40,000 people from wrapping up in hoodies, showing up early and all heading in the same direction. Golf fans know it might not be long before Woods calls it quits and clearly want to savour every last appearance.

At the opening hole, he grinded hard on a 15ft par putt and drew quite the cheer when he made it. That, alas, was about as good as it got.

At the second hole a creek that runs through the fairway was not even in play over the first two days but Woods found it. So the problems began.

‘Is that in the f***ing water?’ was his exasperated cry as another ball found a penalty area at the par three 6th. Given the hazard was 20 yards short of where his ball ought to have been landing, it gives an idea of how difficult the conditions were, plus Woods’ problems in tempering them. 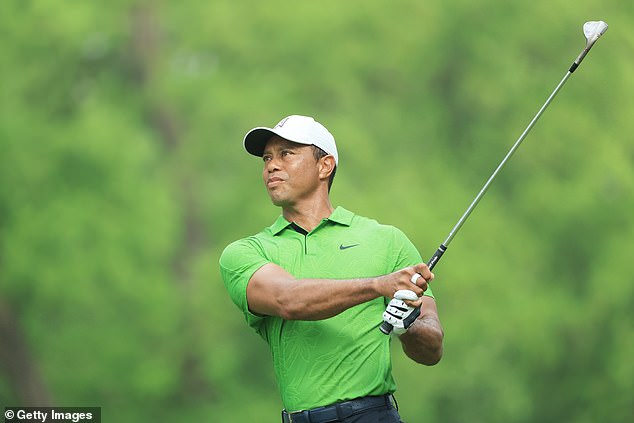 At the par four 9th, after driving into a bunker, he had no idea where his recovery shot had finished until caddie Joey LaCava pointed out the ball was embedded in the face of a trap. At least he was allowed a free drop but the bogey meant a front nine played in 41 strokes.

It did not got a lot better. After three more bogeys in a row it looked as if there might be some light relief at the par five 13th, where the tee was moved up dramatically to shave 100 yards off its previous length of 631 yards. Level with the target after two blows, Woods thinned his chip shot into a similar spot on the other side of the green. It was like watching a great actor standing on stage, unable to deliver his lines.

His next chip finished 10ft past and when he missed the putt for par, we had another sad statistic. In his 83rd major as a professional, this was the first time Woods had ever had five bogeys in a row.

If truth be told, it looked like there might be a few more, given the severity of the finish.

Instead, Woods mercifully found a bit of rhythm, stopping the rot with a par at the 14th and then holing a 30ft putt for his first and only birdie of the day. The relief on his face and among those in the audience was palpable. Three more pars would follow. 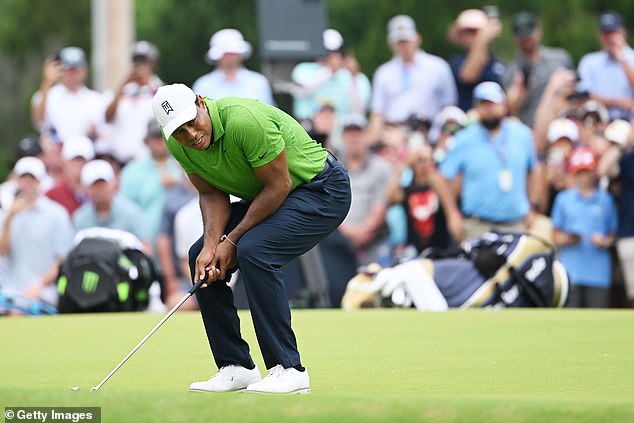 As he departed, halfway leader Will Zalatoris began his warm-up. He started with a one-shot lead over Chile’s Mito Pereira and three ahead of his fellow American Justin Thomas, with McIlroy five back and Matt Fitzpatrick six adrift.

The strangest bogey you will see all year? That belonged to American Kramer Hickok on the par four 12th.

In a fried egg lie in a greenside bunker in two, his recovery never made it over the lip and came back into his footprints. He never got the next one out either.

At least for his third attempt he had a good lie. A perfect one, in fact. On the ball rolled, bouncing into the flagstick and falling below ground.

‘Honestly, the things this game puts you through,’ said Sir Nick Faldo on American television.

Tiger and his Tulsa army will testify to that.