She earlier this year won substantial damages against the BBC’s false allegations of an affair with King Charles.

And now Tiggy Pettifer – better known as Tiggy Legge-Bourke – is offering to knit socks as part of an auction for one of the charities the new monarch is patron of.

Princes William and Harry’s old nanny, 57, will grant the cosy, handmade items to the highest bidder in an event organised by the Edinburgh-based Atlantic Salmon Trust.

The cash raised will be used for research into the reasons why the ‘king of fish’ are disappearing from many of the country’s rivers.

Tiggy has remained close to the royal family since she was nanny to the Duke of Cambridge and Duke of Sussex as children. Prince Harry is godfather to Tiggy’s son Fred. And the Duke and Duchess of Sussex reportedly returned the favour by asking Tiggy to be godmother to their son, Archie, at his Windsor christening in 2019. 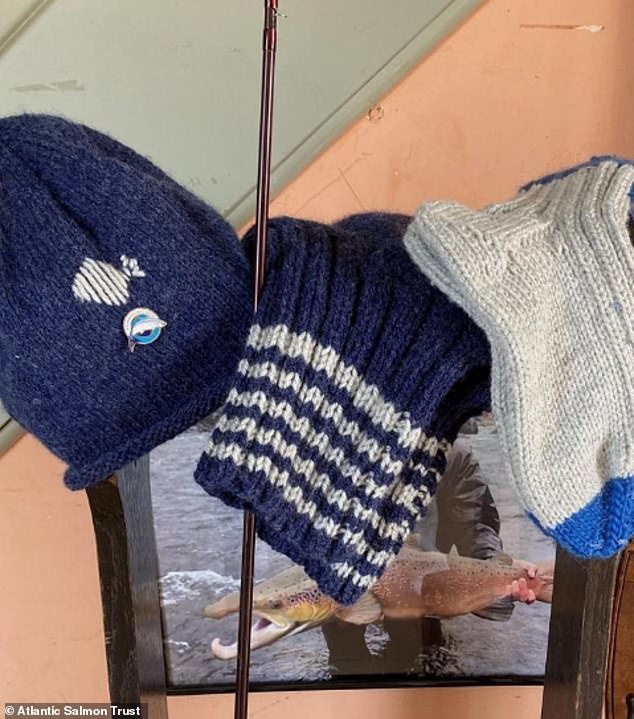 Tiggy – who is an advanced fly fishing instructor – is understood to be reprising the popular auction after its ‘runaway success’ last year, according to the trust

The appeal, as promoted on the charity’s website, promises a ‘bespoke pair of his and hers wading socks’ as well as a beanie hat – and it looks like someone has already bid £500 for the prize.

Tiggy – who is an advanced fly fishing instructor – is understood to be reprising the popular auction after its ‘runaway success’ last year, according to the trust.

‘A most coveted item,’ it continued. ‘Get your bids in fast as in previous years these socks sold for over £1,000 for one pair alone!’

Keen fisher Charles is patron of the Atlantic Salmon Trust, which wrote to river owners throughout the UK and Ireland asking for donations for its online auction. It closes on November 17. 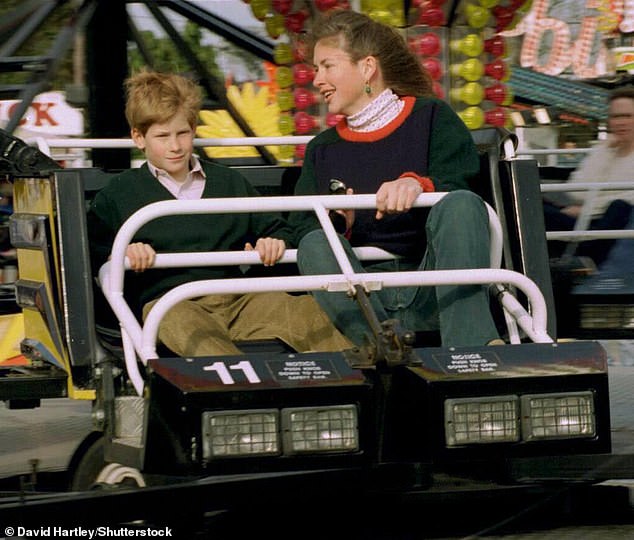 Tiggy (pictured with Prince Harry in 1995) – who is an advanced fly fishing instructor – is understood to be reprising the popular auction after its ‘runaway success’ last year, according to the trust

A constant by the princes’ side while they were growing up, Pettifer has remained close to both the royals over the years, and met Meghan before they married.

The Duke of Sussex is godfather to her son Tom Pettifer, who was pictured at the royal wedding.

Earlier this year it was revealed that the BBC is paying damages to the ex-nanny over false claims made about her to obtain a 1995 Princess Diana interview.

In July Earl Spencer again reiterated his call for criminal charges over the Princess Diana Panorama scandal – as the BBC issued a grovelling apology over the ‘shocking’ way Martin Bashir obtained the notorious interview.

Corporation boss Tim Davie pledged to never show the programme again as a defamation case launched by Mrs Legge-Bourke over smears made by the rogue reporter came to a close.

The broadcaster agreed to pay her substantial damages in response to ‘fabricated’ allegations that she’d had an affair with the Prince of Wales while working as Charles’ personal assistant in 1995.

Mr Bashir is also said to have tricked Diana into believing the nanny had become pregnant by Charles by showing her a faked abortion ‘receipt’. 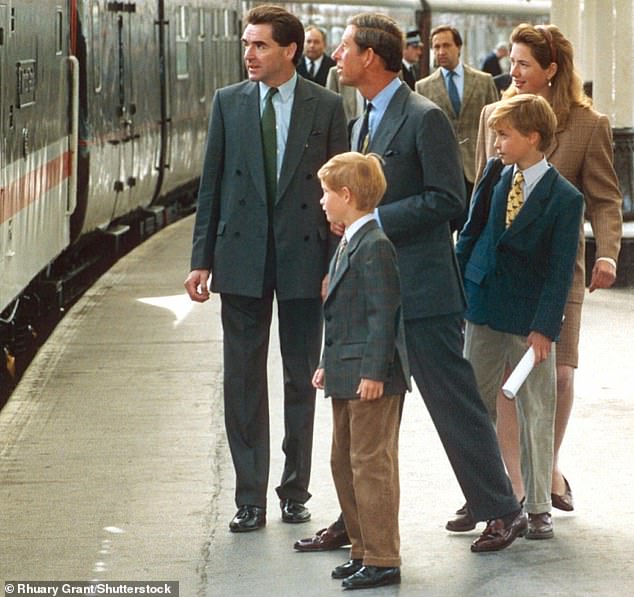 Tiggy (pictured with Prince William, Prince Harry, bodyguard Tony Parker and King Charles III in 1993) earlier this year won substantial damages against the BBC’s false allegations of an affair with the King

The princess’ brother has long called for criminal charges to be brought, but Scotland Yard said it would not launch an investigation after assessing Lord Dyson’s report into the documentary.

Earlier this year, he launched a fresh call, as he said: ‘While I’m delighted to see that another innocent victim of this appalling scandal is being vindicated, it’s amazing to me that no criminal charges have been levelled against those responsible, yet.’

Ms Legge-Bourke’s solicitor Louise Prince had earlier told the court that the allegations caused ‘serious personal consequences for all concerned’.

The BBC apology to Tiggy Legge-Bourke in full

‘Following publication of the Dyson Report last year we have been working with those who suffered as a result of the deceitful tactics used by the BBC in pursuit of its interview with Diana, Princess of Wales for the Panorama programme in 1995, including the matters that were mentioned in court today in respect of Miss Tiggy Legge-Bourke, now Mrs Alexandra Pettifer.

‘The BBC has agreed to pay substantial damages to Mrs Pettifer and I would like to take this opportunity to apologise publicly to her, to the Prince of Wales, and to the Dukes of Cambridge and Sussex, for the way in which Princess Diana was deceived and the subsequent impact on all their lives.

‘It is a matter of great regret that the BBC did not get to the facts in the immediate aftermath of the programme when there were warning signs that the interview might have been obtained improperly. Instead, as the Duke of Cambridge himself put it, the BBC failed to ask the tough questions.

‘Had we done our job properly Princess Diana would have known the truth during her lifetime. We let her, the royal family and our audiences down.

‘Now we know about the shocking way that the interview was obtained I have decided that the BBC will never show the programme again; nor will we licence it in whole or part to other broadcasters.

‘It does of course remain part of the historical record and there may be occasions in the future when it will be justified for the BBC to use short extracts for journalistic purposes, but these will be few and far between and will need to be agreed at executive committee level and set in the full context of what we now know about the way the interview was obtained. I would urge others to exercise similar restraint.’

Ms Prince said that Ms Legge-Bourke had not known the source of the allegations over the last 25 years, but that it was now likely that the ‘false and malicious allegations arose as a result and in the context of BBC Panorama’s efforts to procure an exclusive interview with Diana, Princess of Wales’.

The corporation’s director-general Mr Davie directed a public apology to Charles, William and Harry, as well as Miss Legge-Bourke herself ‘for the way in which Princess Diana was deceived and the subsequent impact on all their lives’.

He agreed with comments previously made by the then-Duke of Cambridge that the BBC ‘failed to ask the tough questions’ and admitted it was ‘a matter of great regret’ that bosses ‘did not get to the facts’.

Mr Davie pledged to never show the Panorama programme again, or provide the rights to other broadcasters, adding: ‘Had we done our job properly Princess Diana would have known the truth during her lifetime.

‘We let her, the royal family and our audiences down.’

However Mr Davie added that ‘there may be occasions in the future when it will be justified for the BBC to use short extracts’.

In a statement on the independent report last year, the Met Police announced it was ‘not appropriate to begin a criminal investigation into allegations of unlawful activity in connection with a documentary broadcast in 1995’.

‘Following the publication of Lord Dyson’s report in May, specialist detectives assessed its contents and looked carefully at the law – once again obtaining independent legal advice from Treasury Counsel as well as consulting the Crown Prosecution Service,’ the force said.

‘As a result, the MPS has not identified evidence of activity that constituted a criminal offence and will therefore be taking no further action.’

Speaking after successfully settling her defamation claim, the former nanny said: ‘I am disappointed that it needed legal action for the BBC to recognise the serious harm I have been subjected to.

‘Sadly, I am one of many people whose lives have been scarred by the deceitful way in which the BBC Panorama was made and the BBC’s subsequent failure to properly investigate the making of the programme.

‘The distress caused to the royal family is a source of great upset to me.

‘I know first-hand how much they were affected at the time, and how the programme and the false narrative it created have haunted the family in the years since.

‘Especially because, still today, so much about the making of the programme is yet to be adequately explained.’

Jonathan Scherbel-Ball of lawyers 5RB on behalf of the BBC told the court: ‘The BBC accepts that the allegations were wholly baseless, should never have been made, and that the BBC did not, at the time, adequately investigate serious concerns over the circumstances in which the BBC secured the Panorama interview with Diana, Princess of Wales…

‘The BBC is extremely sorry for the serious and prolonged harm caused to (Mrs Pettifer) and the historical investigative shortcoming. 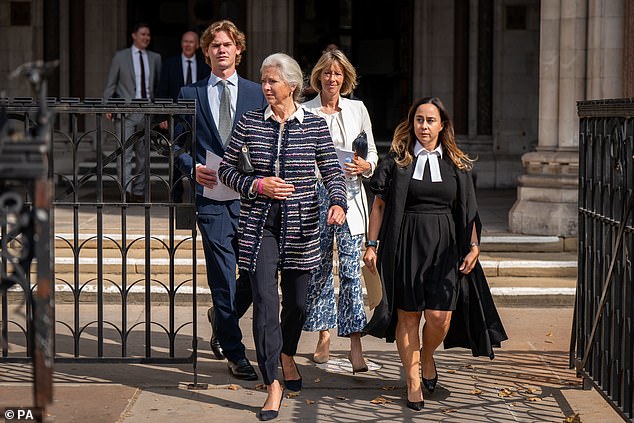 The corporation’s director-general Mr Davie directed a public apology to Charles, William and Harry, as well as Ms Legge-Bourke (pictured earlier this year) herself ‘for the way in which Princess Diana was deceived and the subsequent impact on all their lives’

‘It is pleased that the parties have been able to resolve these issues amicably by joining in this statement in open court and by the BBC paying her substantial compensation and legal costs.’

Former BBC Panorama producer Mark Killick said: ‘It’s good news that this matter has finally been resolved, but the length of time it has taken for the BBC to apologise and pay damages is yet more proof that the BBC is dragging its feet when confronting the past.

‘The BBC remains extremely reluctant to confront any issue that was not specifically covered by Lord Dyson, even if the truth is widely known, and its attitude is hardly likely to give confidence to whistle-blowers who today may want to speak truth to power.

‘Tim Davie, the current BBC director-general, deserves credit for the steps he has taken, but whether the BBC has done enough to prevent a scandal like this from happening again remains to be seen.’