Un-Happy Meal: Bizarre moment two men brawl outside a McDonald’s in front of peak-hour traffic – but it’s the cop walking behind them that has everyone talking

A brawl has erupted outside a busy McDonald’s but it didn’t seem to faze a police officer who was spotted strolling casually behind the combatants.

Footage uploaded to TikTok on Wednesday shows a man fleeing from a McDonald’s in Otahuhu, in Auckland New Zealand with two others giving chase.

The man is filmed making a speedy get-away on foot, before another man dressed in a red shirt attempts to tackle him to the ground.

The third person is seen falling into a sign post near the busy intersection before the man in red is knocked to the ground by the speedy assailant.

But it’s the police officer strolling casually behind the brawl in the background that has stirred attention online.

‘The cop, taking a Sunday stroll,’ one TikTok user joked.

‘The cop doesn’t seem that keen to run,’ commented another.

‘Police in the back like “yeah they got it”,’ added a third. 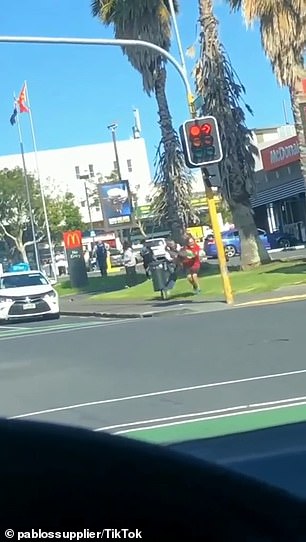 Others suggested one of the men would be better suited on the rugby field, with one user writing, ‘Someone needs to sign him for the Warriors team’.

‘Give him a go with the Warriors, at least he can fend,’ recommended another.

‘So much sporting going on here, power walking, pole vault, sprints and rugby…’ joked a third.