A 12-year-old girl has taken her Christmas list to another level after creating a detailed PowerPoint presentation complete with sections, photos, and hyperlinks.

TikTok star Krystiana, who has more than 1.9 million followers, went viral when she shared a video of her daughter Ava outlining the thousands of dollars worth of gifts she hopes to find under the tree this year, including an iPhone and Apple Watch.

‘I now present to you, my Christmas list,’ the tween announced at the start of her presentation, which has sparked a debate about the true meaning of the holiday.

Krystiana, an influencer and mother of four, shared a video of her daughter Ava presenting her PowerPoint Christmas list on TikTok 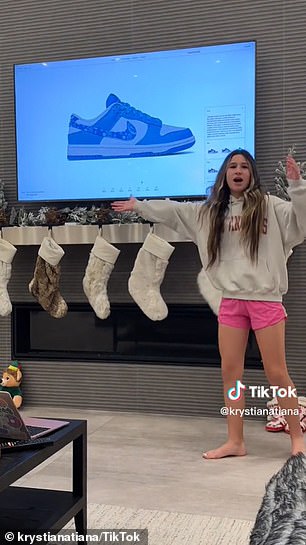 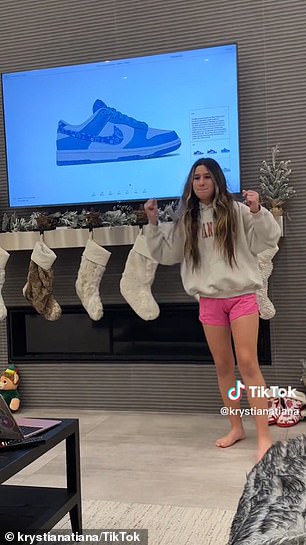 The organized tween divided the slideshow featuring thousands of dollars worth of items into detailed sections that included photos, sizes, and hyperlinks 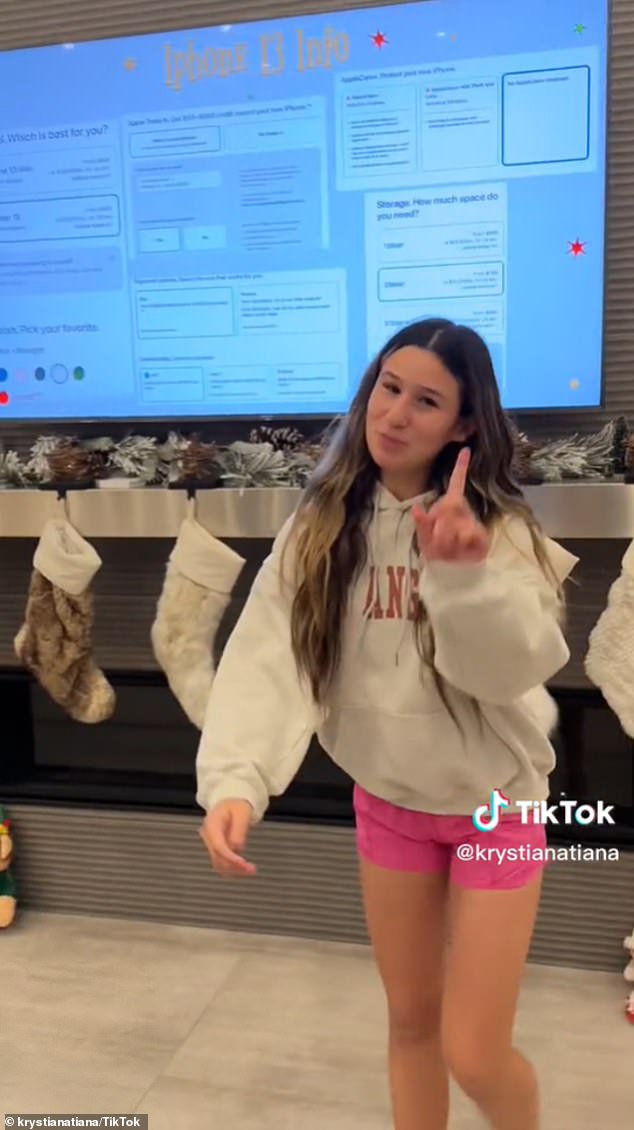 ‘Wow, you made it so easy for me,’ her mom joked from behind the camera

Ava had three pairs of Nike sneakers in the shoe section, including Air Jordans and Dunk Lows that cost more than $150 apiece.

She proudly pointed out that she has the names of each style listed along with the hyperlinks to make checkout a breeze for her parents.

‘You click on it, and then it takes you to the website to buy them,’ she explained.

‘Wow, you made it so easy for me,’ her mom joked from behind the camera.

Unsurprisingly, the electronics section featured some of the most expensive items on her Christmas list. 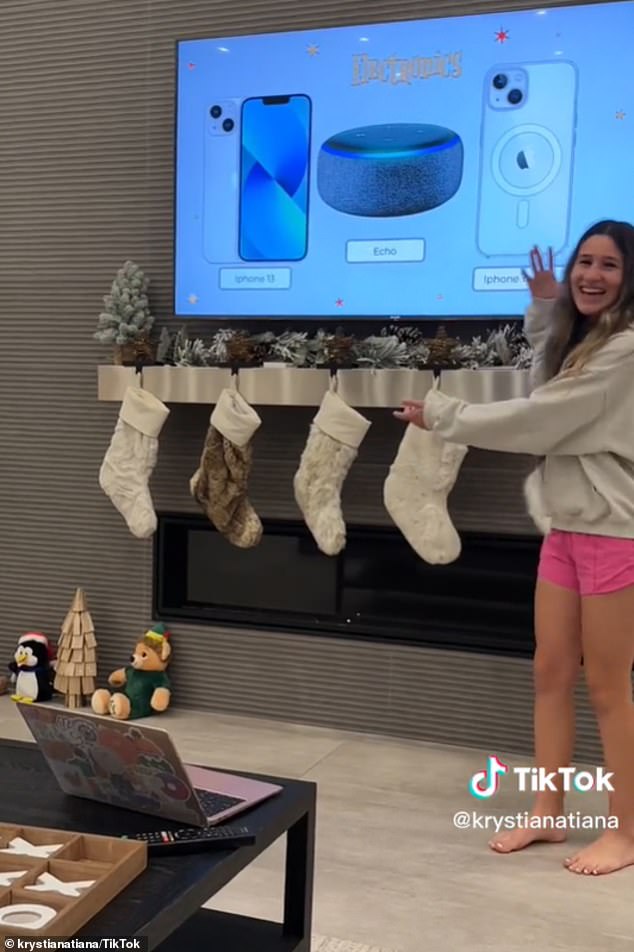 Ava asked for an iPhone 13, an Apple Watch, AirPods, and an Echo in the electronics section 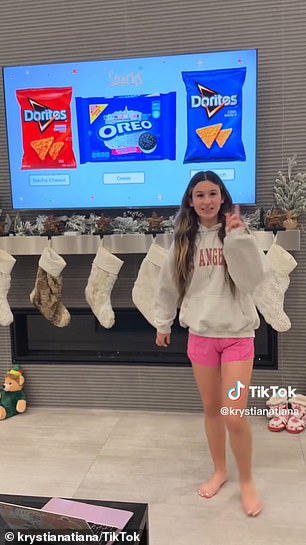 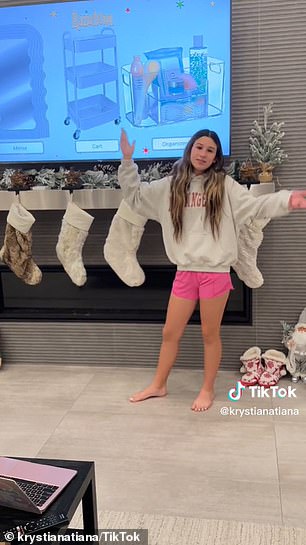 ‘Now, this is the slide where I want dad to look away,’ she admitted.

The least expensive items on the list were the bags of Doritos and Oreos that she wanted to go along with the snack cart for her bedroom.

‘When I am sick you guys don’t have to buy me anything because I’ll already have stuff,’ she told her parents, as if she was doing them a favor.

In the perfume section, she had not one, but three bottles from Ariana Grande’s collection — Cloud, Sweet Like Candy, and Thank U Next — which cost $45 to $65 apiece. 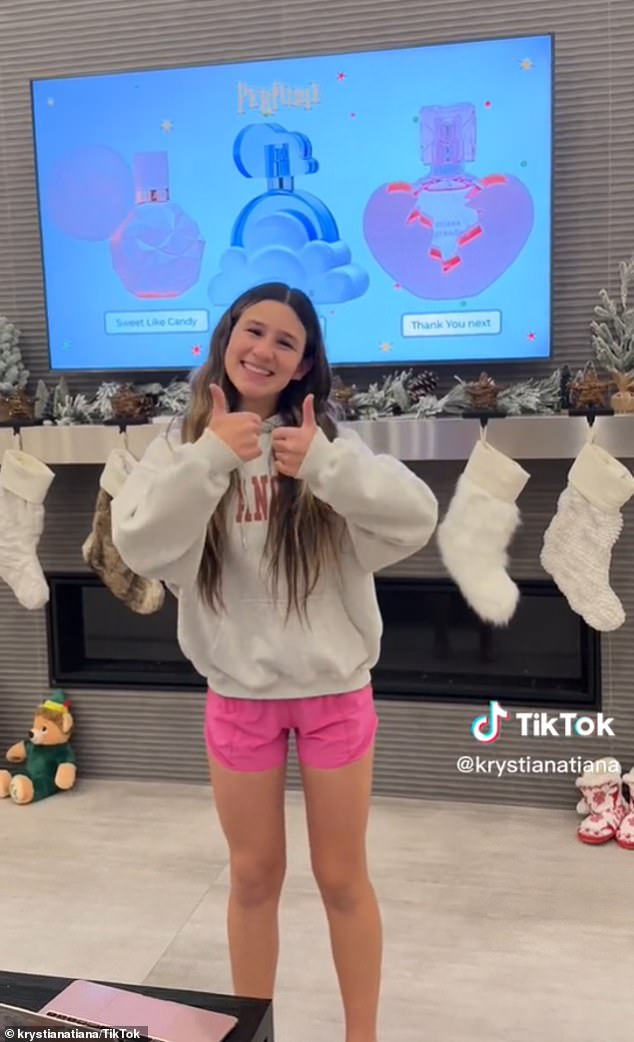 ‘That’s it,’ Ava said at the end of her presentation, giving the camera two thumbs up

The video has been viewed more than 15.7 million times and sparked a debate about the true meaning of Christmas in the comments

‘That’s it,’ Ava said at the end of her presentation, giving the camera two thumbs up.

‘Christmas lists in 2022,’ Krystiana wrote in the caption.

The video has been viewed more than 15.7 million times since it was posted on November 25, the day after Thanksgiving.

Thousands of people flocked to the comments to share their thoughts, with some admitting their frustration over the commercialization of the holiday.

‘I don’t know why but Christmas just doesn’t feel like Christmas anymore,’ one viewer responded, while another added: ‘I just want to feel the Christmas spirit again.

‘How do people get so much for Christmas?’ someone else asked. 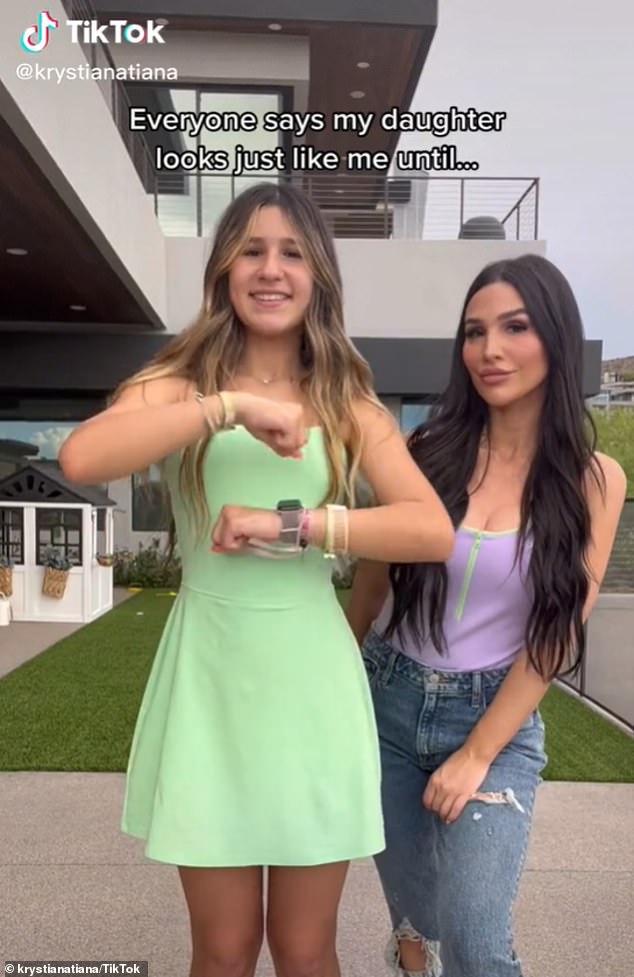 Some viewers were frustrated over the commercialization of the holiday, while others praised Ava (pictured with her mom) for her skills, insisting she will be a CEO one day 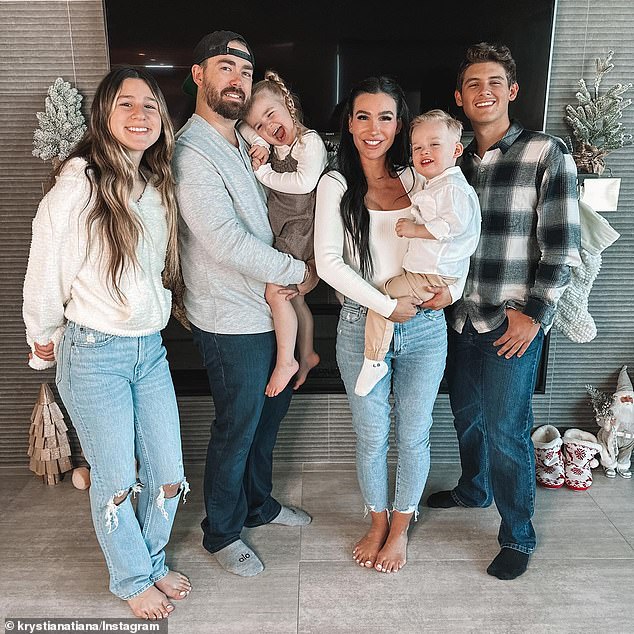 Krystiana often shares videos of her family on TikTok, where she has more than 1.9 million followers

There were also plenty of fans who praised Ava for putting in the effort to make such a detailed presentation stating her case.

‘I LOVE THIS! We got a Ted talk & PowerPoint this year,’ one parent shared.

‘She’s going to be a very successful [organized] adult. Very bright future,’ someone else commented.

‘She’s gonna be a CEO one day,’ another agreed.

A number of people also pointed out that just because Ava made an expansive list, it doesn’t mean that she is getting everything on it.

‘She’s dreaming,’ her mother responded in the comments.