A plastic surgeon has issued a stark warning about the dangers of breast enhancements, while sharing a horrifying video of 35-year-old implants that had ruptured inside a patient and then calcified.

Dr. Nicole Castellese, 47, is a double-board certified surgeon who has worked in the industry for decades – however even she was shocked by what she found after removing breast implants from a 65-year-old woman, who had undergone her augmentation back in 1985.

In the footage, which has racked up more than 4.8 million views, the surgeon holds up each of the implants, revealing huge holes in the exterior wall of each one, and showing off the thick, sticky silicone that was leaking from each one. 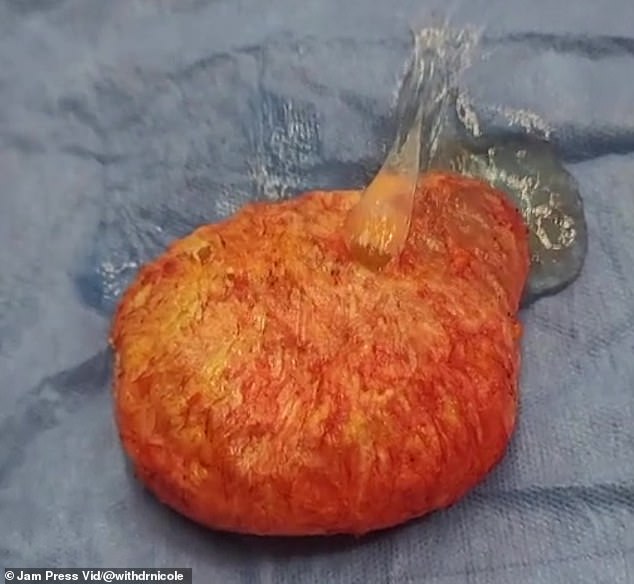 Dr. Nicole Castellese, 47, is a double-board certified surgeon with decades of experience – however even she was shocked by what she found after removing the breast implants 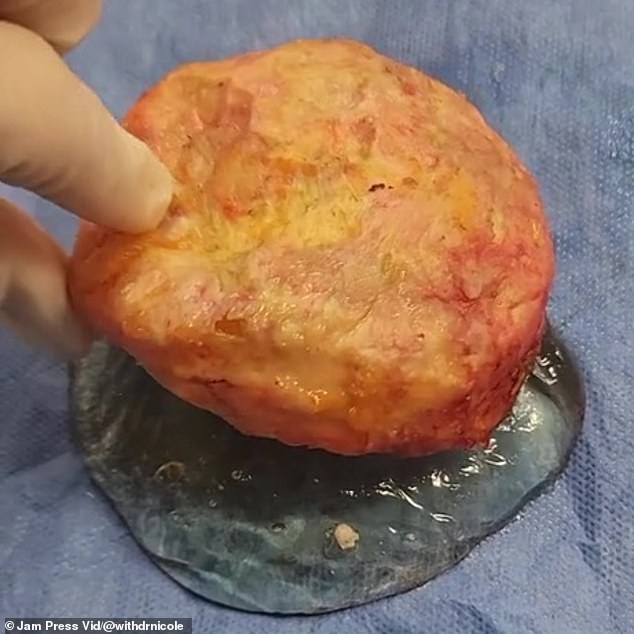 In a video shared to her TikTok page, Dr. Castellese revealed that the wall of the implants had ruptured, allowing a sticky silicone substance to leak out of them 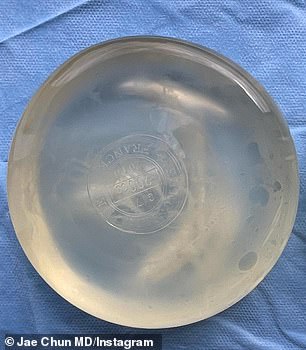 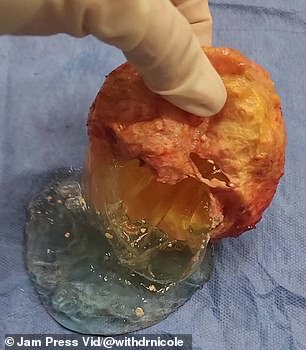 She explained that the capsule of the implant had ‘hardened and calcified’, while rolling the implants around to allow the silicone to leak out of them. A new implant is seen left

In her caption, the surgeon – who has her own practice in Tulsa, Oklahoma, called The Institute for Beauty, Wellness & Regenerative Medicine – revealed that the unnamed patient had originally had the implants put in back in 1985, and had been told by a surgeon in the 90s that they were fine to keep in. 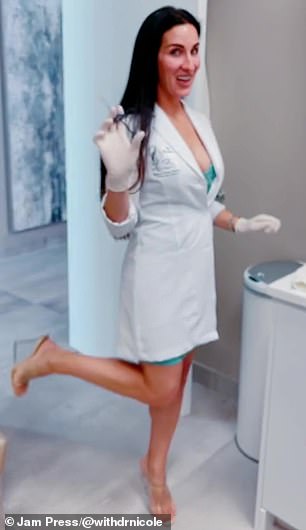 Dr. Castellese (pictured) runs her own practice, The Institute for Beauty, Wellness & Regenerative Medicine in Tulsa, Oklahoma, and has performed millions of breast implant procedures

‘The capsule had hardened and calcified. A plastic surgeon in the 90s recommended she keep them.’

In the clip, she is seen moving each of the implants around, allowing the sticky silicone substance to ooze out of the burst sacks.

‘[I do] quite a lot of explants (breast implant removal) due to patient demand and subsequent patient satisfaction which leads to more and more patients,’ she explained.

‘The patient who had the ruptured implants on the TikTok is a 65-year-old woman who had her implants placed in 1985.

‘She had a mammogram over a year before coming to me, which suggested one of her implants was ruptured.’ 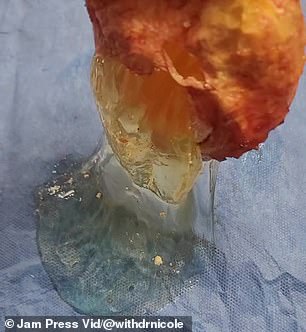 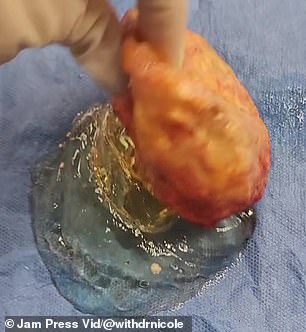 Dr. Castellese added that there is no way to know if an implant has ruptured inside the body and encouraged her followers to get an MRI to know for sure

She added: ‘In her case, she didn’t receive the best medical advice regarding the implant removal and financial coverage for the surgery was another factor contributing to her delay in treatment.

‘After seeing her and reviewing her history and goals, we were able to schedule her for breast implant removal, capsulectomy, mastopexy and drain placement.’

The surgeon’s TikTok video documenting the state of the ruptured implants left viewers up in arms – with many joking that they initially thought the implants were some kind of food.

‘I thought that was a jelly-filled donut for a sec,’ commented one person.

‘So we really all saw bread or some sort of baked good at first,’ another user chimed in, as one added: ‘Why did I think it was school food.’

‘Forbidden slime,’ someone else wrote.

‘I thought this was an apple turnover. Should have had dessert after dinner,’ wrote a fifth person.

When asked how people had reacted to the shocking rupture, Dr. Castellese added: ‘There was a lot of confusion and shock over the ruptured implant.

‘Most people thought it was food…. jelly donuts, biscuits and chicken were popular guesses.’

To clear up her followers confusion, she said: ‘Since breast implants are a foreign body, our body responds by walling off the implant with a layer of scar tissue.

‘The scar tissue around the implant is referred to as a capsule.’

TikTok users were shocked to learn that the clip revealed a breast implant, many users originally thought the implant was as ‘jelly-filled donut’

But while many social media users were quick to criticize breast implants due to the ‘jelly donut’ resemblance the doctor said: ‘This is not unique to breast implants. People with pacemakers or prosthetic joints have capsules around those too.’

‘If a silicone implant ruptures, the rupture is typically contained within the capsule, but it is possible for it to go beyond the capsule and therefore, once a rupture is identified, the implant should be removed.’

The doctor went on to explain the different breast implants and how to spot a ruptured implant.

‘This is different from saline implants because if those rupture, the breast deflates alerting the patient to the problem.’

The doctor followed up with a video replying to people’s questions.

In the clip, she explains why silicone implants should not be kept in for longer than 10 years and encouraged people with older implants to consider screening because when an implant ruptures inside the body, it can go undetected, so the only way to know whether or not an implant has burst is through an MRI.