A TikTok user has opened up about the importance of regularly getting tested for sexually transmitted diseases after what was initially diagnosed as strep through turned out to be HIV.

Kyle, who is known as @saintkyle13 and uses they/them pronouns, explained in a recent video that they went to urgent care with a sore throat and were sent home with antibiotics after the doctor told them it was strep.

Not only did their sore throat return, but they also lost 30 pounds and could barely walk. After they underwent further testing, they were diagnosed with HIV.

‘Get tested regularly and ask your partners what their status is!’ the Los Angeles resident wrote in the caption. ‘Knowledge is power.’

Kyle, who is known as @saintkyle13 and uses they/them pronouns, opened up about their HIV diagnosis in a recent TikTok video 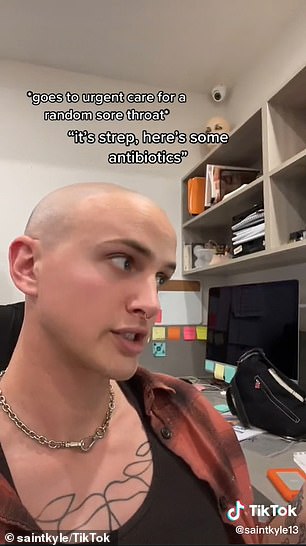 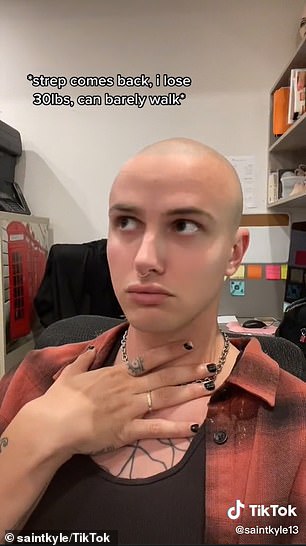 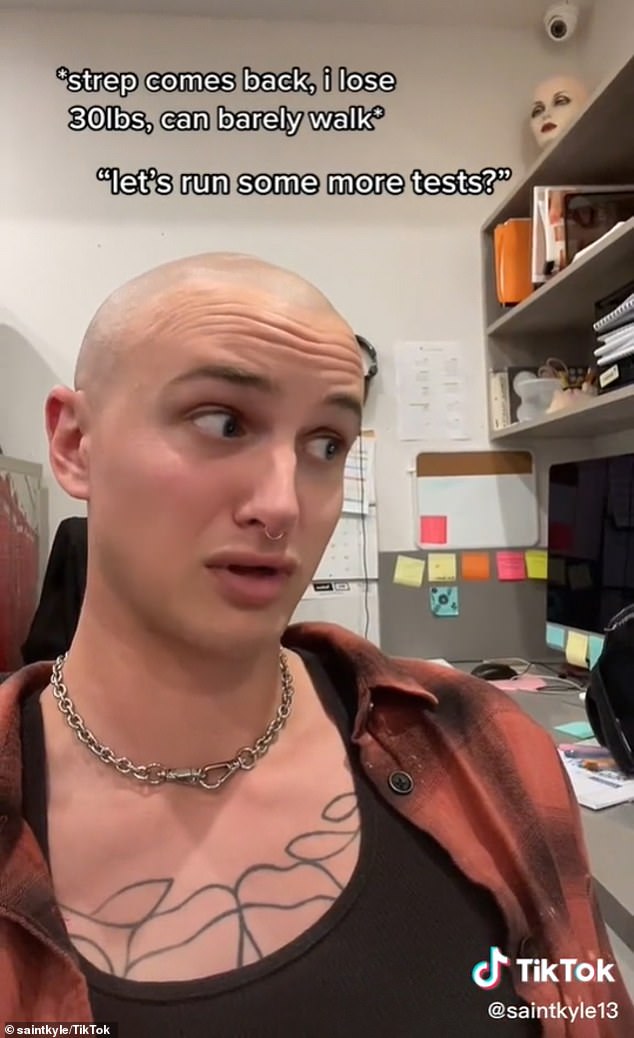 Not only did Kyle’s sore throat return, but they also lost 30 pounds and could barely walk when they went back to see the doctor

HIV, an initialism for human immunodeficiency virus, is a virus that attacks the body’s immune system, according to the Centers for Disease Control and Prevention.

Some people develop flu-like symptoms such as fatigue, fever, chills, night sweats, and a sore throat two to four weeks after infection.

Although there is no cure for the virus, HIV-positive people who undergo antiretroviral therapy (ART) can live long and healthy lives.

HIV medicine helps keep the viral load — the amount of HIV in the blood — low and in some instances undetectable. Someone with an undetectable viral load has effectively no risk of transmitting HIV to a partner through sex.

Kyle’s eye-opening video has been viewed more than 683,000 times, and they explained in the comments that their treatment has been effective. 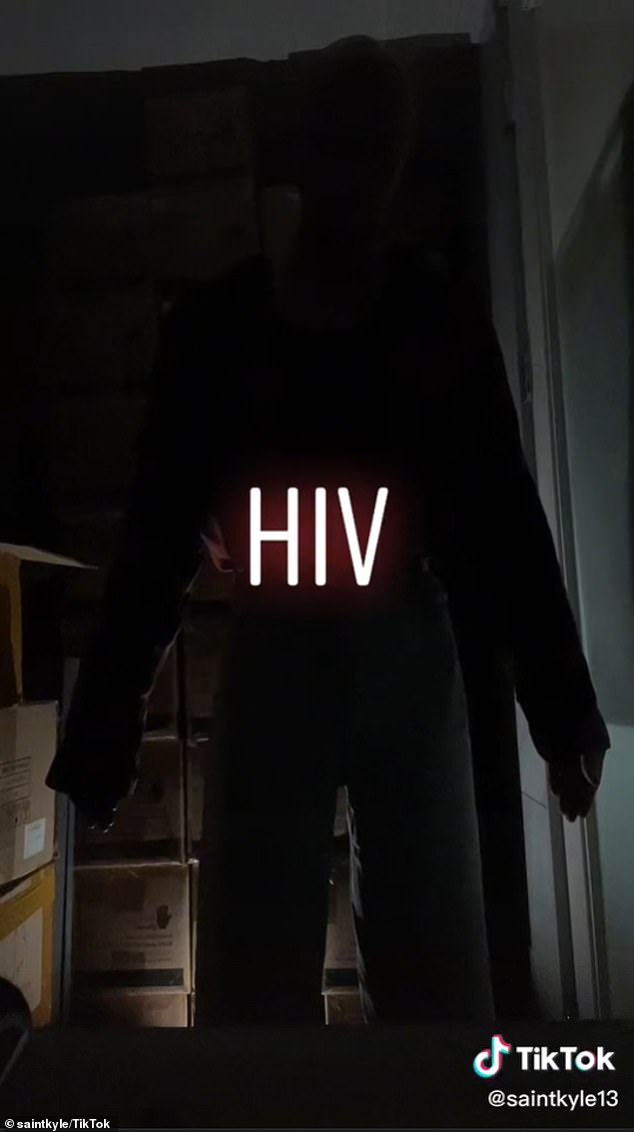 After further testing, they were diagnosed with HIV and put on medication

‘I’ve been undetectable for 3.5 years now and healthier than I’ve ever been,’ they wrote, inspiring other people to share their stories.

‘Yea just got that call.. right in the middle of my final too. I cried for the remainder of the class. I’m definitely not taking the news very well,’ one TikTok user responded.

‘I totally empathize with the initial shock, but your life is not over!’ Kyle insisted. ‘HIV is completely manageable and with meds you’ll be undetectable in no time.’

Many people praised Kyle for sharing their story and educating others, but they also received negative and hateful comments.

‘And that whole time you were spreading that s**t to others. Since you can’t use condoms,’ one person cruelly wrote, prompting Kyle to address the statement in a follow-up video. 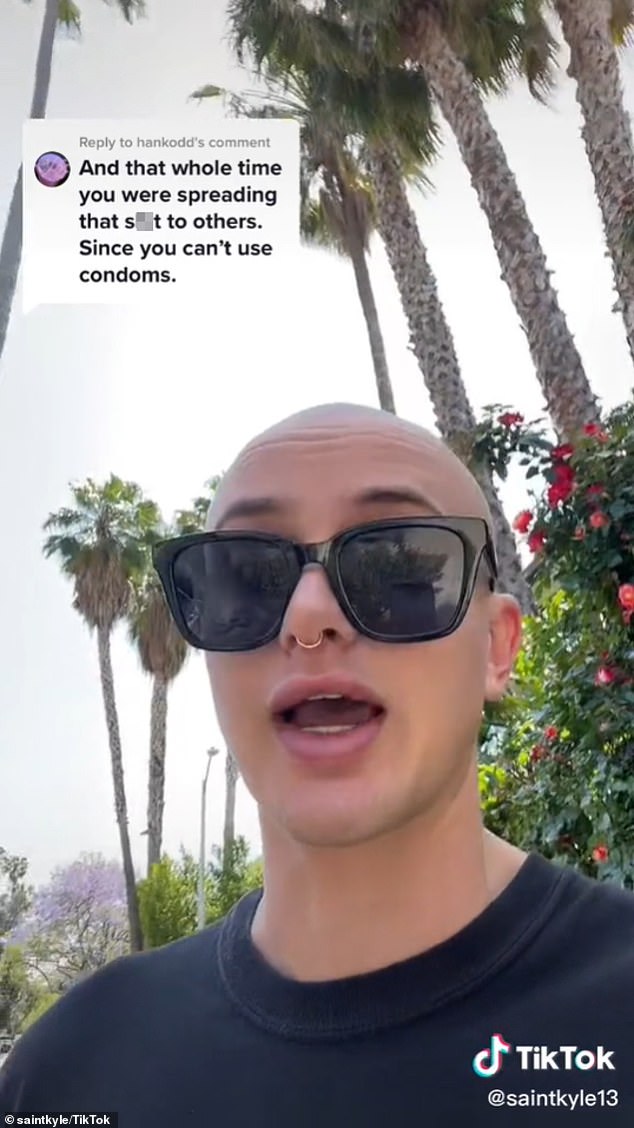 In a follow-up video, Kyle clapped back at an online troll who shamed them for having HIV, saying this is the stigma they are ‘actively trying to fight’ 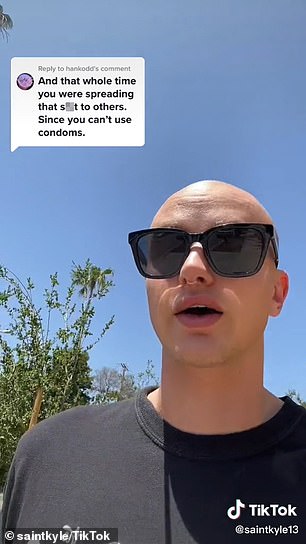 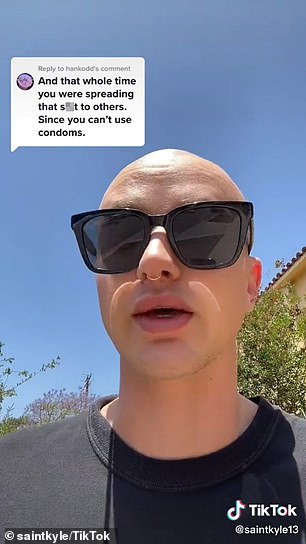 Kyle explained that they had slept with one person one time over the course of three months, and they ended up being positive 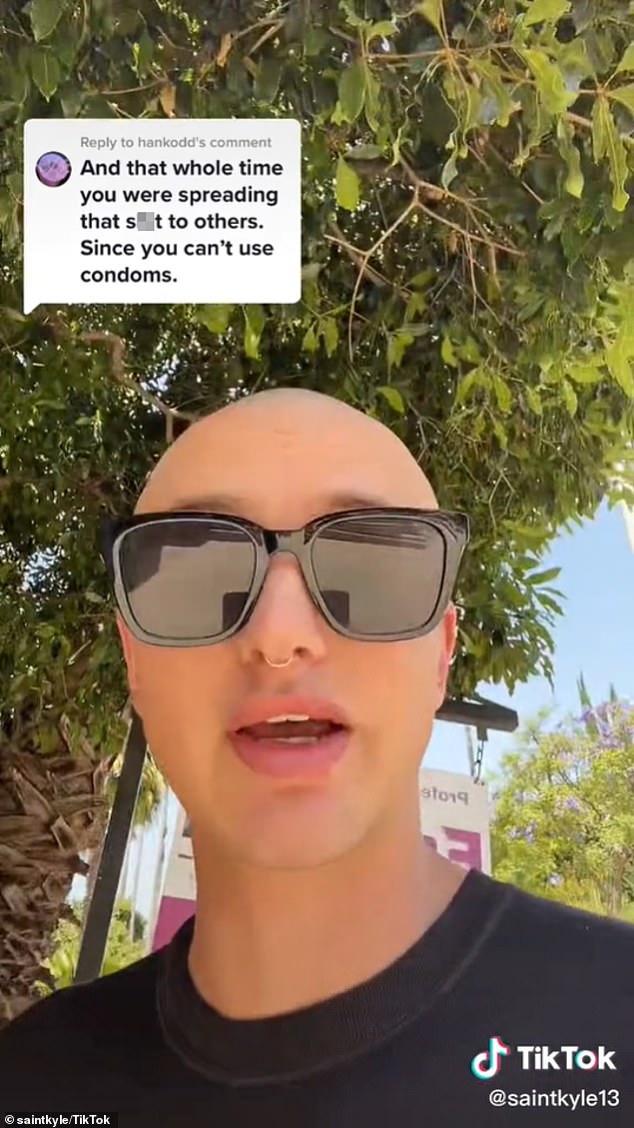 ‘I was getting tested very regularly,’ they noted. ‘I got tested actually right after I slept with them and everything came back negative, which is why I kept going back in for strep’

‘I want to take a moment to address this comment because this is the stigma that I am actively trying to fight by posting the video that I did,’ they said.

‘I want to start it off by saying this is a no slut-shaming zone. Like people can sleep with whoever they want to and however many people they want to as long as they are being safe and getting tested.’

Kyle explained that they had slept with one person one time over the course of three months, and they ended up being positive.

‘I was getting tested very regularly,’ they noted. ‘I got tested actually right after I slept with them and everything came back negative, which is why I kept going back in for strep because that’s what I thought that I had.

In another recent video, Kyle answered a viewer’s question about what it means to be undetectable. They first showed a copy of their blood test from July 2018, right after they got diagnosed. 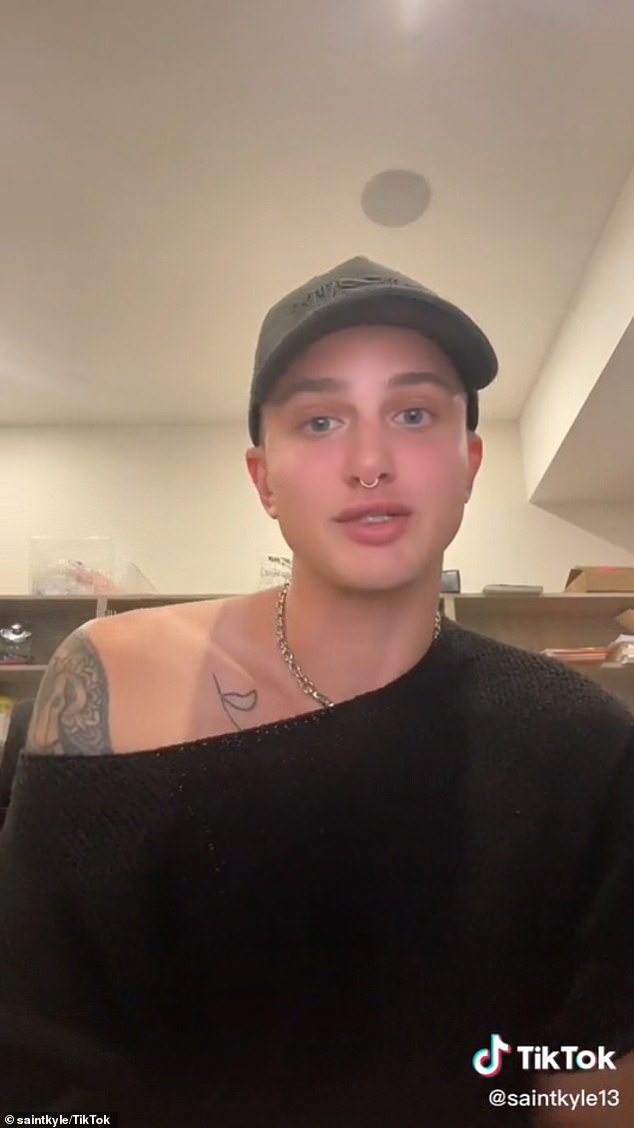 In another recent video, Kyle answered a viewer’s question about what it means for someone with HIV to have an  undetectable viral 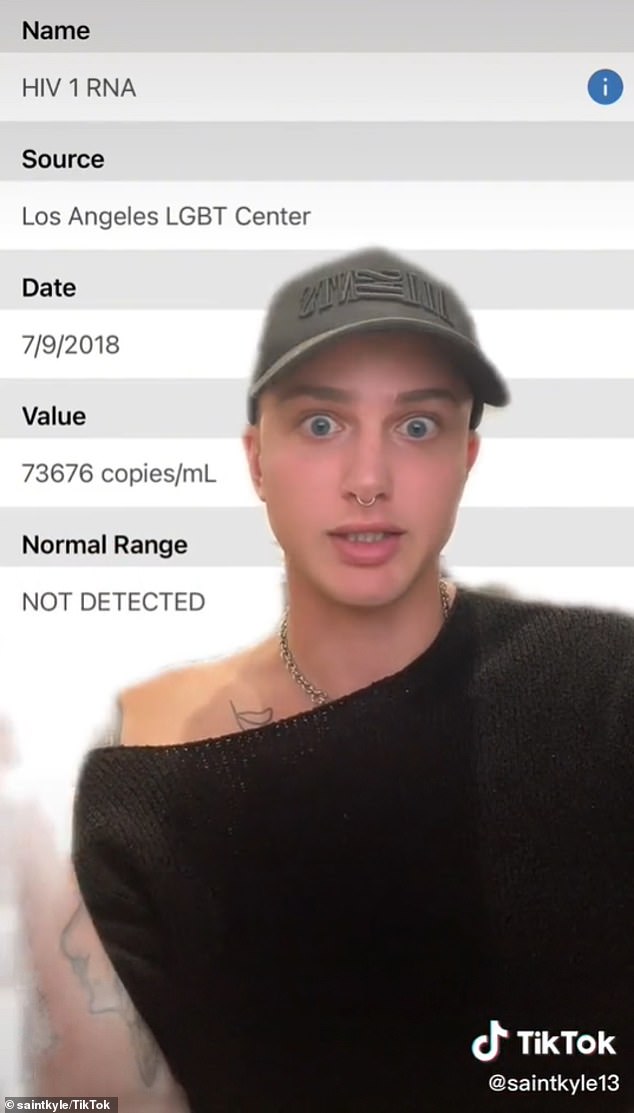 Kyle first showed a copy of their blood test from July 2018, right after they got diagnosed, explaining they had ‘almost 74,000 copies of the HIV virus’ in their system at the time 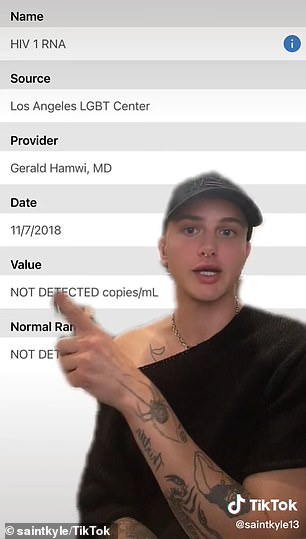 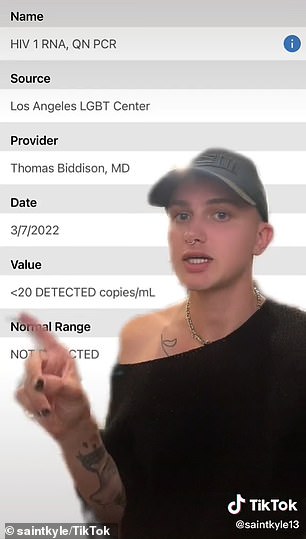 Four months later, Kyle’s blood test showed their viral load was undetectable, which is commonly defined as  having fewer than 20 copies/mL

‘You can see there are almost 74,000 copies of the HIV virus in my system,’ they explained, saying their medication ‘really kicked in’ four months later.

They also pulled out their most recent stats from March to show that their viral load was less than 20 copies/mL, saying that means the same thing as undetectable.

‘Undetectable is now commonly defined as having fewer than 20 copies/mL because a lot of lab tests can now “detect” HIV at that level,’ according to the New York State Department of Health.

‘I have absolutely zero symptoms,’ Kyle added. ‘I feel very healthy day-to-day, and the best thing is there is absolutely no way for me to pass on HIV through sex.’

WHY MODERN MEDS MEAN HIV IS NOT A DEATH SENTENCE

Prior to 1996, HIV was a death sentence. Then, anti-retroviral therapy (ART) was made to suppress the virus. Now, a person can live as long a life as anyone else, despite having HIV.

Drugs were also invented to lower an HIV-negative person’s risk of contracting the virus by 99%.

In recent years, research has shown that ART can suppress HIV to such an extent that it makes the virus untransmittable to sexual partners.

That has spurred a movement to downgrade the crime of infecting a person with HIV: it leaves the victim on life-long, costly medication, but it does not mean certain death.

Here is more about the new life-saving and preventative drugs: