‘What a lad!’ Clip of toddler enjoying a cup of tea goes viral as his mother hits back at critics who say youngsters shouldn’t be given hot drinks

A mother who filmed her toddler enjoying a cup of tea has had a legion of social media users defend her decision after critics warned against giving the hot beverage to young children.

Posting under the handle Leanne King from County Durham took to TikTok, with a clip of her son sipping in a square cup that was once available from McDonald’s.

He appears delighted and when asked what are you drinking, responds: ‘Cup o’ tea’.

The video has been viewed almost two million times, with many commenters defending the mother from critics and admitting they also drank tea from a young age.

A mother, who lives in the UK, has been forced to respond to critics after posting a clip of her toddler drinking tea on TikTok (pictured)

Leanne told Femail that her son doesn’t drink tea regularly, but likes it as an occasional treat.

‘I know my son is cared for, he has absolutely no developmental issues and is definitely not addicted to caffeine or tea,’ she said. ‘He very rarely drank tea but the video was when he was around 1.5 years old.

‘He is now three-years-old and has one approximately once or twice a month.

‘There are plenty other things which I could have given him but I think no matter what, someone will comment on anything you do online.’

Among the critics was one, who wrote: ‘Tea is just as bad as coffee it’s filled with caffeine which is bad for babies’

Another said: ‘I don’t think babes should drink tea of coffee’

The NHS website states that ‘hot drinks like tea and coffee contain caffeine and are not suitable for babies or young children. There’s also a risk that hot drinks can cause scalding.’ 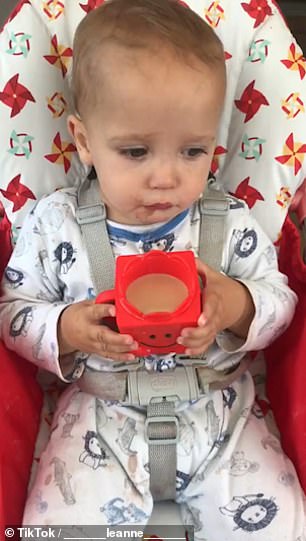 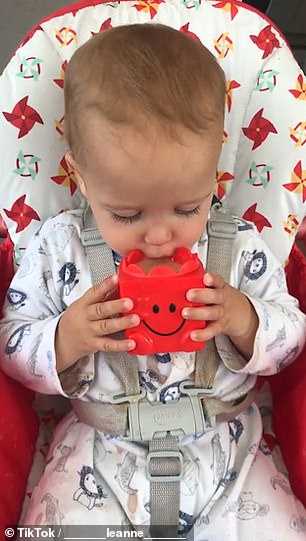 One critic warned tea is filled with caffeine, while another claimed black tea interferes with absorption of iron

However, some social media users have argued they grew up drinking tea without having any issues and gushed about it being a tradition for Brits.

‘My mum used to put tea in my bottle when I was a baby,’ one wrote.

Another said: ‘I hope anyone complaining about this little man having a cuppa tea never take there kids to a fast food place of give them fruit shoots’

A third joked: ‘Never seen anything so British! I love it… can’t beat a good cuppa tea’

Another added: ‘What a lad. There’s nothing wrong with him having a brew… he’s enjoying it, that’s all that matters.’

A flood of comments argued they grew up drinking tea, with one joking that he should also be given biscuits