A passenger has slammed a plane’s crew after she caught them posing for a photo-shoot on the tarmac while her flight was delayed for three hours.

The airport staff were busted on Tuesday by a woman sitting in a terminal, as she was waiting for her Air Canada flight to board.

TikTok user @sugywitdahoodie filmed the staff through a window overlooking the runway, as they were taking photos around the plane. 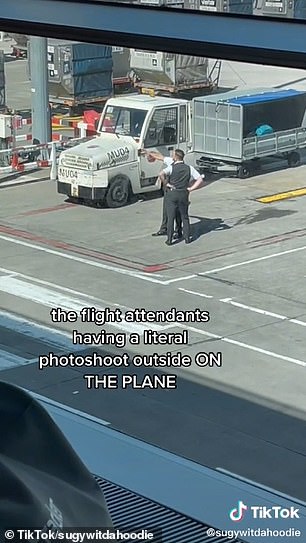 A passenger has slammed an Air Canada flight crew after she caught them posing for a photo-shoot on the tarmac while her plane was delayed for three hours. The airport staff were busted on Tuesday by a woman sitting in a terminal, as she was waiting for her flight to board

‘Everyone on our flight wondering why we’re 3+ hours delayed,’ a caption on the video – which has been viewed more than 300,000 times – says. ‘The flight attendants are having a literal photoshoot outside, ON THE PLANE.’

The footage showed one flight attendant sitting on the plane’s engine, as baggage handlers wearing high-visibility snapped their photo.

The airline worker – wearing a typical flight attendant’s uniform – appeared to be enjoying the attention, striking poses for the cameras.

At the same time, other flight attendants could be seen taking selfies on the tarmac, as the airplane remained stationary. The woman filming panned the camera around to show dozens of other passengers waiting to board, looking impatient.

TikTok users commenting on the video were divided over the staff’s antics, while others shared their own stories of being delayed when flying with AirCanada.

‘My Air Canada flight was delayed for 2 hours because the crew left their hotel late and were stuck in traffic,’ one wrote under @sugywitdahoodie’s video.

Another suggested that the staff were ‘quiet quitting’ – a phrase growing increasingly popular that describes workers doing as little as possible at their jobs.

Some, however, jumped to the defense of the airline workers. 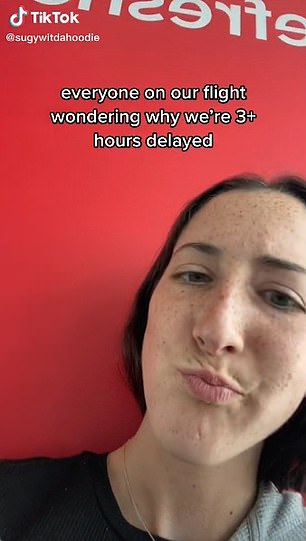 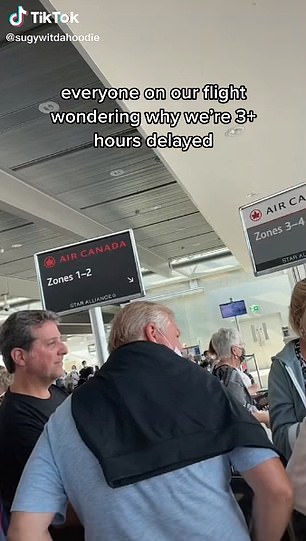 TikTok user @sugywitdahoodie filmed the staff through a window overlooking the runway, and as they were taking photos around the plane. The woman filming panned the camera around to show dozens of other passengers waiting to board, looking impatient

‘Not so fun fact: flight attendants are not paid on the ground, boarding, during delays, at the airport, etc so might as well do a photoshoot,’ one said. Another added: ‘To be fair they’re probably waiting and trying to pass the time just like you.’

‘They’re not paid until those doors shut so let them have fun at least – they got to do something whilst they wait,’ a third said.

The summer travel season ended on a busy note as more than 8.7 million people passed through security in the last four days, topping the Labor Day weekend of 2019. That is a first for a holiday weekend, the Transportation Security Administration said Tuesday. The busiest day was Friday, when TSA screened 2.48 million travelers.

However, thousands of passengers across the country faced delays at airports, which have faced chaos this summer. On Saturday alone, more than 3,600 flights were delayed in or out of the United States and 145 were cancelled.

It was not immediately clear whether the crew seen in the footage were the same that would have been flying with the passenger who caught them on video, or if they were employees of Air Canada.