Christina ‘Tinx’ Najjar has come under fire for controversial tweets that have resurfaced online, including body-shaming posts in which she called Kim Kardashian and Lindsay Lohan ‘fat.’

The 31-year-old influencer, who has branded herself as being TikTok’s ‘big sister,’ has also faced backlash for liking and retweeting posts espousing conservative views when fans were under the impression she was more progressive.

Tinx has issued a public apology for her ‘truly nasty, mean, horrible tweets,’ which were originally posted between 2012 and 2020, before she shot to fame, saying she was in her early 20s and was ‘deeply, deeply insecure.’

TikTok star Christina ‘Tinx’ Najjar, 31, has faced backlash for a slew of resurfaced tweets that she posted between 2012 and 2020, before she was famous 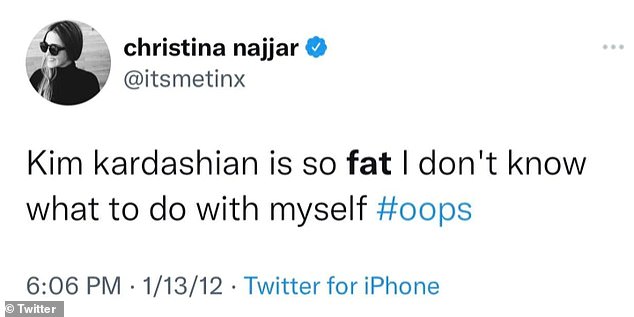 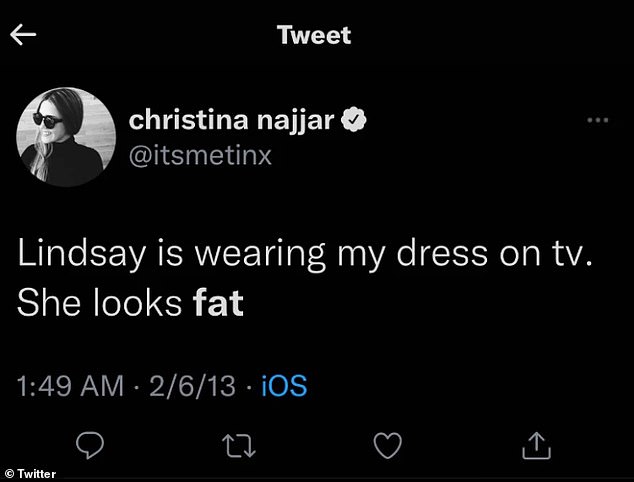 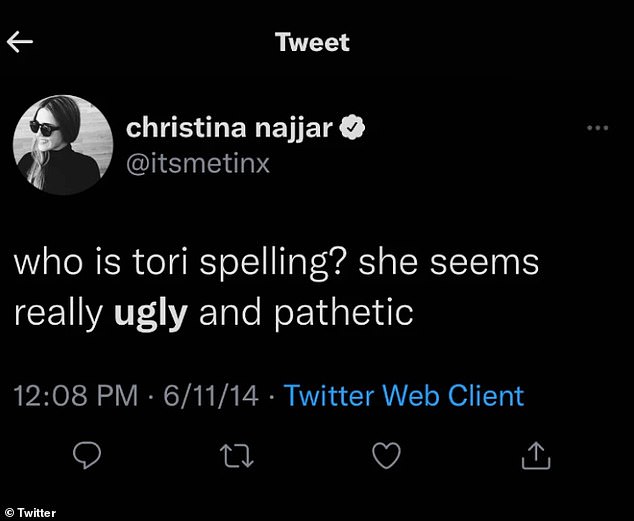 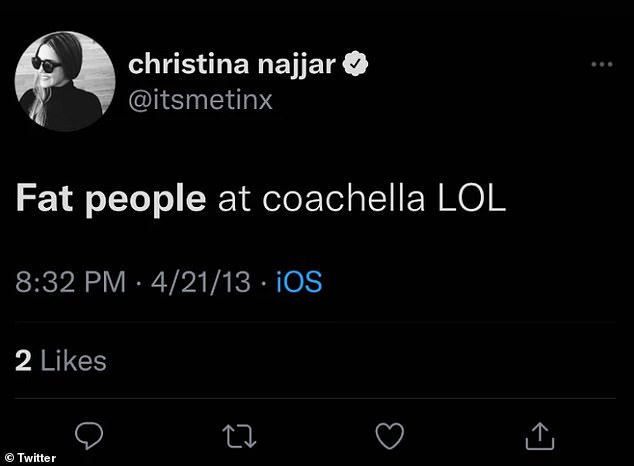 The influencer, who has branded herself as being TikTok’s ‘big sister,’ called Kardashian and Lindsay Lohan ‘fat’ and Tori Spelling ‘pathetic’ in past posts

A collection of her old tweets were posted last week on Reddit in the subreddit r/tinxsnark. Journalist Sophie Ross drew more attention to them in her recent Substack newsletter titled ‘We Need to Talk About Tinx’s Old Tweets.’

Meanwhile, Katie Roble did a deep dive into Tinx’s past posts and why they are problematic in a series of TikTok videos after reading Ross’ newsletter.

‘Clearly from this article you can see that “Tinx” is fat phobic, transphobic, xenophobic, and a republican …. Online she pretends to be a liberal,’ she captioned her first clip on the topic.

Tinx, who has a combined total of nearly two million followers on TikTok and Instagram, bashed a number of celebrities in her early tweets, including Kardashian, Lohan, and Tori Spelling. 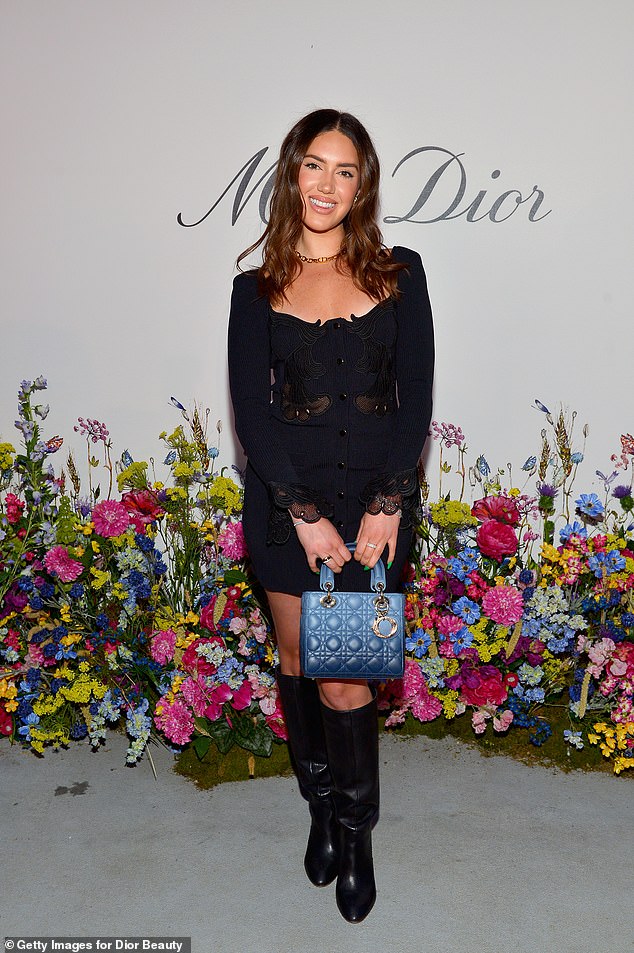 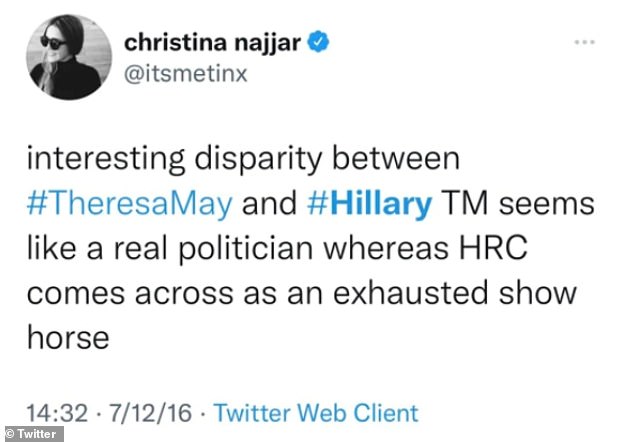 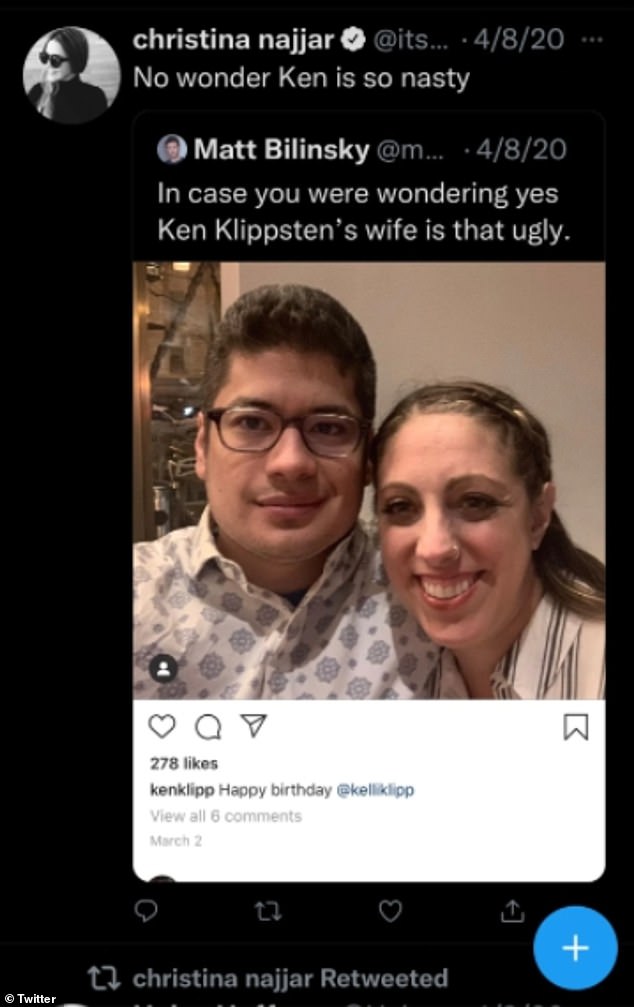 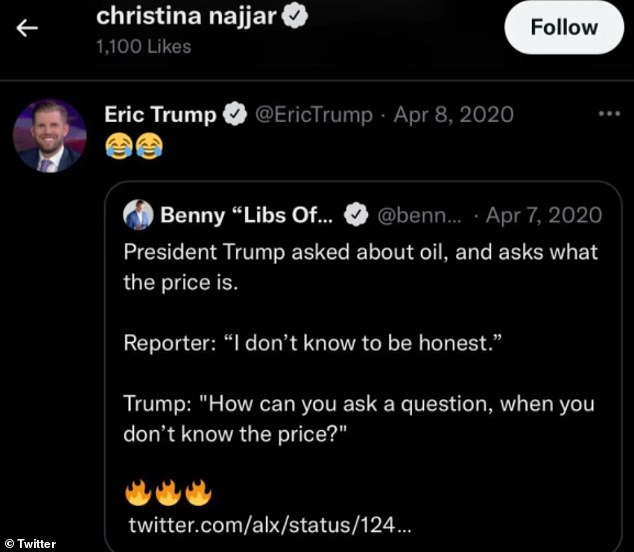 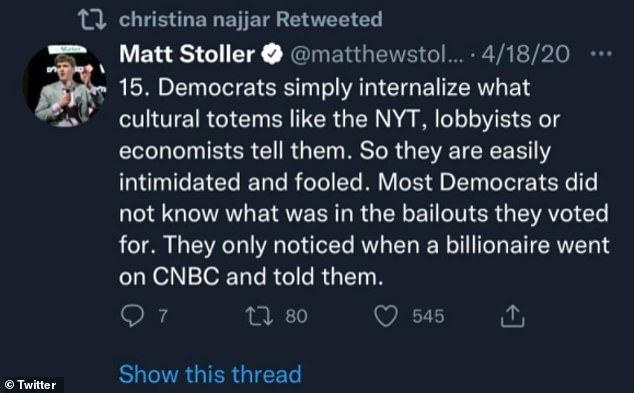 ‘Kim Kardashian is so fat I don’t know what to with myself #oops,’ she tweeted in 2012. The next year, she wrote: ‘Lindsay is wearing my dress on TV. She looks fat.’

Another tweet from 2013 said: ‘Fat people at Coachella LOL.’

‘Who is Tori Spelling?’ she asked in 2014. ‘She seems really ugly and pathetic.’

Critics also accused Tinx of misgendering Caitlyn Jenner after she came out as a transgender woman in an interview with ABC’s Diane Sawyer in April 2015.

However, Jenner didn’t announce her name change or start using she/her pronouns until July of that year. Many people, including her family members, referred to her as Bruce and used he/his pronouns when showing their support for her after the interview. 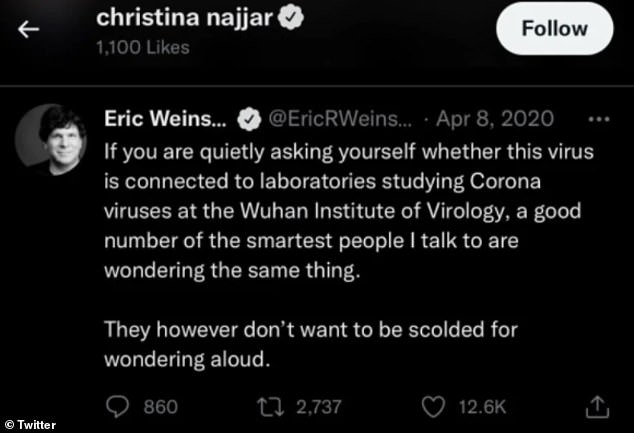 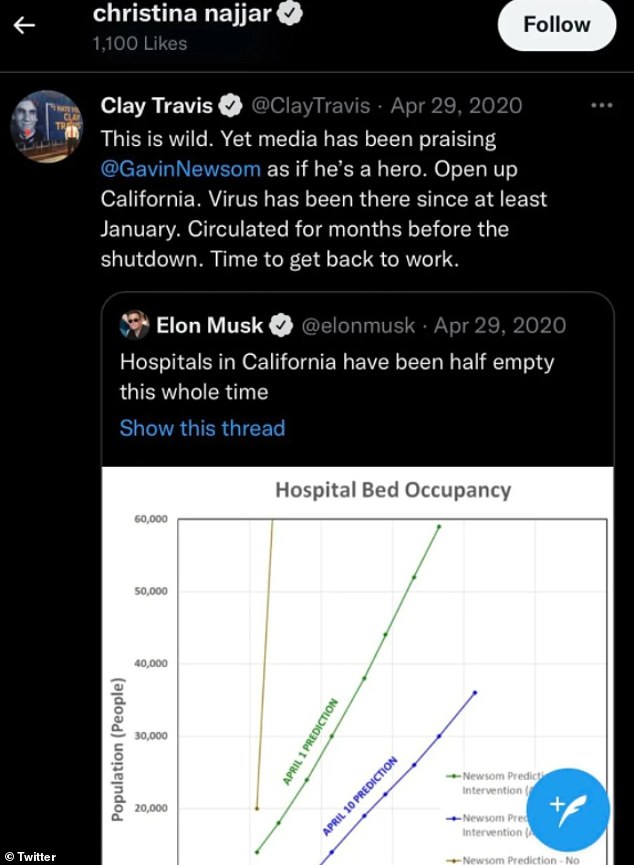 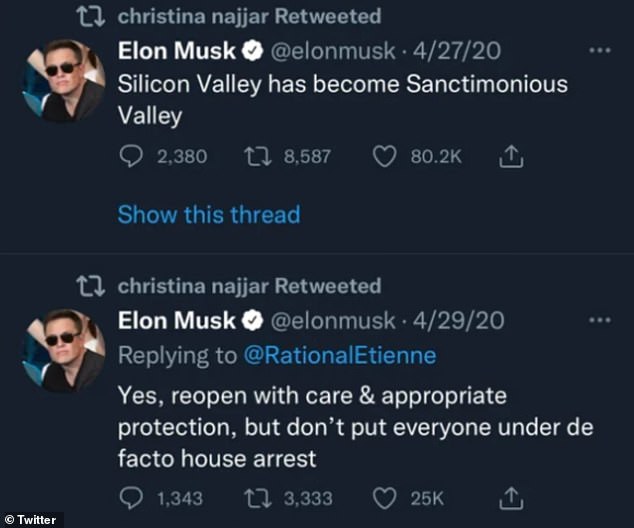 The influencer has been branded xenophobic for the posts about China that she liked and retweeted during the pandemic. In April 2020, she rallied against the lockdowns in California

‘And he says Yeah I’m a Republican is that bad?! LOVE #BruceJenner. he is awesome and a hero!!’ she tweeted at the time. ‘#BruceJenner will be written about in textbooks as a [crusader] and leader in the equality textbooks. Truly admire his bravery in himself.’

When asked if she made fun of Caitlyn Jenner in an ‘Ask Me Anything’ session on Instagram Monday, she responded: ‘Unequivocally no.’

‘We were not introduced to Caitlyn by her name until the Vanity Fair cover which came out in June.’ 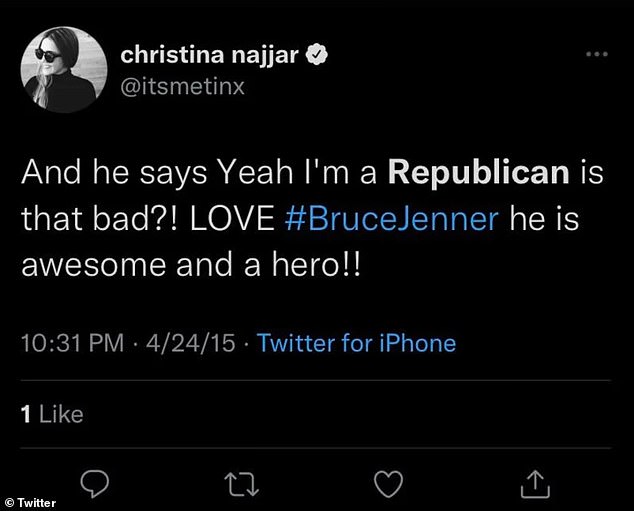 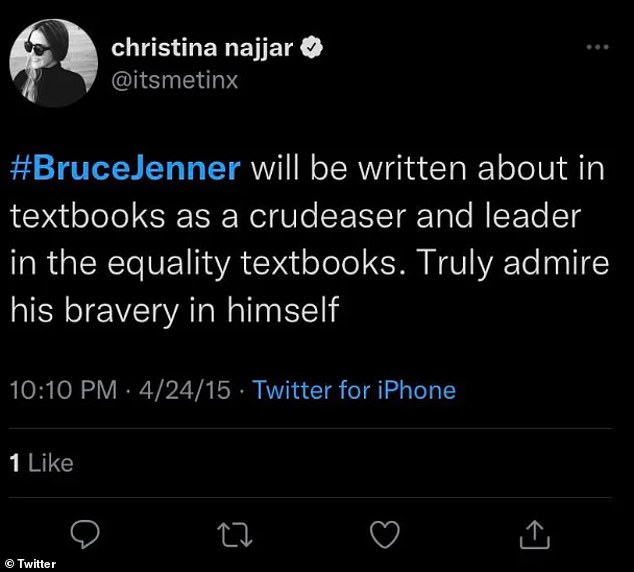 Tinx was accused of misgendering Caitlyn Jenner in 2015, but her tweets were shared before she changed her name and started using she/her pronouns 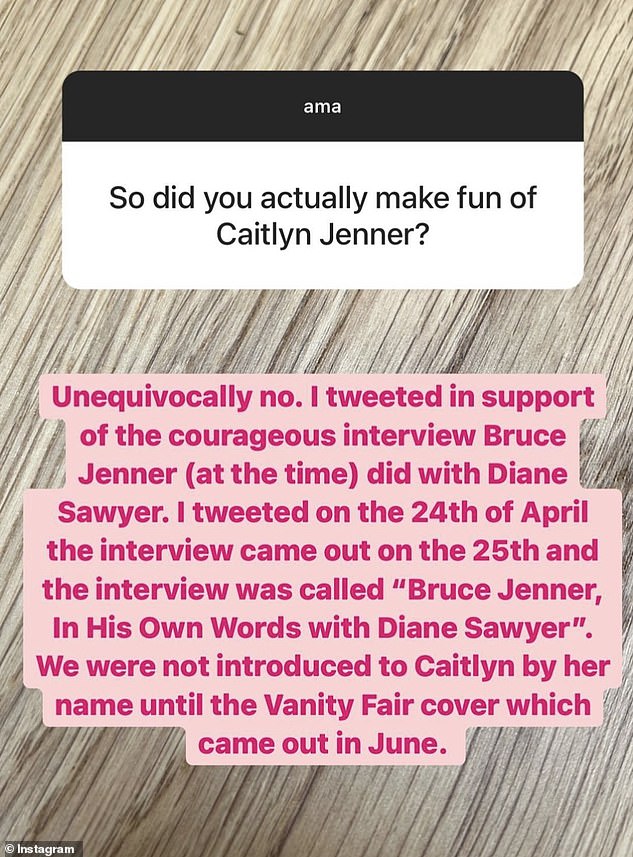 Tinx’s political affiliations have been called into question after her old tweets revealed that she seems to be more conservative than fans have been led to believe.

She took aim at Democratic nominee Hillary Clinton during the 2016 election, tweeting: ”Interesting disparity between #TheresaMay and #Hillary TM seems like a real politician whereas HRC comes across as an exhausted show horse.’

Tinx, who was born in Washington, D.C. and raised in London, retweeted and liked messages that showed support for conservative British Prime Minister Boris Johnson and promoted xenophobia against Chinese people at the start of the COVID-19 pandemic.

She also liked a post from Donald Trump’s son Eric Trump and railed against California’s lockdown measures in April 2020. That summer, she shot to overnight fame for her comical ‘rich mom starter pack’ videos. 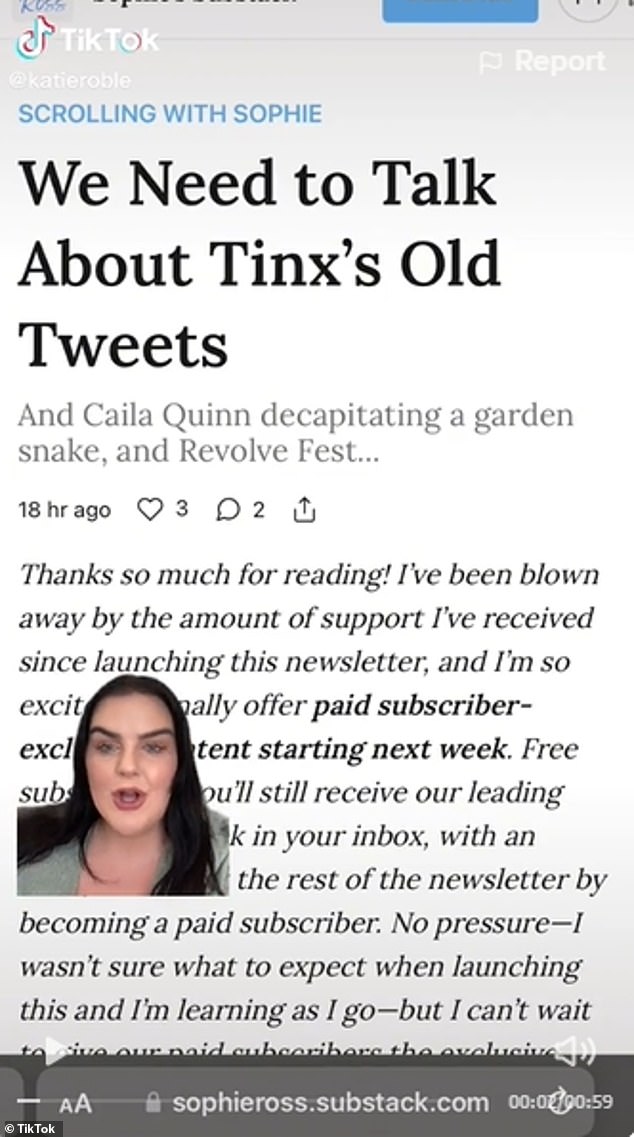 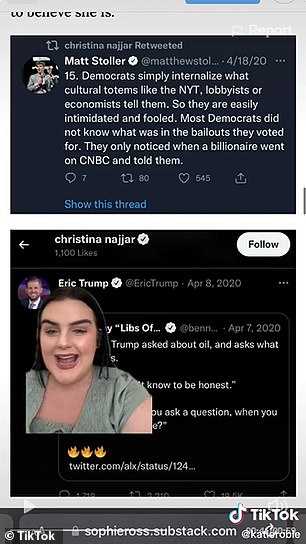 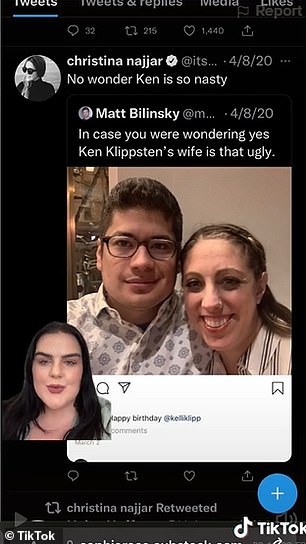 ‘It’s certainly interesting that Tinx appeared to be more outspoken about her right-leaning views before becoming famous, and seemed to have created a more progressive, inclusive alter ego of sorts in order to appease the masses. Or… maybe she’s just changed?’ Ross wrote in her newsletter.

‘What’s even more interesting, to me, is the misogyny and body-shaming. I understand that 2013ish was a “different time,” but… it’s difficult to defend or rationalize ever saying those things.’

Former fans have slammed the social media star for building a brand around being a role model and embracing body positivity while accusing her of being a ‘mean girl.’

Tinx’s highly-rated podcast, ‘It’s Me, Tinx,’ has received an onslaught of one-star reviews in recent days due to her unseemly tweets.

‘I’ve been a Tinx fan since she came on the TikTok scene and really believed her to be a kind hearted and empathetic woman,’ one person wrote. ‘I’m not someone who has ever gravitated towards influencers but there was something truly authentic about her. 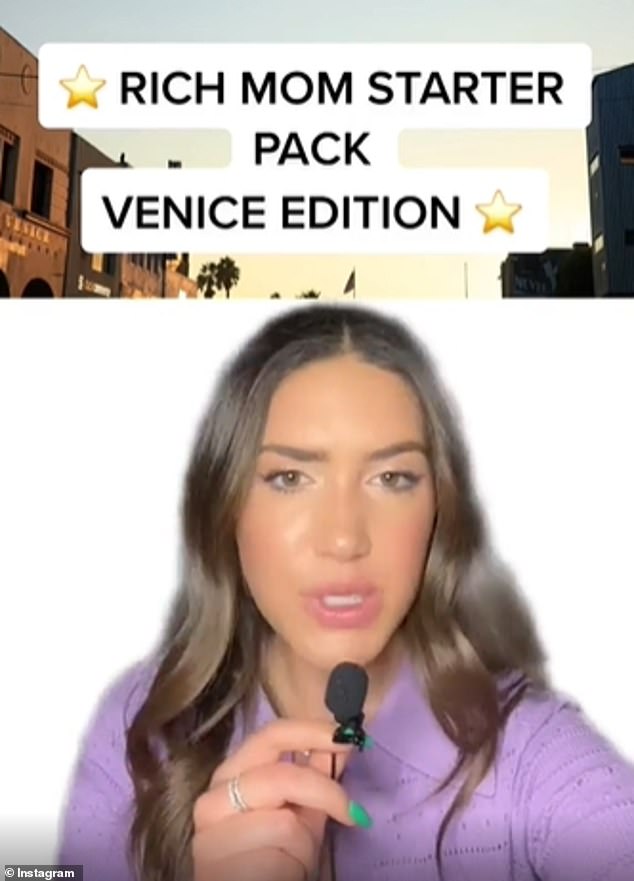 In the summer of 2020, Tinx shot to overnight fame thanks to her comical ‘rich mom starter pack’ videos. A recent one poked fun at moms in Venice, California (pictured) 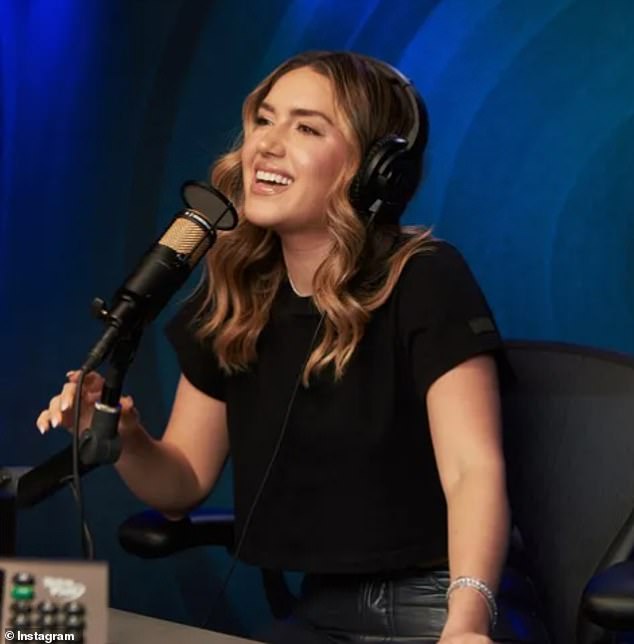 Tinx has a combined total of nearly two million followers on TikTok and Instagram, as well as her own podcast, ‘It’s Me Tinx’ 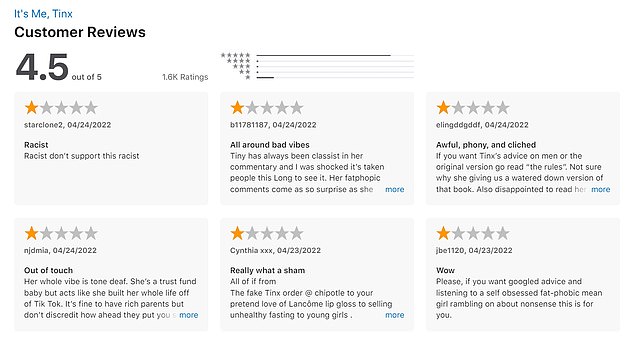 ‘That said, I’ve recently realized this image is a total facade in order to seem more likable (read: marketable). Her resurfaced tweets are so disappointing, some of which were as recent as 2020.’

Someone else commented: ‘I’m super disappointed (and shocked!) to read Tinx’s tweets where she calls other women fat and ugly, not to mention the fact that she’s pro-Trump and has apparently hiding that since she went viral on TikTok!

‘I encourage people to read Sophie Ross’s Substack where she shows a TON of problematic content from TikTok’s “big sister.” Thank god my big sister wasn’t as horrible as Tinx is to other women.’

Tinx took to Instagram on Sunday to post a public apology, which focused on her body-shaming tweets, saying she is ‘beyond embarrassed’ and wants ‘to take accountability.’

‘About 10 years ago, I sent some truly nasty, mean, horrible tweets. I called people that I had never met fat, pathetic, and ugly,’ she wrote. ‘I even called Kim Kardashian fat, which is ironic considering she is my number one idol and person I look up to. 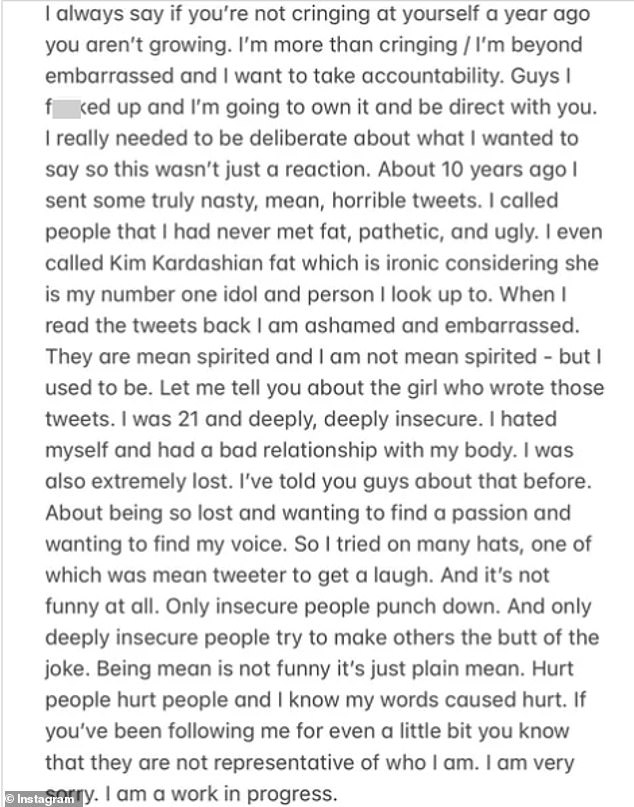 Tinx issued a public apology on Instagram on Sunday for her ‘truly nasty, mean, horrible tweets,’ saying she was in her 20s and was ‘deeply, deeply insecure’ 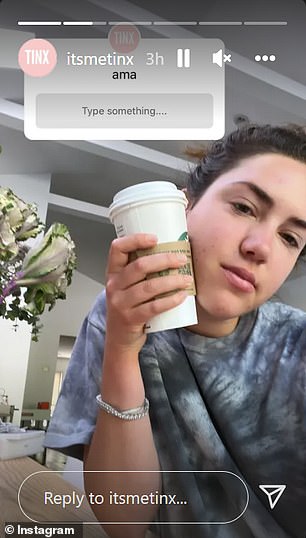 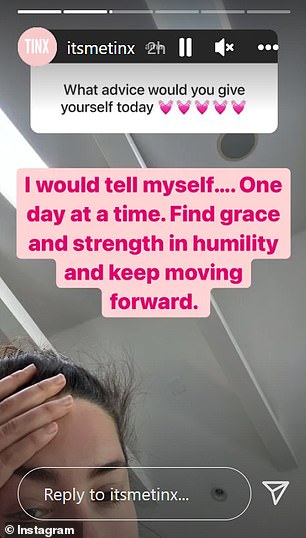 She hosted an ‘AMA’ the next day, saying she would tell herself to ‘find grace and strength in humility and keep moving forward’ 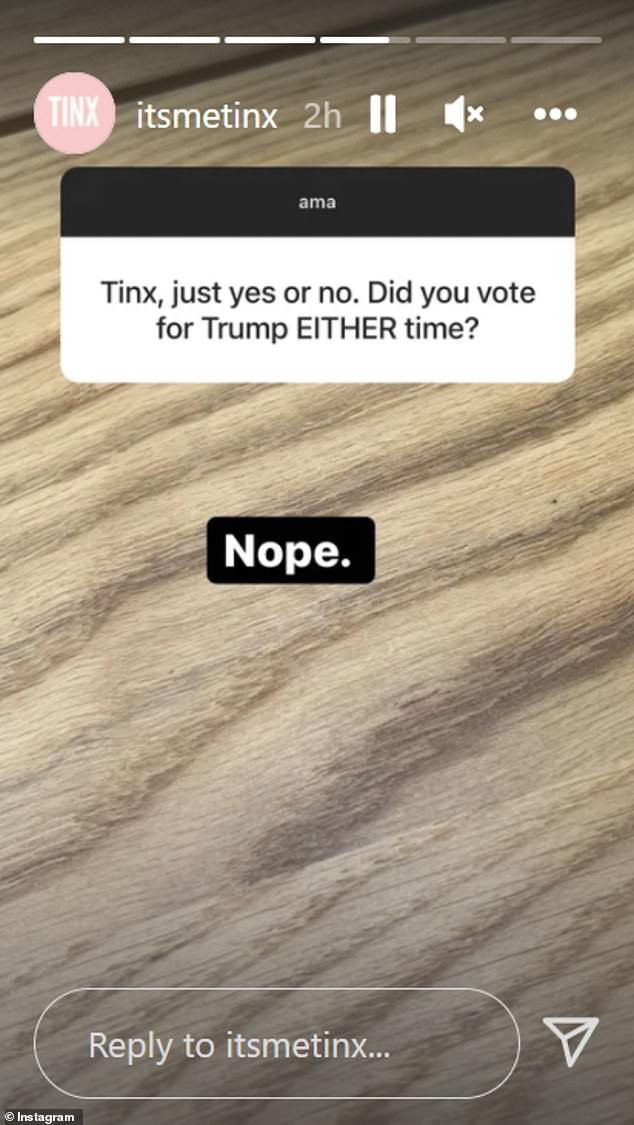 The social media star didn’t address her political views, but she insisted she didn’t vote for Donald Trump in the 2016 or 2020 elections

‘When I read the tweets back, I am ashamed and embarrassed. They are mean spirited, and I am not mean-spirited—but I used to be,’ she continued. ‘Let me tell you about the girl who wrote those tweets. I was 21 and deeply, deeply insecure. I hated myself and had a bad relationship with my body. I was also extremely lost.’

Tinx explained that she was struggling to find her voice at the time, which led her to try being a ‘mean tweeter’ to get a laugh, but she now realizes that ‘it’s not funny at all.’

‘If you’ve been following me for even a little bit you know that they are not representative of who I am. I am very sorry. I am a work in progress,’ she concluded.

Tinx didn’t address her political views, but in her AMA the following day she was asked if she voted for Trump in either the 2016 or the 2020 presidential elections.