Father of two-year-old twins Tim Vincent, 47, tells Loose Women that new dads can often be seen like ‘spare parts’ – and admits he struggled with HIS post-baby weight

The Welshman, who appeared on the popular BBC’s children’s programme before going on to host several Miss World and a Miss USA contest, is a dad of two-year-old twins Jasper and Felix.

Tim, who is sharing the ups and downs of fatherhood in his radio series ‘The Likely Dads’, also admitted that he struggled with his excess post-baby weight.

‘That first 6-12 months you can feel a little bit separated from the events,’ he explained. ‘Somebody said to me, which I’m not sure is absolutely true, but for a man it takes a bit longer to bond with children because the child doesn’t have any recognition of you.

‘The mum has 90 percent of the time carried the baby once it’s arrived, so it takes us a little bit of time to bond on the same level.’ 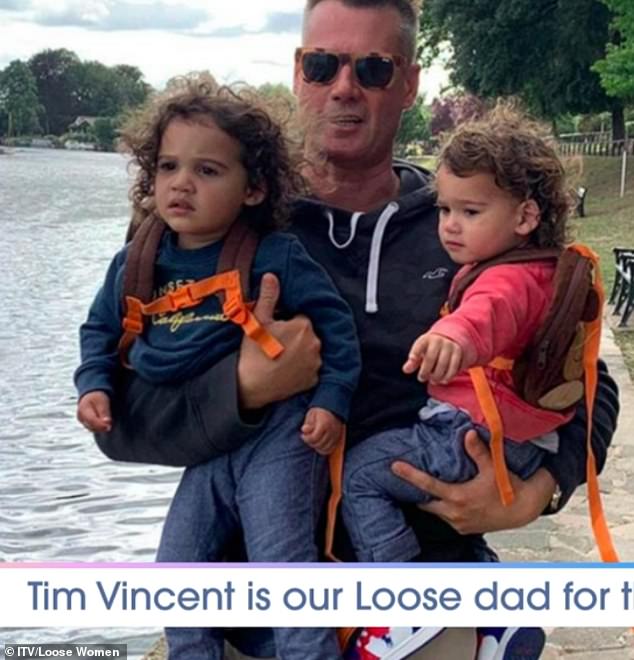 During the show, Tim explained how dads can often be seen like spare parts after the birth of their children. Pictured, with his two-year-old twins

During the show, TV presenter Nadia Sawalha told how she was interested to read that at 45, Tim thought it was never going to happen to him.

‘I suppose if I’m honest, I never think about men having babies and having that biological clock in that way,’ she revealed.

Tim replied: ‘Oh absolutely – completely. It’s not a big job really to say the biggest killer of men in I think under 35 is suicide because we bottle things up. Men can be very broody. I was really thinking, “I’m a bit of a catch, why hasn’t it happened to me?”‘

Stacey Solomon went on to discuss Tim’s previous comments about feeling like a spare part who couldn’t really be a big part of his children’s life at the beginning. 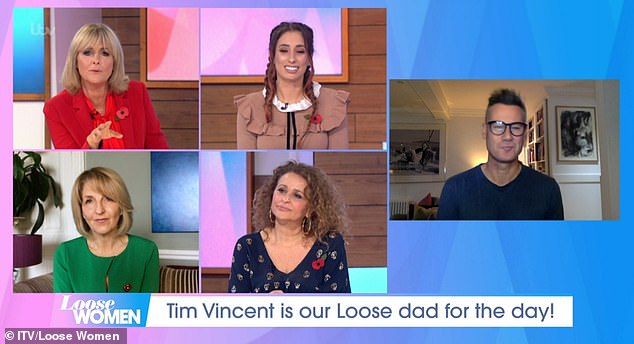 During the show, TV presenter Nadia Sawalha (pictured left, with the other presenters) told how she was interested to read that at 45, Tim (right) thought it was never going to happen to him 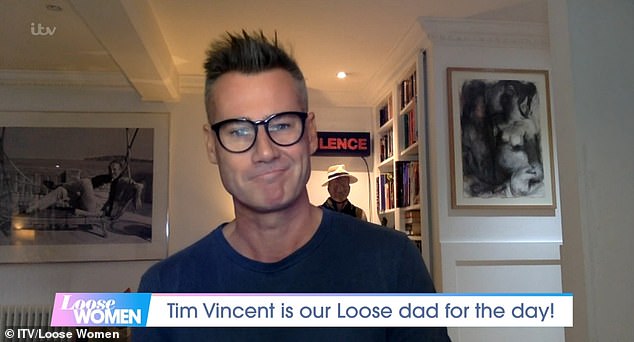 ‘Most men at the beginning don’t know what they’re doing,’ he explained. ‘The woman is understandably exhausted and having to juggle lots if plates.

‘We’re just like a bad magician running around and picking up the wrong things, and trying to batch cook and forgetting where the kitchen is, and not being able to operate the microwave. Our essence of wanting to help out is perfect, but we don’t necessarily get it right.’

Speaking on what makes him panic, Tim added: ‘I think it’s a little bit under-spoken because dads are expected to just get on with it, but we’re constantly panicking.

‘We might keep it together but underneath it all, I’ve just been to the park with the two boys, and as Jane just mentioned, as soon as you put them down, one will go in one direction and another in the other.

‘You have to very quickly work out which one will be in most danger, hope your hips still work, and sprint after one with the other under your arm.’

Tim went on to discuss how he struggled to lose excess weight after having a baby.

‘It’s down to you guys actually,’ he explained. ‘I was on your show about a year ago, thought I was svelte-looking ready to go up for the next James audition and thought I needed to lose a little bit.

‘I lost a little bit around the side because I tried to stop drinking in the week and the twins haven’t stopped running around.’