Time to give annuities another chance? Rates soar 50% this year

Funding retirement: Buying an annuity provides a guaranteed income until you die, but until recently they have been regarded as bad value

Annuity rates are at a 13-year high which is ‘turbo-boosting’ the amount of guaranteed income pensioners can receive in retirement, say financial experts.

For £100,000, a healthy 65-year-old can buy a single life annuity with no inflation protection at a rate of around 7 per cent, or an income of just over £7,000 a year, according to industry average data.

The recent Tory mini-Budget has raised expectations of more interest rate increases, which has pushed up yields from UK government bonds and led to better annuity deals from providers.

The dilemma for people considering an annuity is that rates could easily head even higher, and buying now could lock you into a lower income than you could get in just a few months’ time.

But pension experts point out you are under no obligation to annuitise your pension in one go, and you can phase your purchases, and use annuities in combination with an invested drawdown pot.

Buying an annuity provides a guaranteed income until you die, but until recently they have been regarded as bad value for money and restrictive. Pension freedom reforms in 2015 have prompted most savers to keep their funds invested and live off withdrawals instead.

We look at the impact of recent financial market developments on annuity rates, and what you should weigh up when deciding if now is the time to buy.

Hargreaves Lansdown uses an online annuity quote tool to compare the rates available from the UK’s leading providers and produce these industry average figures. These quotes were generated on 29 September.

Why are annuity rates soaring?

Annuity rates recovered after years in the doldrums because UK Government bonds, known as gilts, are used to produce annuity income.

And the Bank of England’s run of interest rate hikes to 2.25 per cent – with more widely anticipated to counter inflation – has improved the yield from gilts.

Sales of annuities had already risen 13 per cent to around 68,500 in the year to this April, according to figures from the Financial Conduct Authority.

‘This has turbo-boosted the annual incomes that retirees can get from lifetime and fixed-term annuities.

‘Annuities have become a much more attractive option, particularly for those who value the security of the guaranteed income they offer.’

Now, a 65-year-old buying a level (not inflation-linked) single life annuity would only have to live for just over 15 years to recoup their annuity outlay, he points out.

Nick Flynn, retirement income director at Canada Life, likewise notes that this ‘break even’ point, where you would receive your original pension back through income, has fallen from 22 years to 15 years in the past nine months.

‘It’s has been a record-breaking year for annuity rates, with incomes at a level we haven’t seen for over a decade,’ he says.

‘I’d need to look back to before the banking crisis of 2008/9 to see annuity rates at a similar level as today.

‘In the current economic climate, where else could you receive nigh on 7 per cent risk free income in retirement? That is how strong annuity rates are right now which is why they are worth more than just a second glance.’

Helen Morrissey, senior pensions and retirement analyst at Hargreaves Lansdown, says: ‘If we see further interest rate rises, then we could see these rates rise still further in the coming months.

‘Once an annuity is bought it cannot be unwound and this can concern would-be annuitants who don’t want to lock into a rate that then subsequently rises.’

Morrissey stresses: ‘It is important to shop around to make sure you get the best deal as different providers will offer different rates.’ 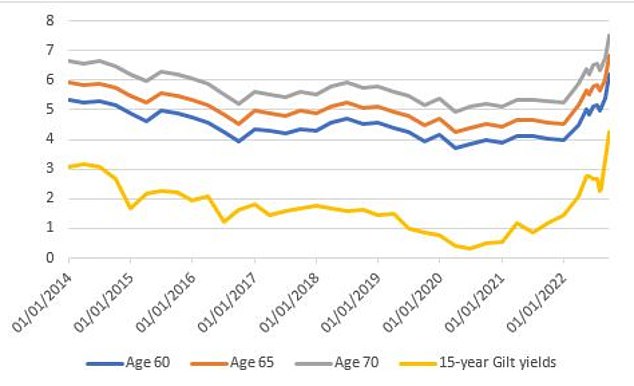 Annuity rates on 30 September for £100,000 at age 65, 10 year guarantee (protects against loss of all or most of your money if you die shortly after purchase), single life, not inflation linked. Source: Canada Life

What about investing your pension pot via drawdown?

An equities bull market in recent years has made drawdown the more attractive strategy to generate retirement income, and in 2020-21 only 10 per cent of pension funds were used to buy an annuity, says Smith.

‘Unappealing annuity rates persisted until the start of this year when the Bank of England’s rate-hiking agenda started to boost bond yields.

‘At the same time, pension savers have begun to see the rockier side of drawdown as market volatility has hit fund values and made taking an income from investments without running down their pot a tricky business.

‘On the flipside, some of those looking at retirement now might not want to crystallise losses by selling a lot of investments to raise the cash for an annuity, leaving them between a rock and a hard place.

‘All of which goes to show the wisdom of gradually building up a cash or cash-equivalent reserve in one’s pension portfolio well before retirement becomes a live issue.’

Flynn says: ‘With the right guarantees and value protection options, annuities can now give drawdown a good run for their money through the benefits available.

‘Clients planning their retirements or looking to de-risk their investment portfolios should take another look at annuities.’

Flynn suggests looking at using annuities alongside drawdown, rather than viewing them in isolation or having all your eggs in one basket.

‘Phasing annuity purchases throughout retirement can not only de-risk your retirement journey, but you can also benefit from better annuity rates as you get older. With the right value protection, you can also ensure your wealth is protected and can be passed to loved ones.’

Morrissey says you are under no obligation to annuitise your pension in one go, and doing it in stages to secure income to meet your needs as you go along can be a good approach.

‘It also gives you the chance to keep the remainder of your pension invested for longer where it can hopefully benefit from investment growth.’

What should you bear in mind when buying an annuity

– You might be able to get an ‘enhanced’ rate if you wait to buy an annuity until you are older and your health has worsened.

– You can think again about your invest-and-drawdown strategy, and buy an annuity in tandem or as a replacement source of income later, but you can’t get out of an annuity once it is purchased.

– If you are healthy the best rates are on single life, no inflation link ‘level’ annuities, but the current cost of living crisis highlights how important it is to get some protection against rising prices.

– If you buy a single not a joint life annuity there will be nothing for your spouse if you die first, so consider what they will have to live on and discuss it with them before making a decision.

Many widows and widowers discover their partner’s annuity choice has left them with no income after their bereavement, forcing them to live on meagre state benefits.

– Consider buying an annuity with a ‘guarantee period’, which protects against the loss of all or most of your purchase money if you die shortly afterwards.

1. You don’t have to use all of your pot to buy an annuity

They can be used in combination with drawdown. Retirees who would prefer to have a slightly higher guaranteed income than they get from the state pension, can make up the difference by buying a relatively small annuity.

This could for instance be set at a level so that all essential life expenses are covered. The rest of the pension pot could then be put into drawdown. 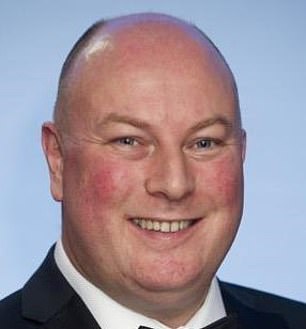 Gary Smith:  You don’t have to use all of your pot to buy an annuity

Another strategy is to ‘flex first and fix later’. The disadvantage of purchasing an annuity early in the retirement phase is that a chunk is taken out of the pot that could be earning future investment returns.

Moreover, as a retiree gets older they may be less inclined to manage the complexities and risks of drawdown and will give more value to the security of a guaranteed income.

With this in mind, the plan would be to take an income from drawdown until a certain age (which will vary widely according to individual circumstances), at which point the pot is liquidated for an annuity.

Yet another option for those who have built up larger pots with a view to retiring early is to buy an annuity to furnish a guaranteed income until the state pension arrives.

Someone at age 57 could use part of their pot to buy a 10-year fixed term annuity to provide a guaranteed income to take them up to state pension age, while drawing additional funds if needed from the remaining invested pot.

As savers can purchase more than one annuity over their retirement this does not stop them from also buying one in the later phase.

The ability to buy a fixed-term annuity for a short spell and then a lifetime product later on is also useful for those who think annuity rates have further to improve.

4. An annuity does not trigger the money purchase annual allowance

Just like the 25 per cent tax free lump sum, purchasing an annuity does not trigger the money purchase annual allowance.

This means that you can continue to contribute the annual allowance of £40,000 to a pension and benefit from tax relief.

You can buy a purchased life annuity from funds outside your pension pot – but that could be cash raised from the tax-free lump sum withdrawal.

Savers can invest a cash lump sum in return for a regular guaranteed income, some of which – as it is the ‘return of your lump sum’ – is not taxed.

This can also be useful for those who have utilised their pensions Lifetime Allowance and want to supplement their guaranteed income.

It is possible to include options that can protect your family on your death, although adding these options will reduce the level of starting annuity you can receive.

Where the annuitant wants to provide some protection for their children/grandchildren, they could include a guaranteed period, and this will ensure that the annuity is paid for a set period of time, regardless of whether or not they survive this period.

If death occurs pre-75 this is typically paid free of tax, with tax paid on death post age 75.