Time to grab a holiday bargain? First Britons jet to Spain as price of week holiday drops to £300

The first Britons jetted off to Spain today after Madrid lifted its ban on foreign tourists and opened its beaches in glorious 100 degree-plus heat.

Travel firms have slashed the price of a one-week holiday to £300 after Downing Street signalled it could bring in ‘travel corridors’ to 10 countries from July 4, with no 14-day quarantine on return to the UK.

The heatwave set to hit the UK next week will be soaked up by British tourists in Malaga and Alicante today as a small Ryanair fleet flies to the south of Spain.

Spain’s reopening after three months of lockdown comes as travel firms have seized on talk of ‘air bridges,’ and hacked down prices in an effort to tempt families and older passengers into a summer beach break.

A Ryanair jet taking off from Leeds Bradford airport this morning. The heatwave set to hit the UK next week will be soaked up by British tourists in Malaga and Alicante today as a small Ryanair fleet flies to the south of Spain. 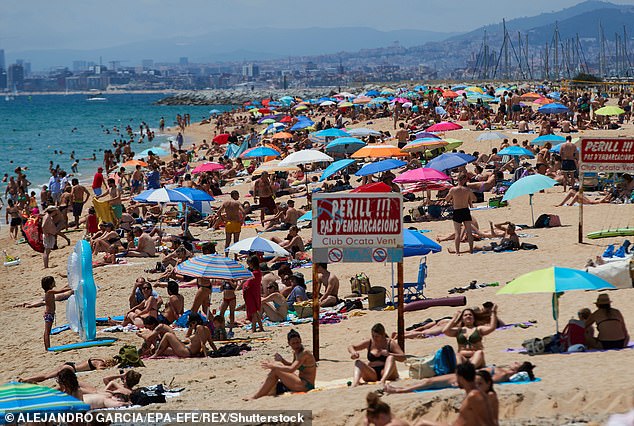 People enjoy the warm and sunny weather on the beach of Calella in Barcelona, Catalonia, Spain, 20 June 2020

Emma Coulthurst, of TravelSupermarket told The Telegraph that before June, the majority were searching for holidays from October, but now this is ‘July, August and September just like a normal summer.’

Madrid’s lifting of entry restrictions today coincided with the end of a state of emergency which means Spaniards and expats are free to travel round the country.

Spanish Foreign Minister Arancha Gonzalez has confirmed Brits will not be ordered to quarantine after threatening to make tourists arriving from the UK only self-isolate as a response to Boris Johnson’s quarantine imposition. 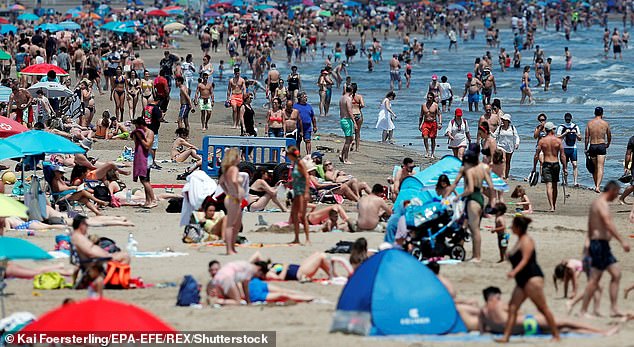 A series of new measures designed to minimise the risks of a new coronavirus outbreak are still in place, although they vary between regions as Madrid has let regional governments decide most of the new rules.

London City Airport reopens on Sunday after being closed to commercial flights for nearly three months.

The airport has introduced a series of new safety and hygiene measures, including enhanced cleaning, limiting terminal access to those with a ticket and mandatory face coverings.

Its first flight following the restart will be operated by Loganair on behalf of BA CityFlyer from the Isle of Man and is due to land shortly after 6pm.

Initial routes will mainly be restricted to those within the UK and Ireland, with services to Edinburgh, Glasgow and Dublin expected to return next month.

New routes to Teesside and Dundee will be launched on July 6 while flights to sunshine destinations such as Ibiza, Florence, Malaga and Palma are likely to resume in the coming weeks.

London City’s runway was closed to commercial and private flights on March 25 due to the collapse in demand and travel restrictions resulting from the coronavirus pandemic.

The airport has been available to Government agencies and the military during the crisis.

Facemasks have to be worn on public transports and in shops and other closed public spaces as well as on the street when social distancing of five feet cannot be guaranteed. People doing sport are among those exempted from having to wear facemasks.

Andalucia’s 400 anti-Covid-19 measures include a halving of the maximum number of tourists who can use hotel swimming pools and the closure of children’s play areas.

Governors in Asturias in northern Spain has told town halls in their area they have the right to limit the amount of time sunseekers can spend on beaches.

The Balearic Islands government is banning nightspots which normally cater for 300 people from opening.

The first British tourists reaching Spain today will be met with temperatures of up to 38 degrees Celsius (100,4 degrees Fahrenheit) in some parts of the country.

The hottest place is Seville and the popular tourist city of Toledo is going to be sweltering at 36 degrees Celsius (96.8 degrees Fahrenheit).

Temperatures in the Majorcan capital Palma were due to reach the mid-eighties at lunchtime today and Malaga on the Costa del Sol 28 degrees Celsius (82.5 degrees Fahrenheit.

Thermometers are due to rise, with an orange weather warning and predictions of 40 degree heat (104 degrees Fahrenheit) in place for some parts of southern Spain on Monday.

The early Spanish summer heatwave, expected to affect the UK from mid-week, is the result of hot African air reaching the country.

Weather agency Aemet has said: ‘It’s very probable that the high temperatures will persist during a good part of this week.’

Hidden thermal-imaging cameras at Spanish airports will automatically take tourists’ temperatures when they touch down.

And the beach experience will be very different for a lot of the holidaymakers who end up on the Costas. 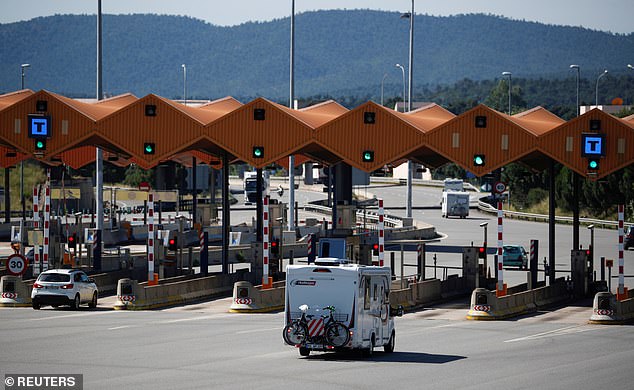 The Spanish-French border as Spain reopens its borders to most European visitors after the coronavirus lockdown coinciding with the end of the state of emergency in the country, in La Jonquera, north of Girona, Spain June 21 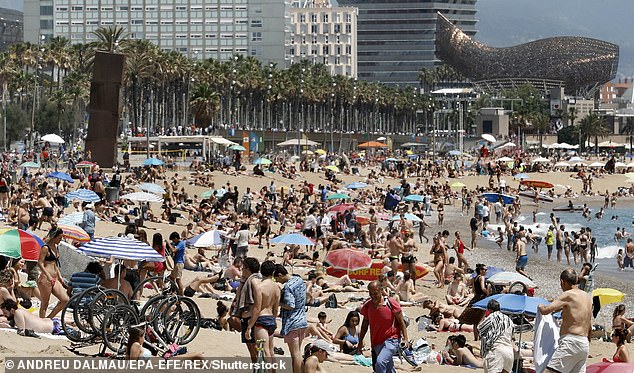 On the Costa del Sol, the holiday choice of three million Brits a year normally and home to an estimated 50,000 expats, an army of £1,700-a-month regional council-employed beach monitors will advise new arrivals about the new rules and call in police if their information is ignored.

In Fuengirola large blue arrows on the pavement and smaller symbols painted alongside them encourage pedestrians to follow a sea promenade one-way system.

People heading east walk next to the beach and those walking west the opposite side of the road by the shops.

Games with balls like football and beach tennis have been banned as well as lilos and other inflatables.

The town hall is also replacing its traditional old pedal boats hired out to groups with individual versions due to arrive later this week.

Javier Hidalgo, Fuengirola Town Hall councillor for Beaches, said: ‘British holidaymakers who come here this summer are going to find beaches which are very different to those of last year.

‘We have increased security and cleanliness so that locals and visitors feel as comfortable as possible.

‘The sand is being cleaned much more frequently than before.

‘As well as the 15 beach monitors the town hall is employing, the regional government has employed 56 monitors to improve security.

‘Children will be allowed to take buckets and spades on the beach although the idea is they don’t share their toys with other youngsters or leave them lying around on the sand. 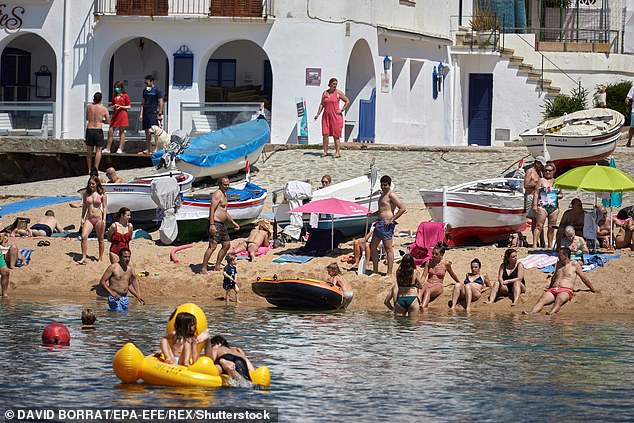 ‘We’re going to try to make sure there’s no ball games or the beach or other activities where we can’t control social distancing, first with a warning from the beach monitors and then by getting local police involved if necessary.

‘A lot of things are going to be new to foreign holidaymakers and the beach monitors’ primary function is to inform people about the changes and we hope they will show personal responsibility and comply for their wellbeing and everyone else’s.’

Veteran beach worker Fredy Campos, whose adopted resort has been more like a ghost town for the past three months after being emptied of its normal throng of British tourists, says he is ready to receive them with hand gels to make sure they enjoy their holidays and stay safe.

The 39-year-old father-of-one, who is originally from Bogota in Colombia but has been renting sunbeds to British tourists at El Cielo beach in Fuengirola for the past 20 years, would normally be turning holidaymakers away right now after reserving all his 120 loungers.

Since re-opening last Saturday he has averaged around four customers a day for the 80 sunbeds he now has to rent because of social distancing rules.

Fredy asks customers to hand-wash before they hand over their £5.40 (6 euros). He disinfects sunbeds at the start and end of each day and between each use with a chlorinated cleaning product.

Tourists wanting to top up their tans have to lay their towels on new plastic coverings over the sunbed mattresses he changes every time a new customer comes along.

He said yesterday: ‘I’ve been doing this job for 20 years and things have never been as bad as they are now.

‘The 2010 Iceland volcano ash cloud caused flight chaos and stopped tourists from coming but we still had the ones who were stranded here.

‘We depend on tourism and I hope British holidaymakers come. Everything I am doing this year is designed to make sure they feel pampered and stay safe and enjoy their stay even if things are different. 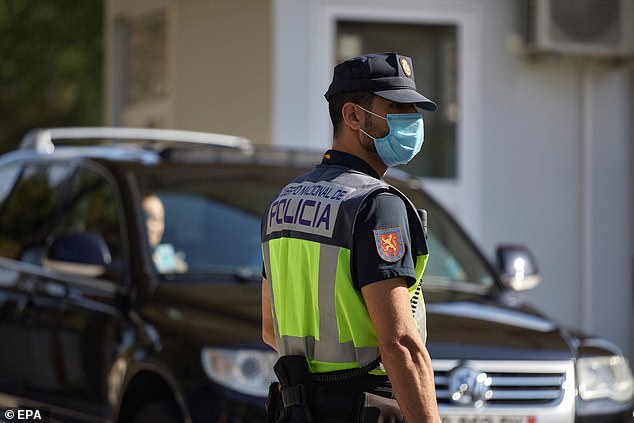 Spanish National Policemen control at the Spanish – French border after reopening in El Pertus, France, 21 June 2020. Spain has opened its borders for travelers from most of Europe after lifting the State of Emergency and lockdown to stop the spread of the coronavirus

‘Fuengirola is a beautiful place and the spot I’ve got on the beach is fabulous in the summer when it’s always sun and blue skies.’

Brit favourite Benidorm will be making tourists book their spot on the sand online or at on-site reservation stands, although the reservation system is yet to start functioning.

Holidaymakers not opting for a beach bar sunbed will have to stay within one of 5,000 13x13ft squares marked out on its famous Poniente and Levante beaches – colour-coded blue for general use or red for the over-70s who have been allocated designated areas.

Mayor Toni Perez says the so-called ‘Benidorm Beach Safety’ plan is a response to social distancing rules which mean just over 25,000 people will be able to enjoy beaches that in peak season normally cater for around 40,000 sunseekers.

But the shock system was criticised by locals and expats when it swung into action last Monday as the Costa Blanca resort opened its beaches for the first time in three months.

One told a local paper: ‘They’ve filled the beach up with sunbeds and the old folk cast out like in a care home.

‘Paying £9 you get a sunbed and a sunshade. If not you get put in a square like a pig.’

Expat Lisa Browning, 35, from Gillingham, Kent, added: ‘People will try to do as they’re asked but it’s going to be very difficult when the beaches start filling up.

‘Children especially naturally want to play with other kids and that’s going to be difficult. Being stuck inside a square on the sand is ridiculous.’

British tourists venturing north to one of La Coruna’s urban beaches will have to pass through one of 14 arches with sensors to reach the beach.

They will enable the city council to inform locals and holidaymakers in real time how many people are on any of its six beaches via information screens doted around the Atlantic surfers’ paradise.

Silgar beach, in the same region of Galicia but near Spain’s border with Portugal, has also opted for a Benidorm-style divider system.

Visitors will be greeted by nearly 800 95 square foot spaces marked out with wooden posts and colour-coded ropes.

One space is for two people but the ropes can be moved to accommodate larger groups wanting to share more than one space.

Hostesses of the kind normally found in upmarket eateries or hotel breakfast receptions will help people reach their allocated spot on the beach, which this year can only cater for around a half of its normal capacity because of social distancing rules.

During Spain’s state of emergency more than 9,000 people were arrested for breaches of state-of-alarm regulations. The number of fines has been put at a staggering 1.2 million.