Timo Werner failed to tap into an empty net from a few yards out during Germany’s shocking 2-1 home loss to North Macedonia on Wednesday.

On a humiliating night for Joachim Low’s side – who went down to the side ranked 65th in the world – Werner was given a golden chance to put Germany in front with 10 minutes to play with the scores locked at 1-1.

Ilkay Gundogan did well to sprint down the left and fashion a simple chance for the Chelsea striker, who got his feet muddled up inside the penalty area and the shot went wide. 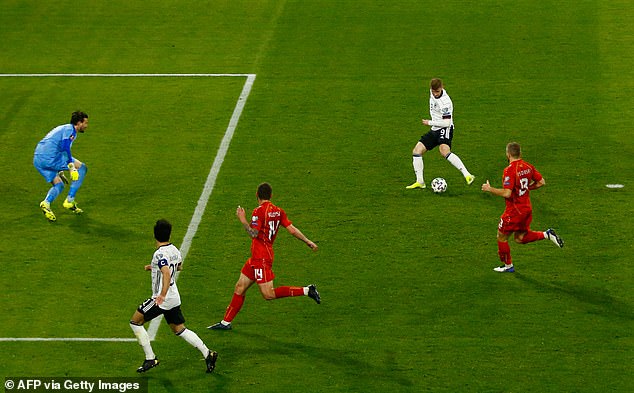 With the scores locked at 1-1 with ten minutes to play, Werner failed to tap in a few yards out

Germany went on to concede to Eljif Elmas’ goal five minutes later to suffer just their second World Cup qualifying defeat since 1985 – the other being England’s 5-1 win in Munich back in 2001.

Football fans mocked the 25-year-old forward for missing the simple chance, with one fan claiming Werner is the worst forward in the Premier League era since former Chelsea striker Alvaro Morata.

One Chelsea fan tweeted: ‘Timo Werner is making it difficult to defend him again lol’ while another claimed the German striker ‘is not a serious footballer.’ 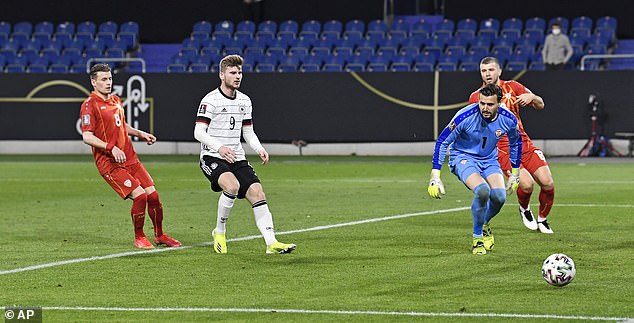 Meanwhile, one Liverpool fan posted: ‘Klopp really looked at Werner and said, “nah I’m alright”’ in relation to Werner being linked with a move to Liverpool before joining the west Londoners.

The miss is the latest blunder in a difficult season for the 25-year-old, who has struggled in front of goal since joining Chelsea for £53million from RB Leipzig last summer.

Werner joined Stamford Bridge having scored 34 goals in 45 matches for Leipzig the season before, but has just five Premier League goals in 28 appearances for the Blues. 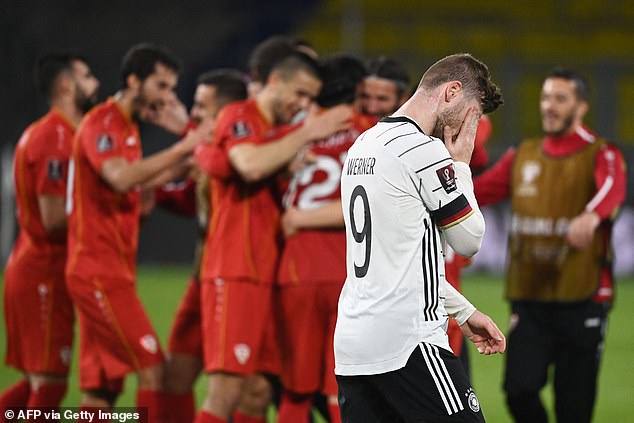 The German forward’s form in front of goal has failed to pick up even after the arrival of countryman Thomas Tuchel as Chelsea manager following the sacking of Frank Lampard.

Werner has one Premier League goal in his last 20 top-flight fixtures, producing just four assists during this time as well.

The striker’s form for Germany has hit a downward curve as well, as Werner has now failed to score in his last four international matches. 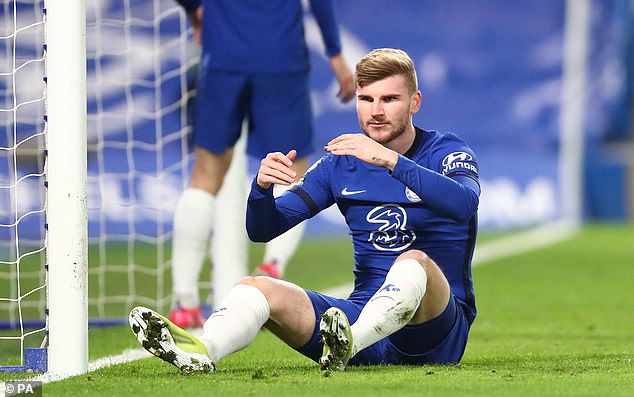 £47.5m signing Werner has struggled in front of goal for Chelsea throughout this season

His overall goalscoring record stands at 15 goals in 37 international caps for the 2014 World Cup winners.

Manchester City midfielder Gundogan levelled for Germany from the penalty spot mid-way through the second period, before Werner missed his glorious chance on 80 minutes. 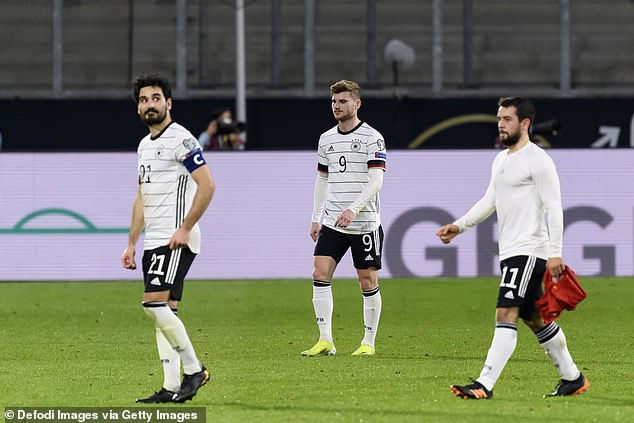 And North Macedonia reclaimed their lead in dramatic fashion through Napoli midfielder Elif Elmas, with the visitors even hanging on to the victory following eight minutes of stoppage time.

The visitors could meet Germany again in this summer’s European Championships after North Macedonia claimed their spot in the major tournament in the back end of last year.

They have been placed in a group with the Netherlands, Austria and Hungary for the summer tournament.