When you think of dating app, Tinder, long term commitment is not the first thing which springs to mind.

However, for Perth couple, former maths teacher Christie McClennan, 40, and firefighter Adam Fahey, 43, it was love at first swipe.

Thirty minutes into their first date on a Tasmanian beach, the couple knew they had found ‘the one’.

After moving interstate to be together, starting a business named ‘Tinderly’ in honour of their love and travelling around the world, the couple now has an adorable 14-month old baby named Sasha. 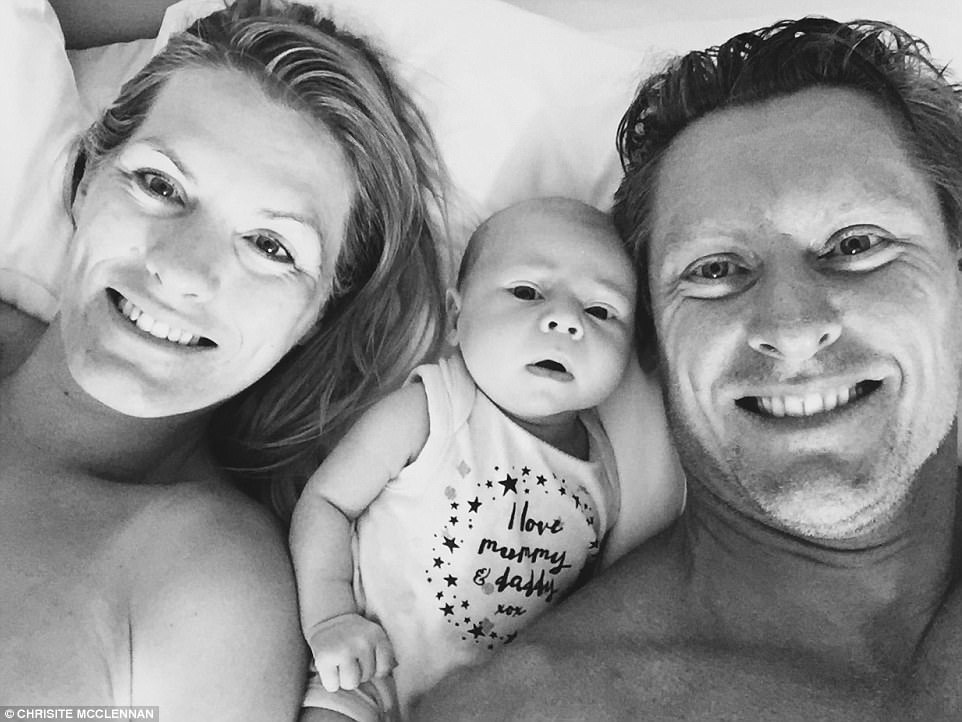 Living in Melbourne, Christie was a 36-year-old maths and psychology teacher with a passion for fitness.

In December 2013, she was visiting family in Tasmania over Christmas and joined Tinder after a heart to heart with her good friend Jo.

Christie says, ‘I was on there for the sole purpose of finding the man of my dreams, if nothing else. So I did have high standards’.

She says, ‘I’d had a lot of long term relationships, and as the clock was ticking, I just had no more time for that. So my experience of love before, I had never really come close to finding the right guy’.

In spite of this, she remained positive and was determined to find the man of her dreams.

Christie wrote a list of the characteristics she wanted in her perfect man- taller than her in heels, water sports hobby, hot body and broad shoulders. Did such a man even exist? 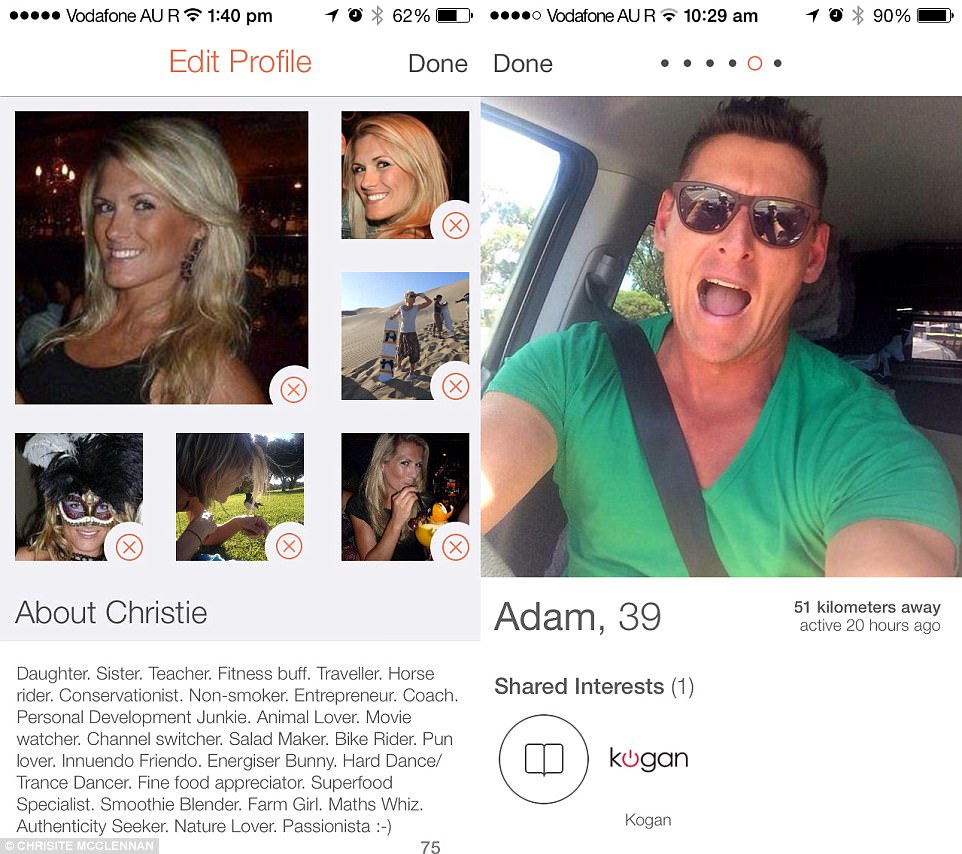 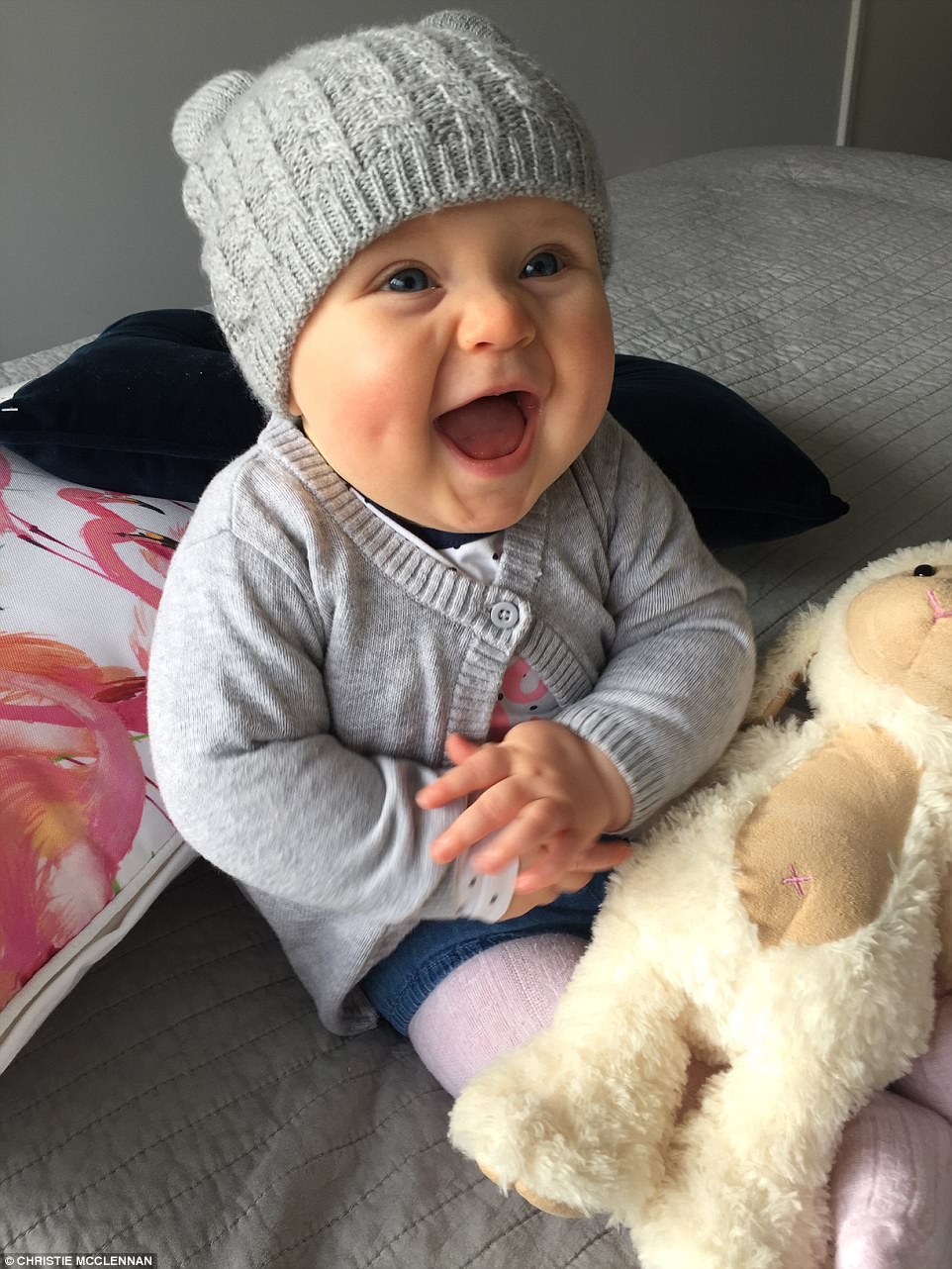 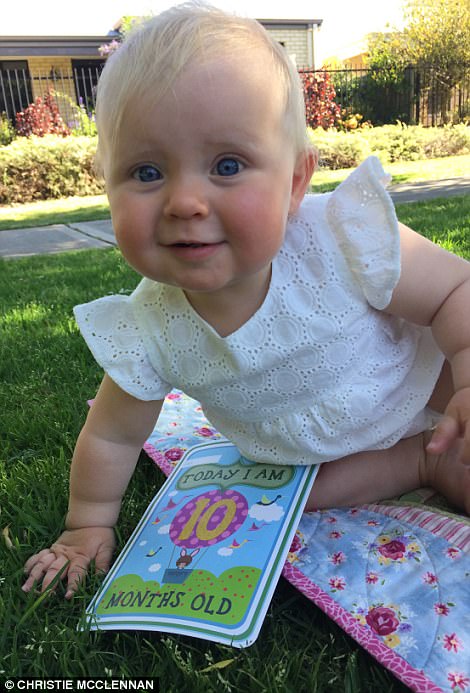 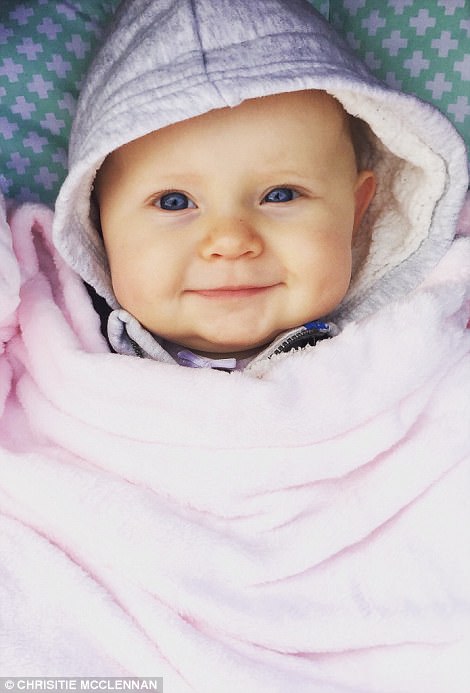 Tinder baby: Baby Sasha aged 10 months in a park (left) and swaddled in a blanket (right)

While visiting her family near Launceston, Christie had no idea that the perfect man was just around the corner, also visiting his loved ones for Christmas.

After only three days on Tinder, she swiped right on Adam Fahey, a 39-year-old firefighter who was also in Launceston visiting family. Despite being a firefighter, Adam wasn’t about to put out sparks on this Tinder match.

She says, ‘I had only swiped to the right like three or four times and had a couple of pretty lame conversations with a couple of people and just was really bored, and as soon as I was matched with Adam, he had already picked me, so when I swiped, we were matched instantly.

As soon as he picked me it was just on, we were just like messaging flat out. It was Boxing Day by this stage’. She says, ‘He was my Christmas present’. 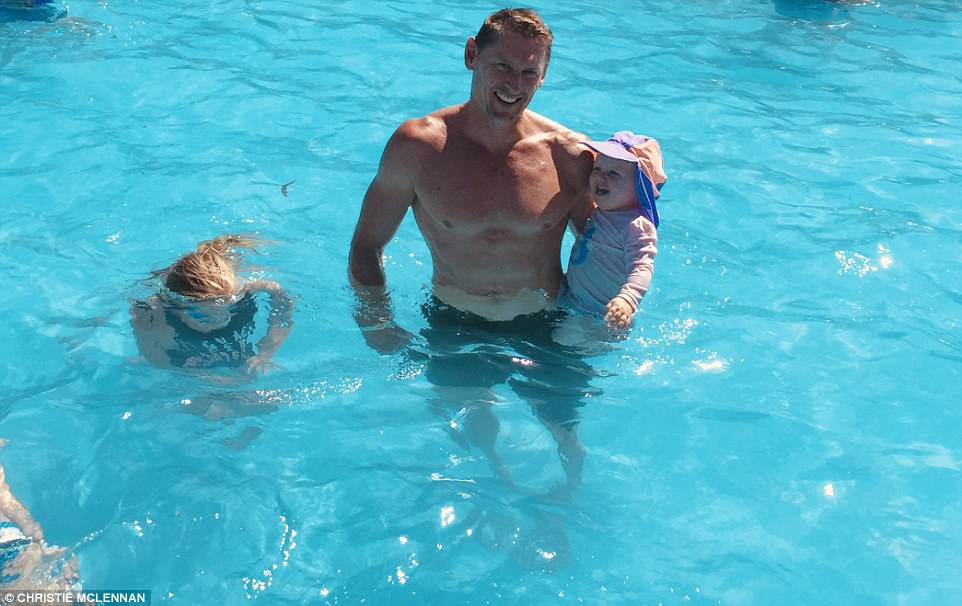 Fun in the sun: Adam Fahey spends time with daughter Sasha at the swimming pool 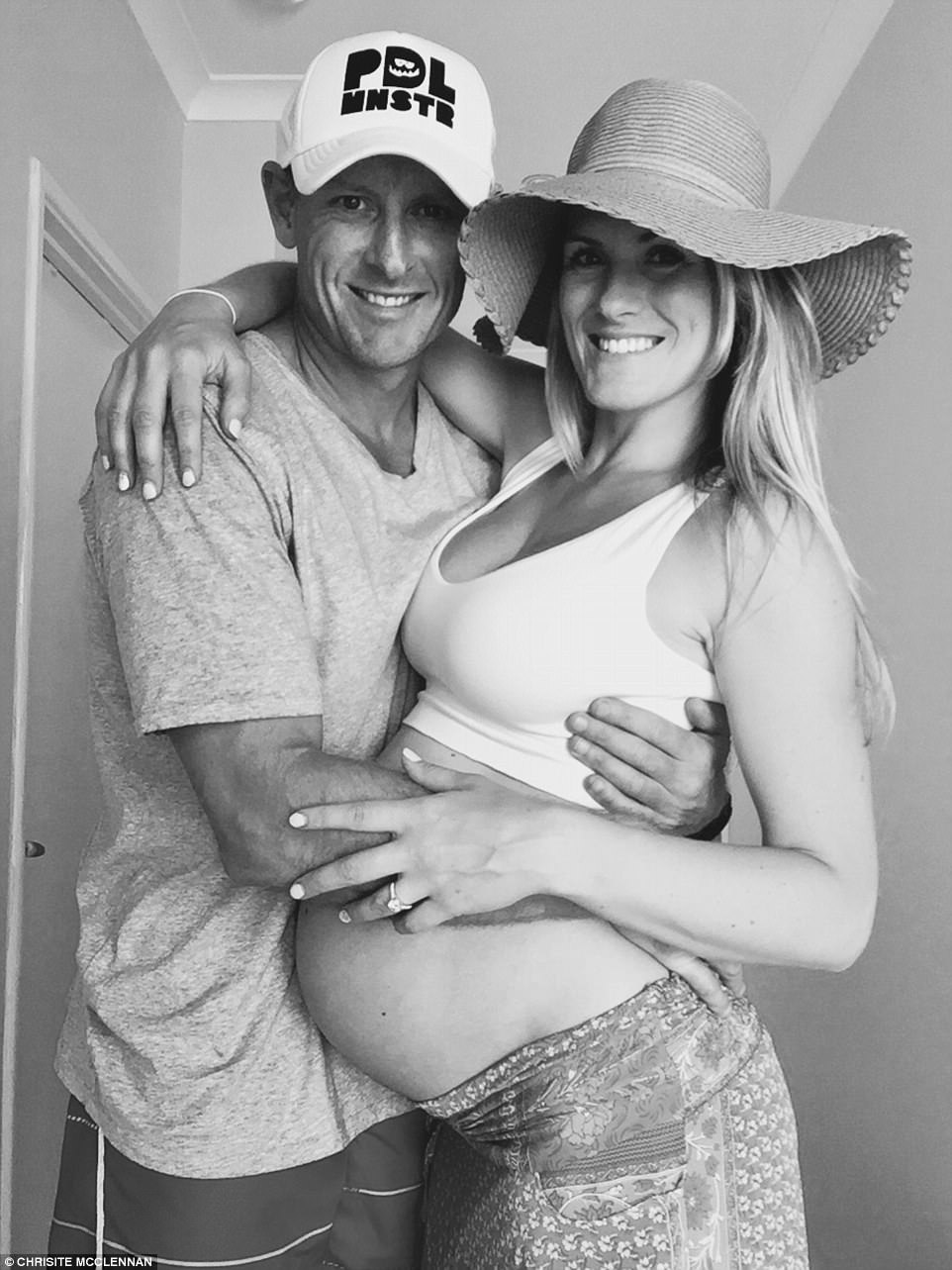 Commenting on their first meeting, Christie says, ‘It was also lovely to meet someone later in our life as we were both not scared of commitment’ 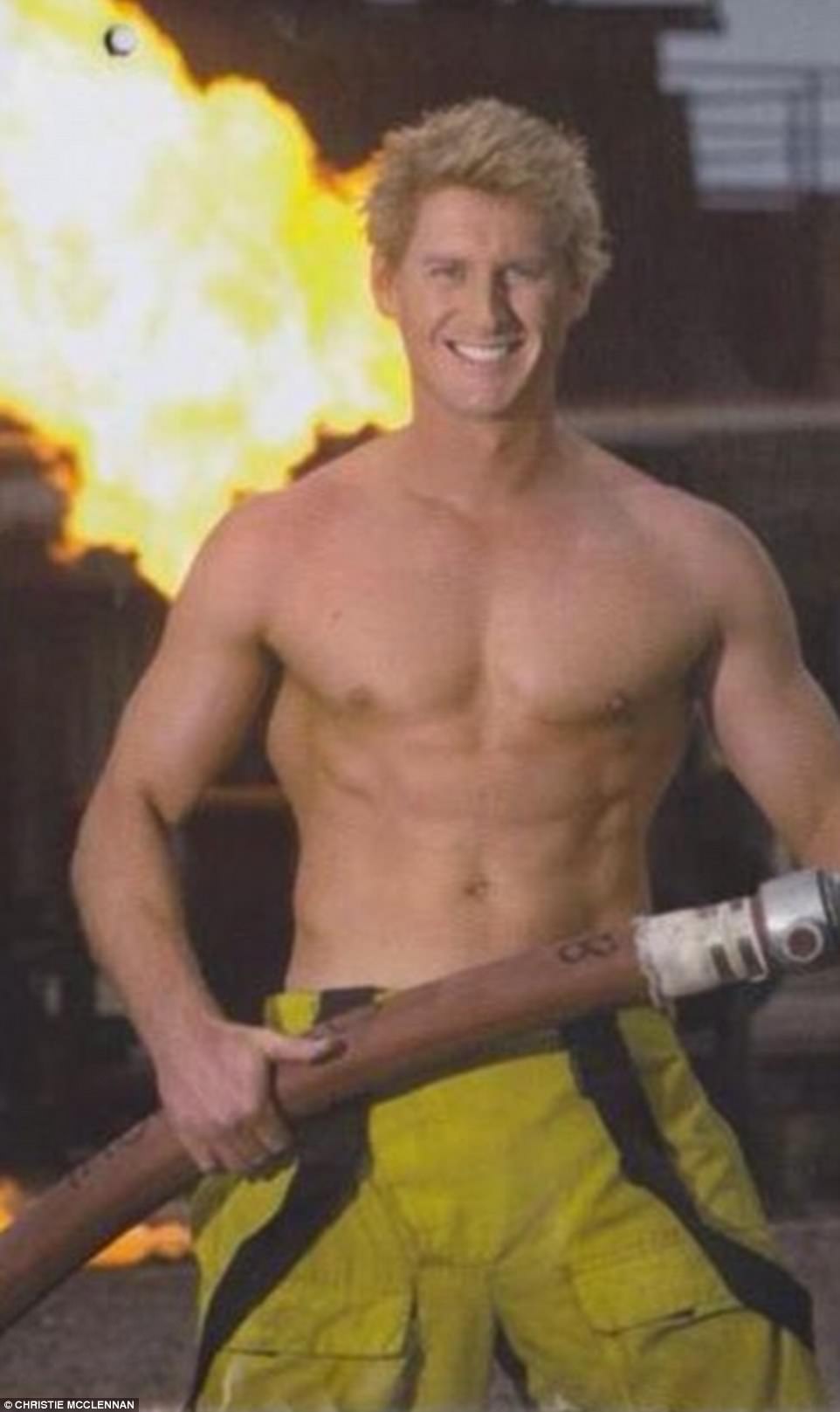 The pair chatted on Tinder and arranged an afternoon date on the beach. Adam rocked up in a fluoro pink singlet after visiting his Nanna for a cup of tea that morning.

The chemistry was immediate. After 30 minutes, they both knew that they had found ‘the one’.

Christie says, ‘We looked at each other and almost like shook our head and kind of went, I can’t believe I found you, you’re the one I’ve been waiting for’.

That day, they discussed if they were both open to the idea of getting married and having babies. At the time, Adam was already the father to a 6-year-old daughter from a previous relationship, so Christie knew he was Dad material.

Commenting on their first meeting, Christie says, ‘It was also lovely to meet someone later in our life as we were both not scared of commitment’.

They felt such a strong connection that they told each other ‘I love you’ the very next day, as Christie was on the plane home to Melbourne and Adam made his way back home to Perth.

Both Christie and Adam were born in Hobart and maybe it was fate that they would eventually meet in Tasmania.

The couple later learned that their parents had known each other for 10 years. Christie’s Mum and Adam’s Dad both worked as cooks in the kitchen at North East Memorial Hospital in Scotsdale. 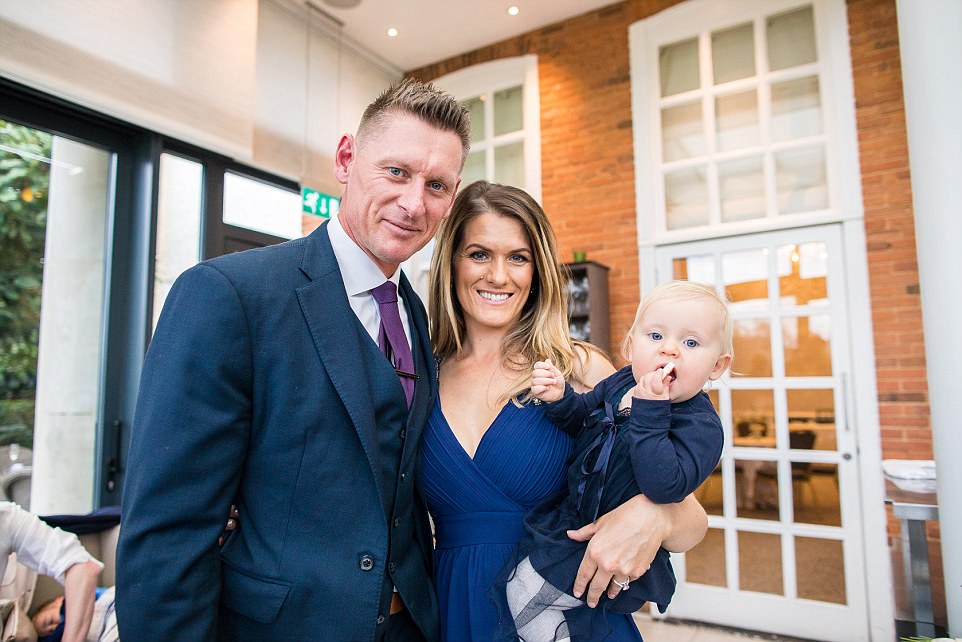 Even stranger, Christie says, ‘We actually figured out later, that we were actually both born in Hobart but moved away. And we actually figured out that my Dad had serviced his Dad’s car, my Dad was a mechanic, back in, like before we were born. Probably 50 years ago or something. So yeah, we were meant to be together’.

After four months of long distance dating, including visits and Skype calls the couple decided to move in together.

Christie and Adam drove West across the Nullarbor from Melbourne to Perth, to start a new life together.

Commenting on the relationship, Christie said, ‘we were always high fiving one another just cause we were so stoked that we’d found each other’.

They were so grateful to have met on Tinder, Christie says ‘we started a business together, we called our company Tinderly consulting, in honour of Tinder, because we’re forever grateful’. 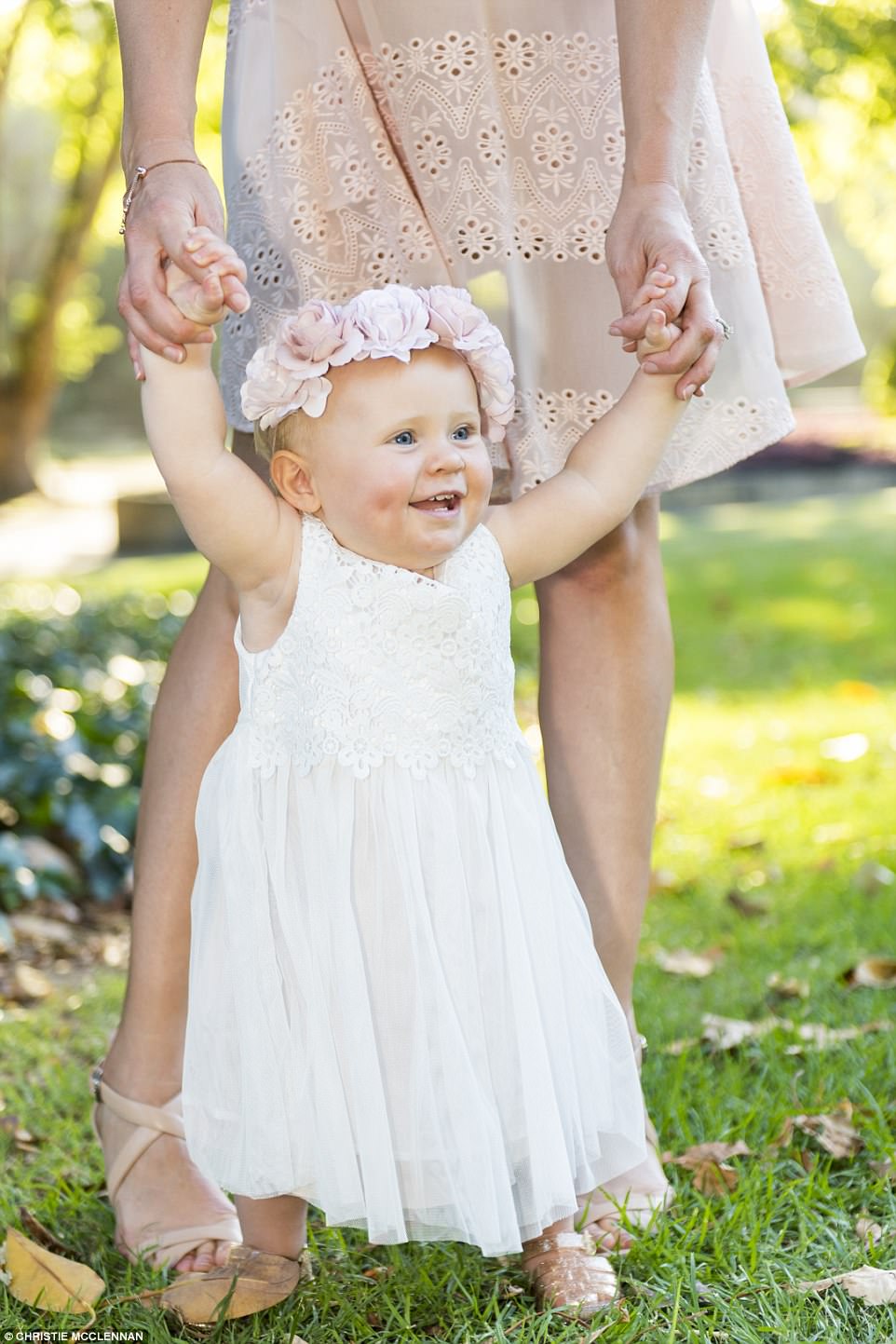 Over the next few years, the couple travelled all over the world, going to Ibiza, America. In 2016, they took a helicopter and got engaged on a cliff top in New Zealand.

Christie said, ‘We landed there and then he proposed on top of there’

The couple now have an adorable 14-month-old daughter named Sasha. They call her their ‘little unicorn’, for her mischievous, affectionate personality.

Christie is now a network marketer and Adam is still a firefighter.

Together, the Tinder couple are madly in love and live as a family in Perth with baby Sasha and Adam’s 10-year-old daughter from his previous relationship. Christie says about Adam, ‘he’s an amazing Dad’.

Christie shares her top three tips for finding love online. She says, ‘don’t say yes to too many people. Know what you want beforehand’ and ‘be clear on what you want’.

Firstly, she says that as a couple, they are committed to treating each other with respect and when disagreeing, they never threaten to end the relationship.

Secondly, Christie says that they make sure that they ‘be strong’, to support each other in any circumstance. She says, if one person’s weak, or not really going well, the other person can be strong for them’. And finally, Christie says, never settle for mediocrity.