A singleton was stunned when her Tinder date flew into an ‘anti-Semitic’ rage over the cost of their night out – so she got revenge by sending him a bill for her gas.

Erica Siepker, 29, had been chatting to Phillip for a few weeks after matching with him on two separate dating apps and felt like he seemed nice.

When he asked her on a first date last month, Erica was honest and said she was too strapped for cash to drive an hour away to meet him so he offered to pay for her.

On the date, Erica claims Phillip said she owed him a beer but two days later changed his tune and demanded she cough up – so she transferred him $7 for the beer and the $1 tip.

However when the relationship didn’t progress further, Phillip turned nasty and branded her a ‘half Jew’ for only paying $8 towards the date – and sent ‘nose emojis’ as a racial slur.

Professional diver Erica blocked the ‘anti-Semite’ and later got her own back by sending him a bill for $25 for ‘gas, wasting my time and burdening me with the knowledge of your existence’. 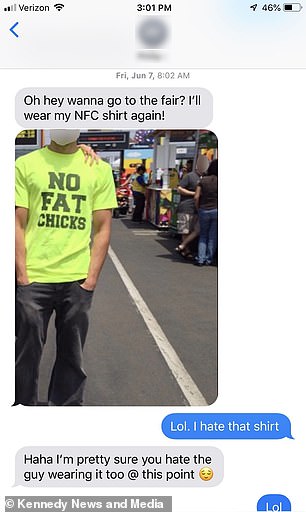 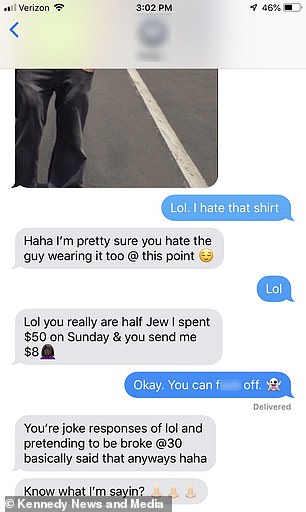 Erica, from San Diego, said: ‘I don’t know if he can even admit to himself what happened, but it’s not my problem. The trash took itself out, as I like to say.

‘I am half Jewish. It comes up in conversation a lot because I am adopted and found my birth father when I was 19 and I learned I was half Jewish then.

‘I also did 23andme and I am 49.9% Ashkenazi Jewish. It tells people a lot about me so when I’m getting to know someone it comes up. The fact that I am Jewish must have really struck him.’

Despite it being a problem that he lived far away, Erica claims she had fun on their initial date and continued chatting to Phillip for five more days.

However she claims he was insecure and constantly fretted that she was going to ‘ghost’ him.

The final straw was when he revealed he owned a ‘no fat chicks’ t-shirt, which left Erica annoyed – sending Phillip into a rage. 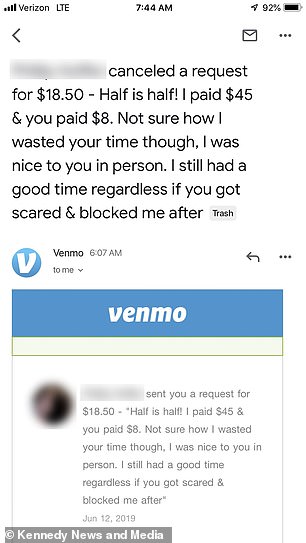 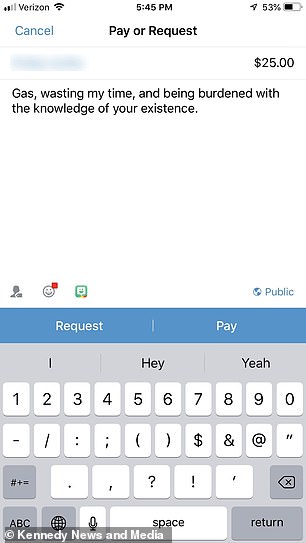 After blocking Phillip on the dating apps, Erica sent him requests for money via payments app Venmo 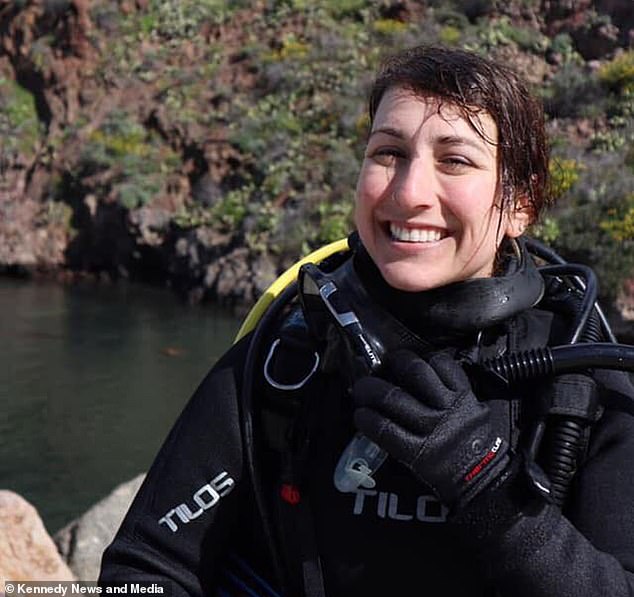 Instead of paying her on Venmo Phillip cancelled the request and instead publicly paid her 25 cents for ‘condoms, lube and half of the hotel room’

Upset and angry at the blatant anti-Semitism, Erica blocked Phillip and sent him the tongue-in-cheek bill via mobile payment service Venmo asking for him to cover her gas and wasted time.

Erica said: ‘The nose emojis made it even worse. I had not said anything rude to him other than that I hated the [no fat chicks] shirt but it was a rude comment on his part to make before that.

‘He shouldn’t attack part of me, especially a bit I like. When I was younger I was self-conscious of my nose but as an adult I realised I liked it.

‘Luckily it wasn’t a huge insecurity point for me but it was shocking that he could go that far.’

Although she claims she never expected him to pay the Venmo bill, she found the response ‘cathartic’ after his ‘anti-Semitic’ insults.

Erica said: ‘The text I got on the final day was a picture of him in the ‘no fat chicks’ t-shirt. He hadn’t mentioned it at all and I had no idea he owned a shirt like that or anything like that.

‘He was already annoying me because he was texting me so much and harassing me about ghosting him even though I never ghosted or rejected him, so when he sent the picture of that shirt I was already frustrated. 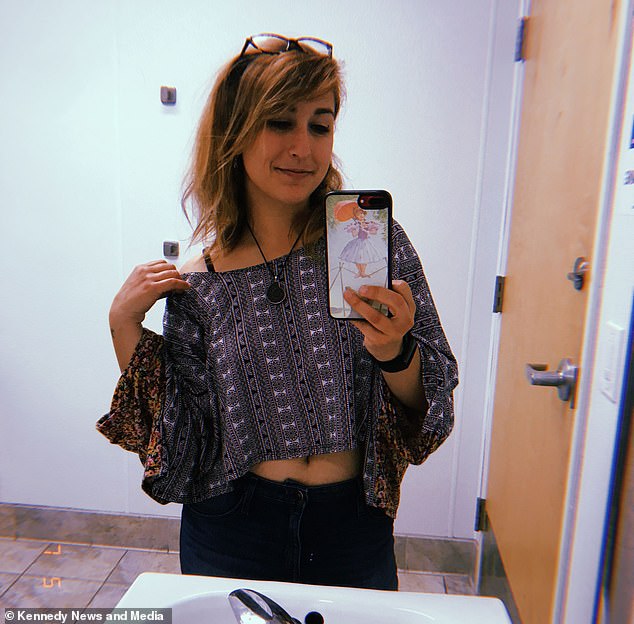 ‘I was just like, okay, I’m not going to tell you I like your shirt when I don’t. It was very bizarre.

‘Then he said that comment, which was very anti-Semetic and I was not expecting that.

‘I was surprised at how much it affected my emotions even though I didn’t know him very well.

‘I’m not usually a very sensitive person but he sent that text at 7 o’clock in the morning and I was at work. I was thinking about it all day, just, wow, that hurt.

‘I didn’t know him at all but I just told him to ‘f*** off’ and sent him the ghost emoji and blocked his number. I blocked him right then.

‘I really wanted to say something else because it did ruin my day. I thought the Venmo request was really funny and it was actually therapeutic for me too.’

However, her rejected date cancelled the request and instead publicly paid her 25 cents for ‘condoms, lube and half of the hotel room’ – which Erica claims was stated to embarrass her.

Erica said: ‘[Even after all of this] he thought he was in the right still. I don’t understand.

‘It was mostly the insecurity of me ghosting him. He said he had been ghosted five times in the last month.

‘I actually said something really nice to him. He said he didn’t believe anybody any more, even if he liked them. I said, don’t worry about it.

‘They probably all did you a favour. He said, ‘wow, kind words. It just makes being a genuine, sweet guy harder’. That’s what he said.

‘I was like, ‘okay, wow’. I assume he still thinks he’s a genuine sweet guy.. He doesn’t seem to introspect or think about situations from the other side at all. He is just very narrow minded.

‘I feel like people who are going to insult somebody like that don’t deserve any of my energy.

‘I guess it’s not worth having some argument that goes nowhere and it seemed like that was going to be the case. He’s not worth my time.’